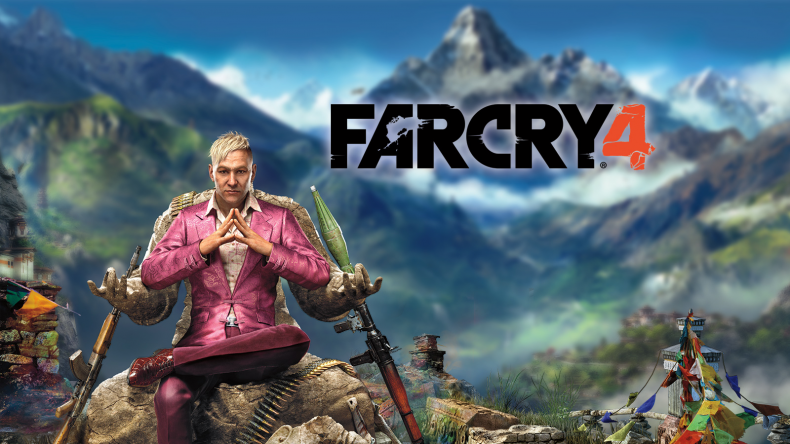 Please note that all impressions are based on a select portion of a game that has not been fully released yet. Much is still subject to change, and this does not necessarily denote the quality of the finished project. As always, opinions in the article are subjective to the writer.

Far Cry 3  was, hands down, my favorite game of 2012. Everything about it was just fantastic to me. The tight, deep, and varied gameplay. The lush and beautiful environments, the wildlife, the freedom. Just an all around fantastic game.

Flash forward to today, and I was able to play a brief hands-on demo for the PS4 version of Far Cry 4  at a Ubisoft fan event in Downtown Los Angeles.

Before the demo began proper, I was informed I would be infiltrating an enemy compound, and the goal was to liberate it by killing every enemy. I was then prompted at the start menu to choose one of three approaches: stealth, assault, and….flying? I asked the kind Ubisoft developer about the third option and was informed that ‘flying’ will set you up with one of those Road Warrior-style mini-copters like the one shown during the Far Cry 4  stage demo during the Sony press conference. I played all of Far Cry 3  using stealth as my modus operandi, and my time spent with the Far Cry 4  demo would be no different.

When the game finally loaded (the load times were loooooong), I first looked around at the environment. It looked incredible. The tall grass was swaying in the winds on the precipice, trees rocked back and forth ever so slightly. The rocks up the cliff to my left showed incredible detail. It was so gorgeous to look at that I had to look down and confirm that I was playing on a PS4.

The tall grass was swaying in the winds on the precipice, trees rocked back and forth ever so slightly. The rocks up the cliff to my left showed incredible detail.

After taking in the striking imagery and visuals, I set off to attend to the task at hand. Kill every em effer  in the compound. I was able to use a grappling hook to ascend the cliff face and approach the compound from the rooftops. I scoped out a few enemy locations and, like in Far Cry 3, I tagged the ones in my line of sight so I could track their movements while I attempted to stealthily make my way to disable the alarm.

I gained ground, bounded over to a garage, and killed the enemy working underneath a car inside. He never saw me coming.

An enemy I didn’t see approached my right, and almost caught sight of me. I immediately aimed down the sights of my crossbow and shot an arrow into the enemy’s head with a “thunk.”

Well, that’s where all hell broke loose because the AI is definitely not what I am used to. Another soldier noticed the dead body and immediately began pursuit. I tried to get a quick shot off, missed, and wound up alerting another guard. The alarm sounded and it became a full-on manhunt.

I climbed back up on to the roof of a nearby building, trying to pop up and take shots when I could. After getting tagged a few times I was prompted to heal so I did. At this point, the crossbow wasn’t working for me so I instinctively pressed the triangle button and switched to my secondary weapon, a sniper rifle. I was able to take out a few enemies this way, but missed far too many because I was getting shot at while trying to line up my own. I retreated further back on the roof and noticed an enemy coming around the side of the building I was perched on. When he was near, I jumped down and sprint-stabbed him with my melee button (right thumbstick).

He dropped an assault rifle! Now we’re in business…

I played a bit of cat and mouse with the rest of the enemies, ducking in and out of cover. The cover mechanic was the ever-popular snap-aim, so when I aimed down my sight, I would pop up from cover and take some shots.

I knew that was it. My last hurrah was imminent. I made my way to a jeep-mounted machine gun and shot down the helicopter in a blaze of glory, liberating the compound and ending the over-all-too-soon demo.

Eventually all of the enemies had been felled. A helicopter approached and started trying to rain bullet-y death on my location. I ducked in and out of a few buildings trying to take shots when I could, but I was taking a ton of damage in the process. So much so that I used my whole stash of precious health needles. I knew that was it. My last hurrah was imminent. I made my way to a jeep-mounted machine gun and shot down the helicopter in a blaze of glory, liberating the compound and ending the over-all-too-soon demo.

While it wasn’t precisely the kind of exacting finesse I usually bring to these types of games, it’s clear that Far Cry 4  is more (or less) of the same great gameplay that I love from Far Cry 3. Bolstered by incredibly intuitive controls and stunning graphics, fans of Far Cry 3  will feel right at home with the series’ latest iteration.

If I had one concern at all, it would be that the game plays a little too much like Far Cry 3, which might turn off some players who weren’t fans of the previous entry (yes, they do exist). Not me though—I’ve got my copy pre-ordered and I’m anxiously awaiting November 18 to return to Kyrat.

Sean is a semi-retired hardcore kid, semi-grown up and transplanted from his original home of New York to Los Angeles. A lover and critic of movies, music and video games, Sean is always quick with an opinion, a heaping dose of snark, and a healthy dose of pragmatism. PSN & Live Gamertag: N2NOther
You might also like
E3 2014Far Cry 4PC