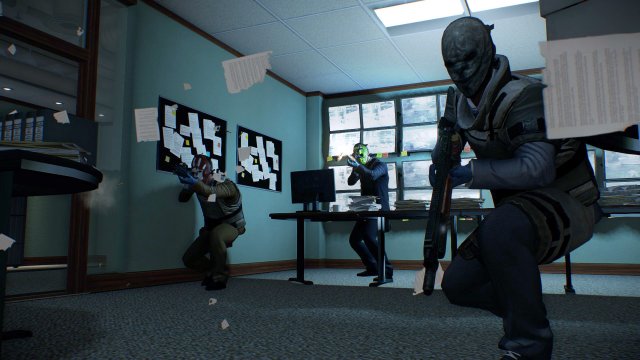 I got a chance to play the incredibly anticipated Payday 2, having downloaded the beta, along with the full retail version. The original, Payday: The Heist saw tremendous success on the PC, and now Payday 2 will be coming to PC, Xbox 360 and the PlayStation 3.

I may not be a PC gaming veteran, but I donâ€™t need to be to have an incredible time with Payday 2. At the beginning of the game, thereâ€™s little information given to teach you the basics (unless I missed it), you just figure it out yourself, which I liked. Iâ€™ve always found the best way of learning how to play a game was diving into the deep end, instead of a 10 minute tutorial which bores you to death.

Customization is quite big in Payday 2. Itâ€™s not important to the game, but youâ€™ll have many options to customize your weapons and your character. Youâ€™re able to purchase new guns and attachments for your weapons with the â€˜spending moneyâ€™ you have received from previous heists. This can turn your average M16 into a diabolical weapon, which will plow down your enemies. Youâ€™re also able to customize your characters mask, which covers his face during heists. You wonâ€™t see your own mask in-game, butÂ your fellow thieves will. As you level up by completing heists, you’ll unlock more weapons, masks and more, although you will still have to purchase them using your ‘spending money’. Also implemented is a tree of skills, similar to Far Cry 3 and the Borderlands franchise. There are 4 separate trees, all of which specialize in different areas.

The first treeÂ of these trees is theÂ Mastermind. If you pick this tree (you can pick all of them), you’ll unlock a health station which will give you and your teammates health. This health station can only last 4 uses until itÂ vanishes.Â The Mastermind can also get other abilities from the tree, such as increased stamina. He’s a good all-rounder, and the health definitely comes in handy. The Enforcer is the Brute tree. You’ll get an ammo bag as equipment if you pick this tree, and if you want to cause chaos, this one’s for you. Like the health station, the ammo bag will only last 4 uses until it disappears.Â Being able to carry bags faster can also be gained as the Enforcer, which makes the class even more appealing. The Ghost is all about stealth; getting in and out withoutÂ triggering the alarm. Civilians and enemies will find you less suspicious (a skill you can buy on the Ghost’s tree), make it easy for the Ghost to get inside without making a mess. TheÂ jammer will be put in your equipment once unlocking this tree. It will interfere with cameras, cell phones and more, making itÂ harder to be caught.Â The last skill tree is the Technician tree. Once you have unlocked this tree, a trip mine will be put in your equipment. Take in mind you can only have one of these pieces of equipment, because let’s be honest, with all of them it would be too easy. Payday 2â€™s main feature, Crime.net has an online and offline mode. Once in Crime.net, youâ€™ll be given the choice of which heist to carry out. These heists canÂ vary from a stereotypical bank heist, robbing a jewellery store, or just causing havoc in a shopping mall, all of which are insanely fun. AfterÂ completing the mission objectives, such as stealing 3Â bags of jewellery, you can then escape, if you can make it to the getaway vehicle that is. If you kill innocent civilians throughout your heist, itÂ will cost you a sum of your total money earned. Mission objectives are different and can change. If you play the same level again,Â other elementsÂ will be different too.Â TheÂ AI security guards will be in different positions, the vaultÂ can be moved, or there might not be a vault at all. Police assaults occur during heists. This is when the Police/Swat etc. become more aggressive and attempt to move in on you and your teammates.

The gameplay in Payday 2Â is very smooth. The recoil on the gunsÂ is similar to that of theÂ Battlefield series, which made the experience feel more realistic.Â There’s no delay at all after pressing keys/buttons or moving your mouse/analogue sticks.Â The game feels near perfect when you’reÂ turning, shooting, or sprinting. IÂ never felt out of controlÂ or annoyed due to the gameplay mechanics.Â The smoothness is the same online as it is offline. No to little no lag is the usual experience, even when playing with people from afar.

Playing solo can be frustrating at times, as your AI crew members will be helpless on occasion. However, they will revive you once youâ€™ve been downed, eventually. Although playing alone is enjoyable, it doesnâ€™t come close to the online play. Of course, you have the option to play alone, but I don’t think that’s how Payday 2 should be played. It should be experienced with friends, planning a heist, and eventually getting rewarded with ‘dolla billz’ as a team is far more fun.

The soundtrack was something I was pleasantly surprised with in Payday 2. The music is very quick and high-paced, but only when the game gets frantic (e.g. when the police have just launched an assault). It reminds me of music in Geometry Wars 2. As the game would go on, the music would get more intense to suit the game. Make sure to appreciate the music in Payday 2, because its soundtrack is probably one of the best ones out there.

Seeing as the game isn’t officially out yet, there were bound to be problems,Â but surprisingly there wasn’t many. So far,Â I’ve onlyÂ experiencedÂ 2 minorÂ problems. Firstly, the game randomly closed after just finishing a heist, and although I received the achievement for leveling up, once I got back on I was still the same level. This will would be incredibly tedious if it happened often, but it doesn’t. Hopefully Overkill Software will fix this problem, but even if they don’t, it hardly nudges the comparable fun factor. However, when I was playing with Brian (my SpawnFirst co-worker), his game crashed/closed and upon opening the game he was at level one. With everyone getting reset on the 13th, it’s not a big deal, but if this is an issue when the game is officially out, Overkill will definitely have to sort it out. Lag was an issue in two games, but even still the lag wasn’t unbearable. Strangely, I was host for one of those games, so I doubt this is an issue with the game, but on my end.

Overall Payday 2 was an enjoyable experience. There is more to cover, so watch out for our official review which will cover the finer details, our final score, and whether this rags-to-riches title deserves to heist your wallet.

Former Staff Writer Mark is an Irish student passionate about games. He enjoys playing sports such as soccer and rugby, but loves playing video games at any time possible. Mark plays mostly on the Xbox 360, but also plays on the PC from time to time. He is a multiplayer manic and also loves to delve into deep storylines within RPGs.
You might also like
505 GamesOverkill SoftwarePayday 2