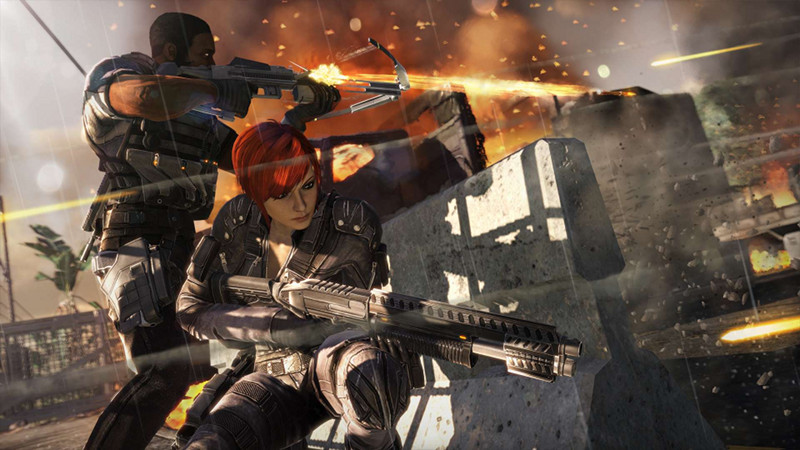 Concept
A-
Fun
B
Potential
A+
Vision
B
Total Score
A-
Please note that all impressions are based on a select portion of a game that has not been fully released yet. Much is still subject to change, and this does not necessarily denote the quality of the finished project. As always, opinions in the article are subjective to the writer.

In 2010, developer Insomniac Games (famous for the popular PlayStation franchises Resistance, Spyro, and Ratchet and Clank) announced their first cross-platform release.Â  Originally titled Overstrike, this cooperative third-person shooter has since been renamed to Fuse, and has been overhauled both graphically and aesthetically to adhere to a more mature, serious audience.Â  Set for a North American release of May 28, Insomniac released a campaign demo at the beginning of May to garner some hype.

The demo begins with a Call of Duty-esque loading screen, showcasing a futuristic overlay that briefs you on the upcoming mission.Â  It explains a mysterious and powerful substance known simply as Fuse, and you are made aware of the disastrous implications of Fuse falling into the wrong hands.Â  The ‘wrong hands’ referred to are those of one Raven Corporation â€“ and the Overstrike 9 team (read: the four protagonists) must infiltrate their facility.

After choosing which one of the four members you will start as (donâ€™t worry which, switching between characters is a breeze), a short opening cinematic displays your team jumping onto a cliffside ledge.Â  While the cutscene provides no context to the current situation, it does show off a dynamic snowy environment.Â  Scaling the cliff with a quick platforming segment, the gameplay of Fuse is finally presented.

The snowy landscape in Fuse may look cold, but it’s absolutely gorgeous as well

Here is where youâ€™re introduced to the â€œLeapâ€ mechanic, which allows you to quickly and intuitively swap between any of the team members on the fly.Â  After selecting each character for the first time, youâ€™ll be given a quick tutorial about their specific class abilities, as well as details on their uber-powerful, Fuse-enhanced weaponry (which Iâ€™ll get to in a bit).Â  Finally, opening up the start menu reveals the RPG aspects of Fuse: youâ€™re presented with an in depth skill tree which, for demo purposes, has already been partially filled out.Â  It contains the usual stat upgrades (such as +15% damage for pistols), as well as a specific action skill for each class in the vein of Borderlands.Â  I took a few moments to browse potential skill point upgrades before getting back into the action.

A few unsuspecting Raven operatives patrolled an open area before me, giving me ample opportunity to plan my attack.Â  Selecting Jacob, whose Fuse-fueled crossbow (also known as the Arcshot) is perfect for taking out long distance enemies, I immediately sparked an alert as I began to pick the enemies to shreds at a distance.Â  Jacobâ€™s action skill, which allows his Arcshot bolts to explode in flames, cleared out a few thick spots of Raven operatives.Â  Using these action skills, as well as firing off the Fuse-powered weapons, consumes your valuable supply of the actual Fuse itself.Â  In order to make the most of each soldier, you will have to balance gunplay and the tactical use of your skills.

Surviving in Fuse will be a team effort

Luckily, though, you are given an arsenal of other standard weaponry to complete your tasks.Â  Leaping to Naya, I used her cloaking ability to sneak behind the remaining Raven soldiers, only to silence them all in a matter of moments with a shotgun.Â  Reinforcements were on me in a hurry though, forcing me to unleash Nayaâ€™s Warp Rifle.Â  After firing enough rounds into an enemy, a mini black hole pops into existence to rip apart bystanders. Â Every single instance of this was oh, so intriguing.

The cover system works wonderfully, but at times I would still find myself on the edge of death.Â  For this, I leaped to Izzy, who can throw down medical beacons.Â  These beacons replenish health in a hurry, and will also heal any downed teammates within its radius.Â  Her Shattergun is also perhaps the most satisfying of the Fuse weapons, because killing Ravens with it means encasing surrounding enemies in a coating that, when struck, will shatter them for an instant kill.

Nearing the end of the level, I moved forward to the rooftop where I met heavy resistance.Â  Here is where it was Daltonâ€™s time to shine; using his Mag Shield, which acts as a portable bullet barrier, I closed in a slew of enemies.Â  Letting a pulse blast out from the end of the shield killed a few enemies and dazed the others, giving me enough time to switch out weapons and finish off the last of the Raven soldiers.

Dalton might be a wisecracking smartass, but his Mag Shield is all business

End Act One.Â  My hands were sweating, as the level was a test of both strategy and shooter competency.Â  I was amazed at the AI, which handled itself in a professional manner. Â Even though I was playing with computer partners, it felt like three other buddies were beside me at all times.Â  A humorous message from Insomniac about the next level being â€˜too amazing for a demo’ pops up, and I was forwarded to a later point in the campaign.

Every ounce of strategic value was, at this point, blown out of the water.Â  The next segment introduced mini bosses known as Leadfoots, who wear mech suits and can withstand an insane amount of damage.Â  They boast deadly flamethrowers and will run down all of your teammates no matter where you hide, making the cover mechanic essentially useless against them.

This is a Leadfoot, and he’s a son of a gun

In the ensuing chaotic and frantic struggle, one glaring problem stood out: if I found myself cornered and needed to switch to a new teammate, I would have to tediously hold down select to bring up the leap menu.Â  It may not seem like much, but that extra half second is often crucial to survival in Fuse, especially when playing alone.

The Leadfoot battle was drawn out, but after it was over, I was brought back to another short battle with Raven soldiers.Â  The combat became fluid and intense once more as I made my way toward an evac chopper.Â  Getting to the destination, a cinematic rolled around and â€“ you guessed it â€“ the chopper was destroyed before it could get Overstrike 9 out of there.

This is where the demo ended.Â  I was free to play through it again, and the game progressively tracked any level and skill tree upgrades.Â  Itâ€™s definitely worth noting that XP gained for leveling up characters during combat will be earned for all of the characters â€“ whether or not youâ€™re actually controlling them.Â  This encourages swapping out characters, instead of choosing either Jacob, Naya, Izzy, or Dalton exclusively. Â It also offers deep replay value to ensure they are leveled up to succeed on harder difficulties.

Fuse definitely left me wanting more.Â  Every character feels unique, and the RPG elements feel like a fully fleshed out idea.Â  Insomniacâ€™s shooter may have a few things that I found cumbersome, but they have a set up for the most refreshing cooperative shooter since the original Borderlands. Â But hey, don’t take my word for it; theÂ FuseÂ demo is available now, try it out and tell us what you think in the comments below!

Former Contributor Nolan Alber is a college student from North Dakota. He enjoys rescuing puppies from burning buildings and beating up criminals on the streets, and often lies about his interests to make himself look better. Nolan is an avid gamer on PlayStation 3 and PC. He impulse-buys more video games than he can actually play, and is a fan of shooters and fighting games (even though heâ€™s terrible at the latter).
You might also like
Fuse