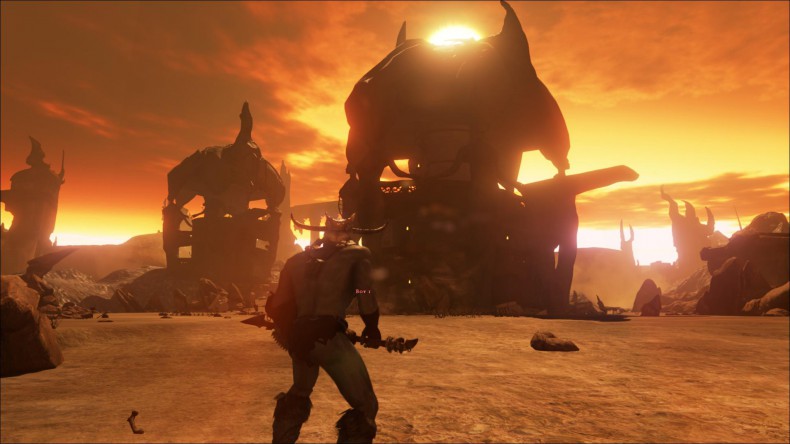 I suppose I should preface this review with an admission. I am not a regular consumer of games that are in alpha, beta, or otherwise unfinished. Given a limited games budget, I tend to reserve my money for finished products rather than spending what little I have to be a product tester. With that little caveat in mind, lets talk about Skara: The Blade Remains.

Skara  is a game currently under development by indie developer 8-Bit Studio and is, at the time of writing, $29,182 of the way to its $35,000 Kickstarter goal. It purports to be a totally new genre of game, MOV, which stands for Multiplater Online Versus. While Skara does seem to be rather different, at present it’s hard to argue it’s anything more than a twist on the melee combat focused experience found in Torn Banner Studio’s Chivalry series or Fatshark’s War of the… titles.

The player chooses their class from the available selection, and then wields that class’s particular weapon, be it sword, lance, war hammer, what have you. The players are grouped into teams, usually all playing the same class of character representing factions, and then duke it out with their opponents for the most kills, least deaths, whatever the particular set of victory conditions happens to be for that match. Rinse, repeat, blood, gore, murder, etc.

What Skara  promises, however, supports its claim to be something a little different. Players will be able to choose from a selection of (at present) five unique races, each with different fighting styles and strengths and weaknesses. All of these races have lore and histories attached to them, and since Skara  is going down the free-to-play business model path players will be able to customize their own characters. 8-Bit has promised that there will only be customization objects for sale, presumably hoping to avoid the ‘pay to win’ exploitation that befalls so many F2P games.

However, all of that content is understandably missing from the pre-alpha code, leaving only the barest of bones from which to draw conclusions. True to the words of the developers, Skara  does look very good, even at this early stage.The art style is an interesting blend of cell shading and photorealism that managed to avoid the most cartoonish extremes whilst still giving some artistic substance to what could otherwise be very boring and run of the mill designs intensely familiar to anyone who’s played any game from The Elder Scrolls V: Skyrim  to The Witcher.  The character models are all solid; they move relatively fluidly and the lava in one of the two currently available stages looks sufficiently molten. There are two of the promised five races available to play, the centurion-esque Durno and the more tribal Kharn. Both types of character models are interesting to look at, and each plays sufficiently different to at least give hope to some combat variety. The combat itself is a little clunky at this point, with what feels like an unpleasant amount of lag between mouse click and sword swing.  Granted I can’t claim the greatest amount of familiarity with games like this, but the delay seems to be there to add a feeling of weight, but instead just comes across frustrating. In a game like this the ability to strike your opponent before moving out of range of their counterattack is a vital mechanic, and when you need to account for the second and a half of lag before your character will actually obey the commands you’ve given him it gets very annoying very quickly. Hopefully that will be fixed before release, or at least 8-Bit can make sure the other races are a little lighter on their feet.

Overall, there’s not a lot to comment on when it comes to Skara  in its current state, but what little there is seems pretty promising. If the developers can up the pace of the combat and do away with that annoying little delay then there won’t be a lot that can match it for arena-based combat, certainly given its visual flair over the other comparative titles. Skara  is built on solid foundation; the art style, graphical quality, and the obvious love the people making it have for the world they’ve created should make for a compelling experience once all those pieces are in place.

As I mentioned above, Skara: The Blade Remains  is currently looking for a further $5818 dollars before the end of its fundraising Kickstarter campaign on July 4. Assuming they meet their target, they plan to put the game on Steam early access. If you’re feeling rich, donate to make sure it gets on Steam. If you’re just curious then wait until the beta is available. Either way, keep an eye out in the future for this title. It’s (sort of) in a league all its own.

Staff Writer Reuben is a student, a nerd and an all round SpaceBadass. When heâ€™s not playing games in his free time he reads anything he can get his hands on, is an aspiring stand-up comedian and makes gaming videos on Youtube. He decied to try writing because it was neater than leaving all of the words in his head, where they were liable to clutter the place up. Heâ€™s owned every iteration of the Pokemon franchise (he usually chooses the Grass starter, except Chikorita, because why would you?), completed Borderlands 2 more times than can possibly be good for his mental health and owns a worryingly large collection of gaming reference t-shirts. He usually plays both PS3 and Xbox 360 games, but is probably going to jump to PC for the next generation. He hopes to contribute as much to SpawnFirst as he can, and he feels really stange about writing in third person. He may also have over written his bio. Xbox Live: CruelCoffee, PSN and Steam: RoboFish_MkII
You might also like
alphaKickstarterPreview