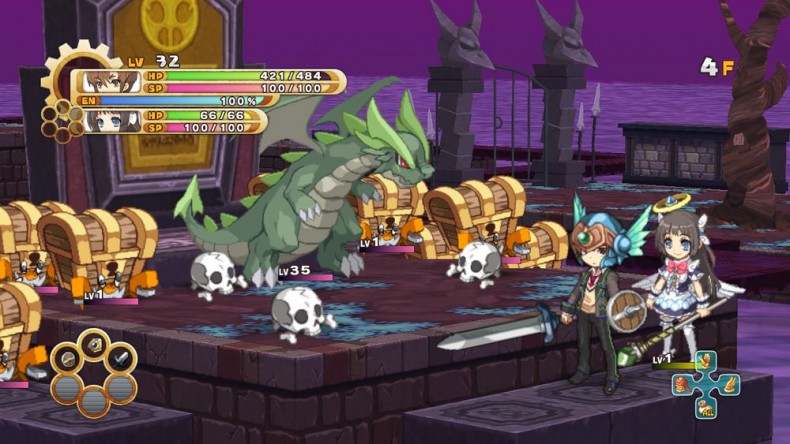 From the planning and development team ofÂ Disgaea: Hour of DarknessÂ comes a new game in the RPG genre titledÂ The Guided Fate Paradox. The premise of the game is that you are God and you have to guide the fate of your people and “answer the prayers and grant the wishes of all your creatures.”

This game is like most other JRPGs; the protagonist is a high school student named Renya Kagurazaka who just so happened to have a twist of fate that deemed him “the chosen one.” This time around, the task you’re chosen for is to become God. As God you have an exclusive angel partner named Lilliel Saotome who is there to help guide you through the transition from every day high school student to the task of deity. As you continue through the game, you recruit other party members to help you guide the fates.

In the game, the task of guiding the fates is accomplished through a device called the Fate Revolution Circuit Machine which is used to grant the wishes of your worshipers. The Fate Revolution Circuit Machine is essentially a portal to an alternate universe in which to guide one’s fate in the real world. Entering this alternate universe known as the “Copy World” is like a randomly generated dungeon where monsters called Aberrations attack you with the sole purpose of attempting to stop you from guiding the fates of your believers.

Aside from the Aberrations, players will also have to be wary of traps set in the world that seem to pop up randomly. These can range from spike pits in the floor as shown above or arrows being shot at the player which seem to be triggered by stepping foot on a specific area of the floor. Granted these aren’t the only two types of traps in the game to be sure, they are the two shown in the trailer.

Much like in Disgaea, the battles go according to the layout of the battlefield and how far the player can attack is depicted by squares either in front of the player or surrounding them depending on the attack range and type. Bosses are fought at the final floor of the Copy World. Presumably, each fate you attempt to guide has a different Copy World, thus entailing a multitude of different bosses and his/her own minions to defeat alongside him/her. Defeating the boss means that you have successfully guided the fate.Â Experience gained in the Copy World is the only way to level up.Â Upon leaving the Copy World, your level reverts to one; however, all experience gained during battle will be added to your total level and increases your base stats. So for those who enjoy level grinding, you can bet that you’ll be spending quite a bit of time in the Copy World.

The Guided Fate Paradox releases on PlayStation 3 on November 5th in North America.

Former Editor-in-Chief Angie has a passion for gaming. She has never been able to put the controller down since first picking up an SNES controller at the age of 3. She loves researching anything gaming related and talking games amongst her friends.
You might also like
JRPGNIS AmericaPlayStation 3