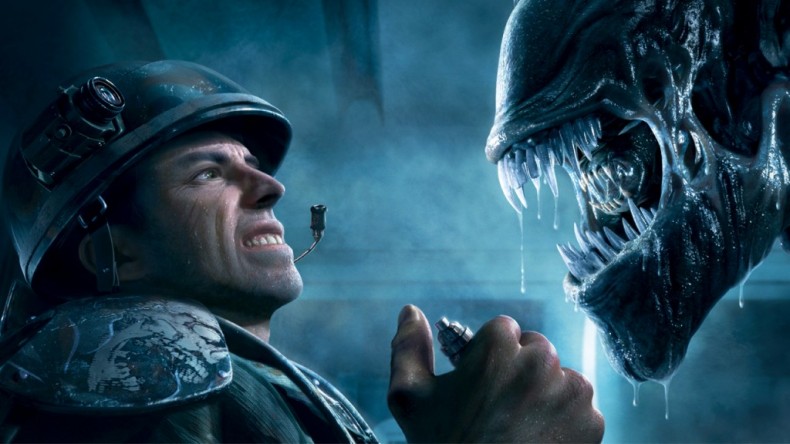 The "Aliens" franchise could easily be a great subject and template for a video game, but unfortunately Colonial Marines is both disrespectful to its source material and is nothing more than a cheap cash-in.

Game Over Man, Game Over!

“Aliens” is a great film that has inspired countless movies, video games, and other forms of creative media since its debut on the big screen.Â  Unfortunately, just about everything else in the franchise after the film’s release has been nothing short of terrible; especially the atrocious “Aliens vs. Predator” movies.Â  Now Aliens: Colonial Marines can be added to the list of awful media related to the “Aliens” franchise as well.

The game begins with the Colonial Marines boarding the U.S.S Sulaco, the iconic spaceship from the movie, after receiving a distress signal from one of the movie’s characters, Hicks.Â  Players are soon thrust into the role of Corporal Winters as he and his fellow marines board the ship only to find that it is infested with the famous Xenomorphs.

Shortly after the first encounters with the creatures, the marines are attacked by PMCs hired by Weyland-Yutani, a corporation hell-bent on studying and capturing the aliens without much regard for their safety or relationship with the universe’s military.Â  The PMCs destroy both the Sulaco and the marines’ ships forcing the remaining characters to try and survive on the aliens’ planet.

There really isn’t any story past this point because the developers were looking for any reason to place the characters in the film’s famous setting.Â  As far as plot goes, the idiotic antagonists at W-Y apparently have some sort of vague plot to somehow use the aliens to either benefit humanity or take over the universe; it’s not very clear.Â  But it was obvious the game’s story would be poorly written as soon as the first lines of dialogue assaulted my eardrums.

The writing is absolutely atrocious and begs for a mute button for every character much like playing in an online lobby; the support character O’Neal in particular needed this feature.Â  It sounds like the developers were aiming for the cheesy, tongue-in-cheek dialogue found in 80’s films, but completely missed the mark by a good mile.Â  To make the writing even worse, the bland, unconvincing voice acting shows little efforts on the actors’ parts, though putting on a good performance would be a waste of talent so I can’t blame them. Aliens is a generic shooter through and throughout.Â  Players have few choices in weaponry since guns can be split into groups of various rifles, shotguns, and pistols all of which have little firepower, terrible accuracy, and are only different by aesthetics and fire rate.Â  Players also get the chance to use a smart gun and a flamethrower, but once ammo is gone, they are gone for good.

Grenades are also a part of the game’s armory, but unfortunately the grenades do little damage and are thrown with less strength and accuracy than a six-year old Little Leaguer.Â  Human enemies on the other hand can use their weapons and grenades more proficiently than the players as every shot aimed in the player’s direction will hit.

What is truly unfair is these enemies can also hurl a grenade from across a large area and land it in the player’s lap a majority of the time.Â  Unlike most FPS’s, the grenade indicator flashes once, then the grenade explodes leaving the player with no room to react.

A huge problem with the game is the idiotic A.I.Â  In exchange for superb marksmanship, human enemies will generally stand still and out of cover; not that it matters since the pulse rifle can’t hit the broadside of barn from point-blank range.Â  The aliens do the exact opposite of the humans and charge directly at the player and only the player.Â  It doesn’t matter if a friendly, yet equally stupid, A.I. is firing upon one of the enemies because they will almost always aim for the player.

The game is also extraordinarily challenging because the player cannot take any punishment whatsoever.Â  Their is an armor feature reminiscent of “Doom,”Â  but two or three hits later, it’s gone and only the life bar remains.Â  From there on, only a few bullets or swipes from an Alien will bring up the game over screen.Â  Even with full armor though, Aliens have the ability to instantly kill the player and enemy grenades will do the same.

The one-hit kills become absolutely infuriating toward the end of the game when the player is required to detach three gas pipes from a spaceship.Â  Of course, the ship is attacked by in infinite amount of aliens so whenever I would detach a pipe, I would immediately be killed after by an alien standing behind me.Â  What makes it more annoying is there were about six or so A.I.-controlled marines sitting behind me.

The developers tried to spice things up in the form of boss fights, but they are either boring or frustrating just like the rest of the game.Â  One fight requires the player to jump into a power loader, or robot suit, where a boxing match ensues between Winters and a particularly large alien.Â  The fight boils down to backing the creature in a corner, spamming the left punch, and praying the little aliens nipping at your heels don’t kill you because the A.I. NPCs refuse to help.

There is also a fight with a queen alien, which can be predicted before you boot up the game, but the queen never posed a threat to me.Â  The objective is to pull five switches which in turn defeats the boss.Â  Even as I ran past the oversized creature, it never attacked me once.Â  Note to developers: it’s not really a boss fight if the boss doesn’t fight back. Graphics don’t make the game, but there should be a set standard because the graphic design of this game actually gave me a headache.Â  Any part of the environment more than five or so feet away from the main character is blurred by a blue haze.Â  The other factor contributing to my headache was the HUD which is designed to look like it’s being displayed from an 80’s computer monitor.Â  This sounds like a good idea on paper, but the bright blue graphics fade into the background and create a vivid contrast with the darkly colored art direction.

The overall graphics, when you get close enough to see past the blue haze, are dull and contain very little detail.Â  Textures sometimes take a few minutes to load but once they do, there isn’t much of a difference.Â  The game’s animations also received the same treatment as the graphics.

Characters and enemies either seem stiff or rubbery, particularly the aliens, and there are absolutely no facial animations on the characters making them incapable of showing one of the few emotions presented in the game.

The last factor to my throbbing headache was the terrible sound design.Â  When the terrible voice acting wasn’t contributing to my perpetual pain, the sound of the weapons were next in line.Â  I understand this is the future, but the guns neither sound believable or powerful.Â  It is also worth noting, the sound effect of the pulse rifle is one of the most obnoxious and annoying effects ever to be created by a sound artist.

Alien’s multiplayer is different in which two teams take turns as both the aliens and the marines in various modes.Â  This is a good idea and should be fun, but all of the gameplay problems from the single player transition into the multiplayer as well.

Guns are still weak and inaccurate, but things seem to be naturally balanced by the poor controls when playing as an alien.Â  A problem much like the shotguns is here as well in which there are two alien types differentiated only by name, aesthetic, and one attack.Â  It is also hard to tell if you are in attacking range because of the poorly positioned third-person camera.Â  Granted, when competing, I could adjust to these problems and still do decent, but just as I thought I might be enjoying the multiplayer, another problem reared its ugly head, spawn killing.

I believe the worst problem to plague any multiplayer game is bad spawning and this game makes Call of Duty’s spawn system much more forgivable.Â  In one match, I was unable to get back in the game because the programming threw me in front of an enemy player every time.Â  After five consecutive deaths Â (I’m dead serious) I decided I could handle no more of this game and turned it off.

Since this is an “Aliens” game, the developers tried to add some fanfare with the inclusion of Easter eggs alluding to various characters and events from the movie.Â  Like most standard FPS games, there are plenty of collectibles to be found including weapons owned by the movie’s characters. Â The weapons don’t give the player any advantages in combat since they can’t be upgraded and finding collectibles is mostly for obtaining achievements or trophies. Aliens: Colonial Marines is a complete disaster and should be avoided at all costs.Â  The writing, story, graphics, animations, sounds, gameplay and multiplayer are some of the worst I have ever experienced.Â  The only good things about the game is it is short and you can drag three other people along to equally divide the misery.Â  The “Aliens” franchise could easily be a great subject and template for a video game, but unfortunately Colonial Marines is both disrespectful to its source material and is nothing more than a cheap cash-in.

Former Contributor Chris West is a graduate of Texas Tech University where he earned his BS in Electronic Media in Communications. Chris has been passionate about games since he was a kid and today prefers games with a strong narrative. He also has a soft spot for horror games, legitimately scary games mind you, and any game claiming to be challenging, Dark Souls for example. When he isn't playing games, he is pursuing his other passions: music and photography. Chris can play both guitar and bass and then take high quality pictures of the performance with his camera. In the end, Chris enjoys writing about his passions and ideas, when he isn't destroying his friends in Call of Duty.
You might also like
aliensChris Westreview