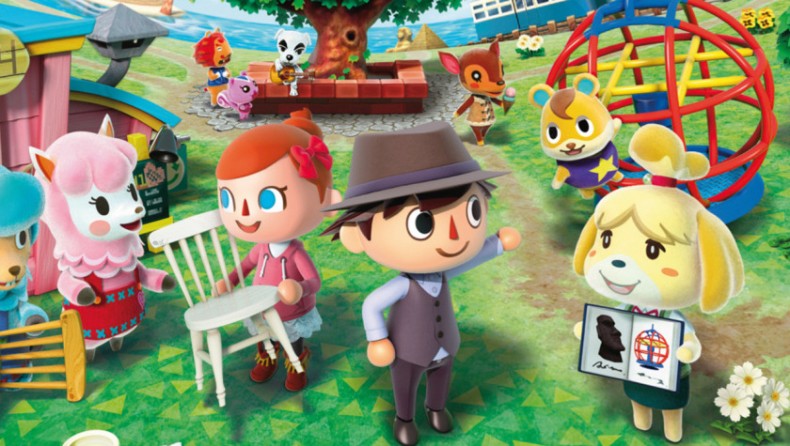 It retains Animal Crossing's feeling of relaxing escapism; The amount of freedom available in molding towns and homes is impressive; Visiting other players' towns is a fun social experiment

A sense of monotony can creep in at times; Mayoral powers rarely feel worth utilizing; Tom Nook is still a greedy bastard

Trying to explain your love of Animal Crossing to someone is tough. Some people just aren't going to "get it" or like it, and that's fine. For me, each new entry is an escape from reality; a journey to a world I really wish existed. I've spent innumerable days of my life with this series and New Leaf is my favorite entry by far.

Charming As All Get Out

Animal CrossingÂ released in 2002 for the GameCube. It was unlike anything anyone had ever played before. However, the GameCube had its limitations. The multiplayer mode inÂ Animal CrossingÂ was dead on arrival, falling victim to the early days of Internet connectivity and to the simple fact that people preferred playing the game alone.Â Animal Crossing: New LeafÂ  takes Nintendo’s much ballyhooed franchise in a new direction, and it’s all the better for it.

Animal CrossingÂ has never had much of a story to speak of. If there’s a story there, it’s the story of a life, albeit an unrealistic one. But that’s the main draw and comfort of it, though. It offers an escape to a place where a person can be truly happy. It’s why I love taking the dive time and time again. InÂ New Leaf players will still find themselves dealing with the franchise’s usual obstacles. They’ll still be buying and selling furniture, collecting seashells and catching bugs and fish to donate to the local museum or help pay off the ever-greedy Tom Nook. They’ll still be decorating their home to impress a weaselly weasel. Certain events are still triggered by holidays and other special occasions. The core gameplay mechanics have changed very little since the original.

However,Â New LeafÂ tasks players with being the mayor of an entire town. This means they can now shape how their town looks and even how it feels. Public Works allows players to change the appearance of their town by building, for example, street lights, benches and even new businesses. I was skeptical at first about how much freedom would be allowed, but then I realized it’s all about identity. Players can let their imaginations run wild in games likeÂ New Leaf,Â and that’s wonderful.

Players can also enable ordinances for their town. The ordinances include setting the entire town to run on a night or day schedule to suit the player’s sleeping patterns, making citizens do all they can to keep the town looking good or changing the number of bells involved in buying and and selling stuff at a store. I primarily used Bell Boom, which is the name assigned to the third choice of the aforementioned options. All the ordinances are helpful in one way or another, but none of them are really necessary to “progress”.

The multiplayer is the best it’s ever been in the history ofÂ Animal Crossing. Players can visit other players’ towns and homes and buy and sell items at their stores. Chat is available via text, which appears over players’ heads in speech bubbles. If a player sees an item they like in another player’s home, they can order that item for a higher price than it would usually sell for. The item will then be sent in the mail to the player who ordered it. It all combines to create yet another neat feature that allows friendships to be formed and time to be wasted, which is, of course, the point ofÂ Animal Crossing. 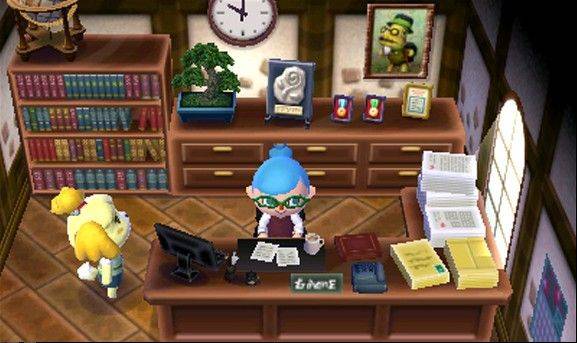 New LeafÂ doesn’t really look any better than the originalÂ did, but it doesn’t matter.Â Nobody bases their affection for the Animal CrossingÂ games off how they look, anyhow.Â The art style still retains that classic Nintendo charm, and by that I mean it looks as if a rainbow jumped off a building and splattered all over everything when it hit the ground. The music is absolutely harmless and I became desensitized to it quickly. NPCs still speak Animalese, which is the unintelligible and jabber-y language Nintendo made up forÂ Animal Crossing.

The problem with anyÂ Animal CrossingÂ game is that they can get boring during extended sessions. Every activity in the game can become monotonous after a short period of time, which is why I recommend putting the game aside if it begins to annoy and coming back to it later when your interest has been re-piqued. That’s howÂ New LeafÂ is meant to be played. However, nothing excuses the high amount of bells Tom Nook demands for each room or floor added to a home. His prices are outrageous, and they’re usually what leads to the monotony. But hey, he’s Tom Nook.

The new mayoral stuff is a good idea, but it’s one that never feels fully fleshed out. I had fun tinkering around with it, but it never feels necessary. I hope Nintendo expands upon it in the next iteration. It could be turned into something great.

Trying to explain your love ofÂ Animal CrossingÂ to someone is tough. Some people just aren’t going to “get it” or like it, and that’s fine. For me, each new entry is an escape from reality; a journey to a world I really wish existed. I’ve spent innumerable days of my life with this series and New LeafÂ  is my favorite entry by far.

Features Editor Buddy was a journalism major at the University of Alabama. He now spends his days writing novels that will probably never get published and wishing he were an extra in an Anthony Hopkins film. He's been gaming since he can remember and has owned every console from the NES to the TurboGrafx-16 to, yes, even the Phillips CD-i. He loves all games, but his favorite genres are shooters and RPGs. His favorite game is The Legend of Zelda: Ocarina of Time.
You might also like
3DSanimal crossingNintendo