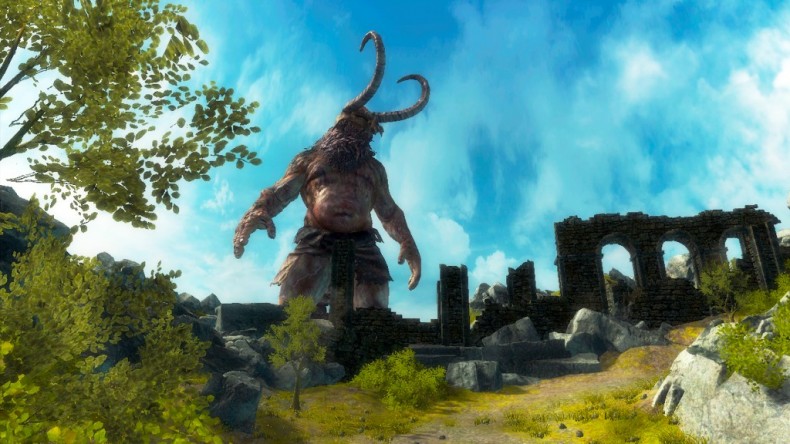 It's a free-to-play game that doesn't force feed players microtransactions; The combat system is fun; The ability to interact with other players is an interesting addition; It's filled with content

Players can sometimes gain an unfair advantage due to balancing issues; Hit detection is spotty; It feels confined on occasion

Ascend: Hand of Kul is merely a pretty decent game, but the fact that it's free makes it worth checking out by every human being on the planet. It offers way too much for a game with a $0 price tag. Sure, it features microtransactions, but they take a backseat to the rest of the game. That's the way it should be. That's what makes Hand of Kul truly recommendable.

I’ll be honest: I hate microtransactions. I don’t like it when they’re shoved in my face, like they were inÂ Dead Space 3Â (which I enjoyed). I especially don’t like it when I can’t play a game as long as I want to without laying down some cash, as is the case with most Facebook games. Free-to-play games should be just that: free to play. If the developers of free-to-play games want to make a little money, which is understandable, they should give the people who play their games a choice as to whether or not they want invest extra money in a product instead of hitting them over the head with in-game notifications or something like that. Signal Studios has gotten the formula right withÂ Ascend: Hand of Kul.Â It’s refreshing. 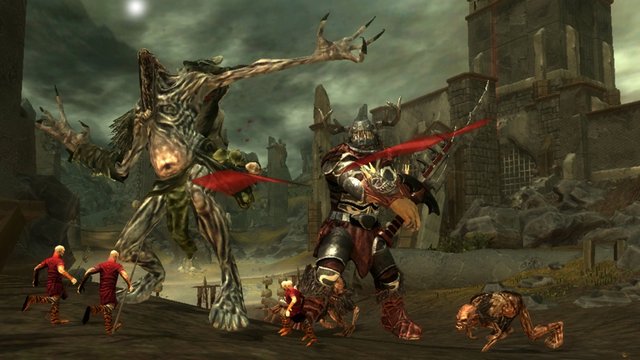 The main protagonists, who are customizable characters, are members of the Caos, a race of warriors. When the game begins players are tasked with aligning themselves with one of three gods. The gods come in the form of darkness, light and void. After choosing which god they wish to serve, the player is then commanded to journey across the land and slay Titans, which are immortal giants. None of the characters are interesting. Nothing about anything inÂ Hand of KulÂ makes any sense. It’s not concerned with its story at all. 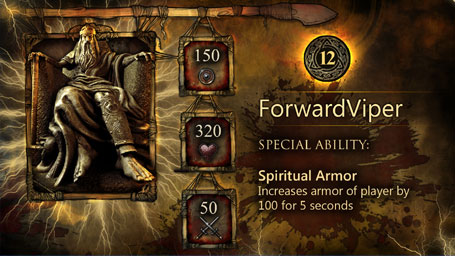 Depending on which god they choose, players will be granted certain spells/bonuses.Â Hand of KulÂ relies on basic sort-of-like-Diablo-but-nowhere-near-as-good gameplay. It’s fast-paced and fun. Enemies are pretty easy in the beginning, but get harder as the game progresses, soÂ Hand of KulÂ is, you know, a video game. The key to games likeÂ Hand of KulÂ is making monotonous combat feel interesting, and Signal Studios has succeeded in that regard.

ButÂ Hand of KulÂ isn’t just about hacking and slashing until the credits roll. There’s a whole world to explore, rife with chests to plunder and regions to conquer. Doors tucked away into mountains offer optional dungeons that are filled with treasure. The protagonist must earn as much territory as possible for his (no females here) god. Players will accomplish this by defeating waves of enemies and murdering a human that is about one-eighth their size.

Yes, the protagonists inÂ Hand of KulÂ are giants in a world of humans and even bigger giants. Humans can be utilized in battle, eaten for health or stomped on for Souls, the currency ofÂ Hand of Kul. Souls can also be gained from destroying human settlements, defeating enemies and opening certain chests. They can also be purchased with actual money, which is where the microstransactions come into play. 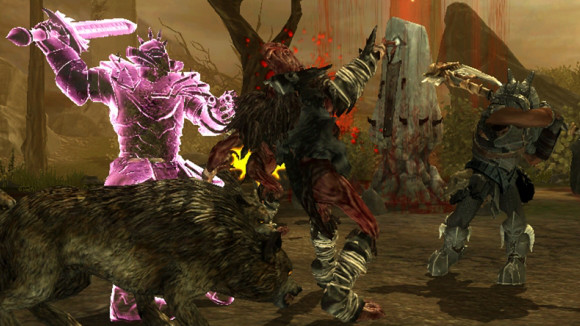 Hand of KulÂ leaves the option of purchasing extra souls completely up to the player, but you can gain a big advantage in the game by investing in them. Souls can be spent on character and equipment upgrades and better weapons. The temptation is there, but unnecessary; the game can be completed without spending a single penny. That alone makesÂ Hand of KulÂ worth playing in my estimation.

Players can also interact with other players inÂ Hand of Kul. Other players are shown in the form of “ghosts” a laÂ Dark Souls and can be witnessed swinging away at an unseen enemy. This can assist you in knowing what lies ahead. You can directly affect another player’s game by sending them “blessings” or “curses”. “Blessings” are spells that assist the other player, while “curses” are extra enemies the other player will have to contend with. The other player is able to return the favor, so, as Walter White would say, tread lightly.

One of the most interesting things aboutÂ Hand of KulÂ is how actual human players show up in the game as mini-bosses of sorts. They’ll either pop up at certain points in dungeons or attempt to steal other players’ territories. When they attempt to take over a territory you own, you’ll get a prompt, and you can choose to defend your territory or ignore their advances. If players choose to defend their territories, they’ll usually be put up against a player that is at a lower level than them. However, the first word in the game’s title may also factor into the outcome of these battles.

You can “ascend” inÂ Hand of Kul,Â which means that once your main character reaches a certain level you can start afresh with a new character. The new character will carry on from the point your last character ascended from with about the same level. It’s smart to ascend because it grants each new character a higher level cap. Your new character can also carry the gear your old character had on them, but that requires souls, which may lead to more microtransactions. Again, it’s totally optional and not shoved down players’ throats. 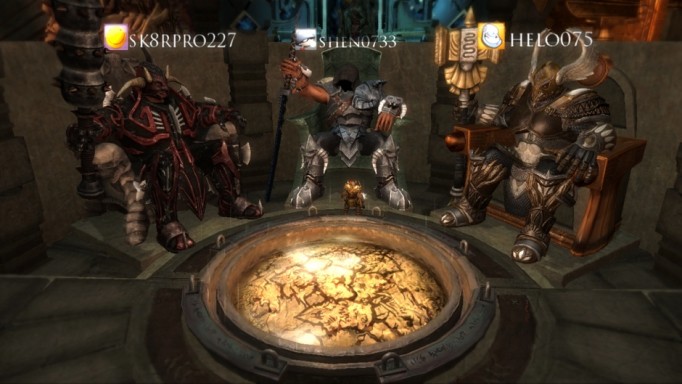 Hand of KulÂ doesn’t have the most groundbreaking of visuals or anything, but it looks good enough. At least it has a more consistent framerate than most other open world games. Seeing a Titan causing havoc in the distance is always cool, as is watching the tiny humans scurrying around beneath your feet. Loud, often repeating orchestral music plays in each area. The soundtrack was composed by Kevin Riepl, who also did the music forÂ Gears of WarÂ andÂ Crackdown 2.Â Hand of Kul’s soundtrack is reminiscent of both of those games. 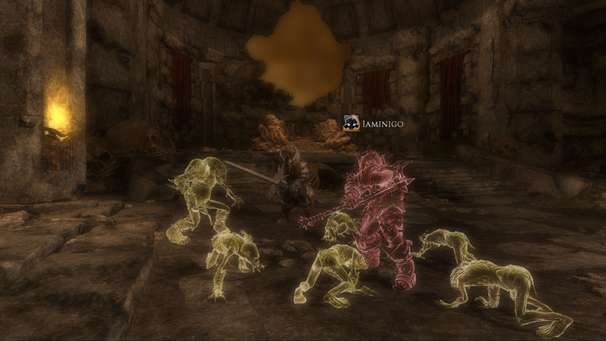 While microtransactions are optional, a lot of people opt to partake of them, which leads to some unfair advantages. This becomes a problem when it becomes obvious thatÂ Hand of KulÂ was not designed in a way to accommodate newcomers. Some people will say it’s Signal Studios attempting to enforce microtransactions, but that’s not true. It’s simply balancing issues that haven’t been fixed yet.Â Also, the game has some bad hit detection problems in its current state. Oftentimes an enemy’s life bar won’t empty at all despite a hit obviously connecting as proven by blood splattering all over the place.

Also,Â Hand of KulÂ feels kind of confined at times. The world contains many vistas, but all too often a feeling of dÃ©jÃ  vuÂ settles in. See that field with humans in it? There’s probably an optional dungeon in a mountain nearby. Fighting waves of enemies in order to spread your influence across the land also gets boring because the process is exactly the same every time.

The only times I wouldn’t recommend a free game is if it had a title likeÂ Vampire RainÂ orÂ Ride to Hell: Retribution. Ascend: Hand of KulÂ is merely a pretty decent game, but the fact that it’s free makes it worth checking out by every human being on the planet. It offers way too much for a game with a $0 price tag. Sure, it features microtransactions, but they take a backseat to the rest of the game. That’s the way it should be. That’s what makesÂ Hand of KulÂ truly recommendable.

Features Editor Buddy was a journalism major at the University of Alabama. He now spends his days writing novels that will probably never get published and wishing he were an extra in an Anthony Hopkins film. He's been gaming since he can remember and has owned every console from the NES to the TurboGrafx-16 to, yes, even the Phillips CD-i. He loves all games, but his favorite genres are shooters and RPGs. His favorite game is The Legend of Zelda: Ocarina of Time.
You might also like
ascendMicrosoft