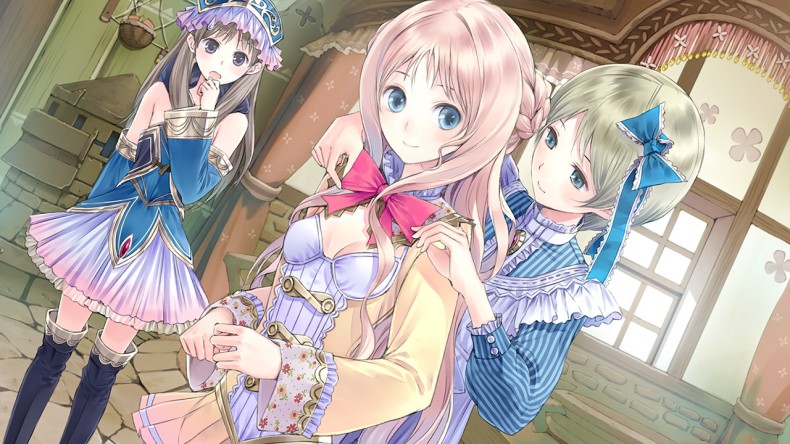 Beautiful scenery and strong battle mechanics give this game an addictive edge.

Lack of character development and conflict leave this Atelier Meruru felling empty. Furthermore, an overplayed female stereotype personality was painful on the eyes and ears.

Atelier Meruru Plus: Apprentice of Arland is a game that just isn't quite ripe yet. It's not a strong stand-alone game, but it is a notable addition to the franchise.

A Thousand Words is Not Worth a Pretty Picture

Atelier Meruru is a Japanese RPG with a kid-friendly tone and an emphasis on female characters. With that being said, I enjoyed the effort but not the presentation. Itâ€™s clear that a lot of effort was put into Atelier Meruru to make it a quality game, but some aspects (mainly dialogue) got a little too much attention and ended up crippling the game.Â  Letâ€™s begin…

As Princess Meruru, you seek to find your own path rather than the path that is laid out for you. Meruru has decided that she wants to learn alchemy rather than rule the kingdom, Arland. After a lengthy discussion, the King decides to let her practice alchemy, but only if it benefits the kingdom. You begin your journey as an alchemist where your success is measured by the population in the kingdom and your overall popularity with the people. Arland will be considered a formidable kingdom once the population reaches a certain level, at which point Meruru will have her fatherâ€™s full support in studying alchemy rather than being a princess. Youâ€™re given 3 years to complete the task and get Arland up to par.

As a Japanese RPG, you can imagine the depth in this game. The goal is use alchemy to aid in small developments which award development points that then allow you to build academies, shops, and walls for the kingdom. As you build more structures, the kingdom becomes more structured and the population increases. Alongside this, you can go to the tavern to perform quests such as gathering goods and killing monsters for monetary rewards. Said tasks provide you with ingredients to perform alchemy. There are also side quests you can perform for monetary rewards enabling you to purchase ingredients. You build up a pantry full of lizard tails, lumber, rock etc. which are mixed together to create items to aid you on the battlefield or towards evolving the kingdom.

You are able to choose new locations to visit and explore using a world map. As you gather ingredients, you fend off monsters in a team of three, one of which will always be Meruru. You can choose between basic attacks, using MP for advanced attacks, or any offensive items you may have cooked up. The action buttons allow you to jump and swing your staff to initiate battles. As you develop the kingdom, you make new alliances and gain new team members.

Nature is kinda pretty when it’s not attacking you

Atelier Meruru is easy on the eyes and harsh on the ears. Occasionally, I found myself enjoying the scenery, completely oblivious to approaching enemies. A fair amount of the game is alchemy, and in doing so you are looking at a menu screen (2D), rather than running into battles (3D). But when you’re in battle, you’ll find some decent art direction that makes the game stand out.

Unfortunately the same canâ€™t be said for sound. Iâ€™ll admit that I played the majority of the game with the sound either low or off. The music is upbeat and jovial, but it becomes too much too fast. However, it is incredibly catchy. Just be prepared for the possibility of it playing on repeat in your head.Â  For a simple video game, itâ€™s an admirable composition, but itâ€™s just too much.

As previously noted, the sound is distressing on the ears. Whatâ€™s worse is the voice acting. Meruru, the main character, has the voice and script of a 12 year old girl that loves the color pink, ponies, and everything glittery, and because she’s the main character, she’s given a lot of dialogue. Although the poor voice acting and script made it harder to enjoy the game, I would have been able to overlook them more easily if it werenâ€™t for the next issue…

Dialogue cutscenes. I canâ€™t begin to count the number of dialogue cutscenes in this game. These occurred after almost every action was performed. I’d fast-travel to the weapons shop, only to be interrupted by a cutscene filled with 10 minutes of (unnecessary) dialogue, which would then put me in another location and start another 10 minutes of dialogue. By the time everything was said and done, I’d sometimes forget what I was doing in the first place! These cutscenes seem to have no real rhyme or reason, and they break up the fluidity of your actions which causes a lot of confusion.

Did I mention the dialogue was unnecessary and questionable?

If youâ€™ve taken note, youâ€™ll notice I said â€œmonstersâ€ to describe the foes in the game. This term is straight from the horseâ€™s (Meruruâ€™s) mouth, when referring to carrot-wielding rabbits. For a game with a main character that has a stereotypical girly-girl personality, it felt wrong that she was attacking rabbits, horses, and unicorns (these are actual enemies in the game). At one point I tried to attack a pig (thinking they are icky and monstrous in comparison to a bunny), but I quickly discovered that it was not actually a foe. This came as a shock to me after having just defeated a pleasant-looking unicorn. The odd part is that the monsters were inconsistent throughout the game. Some locations required that I fight insects, humanoid lizards, and even a behemoth that could accurately be described as a monster.

The voiceless monsters provide the only light conflict in the game. Several times it seemed like there should be a deeper, undiscovered struggle, but no such deeper meaning exists. No characters seem to be going through any struggle beyond trying to meet deadlines. No boundaries are broken, nor limits pushed. This leads to a stale storyline with no definitive rising action, climax, or resolution.

Finally, the game teeters on the line between being â€˜manageableâ€™ and â€˜too much.â€™ At first it was a little overwhelming to have to pickup battle mechanics, develop the kingdom, and learn how to use alchemy. Then, just when you get a handle on things, something inexplicable will happen, and you will feel as if you must have missed some important dialogue or action, because there has to be more to the game than just wandering around the kingdom fighting bunnies and building structures. However, it unfortunately seems as if no deeper purpose actually exists. SpawnFirst recommends counting the paragraphs in each section. Atelier Meruru suffers from too much dialogue, unconventional foes, a poor script with taxing voice acting and too much tedious depth. Then, at the base of it all, there is no real conflict thatâ€™s driving the story or the characters. The stakes are low and the story is flat. I kept playing it because I enjoyed the close battles, but in the end, I was fighting rabbits armed with carrots. If I were to relate this game to an object, it would be a coloring book. This analogy makes perfect sense if you play the game, but we honestly donâ€™t recommend it.

Versus Mode Co-Host/Creative Co-Director Chris is ridiculous. True story: instead of paying rent one month he bought a Nintendo 3DS. Being a fan of all gaming platforms is tough on his wallet, but he's a gamer on a budget. He plays his PS Vita or 3DS while on the train to/from work and his Xbox 360 or Wii U when at home. He won his university's Video Game Olympics competition back in April of 2012 and mentions it whenever he can in conversation. His other interests include comedy, surviving Chicago, and hangin' out with his pup, Theta.
You might also like
JRPGPlayStationPS