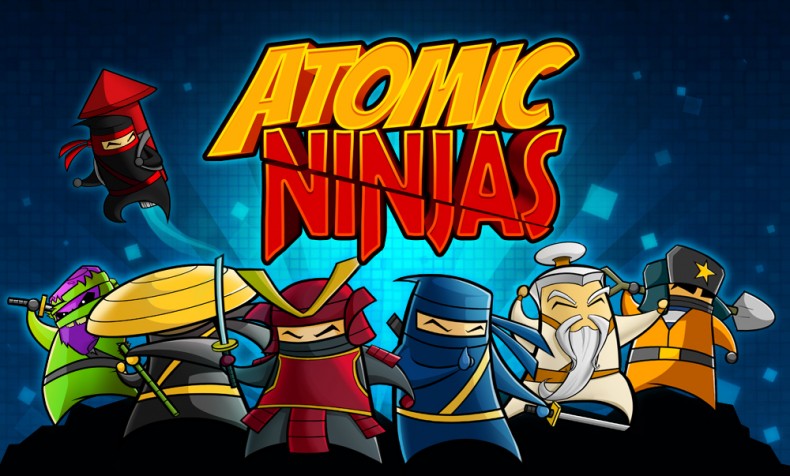 Bots give a few troubles, "Noob Rage" laughter/screams are unsettling and go on for a little too long, no private slots option when creating a match

This game is one you won't regret buying. It's only $10 and you get both the PS3 and PS Vita versions so you definitely get your money's worth. With a different experience every match, how can you go wrong? The cute little characters and laughs that the game brings are all something worth treasuring. It's rare to find a game that is so enjoyable you keep a smile on your face from start to finish so don't let this game slip by unnoticed. Get it!

Atomic Ninjas is a game that’s good for all ages. There are some game modes where strategy can come into play, but anyone can pick up the controller and play. Children and adults alike can all enjoy this great title. It’s an easy to pick up and learn joyride that you won’t regret trying out.

The concept of the game is to have the most points at the end of a match. 4 players are pit against each other in a brawl for the most points and kills. A bar at the bottom of the screen lets the player know where they stand regarding points in the match. Points are acquired by successfully landing hits on your opponents as well as gaining kills. At the end of the game, each player is shown with their respective rank (4th place is shown for a brief moment first, 3rd is shown second, 2nd is shown third and 1st is shown last), then it shows the leaderboard for the game. Afterwards, players are brought back to the lobby where they can choose to wait for the host to start up the match or leave.

The gameplay mechanic is simple enough. Utilizing only three buttons (X, L1, and R1) and the analog sticks the game is easy enough for anyone to just pick up and play. The game starts with an in-depth tutorial that is littered with jokes; one of which being the Sifu saying, “Clumsy! You fat teenager, or what? You need exercise! Get here now!” after the player jumps across platforms to reach him. In the tutorial, players learn how to use the different items in the match. Players are taught how to use the rocket to fly, the grappling hook to swing across affixed hooks on the stage, the claw-jump which is a claw that allows the player to lunge a long distance and cling to the wall like a cat, the force grab which allows the player to use telekinesis to grab boxes littered throughout the stage and throw them at opponents, the punch which is a move that surrounds the player and launches opponents in the area of the attack, and the shuriken which is the ninja throwing star that has ricocheting properties; the player uses the right stick to aim. The rocket, grappling hook, claw-jump, and punch can be found in glowing boxes on the map. The shuriken and force grab are only obtained through stealing them from defeated players (more on that later) or by selecting a character who has it in their starting equipment; each character has their own unique starting equipment. For those who might not play the game for a while and might need a refresher course (although it’s such a simple game, you might never need to replay the tutorial ever again), the tutorial is replayable via the “Ninja Academy” option on the main menu. The main menu also includes the options Play Online, Quick Match and Options. The Play Online menu allows player to either create a match or find a match, where the player gets to choose from a number of lobbies that show what game modes will be playable, how many players are currently in the lobby, and the length of the match. The Quick Match menu throws the player into the first available lobby found.

This is an online only game so you’ll always play against someone new. I have no major complaints about the game being online only with one exception, which I’ll touch base on later. Lobbies fill up fairly quickly; I never waited longer than approximately 2-3 minutes for all empty slots to be filled.

Creating a match is simple enough. The host is presented with only two options: Game mode, and match length. Game modes include Capture The Flag, Domination, Deathmatch, Team Deathmatch, Treasure Hunt and King of the Hill. If you’d like a deeper experience, you can choose Objectives or Team Objectives mode where the game will randomly select objectives for the entire match. The length of time for matches can be set for either 5 minutes, 10 minutes or 15 minutes.

Players cannot freely switch between weapons and abilities. They are found in the aforementioned glowing boxes around the map and once you switch, you can’t switch back unless you pick it up from another box. The weapons and abilities are replaceable and must be picked up again if the player wishes to switch. There are seven different characters to choose from which are unlocked by increasing your Ninja Rank via experience points acquired playing matches. There are also eight super abilities to choose from which are unlocked through ability level. Ability level is increased by completing Ninja Trials which include accomplishing tasks such as get 3 kills with the Shuriken and obtain 3 kills with the Punch ability.

For those players who quit matches prematurely, the game immediately replaces them with a bot player. Players cannot enter a match that has already started so if a player leaves before the match is over, the bot player stays for the remainder of the match. There is a slight issue with these bot players but, again, we’ll discuss that a little later.

In the match, defeating opponents grants players with the option to steal equipment from them. Therefore, if you kill an opponent who possesses the force grab ability, you can push a button to steal it and use it for yourself. So if you’re looking for the force grab, you can obtain it by defeating an opponent.

I want to touch base on the sound first. The game has this feature called “Noob Rage” where a character will become enraged if they are killed either by each player or killed multiple times in a row (this wasn’t touched upon at all in the tutorial so it is hard to tell which is the true cause of this segment). The character becomes enraged and there is this extremely loud and slightly unsettling maniacal scream that plays until the enraged character calms down. It goes on for a bit too long and it’s a moment where you just wish it would end sooner rather than later.

Also, the game’s sounds all seem pretty natural. Between the sounds of the rocket while flying or the sound of the punch, they sound the way you would expect from a cartoonish art style. They are loud enough that they drown out the music, however, that can be rectified by putting up the music volume in the options menu. The soundtrack to the game is enjoyable and I found myself bopping a few times when I wasn’t in deep concentration trying to win. The game is a cartoonish art style and the characters look stiff. However, this isn’t necessarily a bad thing. The character movements seem to fit in with the art style and seem appropriate for the character sizes. The levels all have a different feel to them and the background definitely adds to the ambiance of the level. The foreground contains the platforms where the characters jump and differ between levels; one level has a smooth, slightly neon designed platform scheme whereas another level has a jagged rocky surface to fit in with the background and atmosphere of the level as a whole. This attention to detail really puts the player in a spot where each level is a fresh experience.

One of the biggest issues I’ve taken with this game is that there is no way to make private slots when creating a match. As previously stated, there are only the options of which game modes you’d like to play and the length of time you wish to play, so if you want to play with a friend, try to make sure they enter the lobby quickly to reserve their spot.

Another issue with the game I take is within the implementation of these bot players. They move slightly faster than the human characters and they almost only have either the shuriken or force grab ability. The problem with this is that they have increased accuracy so trying to escape a bot character’s shurikens or flying boxes gets a little frustrating. Even in the off chance the bot possesses the punch ability, they are still more accurate and, in turn, hit you the second you’re within their personal space with little chance of escape.

The game features a leaderboard system so you can pit your score against your friends and players worldwide. This has the potential to give the game more flair for those with a competitive spirit.

Replayability truly depends on the experiences had in matches. The game is fun enough to want to pick up again and again. A series of good matches will make you want to keep playing for longer. It’s easy to lose track of time playing this game. It’s definitely a good game to play when you have time to spare before other obligations or if you want a relaxing and fun experience. This game is one you won’t regret buying. It’s only $10 and you get both the PS3 and PS Vita versions so you definitely get your money’s worth. With a different experience every match, how can you go wrong? The cute little characters and laughs that the game brings are all something worth treasuring. It’s rare to find a game that is so enjoyable you keep a smile on your face from start to finish so don’t let this game slip by unnoticed. Get it!

Former Editor-in-Chief Angie has a passion for gaming. She has never been able to put the controller down since first picking up an SNES controller at the age of 3. She loves researching anything gaming related and talking games amongst her friends.
You might also like
PSNreview

PSN Going Down For Five Hours