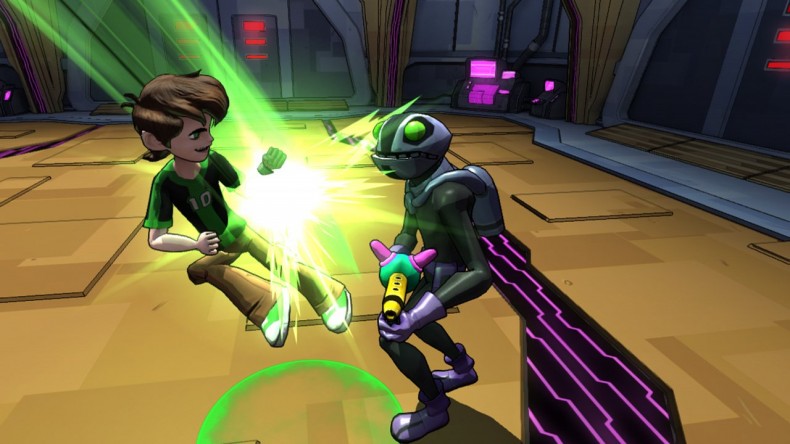 Gaining new alien types is an intriguing prospect; The cel-shaded graphics are colorful and inviting; The story is fun and aimed towards fans

The combat is far too simplistic; The running sequences are tedious; Bad camera; The game promises excitement and then snatches it away

Ben 10 Omniverse 2 isn't worth bothering with. I would accuse it of being a cash-in, but I think it's more a case of the developer not knowing what to do with the license.

I’ve seen a lot of episodes of the different versions of the Ben 10Â  TV series. I really like it. It’s a great children’s show, and it has deservedly won a lot of Emmys. The video game world hasn’t been as kind to ole Ben Tennyson. Several Ben 10 Â games have released since the first, Protector of Earth, Â in 2007, most of them poorly received by critics and fans alike. Last year’s Ben 10 Omniverse Â didn’t fare too well because of its heavy-handed reliance on simplistic mechanics. I’m sorry to report that High Voltage has chosen to keep things dull with Ben 10 Omniverse 2. Fans of the TV series will probably enjoy the story in Ben 10 Omniverse 2Â  if they can overlook everything else. It’s definitely what kept me going. It’s decent because it’s written by the same folks who write the show. Ben is on a mission to stop the Incurseans, an alien race he never encountered in the TV series. He infiltrates their warship and “borrows” (steals) some of their technology for his own purposes. A lot of the characters from the show pop up as it progresses and it’s a fun, if not particularly memorable, tale. However, non-fans will be completely lost (and probably shouldn’t be playing a Ben 10Â  game in the first place). Gameplay goes one of two ways in Ben 10 Omniverse 2.Â  The first thing players will experience are the automatic running sequences. These sequences are pretty much like on-rails portions from other games, but are free of any AI threat aside from a few floating robots scattered here and there that fire upon Ben when he gets close to them. If he’s in the correct form, he can get the upper hand on them before he reaches them, which brings us to the other thing in Ben’s way during these parts: obstacles.

Aside from the robots, walls, containers and a running enemy seek to halt Ben’s progress. All is not lost for him, though, because the cool thing about Ben Tennyson is that he can transform into different types of aliens. If a wall is too high, Ben can transform into a large alien and smash through it (some of the bigger walls are impenetrable, but the game is never really clear on which ones). If it’s a low wall, Ben must transform into a smaller, faster alien and leap over it. Ben must become his third and final selectable option, an alien that fires projectiles, to take down the robots, containers and running enemies.

The other thing Ben will be doing a lot of is fighting multiple foes at the end of each running sequence. The fighting portions are where the game threatens to become interesting on several occasions. Ben 10 Omniverse 2Â  is basically a button-masher, but Ben’s transformations make it seem like it’s going to be something more. Much like how they work in the running sequences, Ben’s different forms can be used to dole out heavy attacks, faster attacks or long-range attacks. I experimented with each alien type at least once, butÂ  I found myself using the projectile-tossing one the most. The foes change and Ben gains new alien forms, but everything remains exactly the same gameplay-wise. When I read in the press release for Ben 10 Omniverse 2Â  that it was cel-shaded, I thought back to the last cel-shaded game I played, Dark,Â  and shivered. Thankfully, the cel-shading works for Ben’s world. Ben 10 Omniverse 2 Â is at least colorful and inviting even if its environments do tend to all blend together sometimes. It’s not exactly pushing the limits of what gaming consoles can do, but it’s still appealing to the eye. The only really noticeable graphical discrepancy is in the strange way characters mouths and bodies move when they’re speaking.

I don’t know if the same actors from the show voiced the characters in the game, but they sound the same. This is a good thing. It lends a lot of warm familiarity to the experience, which is great for fans. However, some lines of dialogue are repeated ad nauseam, making it feel like the commentary from a WWE game. It’s really annoying, but not nearly as annoying as the complete lack of sound effects during combat. When Ben or his enemies take damage, no sound effects accompany the action. It makes the proceedings feel really silly and surreal. There’s nothing wrong with Ben 10 Omniverse 2Â  that a little oomph couldn’t fix. As it stands, it’s incredibly boring. The gameplay becomes stale after five minutes. The combat boils down to nothing more than mashing two buttons repeatedly. The game awards combos for no reason, and it’s hard to tell when Ben is racking one up anyhow. The running sequences are completely lifeless. Moving the analogue stick back and forth and switching between alien types constantly lends the game an even bigger sense of tedium.

Ben’s biggest foe in the game is the camera. It can’t be controlled, and it locks itself into a position where Ben can’t see enemies or even the right path to take sometimes. On the hardest difficulty (which is what I played the game on mainly; it’s far too difficult for children, by the way) this leads to some agonizingly frustrating deaths. I got excited when Ben unlocked a new alien type or upgraded a previous one, but my excitement quickly turned into disappointment when I discovered that these supposed “changes” didn’t change anything at all. That’s because, depending on what category they’re in, all the aliens are exactly the same.

Ben 10 Omniverse 2Â  isn’t worth bothering with. I would accuse it of being a cash-in, but I think it’s more a case of the developer not knowing what to do with the license. High Voltage knows how to do action; they worked on Saints Row IV with Volition, after all. I don’t think they “get” Ben 10.Â  Ben Tennyson is well-suited for the video game world. Let’s get him in the hands of the right developer and see what happens.

Features Editor Buddy was a journalism major at the University of Alabama. He now spends his days writing novels that will probably never get published and wishing he were an extra in an Anthony Hopkins film. He's been gaming since he can remember and has owned every console from the NES to the TurboGrafx-16 to, yes, even the Phillips CD-i. He loves all games, but his favorite genres are shooters and RPGs. His favorite game is The Legend of Zelda: Ocarina of Time.
You might also like
d3publisherSaints Row IV

Adventure Time: Explore the Dungeon Because I DON’T KNOW! Review
2.0
2.9