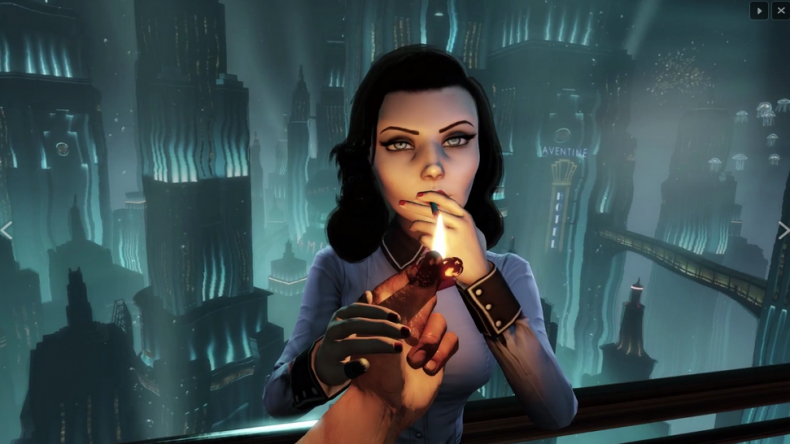 A beautiful tribute to two separate games, and for fans of the series, it's a nice, if incomplete, follow-on.

It will feel a little like fan service, and the moments that border on interesting or new quickly revert to tried and true BioShock mechanics.

Look, if you loved Infinite, you probably already committed to this way before it came out. Try it, hold your horses (or ... broncoes?) for part 2, and let's see what's out there.

It’s probably easier to start by describing whatÂ Burial at Sea is, rather than what it does for the BioShock legend: it is, quite simply,Â BioShock in the first, recast with Elizabeth and Booker Dewitt. Â BaSÂ doesn’t really make good on commitments early previews seemed to make, and some will be put off by the short play time (2 hours at absolute most) in proportion to the cost, but for fans of the series, it’s a vignette worth experiencing.

You begin as Booker, half-asleep at your desk in your Philip Marlowe-style office, when a striking young woman comes through your door, looking for a light. Â She tells you you can call her Elizabeth, and she’s looking for a young girl named Sally. Â If you look at the calendar on your desk, you’ll see the date: 31 December 1958. Â The premise doesn’t get much simpler than this: your sole goal is to rescue this girl, whatever it takes. Â When you find out that she’s been relegated to Fontain’s department store, you go after her– deep into the ocean. 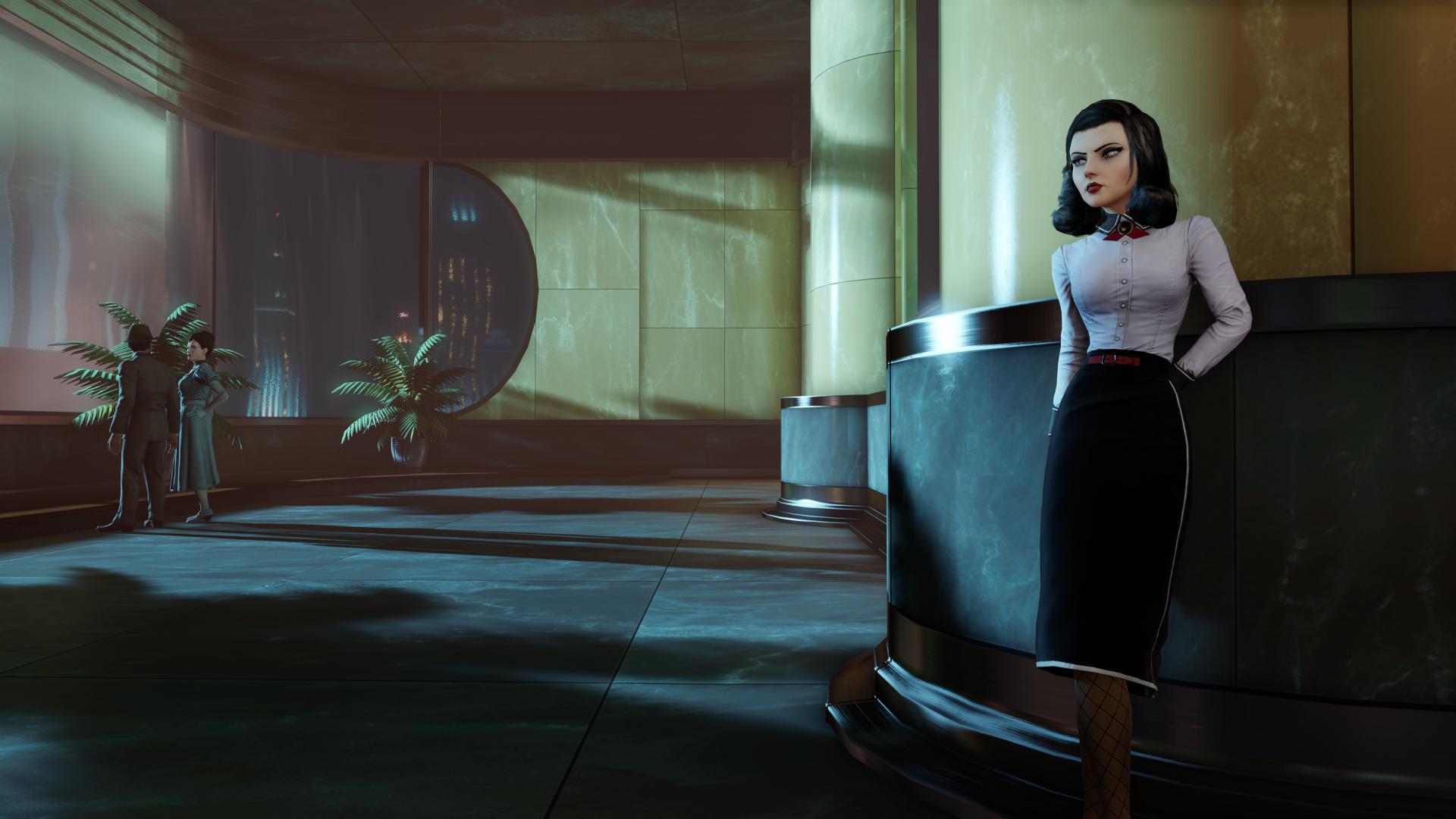 The mechanics don’t differ at all from BioShock Infinite, some retrofitted (futurefitted?) into Rapture. Â “Air grabber,” Booker says, picking up the skyhook. Â Fans of Infinite won’t feel any pain in the transition between the two games; even all of the plasmids are the same, except with the addition of Old Man Winter, which functions almost like Winter Blast but apparently has a very different origin. Â Weapons are all the same too, and early scenes when you’re equipped with only a hand cannon (Marlowe-style!) quickly disappear into carbine and tommy gun-inflated combat scenarios.

The enemies are almost exclusively variations on the same old splicers fromÂ BioShock, with the exception of the appearance of an old friend, and nothing in the gameplay will feel new. Â You can bring things through the tear, with the help of Elizabeth, though that can feel slightly silly when, for instance, you have her bring through a samurai shortly after she’s trying to haltingly explain the origin of her tear ability. Â (Though, let’s be honest, if I could have brought forth samurai inÂ Infinite, I’d have done itÂ constantly.) Â Elizabeth is Â also still there to offer up suppliers, though I found her to be in my way far more than she was ever in my way inÂ Infinite proper. Â The dialogue feels recycled, perhaps purposefully so, and there’s something oddly reassuring and quietly discomforting when Elizabeth agrees to open a locked door for you. 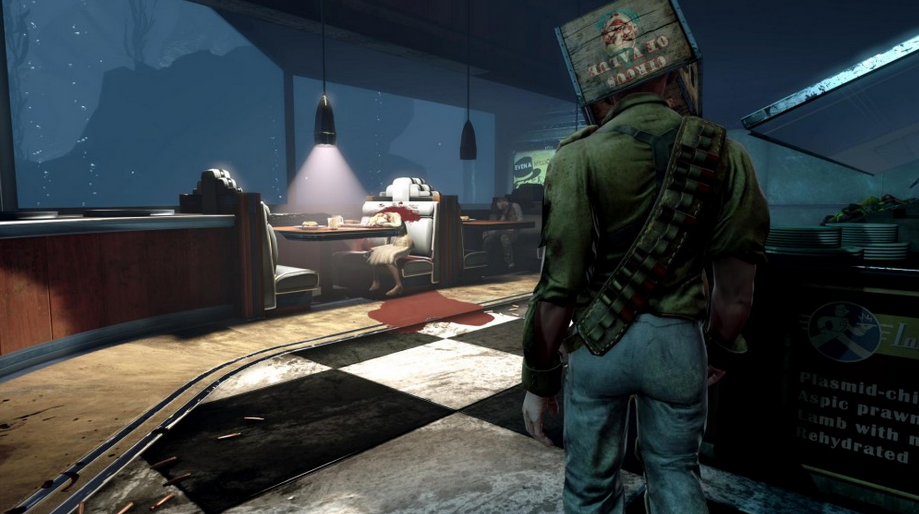 At least it’s not a bucket.

The game looks, in BioShock form, beautiful. Â Rapture is as gorgeous as it ever was, and the early scenes of a pre-fall Rapture are glorious. Â Elizabeth may be one of the most beautiful female characters ever in games, and an early scene where Booker dances with her while gazing in her eyes while the creepy patrons of Cohen’s club stand eerily behind her is gorgeous. Â The descent into Rapture, the lights from the buildings reflecting through the sea, will be a genuinely stunning moment when compared with the memory of post-fall Rapture.

The best moments sound-wise come in the early scenes in the pre-fall Rapture, when people chat and exchange ideas over cigarettes and drinks. Â It’s hard to not want to stop and listen to those snatches of conversation, joining in like you belong there, like you, as Booker, are part of this community. Â The music recalls both Rapture and Columbia, and all of it’s great (though nothing matches theÂ “God Only Knows” barbershop quartet ofÂ Infinite’sÂ early scenes).

There are some problems, but they’re of the esoteric variety: the promises of a pre-Rapture game fall short because you’re so quickly whisked into Fontaine’s world, splicers and all. Â You will want to spend more time in Rapture, but short of stalling the major story elements, that’s not an option. Â It has the momentary feel in places of being a piece of fan fiction, like someone said, “Well, what if we put Elizabeth and Booker … in Rapture?” Â BaSÂ gives in to its baser BioShocky elements after the first act, and the noirish elements disappear in favor of the first-person survival horror shooter that was the first BioShock. Â Except for the presence of Elizabeth, reassuringly tossing EVE and medkits at you, and theÂ Infinite-style plasmids,Â you might as well be right back inÂ BioShock.

This is probably where the game disappoints the most, because those of us looking for a Chandler-style noir romp get about 15 minutes of it. The first major mission involves searching for an invitation to Cohen’s party by rummaging through various neighboring shops as Elizabeth distracts the owners, femme fatale-style. Â It will feel strange for a BioShock game but absolutely right for whatever weird thingÂ BaSÂ purports to be. Â That this is the only moment of this relative weirdness feels disingenuous, like a strange half-attempt at trying something unexpected and new, before revering to the world ofÂ BioShockÂ that we all know and, admittedly, love. 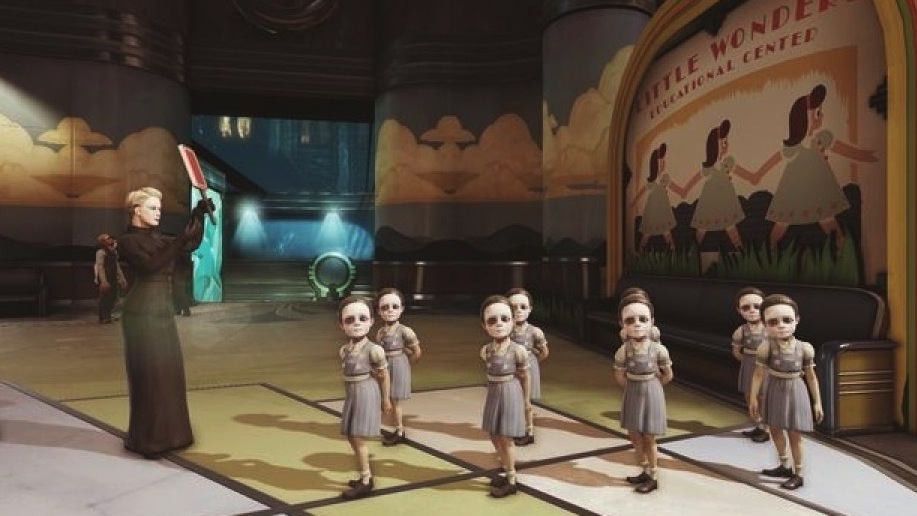 One of Burial at Sea’s finest moments.

Maybe I’m alone in this, butÂ Infinite has decided moments of unbearable lightness; it seems unfair to stealÂ Burial at Sea’s unimpeachable darkness from another game, even if that game is its predecessor. Â Get your own darkness, find your own tone, I almost wanted to say to it. Â

That said, I’ll be the first to say that this is kind of nitpicky. Â Rapture has enough of its tone for plenty more games. Â Elizabeth and Booker can wade in that for a little while.

When I got about halfway through, I thought that I would write here that it’s an issue if you haven’t played the firstÂ BioShock game, but I take it all back (even before I’ve said it). Â There might be some merit to playingÂ BaS if you’ve never touched the first game or the second; Rapture is a very, very different place than Columbia, and though some of the off-hand references might mean less to you, including Cohen’s appearance, the discovery of Rapture might feel like something bigger.

Those moments of descent, of blissfully watching a strange creature swimming outside of a diner window, might seem very different if Rapture is never a place you’ve been to before. Â If it is, this may feel more like fan service than it does anything else.

And, well, okay. Â Let’s talk about how long the game is. Â Ken Levine recently defended the length of the DLC, noting that “We chose quality over quantity.” Â It’s an hour worth of game that you can stretch out to two if you want to wander around unlocking things and looking for, uh, voxophones or audio logs or whatever you want to call them. Â The issue is not the price point (though if you do the math, $7.50 for an hour of game seems like a lot). Â It will feel like a level of the originalÂ BioShock, but a really good one. 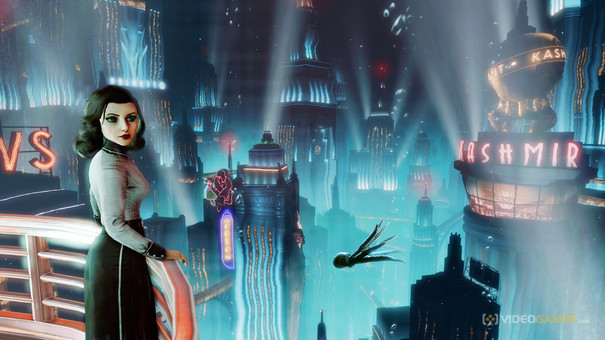 The ending also feels muddy, a strange data and visual dump meant to make sense of– and perhaps give purpose to– the previous two hours. Â I’m going to put my faith in Ken Levine and company and say that this is a grand set up for part two of the DLC.

The Season Pass in general comes with some extras, but whatever is inherent toÂ Burial at Sea is opaque to me. Â  Clash in the Clouds still wins with its Columbia-style musical covers.

For fans ofÂ Infinite, it’s worth the price. Â There’s something jarring and also reassuring about Elizabeth unlocking a door for you or tossing EVE– salts?– your way. Â ButÂ if you weren’t sold onÂ Infinite,Â you won’t be sold onÂ Burial at Sea. Â It’s a letter to fans of both fames,Â Infinite and the originalÂ BioShock, and while fans might be left wanting more, there’s something poetic to the idea that both Rapture andÂ Burial at Seam make grand promises. Â As a side note: get the season pass for $19.99 rather than buying the pieces individually. Â Burial‘s price tag relative to its play time won’t seem so bad if you’re getting 2 other DLCs with it.

Former Staff Writer Alice is a novelist, Shakespearean actress, and gamer who once survived emergency surgery in Bangladesh, but still finds most video games more exciting. She still has recurring nightmares about Uninvited (from 1986) thanks to an early childhood playing games on an ancient Mac. She's played Mass Effect more times than most people should own up to and is eagerly awaiting her very own episode of Intervention, which will likely be the Best. Episode. Ever. She also occasionally speaks German, but only when it's most inappropriate.
You might also like
Bioshockbioshock infinitebooker dewitt