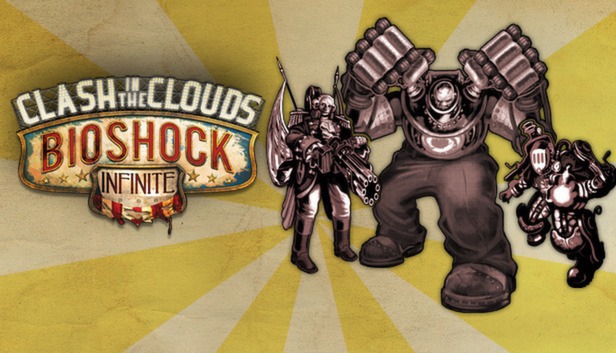 But on the other hand, if you were eager for more of Bioshock's Game of the Year-caliber story (without Bioshock Infinite's often-weak combat system), this isn't at all for you.

There’s something slightly incongruous about looking to a game likeÂ BioShock: Infinite for combat. Â This isn’t to say that Infinite’sÂ combat doesn’t have some serious high points, but it would seem untrue to say that people pick up BioShock looking for a combat experience. Clash in the CloudsÂ offers exactly an antidote to anyone who might have been looking for exactly that. Â It lacks some of the heart and narrative strength that BioShock is known for, but it’s a decent distraction as we wait around for likely story-heavyÂ Burial at Sea. Â If you don’t care for BioShock’s combat system, this is definitely something to avoid, but if you found yourself itching for combat without story amidst the beauty of Columbia, pick this up now. Â This wasn’t exactly the DLC we’d been hoping to get, but it scratches an itch we may not have known we had. 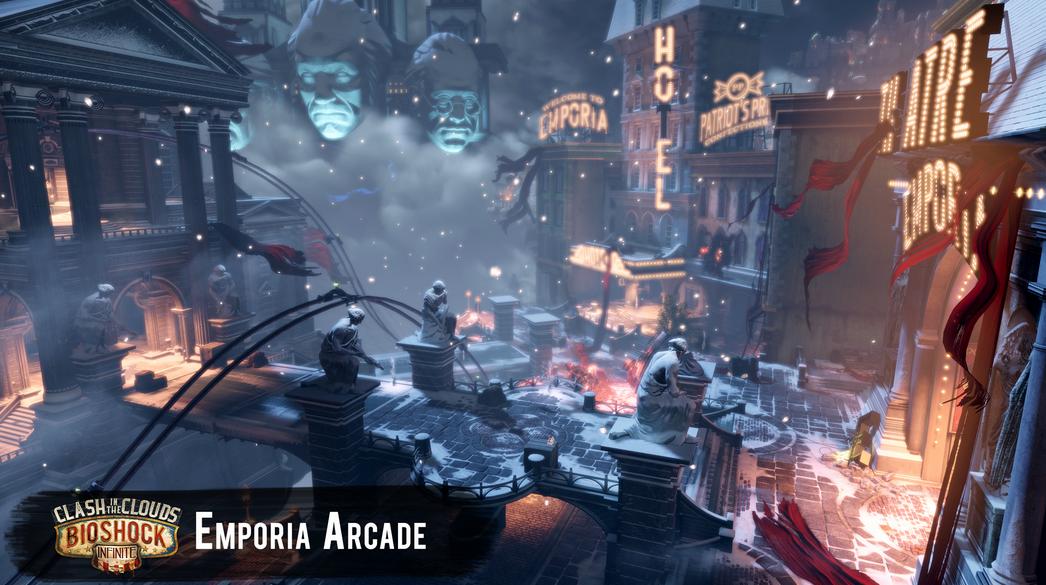 Prepare for a beating.

CitC is all about the combat and nothing but the combat. Â It stretches over four (beautiful) maps, the Ops Zeal, the Duke and Dimwit Theater, the Raven’s Dome, and Emporia Arcade. Â The Ops Zeal is a ship surrounded by Skylines, Duke and Dimwit Theater is an external platform map underneath the leering faces of Duke and Dimwit. Â The Raven’s Dome is a slightly disturbing birdcage-type environment with enemies jumping down from ships around you. Â Each wave stages you slightly differently. Â The Emporia Arcade is a pleasant surprise for anyone who may have bought the art book and mourned the lack of those beautifully crafted exteriors. Â It’s also a wintry wasteland of Patriots. Â

CitC does nothing to advance the story, and it can be played with impunity at any given point during gameplay. Â Your Booker starts at the beginning of his health and shield levels, to be upgraded as you fight off wave after wave. Â The first map is open for play, and each additional map can be purchased. Â There’s no over-arching theme, no subtle or overt commentary on the nature of choice. There’s only you, your vigors, and your shotgun/volley gun/pistol/hand cannon/repeater/etc. Â In this way, it feels a little hollow– even Elizabeth seems to withdraw, leaving you alone to your enemy-killing.

Clash in the Clouds is a game designed to enable players to play with every possible variation of vigors and weapons against every possible enemy. Â There are 15 waves per map, each with a variety of enemies, which are enumerated in a room called the Armory, to which you are whisked between waves. Â This enables you to strategize for each wave, purchase upgrades, obtain new gear or infusions, and change out weapons as needed. Â Blue Ribbon Challenges, also identified between waves in the Armory, dare you to do things that might have seemed untenable during normal play– kill a Handyman with no head or heart shots, destroy Patriots with Skyline attacks only. Â What was combat for survival in the main game now becomes a point of pride– each pedestal display for each map gleams with how many Blue Ribbons you’ve earned. Â What even the most competitive players will find underwhelming is the replayability of CitC. Â When all of those boxes have been checked, there’s little else to come back for– and the beating you’ll get at the hands of, say, five Patriots, can feel a little cruel. 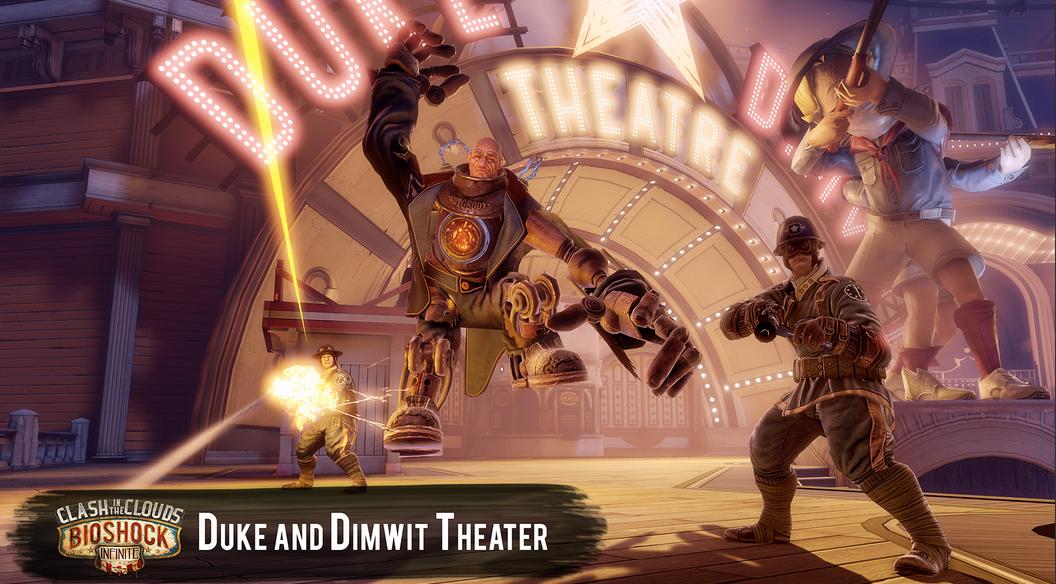 If you close your eyes and pretend, the Handyman is just skipping to come greet you. Not destroy you repeatedly.

One noticeable difference between CitC and BioShock: Infinite proper is the lack of apples and hot dogs and cigarettes lying around or in trash cans. Â The only loot to be obtained is off of the bodies of the people around you– you know, the ones you’ve killed. Â This also minimizes how much Elizabeth is able to provide to you, and her presence is less noticeable than it is in the main game. Â Elizabeth still assists with tears, but the tears are often in direct competition with the Blue Ribbon Challenges (except when theyÂ are the Blue Ribbon Challenges). Â There’s also still no cover system that’s worth anything, which makes some levels feel like a definitive ass-handing, rather than an actual game.

CitC also feels like a game that needs to be played in inches– the final wave of Ops Zeal felt impossible without playing several waves of the other maps to gain more infusions, better gear, and more money for vigors and weapons upgrades. Â (As a point of clarification, what I mean is that the two Handymen enemies handed my tail to me over and over and over again until I went to play a new map and came back, much more powerful and filled with the milk of human vengeance.) Â $500 will buy you a single resurrection, which enables you to die without losing your ranking in any given wave. Â This can be purchased between every wave. Â When you do die without single resurrection, you’re offered three choices: forfeit your ranking but continue from where you are, start again at wave 1, or return to the Archaeological Society. Â This encourages long stints at sitting on your couch fighting off enemies but can be frustrating in the interim.

Another minor downside is that the combat is a little heavy to really be able to take in the maps, and there’s a time crunch between the end of a wave and when you’re forcibly returned to the Armory.

It’s hard to complain about anything related to graphics and sound from an Irrational game, and CitC is no different. Â The maps are beautiful– Irrational plays this up by lovingly panning over each map the first time they’re introduced. Â It’s also worth dying a few times just to hear Comstock abusing and mocking you in different ways in what seems to be an upgrade from the laughing dog of Duck Hunt.

None, but there’s a kind of gleeful moment when you can look at the leaderboards amongst your friends for every map.

None. Â The game is pretty pristine. Â Occasionally on a map it’s hard to find a single remaining enemy or two, because they’ll stay silent until alerted to you, but that’s generally a user-error issue. Â For instance, I spent about five minutes trying to figure out where a Handyman was during one wave. Â I almost dismissed this as a glitch, but sometimes it just comes down to locating your enemy on the map. 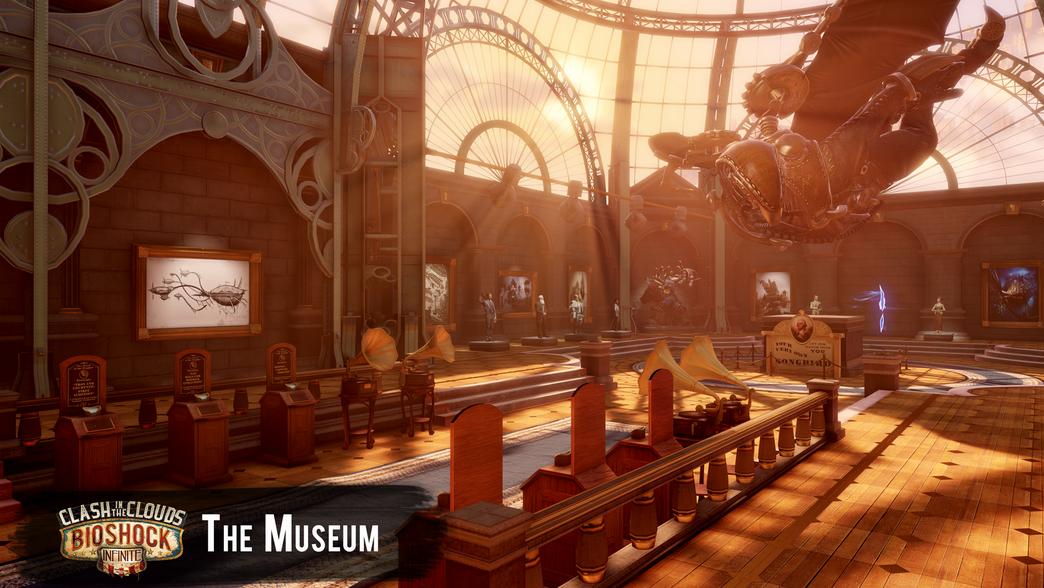 It took me a while to realize that the museum had various extras to buy, from models of characters to kinescope videos. Â These cost a chunk of your change that it’s hard pressed not to feel it’d be better to spend elsewhere, like on vigors and weapons upgrades, but there’s a certain sense of delight when you listen to the BioShocked version of “Tainted Love” or “Shiny Happy People.”

IF you want a Bioshock Infinite combat experience.

Former Staff Writer Alice is a novelist, Shakespearean actress, and gamer who once survived emergency surgery in Bangladesh, but still finds most video games more exciting. She still has recurring nightmares about Uninvited (from 1986) thanks to an early childhood playing games on an ancient Mac. She's played Mass Effect more times than most people should own up to and is eagerly awaiting her very own episode of Intervention, which will likely be the Best. Episode. Ever. She also occasionally speaks German, but only when it's most inappropriate.
You might also like
bioshock infiniteDLCirrational