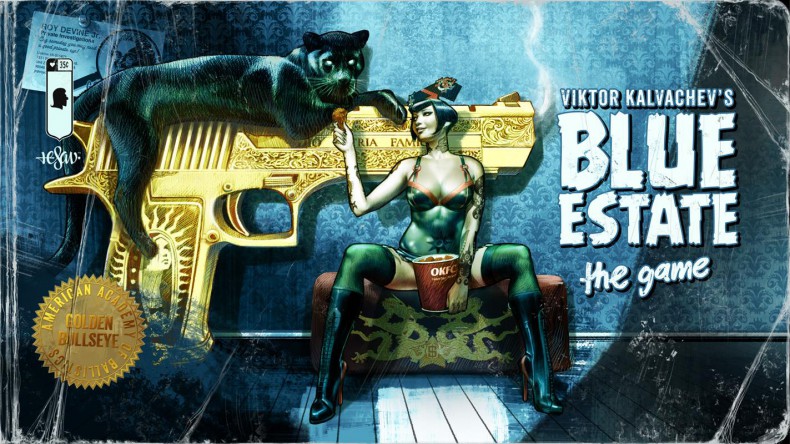 - Gyroscope takes some getting used too

Blue Estate certainly has it's moments. It's a fun game that's marred with more than a few moments of frustration. If you're a fan of classic arcade light gun games then Blue Estate should be right up your alley, if you can look past its short length and high admission price, but it won't be for everyone.

First of all I’d like to preface this review with a bit of a disclaimer. I have no prior knowledge of the Blue Estate graphic novel series, so for the purpose of this review I’ll be rating the game purely on its own merits. 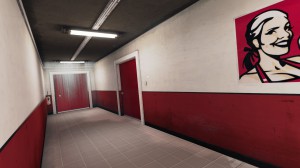 This is NOT a screenshot of Mirror’s Edge.

Blue Estate  puts you in control of Tony Luciano for the first part of the game (as well as the final mission). He’s the son of L.A.’s most respected mob boss. Tony desperately wants his fathers love and approval—that is until his father tries to trade him for Blue Estate (Blue Estate is Tony’s father’s prized horse who has been kidnapped). After Tony skips town you take control of Clarence. He’s an ex-solider who in Tony’s absence has been hired to reclaim Blue Estate for the Luciano family. All of this is narrated to you by Roy Devine, a more than questionable private detective.

The game never takes itself seriously. It heavily features juvenile, borderline racist humor that it can get away with because in this game, in this world, with these characters, it fits. These characters are most certainly not PC, so to have them act as such wouldn’t make any sense. Sometimes the jokes fail to land, but there were more than a few instances that raised a genuine laugh. One instance being a low-budget John Woo homage that I won’t say any more about for fear of ruining the moment. 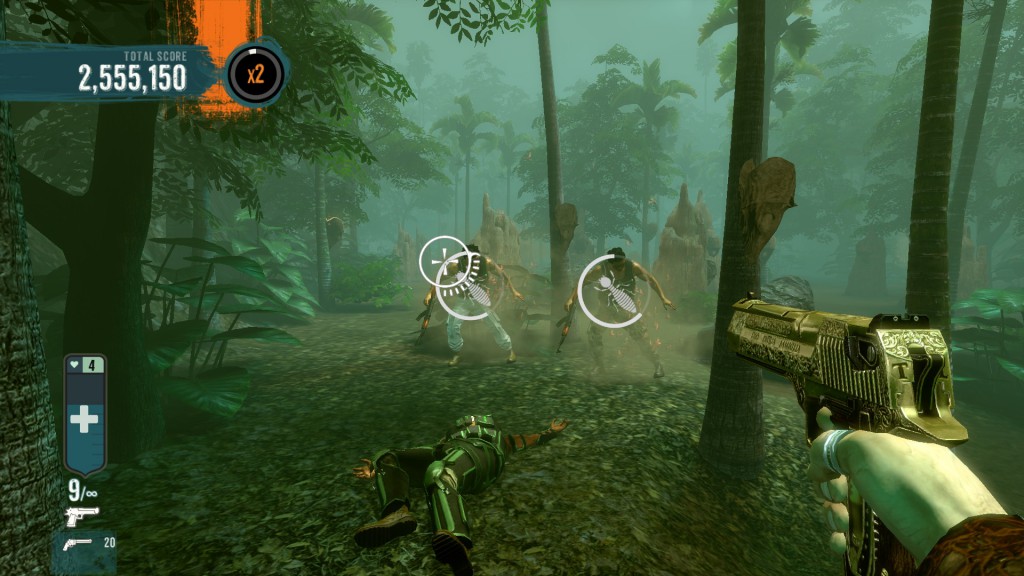 During one mission you can shoot beehives to momentarily distract enemies . We’ll see who brings in more honey.

This is not your traditional FPS game. For better or for worse, Blue Estate  is an on-rails ‘light gun’ shooter. The only caveat is that the light gun in question is your DualShock 4 controller. Aiming is handled by the gyroscope within the controller, so while you don’t have to have it pointed at the TV, it helps if you do, just so you can keep a better handle of where the crosshair is at all times. That said, if you lose track of the crosshair a quick tap of L1 or up on the D-pad will immediately re-center it. Remember that, because you will have to use this function a lot. That is unless you sit lifelessly staring at the screen and don’t move an inch while playing.

There is a bit of a learning curve as you get to grips with how the game controls. The gyroscope is quite sensitive and sadly you can’t alter its speed. Once you’ve got the hang of how it controls you’ll soon be moving from headshot to nutshot with relative ease. A yellow circle on an enemy will indicate the most immediate threat so be sure to take them down quickly, depending on how many enemies are on screen at the time though it’s easier said than done. 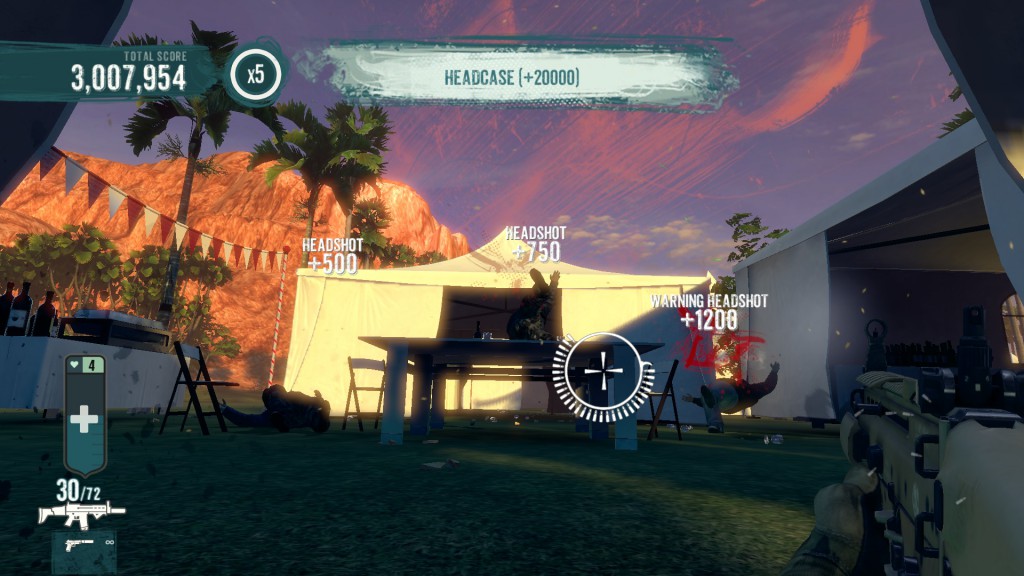 If these things happened once or twice then I would say it added to the humor of the game and I’d consider them a novelty, but having them occur multiple times throughout each mission is just annoying. Especially in the heat of battle when you’re trying to line up your next kill, having Tony’s hair draped over the screen could mean game over if you don’t react quick enough to swipe it away. I can’t help but feel the game would have garnered more popularity if it ditched the on-rails approach and stuck with the tried and true FPS formula. That said, it’s a damn site better than the [similar] Rambo: The Video Game. 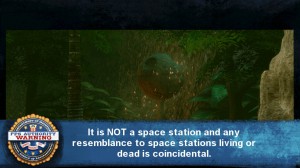 Definitely NOT the Death Star.

At the start of the first mission you get four lives to play with; after that it’s game over and you have to start the mission over from the beginning, no checkpoints, no nothing. However, if you do completely fail a mission you’ll get awarded a permanent extra life that will carry over across all other missions, which is a nice compromise. Luckily, I only failed the first and last mission once apiece, so by the end of the game I had a total of six permanent lives. It doesn’t seem like a huge deal to have to start a mission over as they are quite short anyhow, but I can see it being a pain in the ass on harder difficulties.

While Blue Estate  is certainly nice to look at, I don’t see it winning any graphical awards. The game is similar in looks to The Darkness 2. Cutscenes are presented in a graphic novel style and are quite short in length; you won’t have to worry about any hour long cutscenes here.

We’re in the summer drought of video games. It’ll be another couple of months before the holiday releases start coming in thick and fast, so if your stuck for something to play right now you could do a lot worse than Blue Estate, but at the same time I feel the asking price is a little steep for less than three hours of content. I would advise waiting until the price comes down a little before biting the bullet on this. 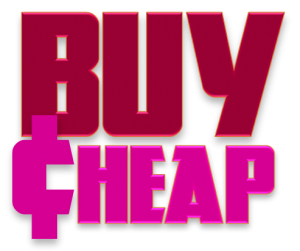 Blue Estate  certainly has its moments. It’s a fun game that’s marred with more than a few moments of frustration. If you’re a fan of classic arcade light gun games then Blue Estate  should be right up your alley. However, its short nature should make you think twice before you part with your cash.

Senior Staff Writer Karl has been an avid gamer since the days of the original PlayStation, it's a passion that took ahold of him at a young age and one that never let go. When he isn't playing games he's usually writing about them, or listening to The Killers. Metal Gear Solid is quite possibly his favourite gaming series of all time, having only initially purchased a PlayStation 3 to be able to experience Metal Gear Solid 4.
You might also like
Blue EstateFPSShooter