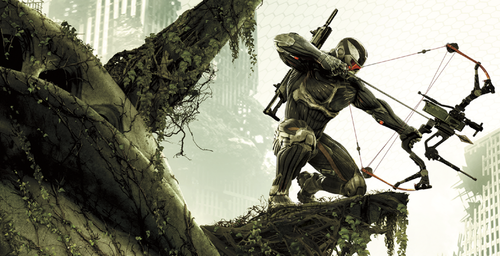 The story is bland and generic

Color me impressed. With some decent improvements made to the gameplay, some amazing improvements to the graphics, a more compact and digestible single-player, and balls-to-the-wall multiplayer, whatâ€™s not to like? Yes there are a few issues with the sound on occasion, and the by-the-numbers Cell and Ceph enemies will get tiring, suit energy management will become a chore, but whatâ€™s here is good and can easily be registered as an improvement over Crysis 2. Give this one a try.

THE NEXT BIG CRYSIS

So here we are again with another Crysis on our plate. Â A little less than 2 years have passed since Crysis 2 came out for the Xbox, PS3, and PC. EA played out the mellow marketing for this iteration close to the chest, and not much hoopla was heard on the news front about this game. The marketing did pick up near the end, and the game came out quietly amidst some relatively subdued fanfare. So is this 3rd game in the trilogy worth buying, or is it just another financial Crysis for prospective gamers? Read on Spawnersâ€¦

Yup. The Cell are back. And so are the Ceph. And so is grand old New York, albeit a more dilapidated version of it twenty odd years later. Our protagonist Prophet (â€¦or is it Alcatraz? With the story as convoluted as it is, who can tell?) comes out from his decades long slumber to kick Cell and chew Ceph, and heâ€™s definitely not out of both.

Psycho, from the original squad comes to Prophetâ€™s rescue, sans Nanosuit, and gives him the heads up about the current situation: the Cell are getting hot and steamy in the jungle that used to be New York, and Psychoâ€™s resistance needs some much needed help. Prophet is ready to go at it, especially since he smells a certain Ceph of-the-Alpha-kind, in the air. Not much more incentive was needed for Prophet to join anyways, seeing as his brand spanking new compound bow was itching for use.

Not to go into too much detail, the Cell/Resistance storyline provides some decent viewing over the 8 or so hours it will take to complete the game, but Shakespeare this ainâ€™t. Expect to be moderately amused with the twists and turns. The storyline in the Crysis series is pretty convoluted overall, and Crysis 3 is more of the same. Just donâ€™t buy the game for its story.

Oh so much better than Crysis 2. The controls feel tighter and more fluid. Almost all the guns have that certain spunk and the kills are very satisfying. The Ceph weapons are aptly alien and look and sound just like Ceph weapons would, if you can imagine that. The grenades are so-so, in that the sound effect for the explosions feel muted, and personally, I think the timer on the grenades is a little bit too long. Cook your grenades before throwing them for the best results, and watch the (muted) cacophony of gore.

The bow though. The bow. The bow. The bow. It makes this game. You really do feel like a genuine hunter in the world and the advertising for once, rings true. The added benefit of firing it and it not breaking your stealth camouflage is the icing on an already tasty cake. Just try using the bow and camo for a stealth run. It hits the spot. You will feel not unlike the Predator, as squads of AI will go crazy and start looking up into the trees. I will rip on the energy meter though; it runs out of juice very quickly if you are doing any two things at once (camo + running, armor +high jump, etc.). In single-player, you will be able to unlock and equip perks that will help you enhance your powers somewhat (quicker camo switch, faster movement when armor equipped, etc.). The wide variety of perks in the singleplayer is a welcome addition.

The levels are bigger than the ones in Crysis 2, although not quite the open sandbox that the original Crysis is. But still, that’s more than enough freedom given to the player to approach a situation in a variety of ways. I definitely enjoyed the single-player in Crysis 3 more than 2. By the way, Iâ€™ve heard people knocking the length of the game. The length for me was perfect (a little over 7 hours of playtime on Veteran difficulty). Crysis 2’s 14 hour playtime for me was stagnant and at times became very boring. Crysis 3 was pure fun and was packed with cinematic and sandbox moments. The perfect length and density for this gamer! And if I haven’t already mentioned it before: play on Veteran difficulty. Normal was far too easy a setting. Veteran is the perfect coupling of story absorption and gameplay challenge.

This is one of those holy-cow-how-did-they-pull-this-off games. The difference between Crysis 2 and 3 is stunning. 2 was already quite the looker, but 3 takes it out of the park entirely. I am amazed that Crytek were able to pull out these kinds of graphics from a 7 year old machine. At the very least you would think that the frame rate would suffer, but surprisingly it stays consistent throughout (seems to be 30fps). The look and feel of any of the levels after the first one, completely envelop you in the environment you’re playing in. The grass swaying, the subtle use of lens-flare (which you can also turn off in the options!), the huge, open sandbox levels, and the look of the NPCs, Cell and Ceph alike. I was extremely pleased with the eye-candy, to be sure.

I’ll say it now: it looks and plays much better than the beta. Actually the multiplayer has been a blast to play through. The graphics are not quite what the singleplayer has, but theyâ€™re pretty close. The netcode (at least for me), was tighter than the beta for sure. The maps are nice and well thought out, keeping in mind the capabilities of the Nanosuit, and the gameplay is intense across the variety of modes that MP offers. I know that MP probably won’t last longer than 6- 8 months, but what’s here is enjoyable and very lively. Great fun, especially the Hunter mode, which I would say is one of the best ones up there along with standard DM/TDM.

The gameplay has been great through and through, in almost every match-made game I have played. Every game has had an “I can’t believe I did that” moment. Let me list the few I remember:

1. Power-stomping down from over 25 feet and taking out 3 snipers huddled together.

2. Sliding down a flight of stairs and getting an awesomely satisfying crotch-shot on an enemy.

3. Sticking a guy across the map on the “Dam” map with the explosive arrow, and watching him accidentally run into a team member, taking them both out.

4. Throwing down C4 in a high traffic area and watching a stealthed enemy walk right into my trap.

5. Â Jumping up into the VTOL ship and taking out both gunners unaware with back melees, and then taking out a third on the ground by immediately manning the turret.

6. Enabling Nano-vision to see and then kill, a stealthed enemy who thought I had no idea where he was.

7. Â Kicking a car onto an enemy who was mortaring my teammates.

The list of fun sandbox moments in multiplayer just goes on and on. Almost every game you play is memorable and you find a few hours have gone by, because you just keep thinking “just ONE more game and then I’ll finish”.

The amount of fun I am having with the multiplayer in this game easily comes close to Rainbow Vegas 2 and dare I say, Halo Reach and Halo 4.

Sure there are some occasions where the connection is not good (I’d say once for me out of every 20 matches), and there are some game types that have a consistently low population. But if you’re like me and you like Hunter, DM, TDM, Max DM, Max TDM, and Cell vs. Rebel modes, there are more than enough games going on. I did not expect multiplayer to be THIS fun.

Sound quality drops in and out, on occasion, especially in the first open area that you get to where the huge towers are (chapter 2). After that it improves through to the end of the game.

Energy meter depletes way too fast when doing more than one Nanosuit action, but you can circumvent this problem by buying perks in the singleplayer that can help.

Not Really an Issue But Stillâ€¦: No co-op mode! I really hoped that the game would have some sort of coop/horde mode. Anything to extend the amazing sandbox experience and enjoy the game with a friend, whether local or online. I won’t knock it against the game, but hopefully Crytek will take a suggestion from this humble review and think about adding in some of these modes for the next installment.

Okay, so I tried the 3D function. It natively splits the screen into two stereoscopic views, so I had to adjust my TV’s 3D function to compensate for that view. In essence, the game looked very nice. The enemies are not really 3D, instead, they look like they would in standard view. NPCs however, do look slightly 3-D. The effect itself seems to apply to your HUD, your weapon (which looks amazing in 3D, btw), and your immediate surroundings. Grass and other plants especially look very well done, as they also move out of your way while you walk through them. Crytek seems to have paid special attention to the flora, as far as 3D effects go.

All in all, I was very impressed with the HUD, the 3D weapon effect, and the immersion you get from walking through grass and such. Overall, it’s on par with Killzone 3’s 3D.

The soundtrack is comparable, if not better than the OST on Crysis 2. This one is more future-techno, but still has the epic orchestral sound of the previous installment. You will find yourself enraptured by some memorable music here and there.

Color me impressed. With some decent improvements made to the gameplay, some amazing improvements to the graphics, a more compact and digestible single-player, and balls-to-the-wall multiplayer, whatâ€™s not to like? Yes there are a few issues with the sound on occasion, and the by-the-numbers Cell and Ceph enemies will get tiring, suit energy management will become a chore, but whatâ€™s here is good and can easily be registered as an improvement over Crysis 2. Give this one a try.

Founder/Consultant Growing up in different countries, Karam has a unique global perspective about gaming. He brings with him that set of eyes and ears that can look at the state of gaming from afar. His gaming loves cover just about every genre, and he is a constant presence on Xbox Live and PSN. Karam is a Systems Administrator by day and lives in Georgia with his wife and three children. By night he transforms into Aye Karamba (Live) or Aaqiloon (PSN), and his virtual aliases live online.
You might also like
crysis 3ps3review