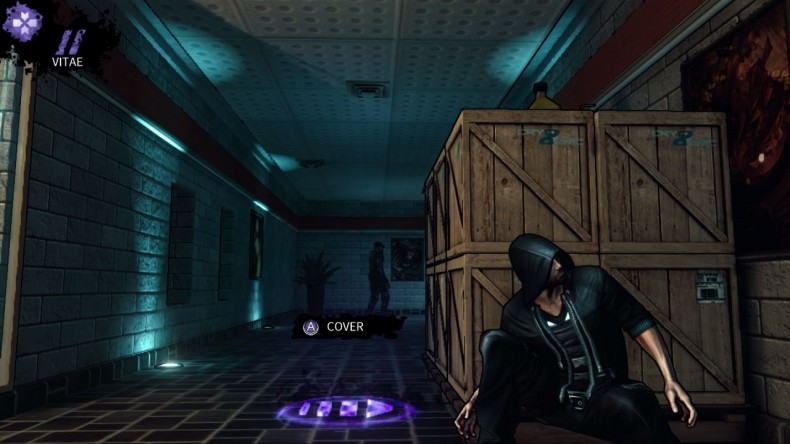 It has vampires in it.

It has utterly unlikeable vampires in it; Nothing about its characters or story is good; It's ugly; The AI is atrocious; It fails in every way imaginable

I have nothing but contempt in my heart for Dark. It drained me emotionally in the worst way possible. It left me feeling empty and spiteful. It's a sloppy, sad abortion of a video game.

Being a Vampire Sucks

I made “Being a Vampire Sucks” my heading for a reason. I wanted my laziness in writing it to reflect the effort Realmforge Studios put into Dark.Â  DarkÂ  ranks among the most half-assed stealth games I’ve ever played. It’s a failure on every level: gameplay, execution, graphics, etc. I rarely hate games no matter how bad they are. I can usually ring some sort of enjoyment out of even the worst of the worst. I absolutely despised every minute of the time I spent with Dark. A guy wakes up in nightclub named Sanctuary and can’t remember how he got there. His name is Eric Bane, and he comes to find out he’s been turned into a vampire. The owner of Sanctuary informs him that he must drink the blood of an ancient vampire soon or he’ll transform into a “ghoul,” which is a hideous, pupil-less creature with long fangs. It’s an interesting setup for a story (aside from the overused “I don’t know who I am!” plot device) that goes nowhere except in the crapper. The awful narrative is in place to lead the protagonist on a pointless journey. The writing wouldn’t cut it in a sixth-grade English class. DarkÂ  seems as if it’s going to be like other stealth games in the beginning. Eric must stick to cover and stay out of sight or else suffer the consequences. If an enemy is alerted to Eric’s presence and other enemies are nearby, death and a loading screen are probably in Eric’s near future. I learned quickly that taking down an enemy from behind and then disposing of the body is the best route to take. Aside from just killing an enemy, Eric also has the opportunity to drink their blood, which grants him “blood points” aka special abilities.

These special abilities range from Eric being able to make himself less audible/visible to being able to choke an enemy from across a room. He only has two blood point slots to begin with, but he can gain up to four through the game’s leveling system. DarkÂ  does contain some RPG elements, which is a rarity for a stealth game, but they are very useful. The most essential upgrades are the ones having to do with Eric’s attacks, health and maneuverability. Everything else is optional and, as the game goes on to prove, useless.

As enemies in games tend to do, the enemies in DarkÂ  become tougher as the game progresses. Some of them begin wearing armor that prevents Eric from drinking their blood (he can still kill them). Towards the end of the game environmental hazards such as UV light generators and sensors that activate alarms become commonplace. Dark Â is tough even on the easiest difficulty, but its unforgiving nature has everything to do with poor design and nothing to do with Realmforge actually wanting to create a challenging game. I’m getting sick of developers using cel-shading in an attempt to cover up obviously ugly games. Grasshopper Manufacture tried it with the cornea-damaging Killer Is Dead,Â  and now Realmforge Studios has tried it with Dark. Â However, Dark Â can’t even manage a single bit of the flair that Killer Is Dead’sÂ  visuals sometimes had to them. Every character in Dark Â looks like a brain-dead idiot. Every environment is dark and muddled and filled with textures that look like they belong in a game from 2002. The Legend of Zelda: The Wind Waker Â released in 2003 and looks way better thanÂ Dark.

Eric looks like a drug dealer. All I could picture the entire time I was playing DarkÂ  and sneaking around with him was that he was on a mission to sell cocaine to some children. He runs like a monkey on a moving sidewalk. Every human or creature in Dark Â moves around stupidly. Their lips don’t match the words they’re saying. The animation is laughable. For example, if a character is talking to Eric while typing on a keyboard, they’ll keep typing even if they’re staring directly at him.

I’m no stickler for graphics, but DarkÂ  is buggy as hell on top of being ugly as hell. Eric constantly clips through environments when using his special abilities. I lost count of how many times I saw an enemy stand in one spot and spin around in circles. I also witnessed a guard clip through an entire cubicle. Enemies in Dark Â can’t enter doorways. They literally cannot enter doorways. If they attempt to they get stuck for several seconds and then turn around and walk away.

I expected DarkÂ  to at least have some killer music in it with it being a vampire game and all, but I was mistaken about that as well. It’s all electronica and wub wub wub and crap. The one good song in the entire game, “Dark Inside” by Sonja Kraushofer, plays endlessly every time Eric is in Sanctuary. I actually got nearly nauseous from hearing it so many times. Sanctuary is a nightclub that has disc jockeys and strippers, but the owner can’t afford to play more than one song apparently. Oh, it gets worse. On top of everything else, Dark Â doesn’t function properly. As I mentioned, it’s buggy, but it also fails miserably in its gameplay. It breaks its own rules constantly. It forced me to use stealth, but then it punished me even when I did.

The enemy AI is unpredictable and abominable. Sometimes an enemy can be standing directly beside Eric and still not see him. Sometimes they’ll spot him from across a room. It’s nearly impossible to determine when Eric is going to be spotted. I never hear someone yell “I got him!” when I’m behind cover and 150 feet away from an enemy in a Splinter CellÂ  game. Dark Â is filled with annoying bouts of trial and error. It rewards precision with failure.

Sorry to keep hammering nails into this coffin made entirely of nails, but DarkÂ  also features one of the worst save systems I’ve ever experienced. No manual save exists in the game. Death in Dark Â sometimes means restarting an entire mission. Sometimes it means a checkpoint from a few seconds ago. It doesn’t make any senseâ€”not that I expected it to.

Some games are so bad they’re good, and some are so bad they’re terrible. Some are so terrible they should be used as toilet paper. I would be beyond thrilled to wipe my ass with Dark.Â  I mean seriously, how are games like Dark Â still being made in this day and age? It’s embarrassing. I have nothing but contempt in my heart for Dark.Â  It drained me emotionally in the worst way possible. It left me feeling empty and spiteful. It’s a sloppy, sad abortion of a video game.

Features Editor Buddy was a journalism major at the University of Alabama. He now spends his days writing novels that will probably never get published and wishing he were an extra in an Anthony Hopkins film. He's been gaming since he can remember and has owned every console from the NES to the TurboGrafx-16 to, yes, even the Phillips CD-i. He loves all games, but his favorite genres are shooters and RPGs. His favorite game is The Legend of Zelda: Ocarina of Time.
You might also like
darksplinter cell