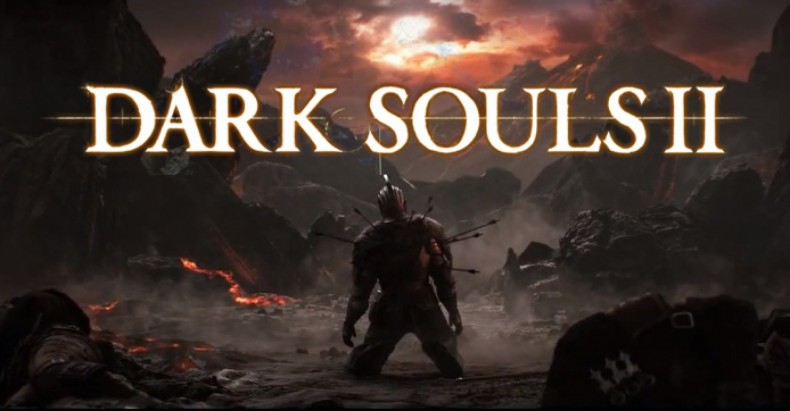 A few bugs that mess with controls and AI; Important items are way too scarce; unbalanced in some areas

Despite a noticeable lack of polish in some areas, the core gameplay and difficulty the series is so famous for stays perfectly intact in Dark Souls 2. Enemies and bosses are absolutely relentless and will stomp you into the ground more times than you can count. But, when you finally, finally grasp victory, holding it dearly in your shaking, clammy palms, an overwhelming sense of accomplishment washes over you, encouraging you to press forward and get your ass kicked all over again.

“Your second batch of controllers just came in”

â€œI hate this game!â€, I shout to an empty room as I toss a DualShock 3 controller across my bed. Frustrated, I hold my head in my hands and breathe slowly, pondering my next course of action. I look up and gaze at the message â€œYOU DIEDâ€ branded mockingly across my TV screen. My brain is swirling with questions: Will I be able to beat this boss if I try again? Where the hell can I get more Human Effigies? Should I even bother pressing forward?

I shoot an angry glare at my controller as I crawl towards it once again, picking it up, and letting out a deep sigh. This is Dark Souls, alright. It’s just as maddening, brilliant, and engulfing as it ever was. It will punish you for impatience, ravage you for recklessness, and demean you for simply not being good enough. The extreme difficulty works in Dark Souls 2’s favor. It’s seldom unfair or cheap; most deaths are a result of the players lack of skill, yet failure is the driving force of improvement. The game wants you to get better, it wants you learn the mechanics inside and out so that you may conquer the seemingly unconquerable. Enemies and bosses are intimidating at first glance, but a careful review of their habits and dispositions will reveal their weak points, eventually empowering the player to stomp out all opposition.

Unlike many RPGs, however, this sense of empowerment does not come from grinding out levels or upgrading armor and weapons. While these prospects are certainly important, players will only progress when their skill and wits outclass that of their enemies. Increasing soul level can be helpful, but without a rock solid strategy and quick reflexes, you won’t be going anywhere.

Dark Souls 2 takes a lot of queues from the game that started it all, the infamous Demon’s Souls. It features a hub world where you can access the essentials, such as a blacksmith, armor and weapon merchant, and an almost disturbingly melancholy woman who will allow you to level up when needed. This area, named Majula, is a place of peace and safety, giving players a chance to breathe, take in the scenery, and get lost in the haunting soundtrack.

Travel is also similar to Demon’s Souls in that it is streamlined right from the beginning. It retains the open world approach that was so successfully done in Dark Souls, but allows for faster travel and less tedium, since fast traveling is allowed immediately and can be used to teleport to or from any checkpoint.

The basic mechanics haven’t changed much from Dark Souls, but that’s for the best. Players have a large range of combat options to explore: From backstabbing and parrying to light and heavy attacks, combat offers up a variety of branching decisions, allowing total freedom of choice in taking on some of the trickier foes. And you’ll need that variety, as the grotesquely creative opponents will each have their own move set to test the limitations â€“ and patience – of the player.

Unfortunately, the controls are not as precise as they desperately need to be. Where as Dark Souls offered some of the tightest controls I’ve had the joy of toying with, Dark Souls 2 suffers from the occasionally unresponsive input. These instances are few and far between, but seem to happen at the worst of times. I have died on several occasions due to the game refusing to recognize whatever action I attempt to initiate, adding extra frustration to an already brutally tough experience. Additionally, it would sometimes appear that certain actions can switch buttons entirely, with no warning whatsoever. I recall a number of fierce fights that were suddenly interrupted by my character taking a swig of their Estus Flask, even though I was certain I had done nothing to cause such an event. This resulted in a quick death and a seriously upset player.

I’m confident this is simply a glitch that will eventually be patched out, but its presence is annoying enough that it can noticeably detract from the overall experience. Alas, this isn’t the only bug that hurts Dark Souls 2. The player-character hitbox needs some serious work; enemies will sometimes damage you from a distance or before their animation is finished, causing a number of infuriating deaths in which the player can not be blamed. This problem stings extra harshly in a Souls game, where the design has so much focus on being fair and well-balanced. 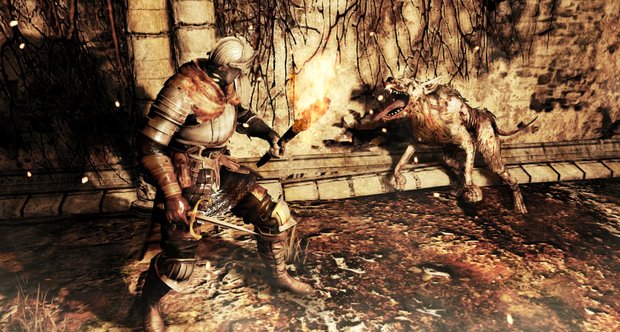 Also, the enemy AI is generally very intelligent and ruthless, but at times they become beyond dimwitted. Wandering around aimlessly and ignoring the player, getting stuck on ladders, and spinning rapidly in place are just a few of the things I noticed in my time with the game. This isn’t always a bad thing, though; for the most part, it’s harmless. It adds a goofy magic to an otherwise dark and dreary world, acting as comic relief when you’re at your wits’ end. Still, it’s a bug that needs patched, as it damages the engaging atmosphere that the game does so well.

Speaking of atmosphere, the audio and visual design of the Souls games have always been one of their more enticing features, and Dark Souls 2 does not disappoint. Architectures are towering and gloomy, drenched in a solemn color scheme of gray and black with brighter colors accenting all the right places. A soft, minimalist soundtrack looms quietly over the land of Drangleic, giving a sense of dread that’s unmatched in its perfect restraint.

From Software’s unique take on multiplayer is back with a few small changes. Humanity has been replaced with Human Effigies, which, unfortunately, are pretty hard to come by. Enemies will now disappear after their twelfth death, so any opponent that might drop this extremely valuable loot is a resource that will be quickly depleted. A handful of merchants sell it, but they all hold limited supplies, meaning there is a finite number of Effigies in the whole game. It feels very unbalanced and aggravating, especially since human form is required to summon other players and keep your health filled. This makes bosses exceptionally more difficult and can turn Dark Souls 2 into a lonely experience.

Interestingly, players can now invade the world of the hollow or the human, meaning no one is safe from a random assault from another player. I have mixed feelings about this: On the one hand, it adds an element of fun and surprise. Random invasions can be a formula for intensity and hilarity as you battle it out with someone else. On the other hand, there’s no longer control on when you want to take part in PvP. If you get invaded, you either fight, run, or die. This is annoying when you’re suddenly invaded while fighting some tough enemies, mostly because your resources are drained and you are in no shape for a surprise brawl.

Dark Souls 2 is frustrating, annoying, and brutal as all hell, but a bit of patience will reveal its massive open world, amazing combat, and addicting progression. Certain areas are unbalanced and buggy, yet the core gameplay remains to be one of the most mechanically deep and engaging experiences that we have been blessed with this past generation. If you have enjoyed any of From Software’s games before this, you owe it to yourself to pick this up.

Senior Staff Writer Colton Steury is a musician, writer, and fervent gamer who enjoys most any games, but is especially fond of RPGs, platformers, third-person shooters, and indie games. When he's not writing articles, composing songs, or gaming, you could probably find him eating potato chips and petting a cat. Generally, he is willing to accept potato chips/cats as currency.
You might also like
Bandai NamcoDark SoulsDark Souls 2