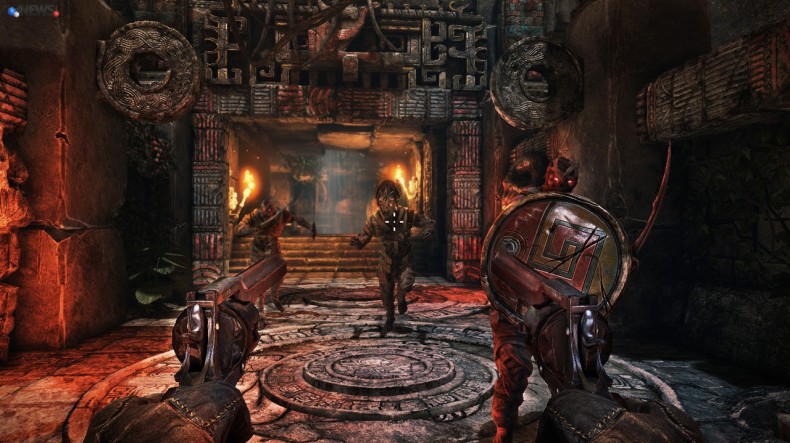 At a $40 price tag, this game is fun but not worth that much with the low grade story, poor voice acting, and irritating puzzles. If youâ€™re willing to look past its flaws, Deadfall Adventure has a sort of charm that you canâ€™t help but enjoy.

Why respect ancient artifacts when you can blow them up?

Deadfall follows the story of James Lee Quartermain, great grandson of famous adventurer Allen Quartermain, as he searches for the mysterious, ancient relic: the Heart of Atlantis. With the help of his companion, Jen Goodwin, he fights off mummies, Nazis, and Russians in the race for the Heart, as well as solving complex puzzles and avoiding traps along the way. While this all sounds fine and good, the story of Deadfall isnâ€™t anything to write home about, and at many times didnâ€™t keep me entertained. In fact, with the terrible dialogue and predictable story, it’s borderline abysmal. Its only saving grace was Quartermain himself, who, although he acted like a poorly scripted Indiana Jones/Han Solo love child, had some good one-liner references to Indiana Jones and other typical action movies. Itâ€™s as if the writers knew how clichÃ© the story was and decided to poke fun at it along the way.

Gameplay in Deadfall is a roller coaster of good and bad. At moments I truly enjoyed it, like playing a level oddly reminiscent of the mine cart chase from Indiana Jones and the Temple of Doom. Other times, it was brutally frustrating, with vague hints on how to complete a puzzle or very distant checkpoints. In a game like Deadfall, you have to try to take the good with the bad.

Controls in Deadfall play out very similar to that of the Call of Duty franchise when it comes to running, shooting, and aiming, but also uses the flashlight element from Alan Wake to defeat your undead enemies. This interesting hybrid of games played well enough, but had a few flaws. The most notable (and annoying) for me was after I auto reloaded an empty clip while aiming down the sights, it didnâ€™t return to aiming down the sights, despite me still holding down the left trigger. This resulted in me taking several very inaccurate shots before I realized what happened. 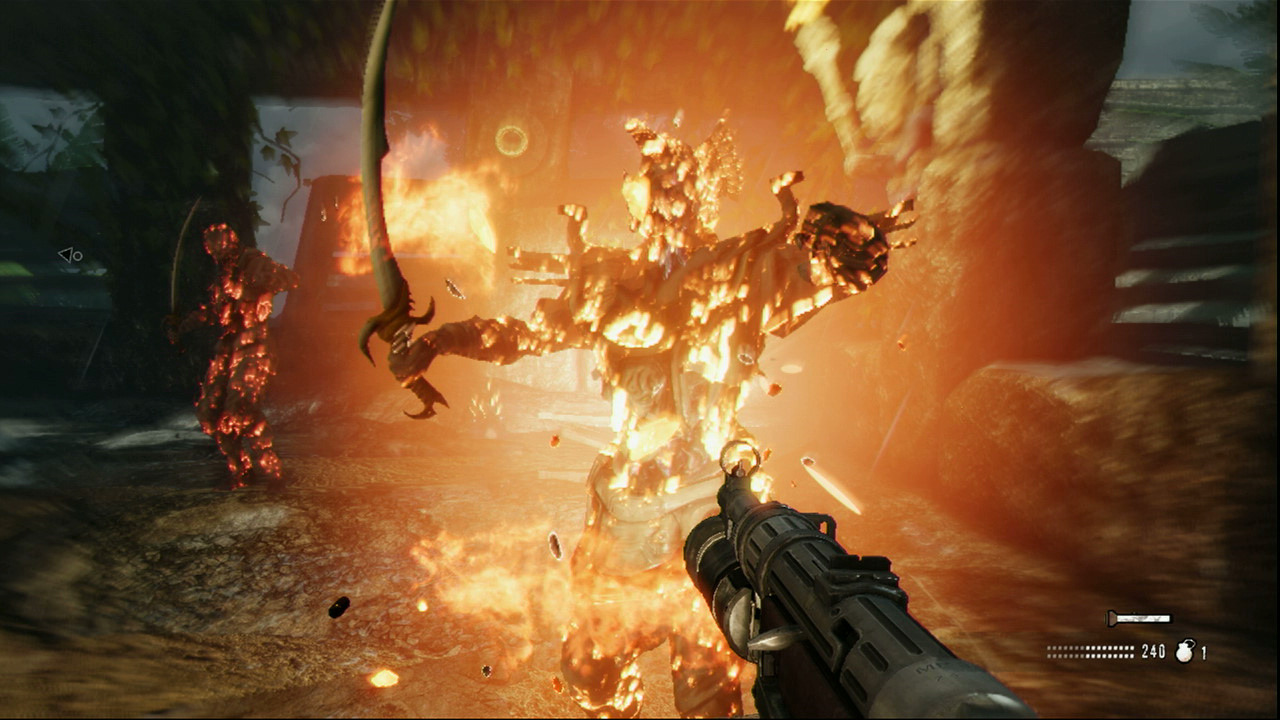 The enemies that you fight over the course of the game are moderately intelligent. The Nazi and Russian soldiers have some idea of self-preservation but no variation in enemy type. Meanwhile, the mummies have no sense of self-preservation (but why should they? Theyâ€™re already dead) but had several different types of mummies to fight. All the enemies brought a unique experience but these experiences are ruined when the walls you hid behind rarely stop bullets, no matter how thick they are.

Puzzle-solving is a major part of Deadfall‘s gameplay. Some puzzles are very easy, especially if youâ€™ve played any of the Zelda games. Others are downright impossible, even with the hints that your great grandfather left you (seriously, did he do all these puzzles before?). There were even several times where I had to resort to an online walkthrough to help me advance my progress; it wasnâ€™t something I was proud of.

For a different take on Deadfall Adventures, check out SlasherJPC’s video review below, before heading back to read Brian’s nail-biting conclusion.

Deadfall is a mix bag of good and bad graphics. The characters, guns, and vehicles all look from early in the 360’s life cycle at best. On the other hand, the surrounding environment looked gorgeous (most of the time), rivaling that of larger developers.

The sound was also a split decision. The voice acting was dreadful, partially due to the fact that the script could have been written by a 12 year old. For some reason, whoever wrote the script was REALLY into the name â€œQuartermainâ€ and clearly went out of their way to fit it into the script every chance they got. The musical scores, on the other hand, are both catchy and epic, giving off the feel of a high quality adventure game.

Deadfall has both competitive and cooperative online multiplayer. Â However, I was unable to enjoy either of these features because, after waiting 20 minutes, never found a single game. I was able to get into cooperative, horde-mode style multiplayer all by my lonesome, but, while it was entertaining, just wasn’t the same on my own. 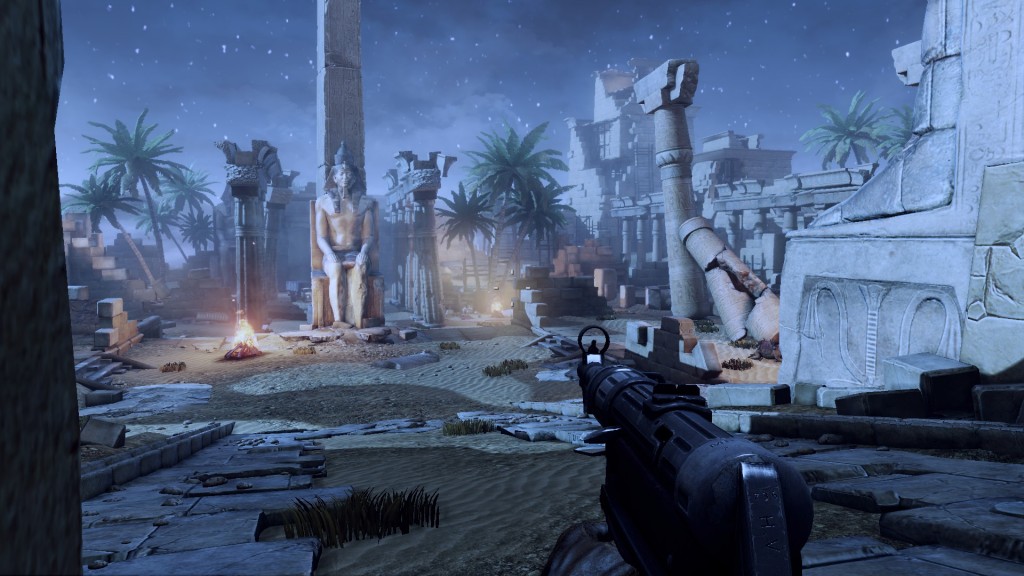 I experienced a few technical issues over the course of the game. I would get killed by ghost enemies, get hit behind cover when itâ€™s impossible to get hit, and one time I completed a puzzle and the door to the next room didnâ€™t open. Aside from these scarce issues, the game ran smoothly.

There are dozens of artifacts hidden throughout the levels that allow you to upgrade Quartermainâ€™s skills. Theyâ€™re all hidden in either obscure places or protected by traps of varying difficulty. While some of the artifacts are hard to find/a pain to get to, theyâ€™re worth finding to make surviving the campaign a little easier.

â€¦like VERY cheap. At a $40 price tag, this game is fun but not worth that much with the low grade story, poor voice acting, and irritating puzzles. If youâ€™re willing to look past its flaws, Deadfall Adventures has a sort of charm that you canâ€™t help but enjoy.

SpawnCast Co-Host/Creative Co-Director Brian is member of the University of Mary Washingtonâ€™s class of 2012 and graduated with a BS in Computer Science. He has been gaming since the first day he held an original GameBoy in his hands and hasnâ€™t stopped since. He now plays mostly shooters and RPGs on his Xbox 360 but will occasionally work in some sports or fighting games when heâ€™s in the mood. He is also a huge fan of playing marathon sessions of Legend of Zelda when the opportunity arises.
You might also like
ActionDeadfall AdventuresXbox 360