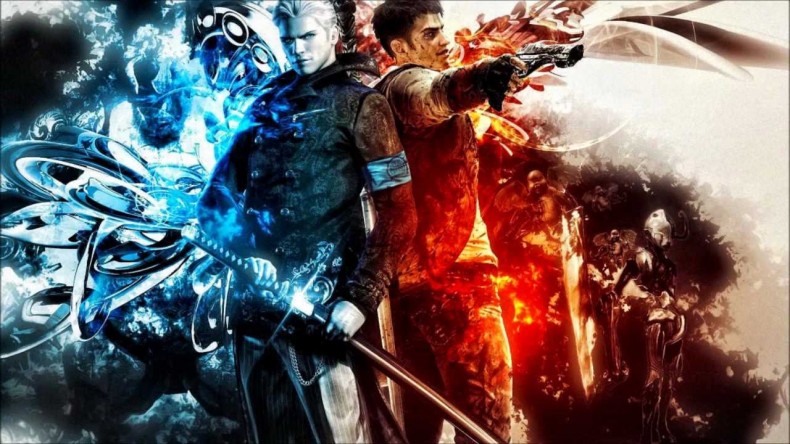 Optional missions too easy, some story elements out of place, no lock-on feature, boring bosses, music depends on player's tastes

Aside from some problems with the story and difficulty, Ninja Theory has done a good job with the Devil May Cry reboot. Any fans of the series who are on the ropes about this game should put away all preconceived notions and give this game a fair trial before condemning it. The combat is still fast, fluid and stylish and Dante is still the same character, just with a few extra layers and a new haircut.

There has been a fairly large amount of controversy with the reboot of Devil May Cry.Â  When the aesthetic changes to the series’ iconic character Dante were revealed, fans of the franchise were immediately skeptical if Ninja Theory was up to the task of creating a new Devil May Cry; luckily for the fans, they were a good choice.Â  DmC may have a significantly different art direction, but it is still at heart, a Devil May Cry game.

DMC focuses on the origins of Dante and how he became the brash, cocky demon hunter from the first games.Â  Dante, a man who is half demon and half angel, has been hunted his entire life by the forces of darkness.Â  After a night of heavy drinking and partying, he meets a young woman named Kat who tries to recruit him into a group of demon hunters called The Order.

The leader of this group is no other than Dante’s twin brother Vergil, another iconic character from the series.Â  After revealing their family’s tragic past, Dante joins the group without question to defeat Mundus, the king of the demons.

DMC’s story is miles away from the campy, yet fun, stories of the previous Devil May Cry games not because of its plot, but because of its strong focus on the characters.Â  Dante is very rough around the edges in the beginning.Â  He is alone, an outcast and because of his tragic past, he tends to be an ass.Â  Dante is rude, untrusting, rebellious, and selfish at the start, but is still the cocky trash talker players know and love.

Dante has a strong character arc which could easily be relatable for many people.Â  The relationships with Vergil and Kat evolve Dante’s character from a punk to the hero of the original games.Â  The interactions between Dante and Virgil are well done and believable; in one point in the game, the two siblings get into a brotherly argument about who’s the best of the two.Â  Almost everybody who maintains a good relationship with their brother has probably done this, I know I have, and it adds some humor to the mostly serious story. 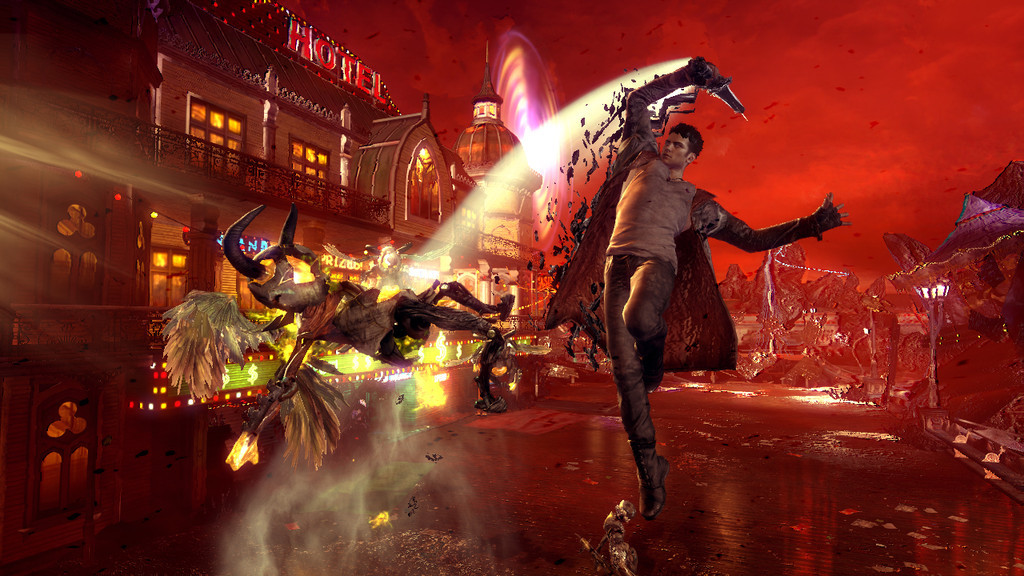 Unlike the goofy and less serious Devil May Cry games, DmC is a much more gritty tale.Â  The plot revolves around how Mundus took over the world of humans through debt, subliminal messages, controlled media, and various other forms of mind control.Â  It’s nice to see more stories in video games using relevant themes, but the messages implied are less than subtle.

Mundus is a worthy-enough antagonist to return to the world of Devil May Cry.Â  Even though he may be a bit cartoony like most supervillains, he does something most hardly ever do today; he justifies his actions with some decent reasons.Â  No normal person in their right mind would completely agree with this evil creature, but he does make some valid points.

While DmC does have a good story, it is not perfect by any means.Â  There are two scenes in the game which seem to be in the game only for shock value.Â  The first doesn’t serve much of a purpose to the narrative and is tasteless.Â  The other is relevant to the plot and serves as both character development and resolution to a problem, but it is a very dark resolution.

The only element drastically changed in DmC is the art direction and the story structure; gameplay on the other hand is still the same stylish hack-and-slash action it has always been.Â  Dante’s main weapons are his signature sword, Rebellion, and his dual pistols, Ebony and Ivory.Â  Each weapon has a dedicated attack button and the melee weapons also have a launcher button used to throw enemies up into the air for a juggle combo.

A new twist on the gameplay comes in the form of demon and angel weapons which are used for offensive and defensive attacks along with abilities used to get around the game’s environments.Â  Demon weapons are used to pull enemies and objects and angel weapons are used to quickly pull Dante towards said enemies and objects.Â  By holding down one of the two trigger buttons, Dante will equip one of these new weapons.

When Dante isn’t in the middle of a fight, he must traverse through the dangerous levels by using a combination of both weapon abilities.Â  The focus on the previous games was the complex combat while platforming was nonessential with the exception of hard to reach objects, but in DmC, it takes over once the fighting has stopped.

Thanks to the great level design, traversing across stages is fun and has a good difficulty curve.Â  In later levels, players must switch between both weapons on the fly to progress through the level and some require a fairly good amount of timing to get past hazards; the only downside is levels are linear and contain few branching paths.

There are other weapons and guns found throughout the game and can be equipped by pressing the d-pad.Â  The new control scheme has been streamlined and the combat is easy to pick up thanks to this.Â  The only downside is players can no longer lock onto a enemies.

Aside from the new bells and whistles, the combat in DmC is just as stylish, fun, and complex as the previous games; there is a variety of enemy types, bosses, and players are still rewarded for long stylish combos.Â  Style and finesse is the focus of the game’s combat, though I did feel the highest style rank to be a little too easy to pull off.Â  The game in particular also felt easier than the other games as well.Â  Luckily, there are plenty of difficulty settings for both veterans and newcomers; I just happened to overestimate the game and chose the wrong setting. 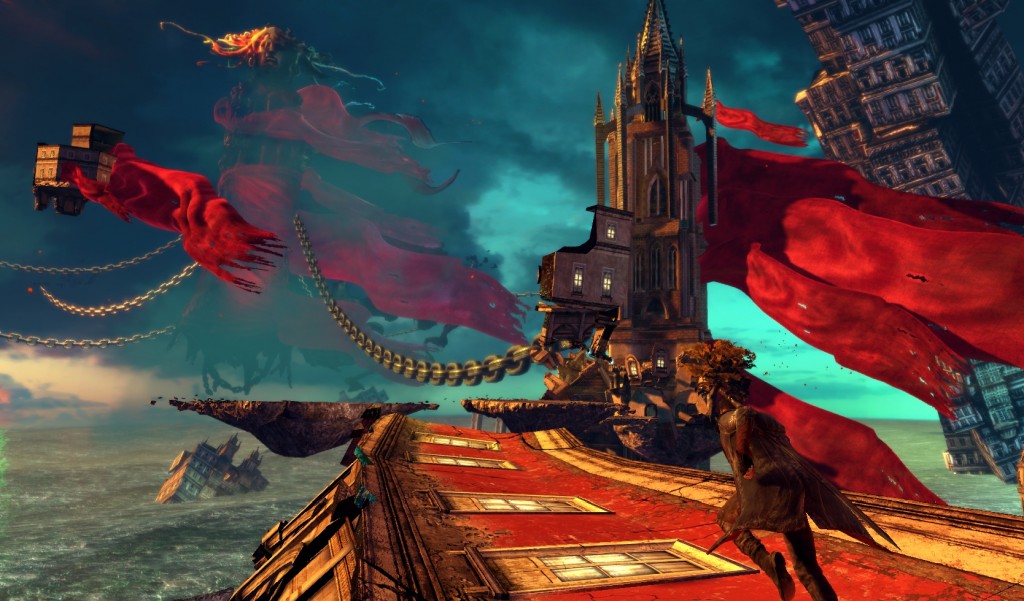 The only area of the game that falls flat is the boss fights.Â  In regular combat, players are given freedom on how they wish to win the fight as stylishly as possible, but bosses revolve around figuring out their attack patterns.Â  Don’t get me wrong, they look great, it’s just the same strategy applies to all but one: dodge, wait for opening, attack, back off, and repeat.Â  Ninja Theory does make up for this problem with a great final showdown that, like most video game finales should, serves as a final exam for the player.

Aesthetically, the game looks great, though the character designs for Dante and Virgil are either going to be a hit or a miss with fans.Â  In the game, the real world looks like it has been drained of life by the demons through the use of a more neutral color palette and the world of Limbo is colorful and surreal.

Average, everyday locations become twisted and horrific whenever Dante is pulled into Limbo and show a great deal of creativity from the developers.Â  The most notable level in the game is an upside-downÂ  demon prison in Limbo, which is the reflection of Dante’s city on a river in the real world.

Sound design has been done well and the voice acting is good, even when Dante’s actor must pull off a cheesy one-liner.Â  The only problem with the sound design is the background music during fights.Â  To be fair, DmC does have the best music in the series, the bar was not set very high in this department, but because it was composed by the groups Noisia and Combichrist, it comes down to a player’s tastes in music.Â  Even though I don’t care for it, the music does match the theme and tone of the game.

Optional missions are back and this time with a vengeance.Â  Instead of just finding these missions hidden in the level, players must also findÂ  a key that corresponds with the mission’s door.Â  Both are these are hidden throughout the levels and some can only be unlocked after receiving a new ability found later in the game.

Completing these missions rewards players with upgrades, but finding them and their keys is more difficult than completing the missions.Â  Optional missions were deviously hard in the other games and the DmC missions are pathetic in comparison.Â  The decline in difficulty tears away any feelings of accomplishment from seasoned DMC players.

While the overall story is good, it is not perfect due to some questionable scenes and a few pieces of dialogue.Â  In the combat department, it’s feels strange not to be able to lock onto enemies and bosses sadly aren’t as fun as they should be.Â  The only other issue in the game is the game’s easier difficulty level, but this only applies to long-time Devil May Cry fans.

DmC is worth a buy for Devil May Cry fans and gamers who like action games, though gamers who like to get 100% completion or achievements will get the most out of this game.Â  If you are still on the fence about the new design, at least give it a rent; it’s worth it.Â  Remember, this is Ninja Theory’s first Devil May Cry game and a prequel at that.Â  If given the chance, maybe Ninja Theory could bring the series to new heights.

Former Contributor Chris West is a graduate of Texas Tech University where he earned his BS in Electronic Media in Communications. Chris has been passionate about games since he was a kid and today prefers games with a strong narrative. He also has a soft spot for horror games, legitimately scary games mind you, and any game claiming to be challenging, Dark Souls for example. When he isn't playing games, he is pursuing his other passions: music and photography. Chris can play both guitar and bass and then take high quality pictures of the performance with his camera. In the end, Chris enjoys writing about his passions and ideas, when he isn't destroying his friends in Call of Duty.
You might also like
CapcomDevil May Cry