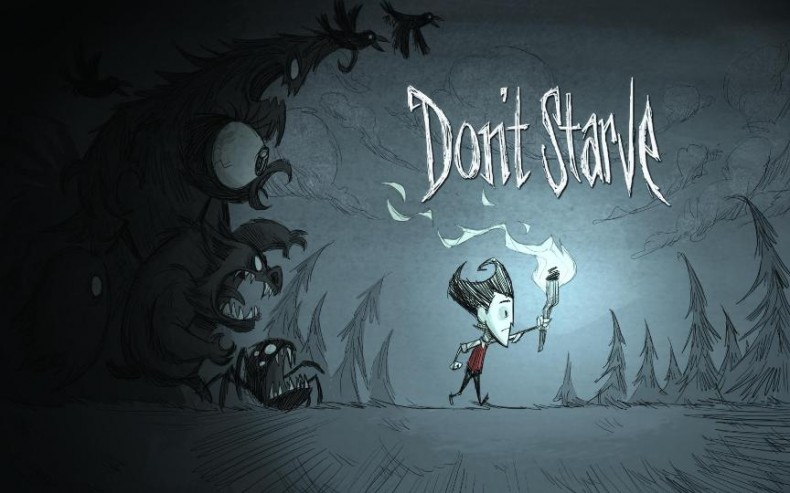 That permanent death thing is a total bummer.

If youâ€™re a fan of clever, if sometimes grueling strategy games with unique characters, actions, and responsibilities, this is probably the game for you. The constant updates offer possibilities for new gameplay, and persistence is rewarded with the new characters. Thereâ€™s a lot of gameplay packed into what will feel at first like a little game-- just be sure to give it the time it deserves. Don't Starve is often difficult, occasionally not fun, but always entertaining. Itâ€™s only available on Steam for right now (Mac and PC), but it was announced last month that itâ€™ll be available for PS4.

Donâ€™t StarveÂ is an adventure-strategy game that rewards players for their longevity and patience. With loads of customizable elements, interesting player-characters, and a haunting and often macabre tone, it’s worth playing and replaying– except when a sudden permanent death leads you to despair. Klei Entertainment boasts the game as “An Uncompromising Wilderness Survival Game Full of Science & Magic!”, which is pretty darn accurate.

Donâ€™t StarveÂ begins, rather abruptly, with Wilson, the Gentleman Scientist, in a wilderness of unknown origin. A well-dressed man named Maxwell tells you to make sure you find food before nightfall and then disappears into the ground, and youâ€™re off to the races. Part of the challenge of Donâ€™t Starve is in establishing your own strategy, absent any kind of guidance. When you begin,Â Donâ€™t StarveÂ offers virtually no explanation beyond that well-manicured man, who provides the best piece of advice you can get (literallyâ€” donâ€™t starve). From there itâ€™s up to you to figure out where your base camp should be located, what the most valuable resources are, and how to kill spiders and beefaloes and rabbits (who run off screaming in ways rabbits shouldnâ€™t but that seem totally appropriate for this game). Survival itself is largely the point, but along the way youâ€™ll discover strange creatures, odd locations, and things that want to kill youâ€” and often do. 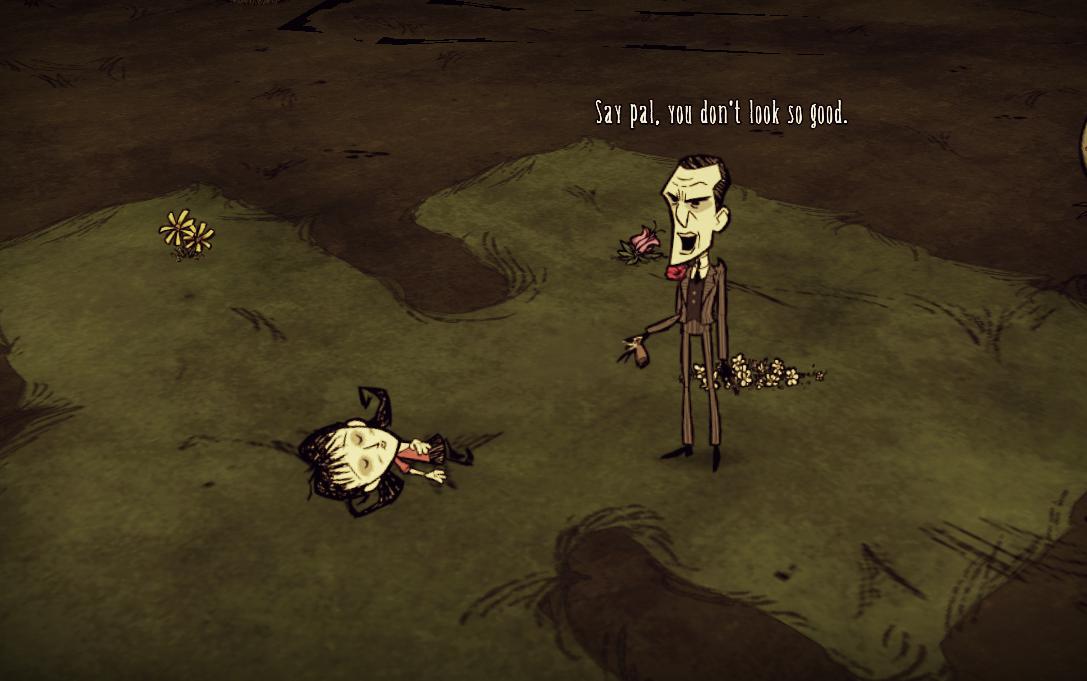 To talk more about the story itself is to reveal some key moments that are better left discovering on your own, but a sense of Ronald Dahl-like whimsy and a sly sense of humor and the stray reference for astute gamers (â€œAnd you thought they smelled bad on the outsideâ€) makeÂ Donâ€™t StarveÂ subversively and quietly funny. Â The final moments, if you make your way there, present a rewarding twist ending to this macabre little gem.

Donâ€™t StarveÂ is deceptively straightforward, as you gather and hunt and collect and build and combine. In the early days, itâ€™s easy to forage for food, fulfilling that one primal need youâ€™ve been directed to pay attention to, but the more you plunder the land, the fewer carrots and berries are available to you. Youâ€™re forced to adapt in new and creative ways. You have three stats to keep track of: your hunger, your heart, and your sanity. Each are impacted by different things, such as eating (obviously) and sleeping, and all of them need tending to. Your hunger can deplete surprisingly quickly, and food is not always readily available.Â  Youâ€™re also constrained by other needs, and there are moments where you will have to tear off away from an unanticipated enemy.

The world of the game is customizable, from the amount of carrots to the presence of a cave entrance (a new addition as Klei continuously updates the game). This, in effect, is a way of impacting the gameâ€™s difficulty, but it also shifts the gameplay dynamics in ways that are worth exploring. You can change the length of day, length of seasons, and a variety of other factors that will shift the way you have to play the game– and the measures you go to in order not to starve. 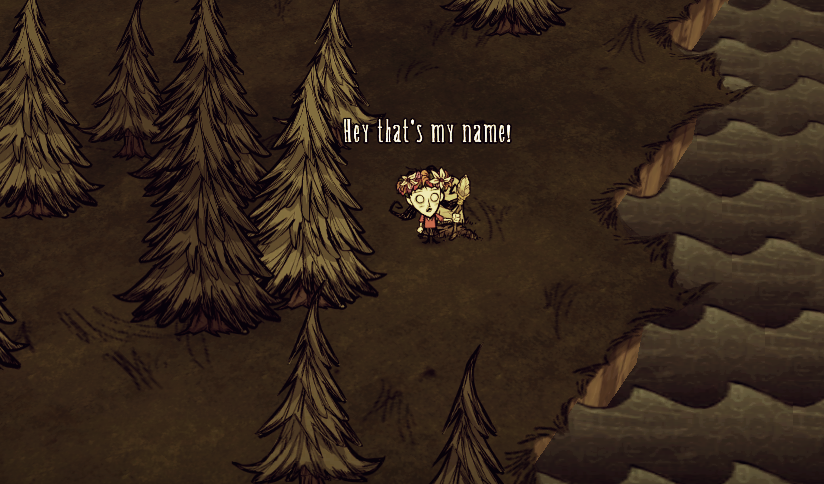 It’s like the gravemarker is just preemptively warning you.

Of note, the frustrating moments come at the point of death, which renders the game completely and unequivocally over. You drop dead, the things youâ€™ve endeavored to collect in a pile around you.Â  The first time it happens, a stunned feeling might wash over you. If youâ€™re like me, youâ€™ll ask yourself, â€œWait, really?â€ And the answer is yes. Yes, really.

One of the side benefits, however, to dying is the gain in XP that unlocks additional characters all with their own unique skill sets, to include a firestarter, a girl who sees her own twin’s ghost, and a robot. This makes the game immensely replayable, since those skills force you to adapt in completely different ways from character to character. There’s an element of trial and error, andÂ you could easily log hours upon hours just trying to figure out how to navigate the world (and you probably will). Some things work better short-term, some long-term, and you wonâ€™t know what those are until you try them. Thereâ€™s no right or wrong way to play it, unless you starve. I ran around the map first thing, which ended up being pretty poor decision making.Â If you’re anything like me, it’ll take some time to adjust to and find your own modus operandi,

I’m pretty sure I dreamed up this thing when I was four. I think I worried it lived under my bed.

The graphics are a mash-up of Tim Burton andÂ Georges MÃ©liÃ¨sâ€™Â aesthetics, which creates a pleasant Victorian-type atmosphere with Edward Gorey characters.Â In a game as deceptively simple as Don’t Starve, small visual moments have great impact. Your player-character prances around with surprising derring-do. Night takes on an eerie mood as you huddle around your fire, and if you wander too far from it, glassy eyes blink at you from the darkness. The creatures that populate the world are like something out of a bizarre childrenâ€™s bookâ€” elements of Phantom Tollbooth and Where the Wild Things Are, as translated by Ralph Steadman. Some of the player-characters stare at you withÂ Corpse Bride-like blank eyes.

As a side note, the soundtrack is available for $4.99 from the Steam Store, and itâ€™s well worth the purchase if youâ€™re a game music aficionado.

None, really, beyond that sheer frustration at constant death, though thatâ€™s pretty easily navigatedâ€” by not starving. 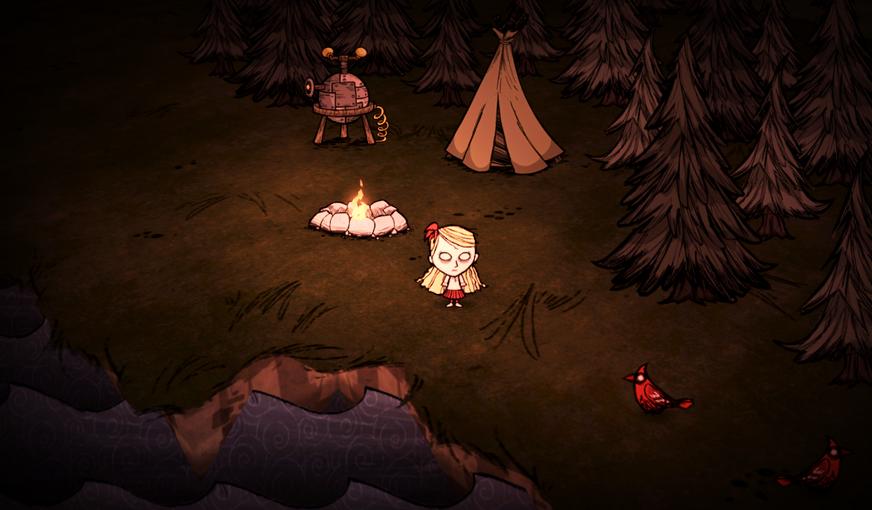 The kind of girl you want to take home to mom.

As mentioned above, multiple playthroughs are encouraged by the inclusion of additional characters. Klei is also constantly updating the game, which offers changes in the environment and, recently, the addition of a cave to explore. There’s also an opportunity to create mods or to benefit by mods created by the community, which presents new gameplay opportunities. 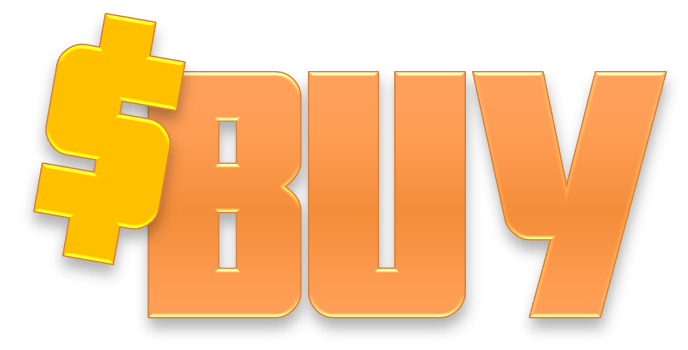 If youâ€™re a fan of clever, if sometimes grueling strategy games with unique characters, actions, and responsibilities, this is probably the game for you. Â The constant updates offer possibilities for new gameplay, and persistence is rewarded with the new characters. Thereâ€™s a lot of gameplay packed into what will feel at first like a little game– just be sure to give it the time it deserves. Â Don’t StarveÂ is often difficult, occasionally not fun, but always entertaining. Itâ€™s only available on Steam for right now (Mac and PC), but it was announced last month that itâ€™ll be available for PS4. Â

Former Staff Writer Alice is a novelist, Shakespearean actress, and gamer who once survived emergency surgery in Bangladesh, but still finds most video games more exciting. She still has recurring nightmares about Uninvited (from 1986) thanks to an early childhood playing games on an ancient Mac. She's played Mass Effect more times than most people should own up to and is eagerly awaiting her very own episode of Intervention, which will likely be the Best. Episode. Ever. She also occasionally speaks German, but only when it's most inappropriate.
You might also like
don't starvesimulationstrategy