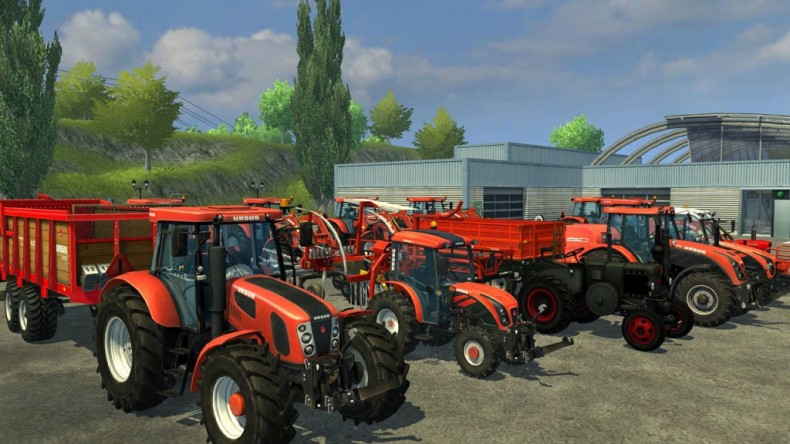 It's unimaginably boring; It's very ugly; Everything about it sucks

The nicest thing I can say about Farming Simulator is that it functions. So do hammers, garbage bags and alcohol, all three of which will come in handy should Farming Simulator ever come into your possession. I wouldn't wish it upon my worst enemy.

A certain amount of effort must got into simulation games for them to turn out the right way. The formula is tricky. Animal Crossing: New LeafÂ  nailed it, offering a home away from home that really did feel like exactly that. The reboot of Zoo Tycoon Â didn’t get everything right, but it made up for its flaws by at least being fun to play. Farming SimulatorÂ  gets everything wrong. It’s one of the most insufferable, boring games ever created. 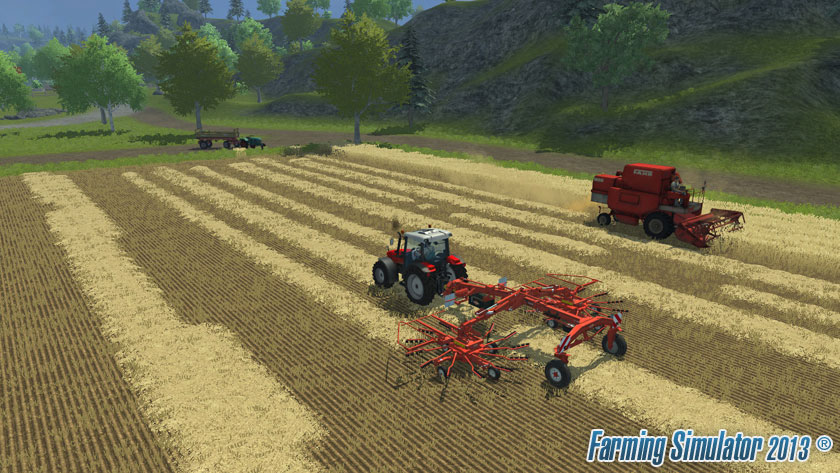 Where have you been all my life, Farming Simulator?Â  Finally, it’s a game where I can harvest grain while traveling at four miles per hour and then go dump it in a trailer, and then transport that trailer somewhere and dump the grain in a hole in the ground. But that’s not all! Then you get to do it again! Apparently this is what farming is really like (nope; I grew up on a farm). 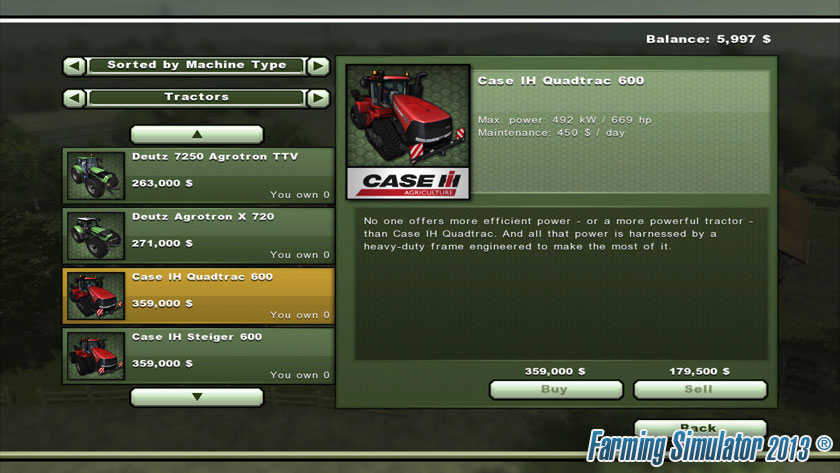 Most of your time in Farming SimulatorÂ  will be spent attaching a certain tool to a tractor and then driving it back and forth across fields. The majority of the game consists of doing exactly that. You’ll either be sowing, plowing or harvesting, but you’ll still just be driving back and forth. The only thing that changes is the tool you attach to the tractor.

The point of Farming SimulatorÂ  (and any other business simulation game) is to generate an income. You can do this by doing everything I just mentioned. You can also buy animals, such as cows and chickens, that produce goods which can be sold, or you can get paid for completing side missions, which are usually fetch quests. You’ll need to buy new vehicles and equipment if you wish to complete certain tasks.

You can also hire a staff to assist you with your crops. They’re expensive in the beginning. However, it is possible to become successful enough in Farming SimulatorÂ  where you can set your controller down and watch your staff do your job for you. The game truly does start to play itself after a certain point. That is a blessing that really should be available from the start. 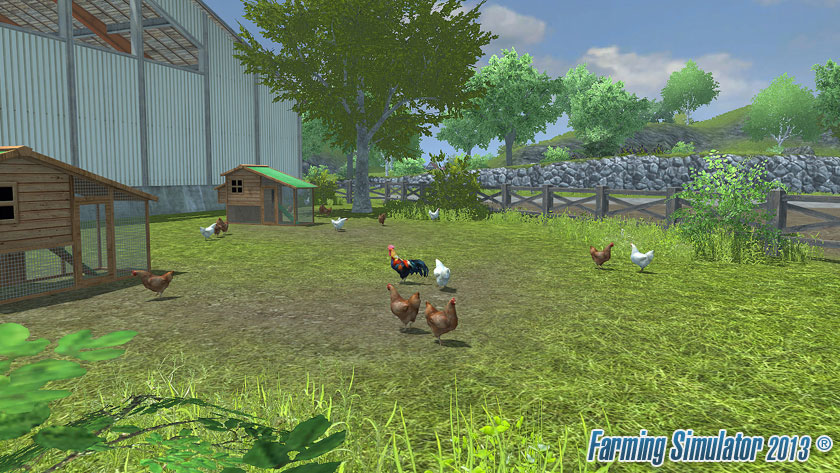 Giants Software sure does know how to pull a fast one on potential customers with screenshots. In motion Farming SimulatorÂ  is one of the ugliest console games ever. The houses in the game look like they’re made out of cardboard, and the trees look like they’re made out of paper. The character models look like were imported from GoldenEye 007Â  for N64. Their faces do not move at all and they don’t talk at all. When you’re driving a vehicle the steering wheel spins in your character’s hands, but their hands don’t budge an inch, and neither does the rest of their bodyâ€”ever.

Farming SimulatorÂ  is so hilariously incompetent on a technical level. No effort at all was put into the physics engine. Tractors are often launched into the air in the game because they were backed into a tool or hit a rock. Automobiles with inanimate drivers travel in circles on the color palettes that are supposed to be roads. Standing in front of one of the automobiles would lead one to believe they would stop or cause injuries, but no. They drive straight through you.Â  The framerate in Farming Simulator Â is solid, but that’s because it doesn’t require a framerate. It has all the visual flair of a rusty fishing hook. 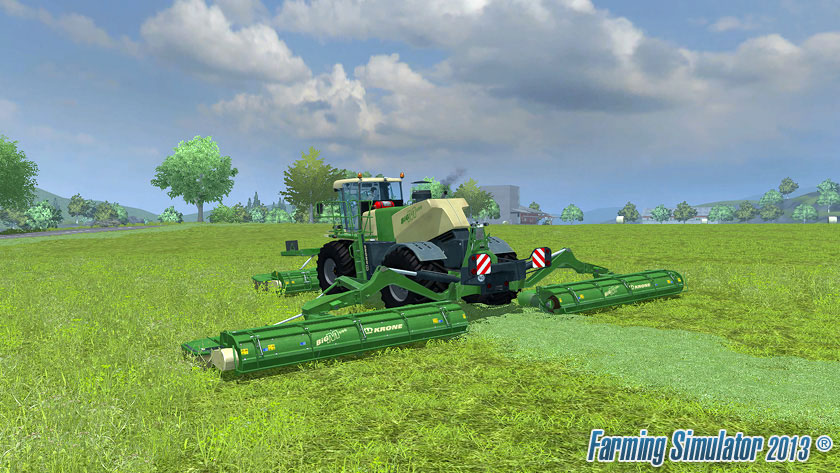 I don’t think I can really accurately describe just how boring Farming SimulatorÂ  really is. It gives Desert BusÂ  a run for its money. It could put a comatose patient into a a double coma. It’s…patheticallyÂ  dull. I wanted to stop playing it immediatelyÂ  after I started. The only reason there are so many Let’s Play videos of Farming Simulator Â floating around is because it’s the only way people can deal with their decision to purchase this turd.

Most of those videos are joke videos. That’s because Farming SimulatorÂ  is a joke. It’s so uncompromisingly steadfast in its quest to be “real” that it deserves to be laughed at. As a developer you’ve got a problem on your hands if plowing a field in your game is literally less fun than actually plowing a field.Â Trudging through this game with its stupid lack of any sort of fast travel is torture. I’m not a stickler for graphics, but looking at my surroundings in Farming Simulator Â somehow caused me to be even more depressed while playing it and made me hate it more.

I literally would shove my face in a pile of cow manure if it meant I didn’t have to spend another second withÂ Farming Simulator.Â  When developers choose not to put any effort into making a game enjoyable, I’m not going to put any effort into liking it. The nicest thing I can say aboutÂ Farming Simulator Â is that it functions. So do hammers, garbage bags and alcohol, all three of which will come in handy shouldÂ Farming Simulator Â ever come into your possession. I wouldn’t wish it upon my worst enemy. Everyone who claims to enjoy it is a liar or insane.

Features Editor Buddy was a journalism major at the University of Alabama. He now spends his days writing novels that will probably never get published and wishing he were an extra in an Anthony Hopkins film. He's been gaming since he can remember and has owned every console from the NES to the TurboGrafx-16 to, yes, even the Phillips CD-i. He loves all games, but his favorite genres are shooters and RPGs. His favorite game is The Legend of Zelda: Ocarina of Time.
You might also like
focus home interactive