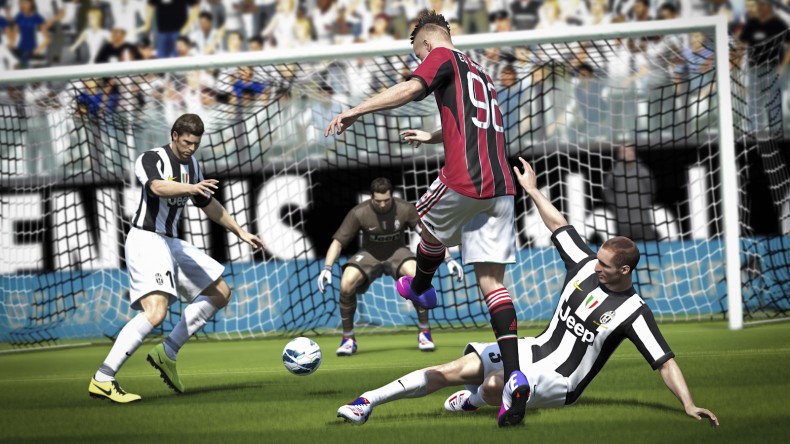 EA servers suck, the first touches can be annoying, graphics could be better.

It may be frustrating at first, but FIFA 14 will have you hooked in an instant. If you're a fan of Ultimate Team, you better pick this game up and quick.

The Best Yet, or the Same Old Story?

InÂ their last few FIFAÂ titles, EAÂ has hadÂ complaints from demanding consumers about too little changes in their yearly iterations, and with consumers wanting more every year, there have been a lot of unhappy FIFA fans, even though there have been some excellent gameplay additions recently. As more and more features have been added, there have been less innovative ideas to come up with for the ever-growing franchise. Some still hold the opinion that FIFA 13 wasn’t an improvement on FIFA 12, as little had changed, and the features that were added took a turn for the worse.Â However, I’m happy to say this isn’t the case with FIFA 14. FIFA 14 brings and improves on the best of both FIFA 12Â and 13,Â while addingÂ so much moreÂ to make it the best FIFA game thus far.

Like most sports games, there is no storyline in FIFA 14. However, it does have game modes which give you the ability to manage, create a team or become an up-and-coming star player. All these features are available in Career mode. In this game mode you can pick three options. The first is Manager, which as the title suggests lets you manage a team that you choose, from there you take control of transfers, the team, the scouting network and then play as your team in matches. You can start from the bottom and attempt to build an impressive team from nothing, or you can pick an already established team which will be easier to run. As a manager there are specific targets you have to meet, whether it be avoiding relegation or getting to the quarter finals in a cup tournament. Fail to meet these targets and you will most likely get sacked.

The second option lets you become a single player on a team. You can create your own player and use him, or you can choose a player which already exists such as Lionel Messi. As you play games with your player, your stats will improve if youâ€™re playing well. Play poorly and you may start each game on the bench until you can prove yourself to the manager. The third option is a combination of both options, where you are both a player and a manager. For this option you have to use your own player as Messi being the manager of Barcelona would be a bit farfetched.

Obviously, most gameplay mechanics from previous FIFA’s have stayed intact, but some have been changed dramatically. The first, and most annoying change is the “first touch” system. When a player is passed to, depending on their ability, where the ball is, and where the player is moving, it will impact your player’s first touch. This first touchÂ could result in the playerÂ moving the ball miles away you, your player may control the ball with ease, orÂ he could miss the ball entirely. At first, this mechanic seems random and rather confusing. Once you’ve played for a while, it will only be an irregular annoyance and you will learn how to avoid the annoying first touches.

Due to the touch system, pace seems less important in FIFA 14. Most other games were dominated by players with pace as they could easily out run any mediocre or slow runner. Although this means counter-attacking shouldn’t be as prevalent, it is. Hitting on the break is easier as players off the ball will make unique runs intoÂ space, letting you offload the ball, so you don’t have to attempt running with it.Â I’m not saying pace has no importance; it’s good for running into space, but not so much in a 1v1 situation. Strength is a necessity in most situations. In defense, stronger players will be able to stay with their faster counterparts as they will pull them back or make an early challenge as they will have the clear strength advantage.Â When attacking, strength is also key as it willÂ help your striker/center forwardÂ retain the ball as they won’t get tackled as easily as weaker players. The shooting system has also changed compared to previous FIFA titles. In FIFA 12 the finesse shots were ‘over-powered’, as most, if not all, of these shots went in if hit right. FIFA 14 however has a lovely combination where finesse shots and power shots should be used. Neither seem over-powered as of yet, and it seems as if it will stay that way. Goalkeepers also seem to be more intelligent in this game compared to its predecessors. Before, you could easily ’round’ the keeper (where you run around the keeper as he is coming towards your player), but IÂ have failed at this every time I’ve triedÂ it in FIFA 14. Not that that’s a bad thing, because it isn’t. It means goals are harder to score and require more skill.

Regarding the impact engine, I have had no troubles with it as of yet. That’s not to say there aren’t any problems. Each year since it’s been introduced, it seems as if the impact engine causes outrage. Although I’ve never foundÂ itÂ annoying, some people do. I find it rather entertaining watching a player attempting to get to his feet for ten seconds after falling over by doing an insane amount of spins mid-air, but then again that’s just me.

So far I have found the graphics in FIFA 14 to be rather peculiar. It seems as if sometimes I’ll be gazing into an actual football/soccer game and the next it seems as if I’m playing an arcade game. There seems to be no improvement compared to previous titles. Most players have distinguishable features, which they have in real life, which shows the amount of detail EA were attempting to achieve. The crowd bugs me quit a bit as even though most of the game looks real – the players, the stadium, even the ball, but not the crowd. I know it would be hard to make an entire 80,000+ stadium full of realistic fans, but it’s something that has bugged me for a very long time. It’s great that the ‘fans’ wear the jerseys of the teams playing, but every second or third person being the same just pesters me.

The sound on the other hand was great. Each pass, shot, save and more has a satisfying sound. Even the crowd has an immersive sound when your team is on the counterattack, or your opponents are. Added to this, the soundtrack is very solid, like most FIFA games. However, unlike other titles, FIFA 14 has many distinguished artists on the soundtrack. Usually, I only know one or two, if any at all but this year I’d say I knew over half of the groups on the soundtrack. This may sound like I’m complaining, but I’m not. Whether I know them or not, the soundtrack is amazing, as always.

The multiplayer in FIFA 14 is smooth, with hardly any lag at all. Usually at the beginning of the game, there is an unbearable lag, but not this time. You can play many of the game modes online, such as Ultimate Team, Pro Clubs, Online Friendlies and tons more. Being an online manic, this suits me perfectly as I love thrashing players in various game modes. It’s even more satisfying when they’re your friends, and no matter the outcome, you’ll have an enjoyable time. 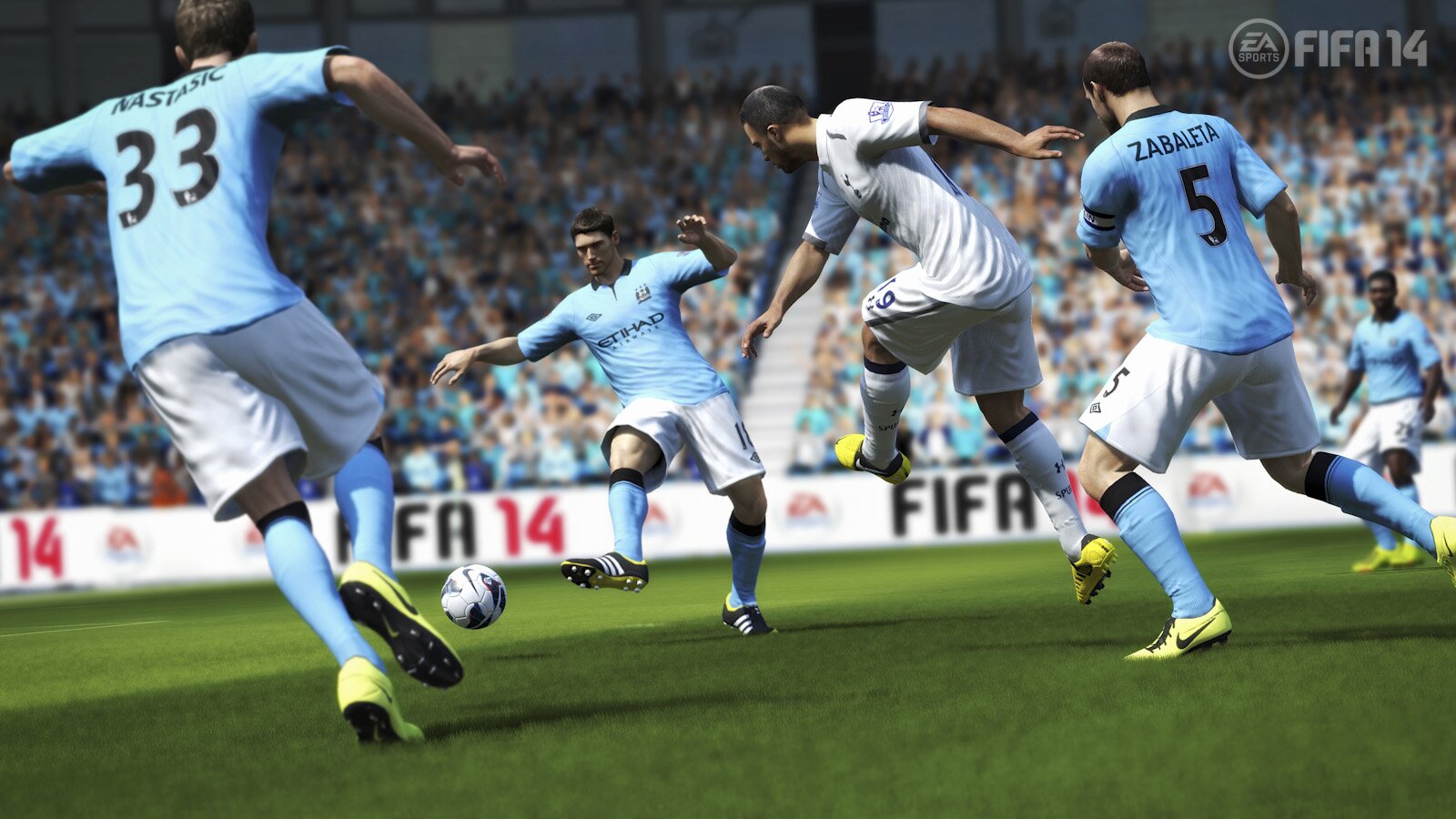 I have had barely any problems. Nuisances include: nearly every throw-inÂ being a quick throw-in, the EA servers constantly acting up (which is understandable on the launch weekend), the crowd graphics and the occasional glitch. Yet, none of these are game-breaking and didn’t hinder my experience.

Oh Ultimate Team, how I love thee. Ultimate Team or FUT (FIFA Ultimate Team) has grown into the biggest selling point of FIFA, and it’s obvious why. Making your own team, making money and spending it on players, managers, contracts and much more makes this game mode incredibly addictive. In FUT, you assemble any team you want. Players from the same league, or country will have good chemistry,Â meaning random players in a team won’t work well.Â Each player has a card which you can buy. Depending on how good they are, they may be expensive or inexpensive. As you play matches you’ll get coins and slowly you’ll get the money to make the team of your dreams. It will definitelyÂ keep you playing until the nextÂ FIFA is out.Â FUT this year is incredible, as there is so much to do online and offline. I would go on, but I could talk about FUT forever. On the Xbox version it’s also worth noting that Classic kits and players are acquirable on FUT, but for PlayStation users… well… unlucky. If you’re a football/soccer fan, this is a must buy.

It may be frustrating at first, but FIFA 14 will have you hooked in an instant. If you’re a fan of Ultimate Team, you better pick this game up quick.

Former Staff Writer Mark is an Irish student passionate about games. He enjoys playing sports such as soccer and rugby, but loves playing video games at any time possible. Mark plays mostly on the Xbox 360, but also plays on the PC from time to time. He is a multiplayer manic and also loves to delve into deep storylines within RPGs.
You might also like
EAFIFA 14review