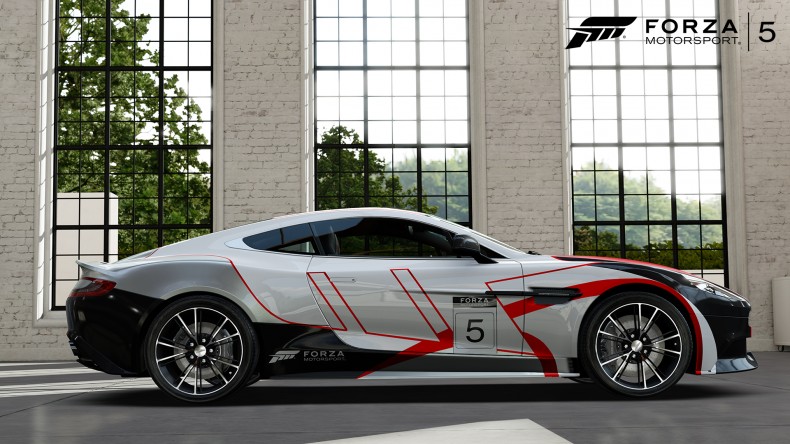 Gorgeous cars, challenging but rewarding gameplay, introduction of the drivatar to the series, commentary from Top Gear hosts

Forza 5 isnâ€™t for everyone. Itâ€™s challenging and requires a lot of race restarts to really master a course. But, once you get the hang of it, youâ€™re hooked. Forza Motorsport 5 is not only a fun game, but is also beautiful and visually stunning, which is perfect for breaking in your new Xbox One. Highly recommended.

Forza Motorsport 5, the Xbox One exclusive, was never on my radar in terms of games I wanted to play. Itâ€™s not that I donâ€™t like racing games; I just prefer crazy and unrealistic games like Burnout and Need for Speed over the closed track simulators. However, after ten minutes of playing Forza 5, I was hopelessly hooked, forever changing my thoughts on racing games. The beautiful, glistening cars paired with the challenging gameplay made the fifth iteration of the Forza hard to put down.

Forzaâ€™s career mode is made up of 8 leagues. In each league, there are up to 7 different championship series that pertain to that category. For example, in the Exotic league, there are 3 different championships: Ultimate Grand Touring, Modern Hyper Car, and Timeless Super Car. Each championship provides a list of cars for you to choose from, purchase, and then race in the 8 events of that series. While the basic concept of Forza is very simple, I find myself still as engaged 30 hours in as I was when I first started. As a Forza novice, I worried about how realistic and challenging it would be. However, Turn 10 provides plenty of options to help ease in new players. These include guiding lines to help with car placement on the track, and automatic braking if the player is going too fast into a turn. As a player gets better, they can turn off these assists for a greater challenge and a greater race payout. When I first started playing, I had all the assists on and then slowly weaned myself off. While it was hard to take that next step, itâ€™s beyond satisfying once I started to get the hang of things.

Iâ€™ve heard a lot of complaints from other sites about there being fewer cars in Forza 5 than its predecessor, and while that is true, 218 beautiful cars is still nothing to frown on. Each car is carefully crafted to give you the most authentic experience, both under the hood and in the driverâ€™s seat. Each car is unique, with its own engine sounds, design, interior, and stats – the latter being broken into 5 categories: speed, handling, acceleration, launch, and breaking. Cars can also be personalized with new paint jobs after you purchase them, using either popular designs made by other Forza players or your own creativity in the design studio. For example, I have a R2-D2 painted Audi TT and yes: itâ€™s as awesome as it sounds. Once you get out of the garage and on the road, you will find yourself competing on 14 different tracks based all around the world. From the famous brickyard in Indianapolis, to the cobblestone streets of Prague, each track is brilliantly modeled after their real life counterparts and further immerses the player into the world that is Forza 5. Thatâ€™s not to say that the 14 track playlist doesnâ€™t start to get old pretty quick, even with different circuits on those tracks. The short playlist is made up for, in my opinion, by the leaderboard that is displayed after every race showing your world ranking. I am constantly trying to get best times for each circuit and pull ahead of my friends, which in turn forces me to learn and replay tracks so I can race it correctly.

Speaking of friends, Forza 5 introduces the drivatar for the first time in the series and it might be the coolest feature of the game. As you race, your drivatar learns from your performances, like when you start breaking for turns, and when you make your push to pass people. When you turn off the game, your drivatar keeps playing for you in the cloud, driving exactly like you, and earning credits in your absence. Cooler still is the fact that you donâ€™t race against any computer A.I. in career mode, just drivatars of other players and friends. You can also see a notable difference in the drivatars: my friend Brad is very precise in his driving and I find him lurking in the top 5 every race, whereas Karam (the founder of SpawnFirst) is more aggressive and harder to pass on turns. Both of their drivatars reflect these styles perfectly, so itâ€™s really like youâ€™re racing your friends every time you turn on the game even though itâ€™s just a mirrored version of them. That fact alone will keep me coming back time and time again. Like most racing games, a LOT of detail goes into the cars, and Forza 5 is no exception. Whether you’re in the garage or out on the track, every car looks stunning. That being said, when you focus too much on one thing, others tend to suffer, which is what happened to the environment around the track. While the stadiums and crowds look decent enough, the trees and bushes don’t look remotely real, even as you’re blowing past them at 130 mph. I also noticed that the dirt you kick up when your car goes off the course comes up in just circular puffs and looks horribly unnatural. However, despite all that, Forza 5 is still a very good looking game.

The sound department did a terrific job all around. The engines sound amazing and the roar of the crowd is exhilarating. Car descriptions voiced Top Gear hosts Jeremy Clarkson, Richard Hammond, and James May are both passionate and alluring for both car enthusiasts and first time racers alike. Forza also totes a bunch of epic scores for both in-game and on the menus. So epic in fact that my girlfriend asked me what movie I was watching when I first loaded the game. However, while these scores were very awesome, they got repetitive very quickly, so much so that I ended up turning off the in-game music and just listened to my own Spotify playlist. Forzaâ€™s multiplayer features several different modes, including monthly challenges, class races, and series races. The races uses a smart match system to ensure that you don’t get paired with anyone outside of your skill level, ensuring your race is always be close and exciting. Players can also create a private lobby for races with friends, as well as playing split screen locally. Having played online with friends before, I can say itâ€™s a lot of fun, especially when thereâ€™s a LOT of smack talking involved. (Editor’s note: in my case, it backfired)

As far as technical issues go, I am yet to find one in Forza 5. Going beyond that, I wish more detail had gone into the scenery around the tracks and that there were one or 2 more tracks to play on.

Forza 5 isnâ€™t for everyone. Itâ€™s challenging and requires a lot of race restarts to really master a course. But, once you get the hang of it, youâ€™re hooked. Forza Motorsport 5 is not only a fun game, but is also beautiful and visually stunning, which is perfect for breaking in your new Xbox One. Highly recommended.

Reviews, Xbox One
Forza 5xbox one

SpawnCast Co-Host/Creative Co-Director Brian is member of the University of Mary Washingtonâ€™s class of 2012 and graduated with a BS in Computer Science. He has been gaming since the first day he held an original GameBoy in his hands and hasnâ€™t stopped since. He now plays mostly shooters and RPGs on his Xbox 360 but will occasionally work in some sports or fighting games when heâ€™s in the mood. He is also a huge fan of playing marathon sessions of Legend of Zelda when the opportunity arises.
You might also like
Forza 5xbox one