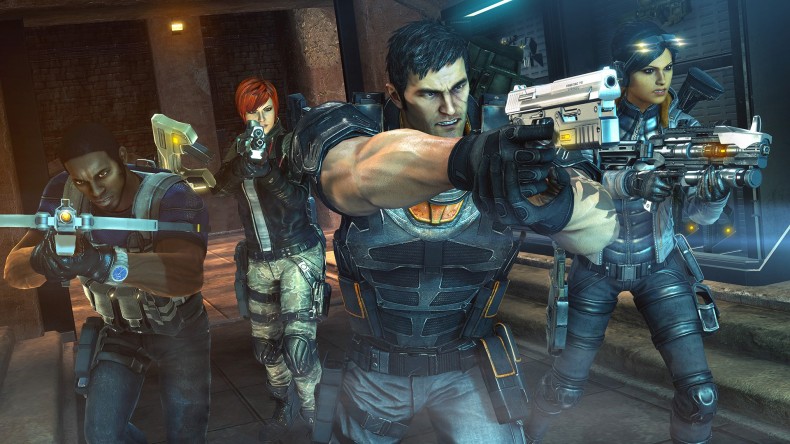 Characters have decent personalities, premise is a decent idea, good graphics and art direction, can play a multiplayer game by yourself

Fuse has some solid ideas and gets the basics down, but the overall gameplay and story is generic and boring. The entire game can be described as moving from one shooting gallery to another; there is absolutely no variety in the gameplay. Couple this with the frustration caused by increasingly bad A.I. and no reason for a second playthrough, and you got a game that isnâ€™t even worth a rental. Fuse isnâ€™t a terrible game, itâ€™s just very mediocre.

A Fusion of Action, RPG, and Boredom

After years of Playstation exclusives, Insomniac Games is back with not only a new IP, but the first game in their line-up to be on both the Playstation 3 and the Xbox 360.Â  This game was the perfect opportunity for the developer to spread its wings and get the create juices flowing, especially since the developer has been working solely on two different franchises, but instead falls short of expectations. Fuse is the story of four secret agents, known as the group Overstrike 9, who are sent to a top secret laboratory under attack from the private military corporation Raven.Â  The group consists of Dalton, the leader and former Raven mercenary, Naya, who has ties to Raven through her father, Jacob, an ex-cop, and Izzy, a young scientist.

Early into the first level, the characters find the reason behind the attack, an alien substance called Fuse that bonds to any element usually with devastating results.Â  The purpose of the research on fuse was to create powerful weapons from the alien substance which Raven plans to take and sell it to the highest bidder regardless of the consequences.It doesnâ€™t take long before another, more powerful group comes into play and overthrows Raven while initiating their scheme with fuse.Â  To be fair, the new group is more compelling than Raven and their plot is less cartoony, but Fuse is hardly a story focused game.Â  In regards to the plot, only two of the four characters are significant to the plot and the antagonists while the other two are just along for the ride.Â  The characters are fairly interesting and are colorful in their own way; they also have some decent banter in between firefights.Â  This is the only area where the story shows any charm since the rest of the game is either trying to be too serious and gritty or trying to justify the plot points.Â  Itâ€™s obvious the story was an afterthought because the idea behind the fuse substance wasnâ€™t for a strong plot point, but for a central gameplay mechanic.

The core gameplay feature is introduced when all four characters receive a different fuse weapon.Â  Dalton gets a wide and powerful riot shield which can throw back any bullets or grenades at the enemy while shielding teammates.Â  Players controlling Dalton will be used mostly for support since other players can shoot enemies through his shield.Â  He can also place smaller shields on the group to be used a cover.

Naya can temporarily cloak to get an advantage over the enemy and help with areas where stealth is an option.Â  Her weapon is an assault rifle that creates singularities on whatever it hits.Â  The other female character, Izzy, has a similar weapon except it crystallizes enemies, but also has the ability to heal downed characters from afar making her the most balanced character in the game.

Jacob is the most combat focused character in the game; he carries a powerful crossbow and serves as the gameâ€™s sniper.Â  Jacobâ€™s sole purpose in the game is to eliminate any enemy in the area or deal the most damage to the stronger enemies.Â  He is also good for creating chain effects from Izzy and Nayaâ€™s attacks.

Every one of the groupâ€™s powers and weapons can be combined to create devastating effects which can clear out an entire room with some decent planning and coordination.Â  Having Naya peg a few enemies with the singularity rifle then hitting one with Jacobs crossbow can chain together singularities and quickly dispell each enemy almost instantly.Â  Unfortunately this can only be achieved consistently while playing with a group of people because the A.I. is less than useful.

At the start of the game, it looks like Insomniac did a good job with the friendly A.I.; when I was downed, Dalton would shield the character reviving me and another time, they set up for a coordinated stealth attack.Â  Sadly, the A.I. degrades as the player progresses through the story and ultimately becomes cumbersome on the final stage because they refuse to take cover or even fight back. There is a way to get around the A.I. problems outside of playing online though.Â  Unlike most squad-based multiplayer games, Fuse allows players to switch between characters on the fly.Â  This can help alleviate the pain of carrying the entire team on your shoulders and gives players a chance to experience every characterâ€™s abilities, but it takes some skill and strategy to micromanage an entire team that should have been able to do the basics on their own.

The majority of the combat is focused around an overused gameplay feature, cover-based shooting.Â  It is realistic and strategically sound for a person to take cover in a firefight, but it takes the focus off of the gameâ€™s only unique mechanic, the fuse weapons and powers.Â  Considering how durable every enemy in the game is, one would figure that using all of the charactersâ€™ powers to efficiently defeat the enemies would take priority instead of the most basic third-person shooting mechanics.

In games like the Mass Effect series, players had to take cover but also had to use each of the characters abilities strategically to come out on top of every fight, especially on the harder difficulties.Â  Granted, there were a few areas in Mass Effect where players could stay in the same cover and be ok, but in Fuse, that strategy works most of the time.

It is also baffling that the focus of the gameâ€™s combat, the fuse weapons, can be depleted quickly and ammunition in the environment is scarce.Â  This leaves players with the option of picking one of the very few ordinary weapon types dropped by most of the enemies.Â  These weapons are extremely weak and do little to the enemiesâ€™ large health bars.

Stealth and platforming have also found their way into fuse, though; they arenâ€™t done particularly well and are barely worth mentioning.Â  The stealth revolves around crouching and walking up to an unaware enemy and pressing a button which makes a character loudly kill an enemy without alerting the others.Â  It is also worth noting that completing a segment undetected is almost impossible without player controlled characters.Â  Platforming is also barely worth mentioning because characters climb around precarious portions of the environment without any risk of dying and serves only as filler before getting to the next firefight.

Like Mass Effect, Fuse is a shooter with RPG elements; though, most of the abilities unlocked are hardly useful.Â  Every enemy taken down or hidden log gives the player a small amount of experience to be used to unlock various abilities.Â  The only useful unlocks are the primary fuse powers while the rest donâ€™t have much use and donâ€™t evolve the gameplay at all. On the bright side, the graphics and sound design are well done with detailed characters that are played by talented and well-known voice actors.Â  Like I said earlier, the charactersâ€™ personalities are the only good part of the story and most of the credit for that goes to the voice actors.Â  The art direction is also good and gets points for using color instead of various browns and grays like most shooters.

There is one supplemental game mode to help pad out the gameâ€™s shelf life and that mode is Echelon.Â  This mode is an almost mandatory Horde-style mode where the player or players must hold out against increasingly difficult waves of enemies on different maps.Â  Echelon is nothing new and nothing exciting, which is what Fuse desperately needs.

Despite some good ideas and solid gameplay mechanics, Fuse still manages to be boring due to lazy copy-and-paste design.Â  Nothing new is thrown at the player, just more and more regular enemies in generic levels.Â  Also, going alone may be the worst route since the friendly A.I. is stupid and useless even against the equally stupid enemy A.I. Fuse has some solid ideas and gets the basics down, but the overall gameplay and story is generic and boring.Â  The entire game can be described as moving from one shooting gallery to another; there is absolutely no variety in the gameplay.Â  Couple this with the frustration caused by increasingly bad A.I. and no reason for a second playthrough, and you got a game that isnâ€™t even worth a rental.Â  Fuse isnâ€™t a terrible game, itâ€™s just very mediocre.Â  Considering Insomniac has created the Ratchet and Clank series and the Resistance series, one would figure that Fuse would have some charm or creativity.Â  If this is the best Insomniac can do after leaving Sony, then the company is in serious trouble.

Former Contributor Chris West is a graduate of Texas Tech University where he earned his BS in Electronic Media in Communications. Chris has been passionate about games since he was a kid and today prefers games with a strong narrative. He also has a soft spot for horror games, legitimately scary games mind you, and any game claiming to be challenging, Dark Souls for example. When he isn't playing games, he is pursuing his other passions: music and photography. Chris can play both guitar and bass and then take high quality pictures of the performance with his camera. In the end, Chris enjoys writing about his passions and ideas, when he isn't destroying his friends in Call of Duty.
You might also like
EAElectronic ArtsFuse