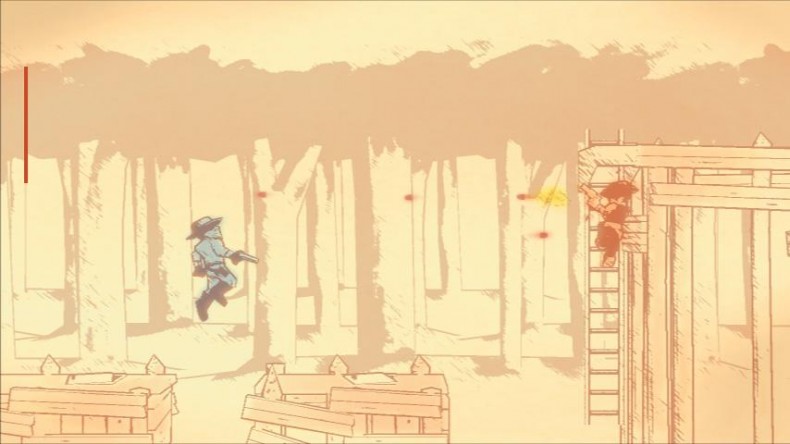 The shoot-'em-up side-scroller gameplay is fun as hell; The art style is amazing; The soundtrack is worth turning up

It's short; Some deaths feel unfair

Gunman Clive doesn't last long, but what's there is great. At $1.99 it's a steal. Any 3DS owner would be foolish not to purchase it immediately.

The 3DS eShop is the place to go to experience some inexpensive old school fun. However, the games offered that aren’t from the NES/SNES library are usually hideously awful games with such names as Dress to Play: Cute Witches!Â or Deer Hunting King.Â What a joy, then, to discover a game likeÂ Gunman Clive.Â I went in expecting a cheap flash type game. I wound up being pleasantly surprised.

Gunman CliveÂ doesn’t feature much of a story. Players control a man, Clive, or a woman, Ms. Johnson, in an attempt to save the opposite character. It’s the oldest setup in video game history, which works just fine becauseÂ Gunman CliveÂ is indeed an homage to that very history. Nothing wrong with that.

As I mentioned above,Â Gunman CliveÂ is a tribute to the games of yesteryear. It’s an 8-bit side-scroller shoot-’em-up that never pretends to be anything more. I smiled throughout its challenging structure in which death means restarting a level from the very beginning every time.Â Gunman CliveÂ does away with those pesky checkpoints that so many people complain about nowadays, not that it needs them. Nearly every level takes less than a minute to complete.

Enemies are easy to defeat, taking between one to three shots before they go down. The challenge is figuring out where in the level foes are going to be. Some hang out windows, some charge across the screen on horses and some pop out of hatches in the ground.Â Gunman CliveÂ is all about reflexes; fire quickly or watch as your health bar is rapidly whittled down. Boss battles are especially difficult, requiring players to hone their memorization skills or suffer the sting of loss time and time again.

The levels themselves are also an enemy. Things start off easy enough with a few holes or environmental hazards to jump over or dodge, but later levels up the ante with spinning and even vanishing platforms and wider gaps. One slip-up can mean a level restart. I found immense satisfaction in conqueringÂ Gunman Clive.Â I didn’t stop playing until I had completed it.

The art style inÂ Gunman CliveÂ is pretty amazing. It’s like playing through a child’s interpretation of what the Wild West was like, and it’s really something else. Sepia-toned sketchbook visuals are a rarity in video games. I for one could go for more of them.Â Gunman CliveÂ offers a treat for the eyes.

The soundtrack is good. The music is inventive and ridiculous fun. Some it sounds like re-appropriations of classic Capcom themes, At other times it’s more quiet, opting for a peaceful tone. It might seem like a strange fit, but it’s actually not. It’s nice to get a break sometimes from the often nerve-grating orchestral music prevalent in so many other games. While I’ve only had good things to say about it thus far,Â GunmanÂ CliveÂ is not perfect. Like several other downloadable games, it’s really short. It takes just over an hour to complete. It only costs $2, but it’s still short. Also, some deaths can cross over from the realm of “challenging” into “unfair”. How was I supposed to know that platform was going to spin when none of the other ones before it had?Â None of these issues should keep anyone from playing it, though.

Gunman CliveÂ doesn’t last long, but what’s there is great. I got all nostalgic whilst playing it and felt like breaking out my NES afterwards just for the hell of it. At $1.99 it’s aÂ steal. Any 3DS owner would be foolish not to purchase it immediately. I’m happy I discovered it.

Features Editor Buddy was a journalism major at the University of Alabama. He now spends his days writing novels that will probably never get published and wishing he were an extra in an Anthony Hopkins film. He's been gaming since he can remember and has owned every console from the NES to the TurboGrafx-16 to, yes, even the Phillips CD-i. He loves all games, but his favorite genres are shooters and RPGs. His favorite game is The Legend of Zelda: Ocarina of Time.
You might also like
Bertil HorbergBuyeShop