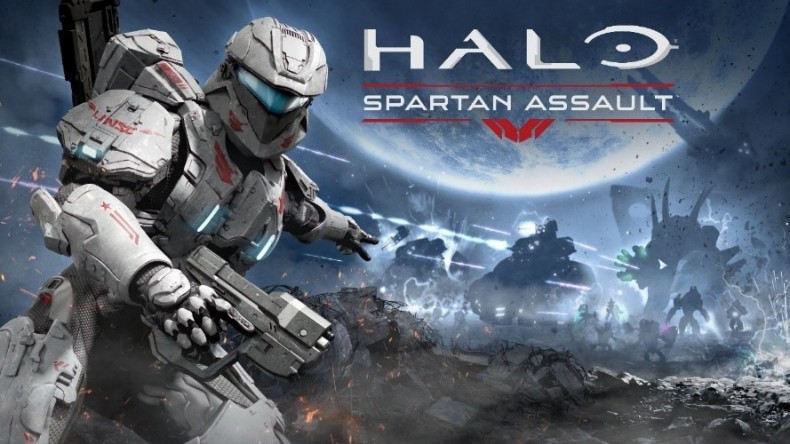 Quality graphics and sound for a game that's an app, Great addition to the Halo Universe, Attention to detail in how the game is played and presented, Intuitive controls

Even if you're not a huge fan of the Halo universe, this is an app to take a look at. It will satisfy your need for hardcore games on your mobile device and is perfect for on-the-go gamers.

Iâ€™ll admit that I had some reservations about this game when it was announced.Â  Iâ€™m a huge fan of the Halo universe and to go from a first-person shooter on a console to a mobile platform seemed like a jump that could not be done well.Â  However, now that I’ve played it, I can humbly admit that I was wrong and that the developers did incredibly well in their translation of the Halo universe from console to mobile.

Halo: Spartan Assault takes place between Halo 3 and Halo 4.Â  You play as Spartan Edward Davis and Spartan Sarah Palmer, re-living the battle of Draetheus V against a splinter cell of the Covenant that ignored the ceasefire from Halo 3.Â  You fight off forces on the moon and on the planet as Davis and Palmer respectively.Â  Wondering why the covenant would bother with the moon, you discover that the moon is actually ancient forerunner technology that can disassemble planets.Â  Through 5 operations with 5 missions each, your objective is to stop the invasion, stop the acquisition of the Death Star forerunner tech, and survive. The game is a top-down third person shooter and as such does not skimp on the details. For the hardware thatâ€™s in a phone, Halo: Spartan Assault looks damn good. Needles from a Needler have a soft glow, a charged plasma pistol has electrical field effects, and shields flicker on when taking fire. There is incredible attention to detail and this even holds true for the cut scenes. The geography of the levels and the flora that accent the landscape really help bring to life the never before seen planet of Draetheus V.

Along with the details and scenery comes some strong audio backup. Youâ€™ll hear Elites barking orders, grunts squealing, and the powerful sound of a sniper rifle firing a round. The voice acting is also something to note.Â  As a recount is told of the events, it sounds more like a briefing than a story. The audio and visual aspects really help to bring this mobile platform to life so that it stand out above the rest.

Halo: Spartan Assault dropped a lot of console gameplay mechanics to make it mobile-friendly.Â  You donâ€™t have to reload, zoom down sights, or jump around to avoid being shot.Â  Your left thumb controls direction of movement and your right thumb controls the direction youâ€™re shooting.Â  Aim assist is present for lobbing grenades, firing vehicle weapons and precision based weapons like sniper rifle.Â  Thereâ€™s also one â€˜buttonâ€™ on the screen for melee, pick up weapon, and enter/exit vehicle. To access your armor ability you click on your character and to throw a grenade you double tap anywhere on the screen.Â  If you want to switch between weapons and grenades you simply tap on the HUD icons to cycle through your options. These control designs work incredibly well to bring as many aspects of Halo to the mobile platform. Halo: Spartan Assault not only kept in mind the limitations of the mobile platform, but the fact that the platform is indeed mobile. The game is fairly short and simple; nothing is too complex or demanding that you canâ€™t sit on a train or bus, open up the game, and play a level or two before you get to your stop. This is the essence of mobile games, short, sweet, and to pass some time.

I’ve been singing praises of the game so far, but unfortunately itâ€™s time for a combo-breaker. Â A limitation of touchscreens: there is nothing stopping your thumb. You donâ€™t feel a button, you donâ€™t feel a thumb stick and when youâ€™re playing, you donâ€™t feel your thumb slowly wandering off the screen and onto the home button. Youâ€™ll freak out when the game closes and you see your home screen wondering, â€œwhat just happened!?â€Â  But as you play, youâ€™ll learn to be more conscious of your thumbs wandering ways. So when that home screen comes up again it can only mean one thing: the game crashed. I’ve had the game crash on me a total of five times, pretty much once per Operation. Thatâ€™s not including the game overheating my phone to the point that it shut off. Halo: Spartan Assault is a taxing game on your phoneâ€™s hardware. I found that I could only play for about 10-15 minutes until the frame rate noticeably slowed down and

I knew that my phone was straining and shut down was imminent. At that point I would pause the game, go to my home screen, and let me phone cool down.Â  Iâ€™m sure this doesn’t happen for those who purchase it for their Windows 8 computers, however this game was designed with the mobile platform in mind and if itâ€™s overheating phones to the point of forced shut-downs then someone overlooked something.

Finally the micro-transactions. You can enjoy the game without them, but the fact that theyâ€™re there is annoying. As you play the game you get XP (experience points) which you can exchange for better armor abilities or weapons. But some of the really good stuff cos

ts XP and CR (credits) which you have to purchase. The options range from 500 credits for $3.99 to 10,000 credits for $39.99 (why is that an option?). You can get access to those by also completing Halo 4 achievements, but for some missions the goods will be locked unless you have purchased credits.

Go out and buy it!Â  Itâ€™s only $6.99 and is a decent addition to the Halo universe. If you still need some convincing then check out Halo: Spartan Assault Lite; thatâ€™s the free version that was recently released and essentially acts as a demo. It has some pitfalls, but none that should keep you from fully enjoying this game if you have a Windows Phone 8 or Windows 8 computer.

Versus Mode Co-Host/Creative Co-Director Chris is ridiculous. True story: instead of paying rent one month he bought a Nintendo 3DS. Being a fan of all gaming platforms is tough on his wallet, but he's a gamer on a budget. He plays his PS Vita or 3DS while on the train to/from work and his Xbox 360 or Wii U when at home. He won his university's Video Game Olympics competition back in April of 2012 and mentions it whenever he can in conversation. His other interests include comedy, surviving Chicago, and hangin' out with his pup, Theta.
You might also like
haloMicrosoftMicrosoft Studios

New Project Line for Halo in the Works