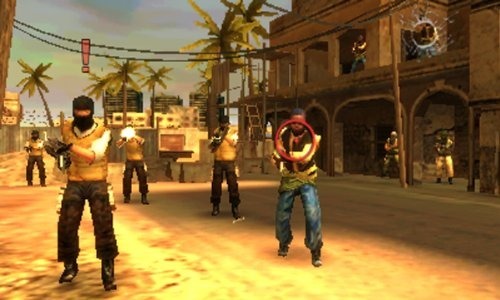 It's really damn boring; The AI is crap; The story makes what Call of Duty has to offer seem masterful; The controls are awful; The point system is useless; It's ugly; The sound design is an embarrassment to the video game industry

Heavy Fire: The Chosen Few made me yearn for something more the entire time I was playing it. It can't even manage to deliver the cheapest of thrills. It just sits there, slowly decomposing.

On-rails shooters are a dying breed. No real explanation exists as to why that is so. It’s not like they’re bad or outdated; they just don’t sell well.Â The House of the Dead: OverkillÂ andÂ Sin & Punishment: Star SuccessorÂ are both very solid games. They are not at all likeÂ Heavy Fire: The Chosen Few. I wish I had played through either of them again instead of playing it.

There’s a guy to the left of that shed in the background. Can’t see him? Welcome to Heavy Fire: The Chosen Few for the 3DS!

The main character inÂ Heavy FireÂ is a soldier named Will. He’s hunting for ENEMY INTEL!!!!!! He shoots bad guys in the foot and they die. He sometimes accidentally shoots good guys, but he’s not supposed to do that. They get in the way, though. What I’m basically getting at here is that the story inÂ Heavy FireÂ is f@#$ing stupid. 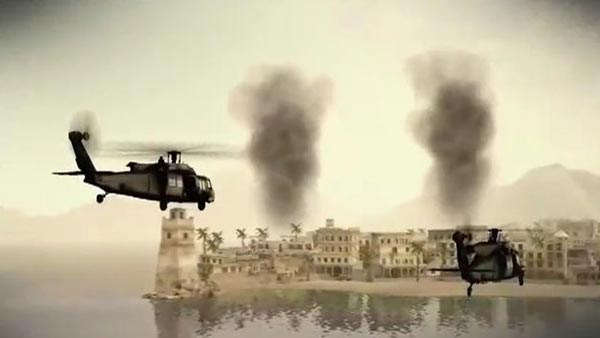 “There’s a fire! I don’t know where because none of those buildings are burning and that smoke is not connected to anything!”

Backgrounds float by as enemy AI that aims worse than the characters onÂ Breaking BadÂ shambles onscreen only to be taken down mere seconds later.Â Heavy FireÂ is one of the least challenging games I’ve ever played, topped only by perhapsÂ Elmo’s Number Journey. The only time I ever had to restart a mission (no checkpoints here) is when I was taken down by an enemy I couldn’t see. It’s difficult to tell what’s going on on the tiny 3DS screen at times, which is what happens when a game that’s meant for consoles is lazily flung like orangutan shit onto a handheld device. The thing is, the console versions are terrible also.

Heavy FireÂ is already overly incompetent and boring without the assistance of its inane control scheme. I mean seriously, who designed this? Who ever thought it would be a good idea to require players to aim using the touchscreen on the 3DS? That’s right, the giant red aiming reticle is controlled via swiping a stylus across a screen. Weapons are fired using either the right or left trigger. The 3DS is not a damn iPad and I don’t particularly enjoy making my hands involuntarily play Twister. It’s an awful way of playing a game that kept my tolerance level low and my wrists hurting.

Heavy FireÂ also features a completely useless point system. It’s in place in case someone wants to try and top their own high score, which no one will want to do. The game also rewards the player with money after every mission. The money can be used to purchase, upgrade or repair weapons. Buying a better gun just means that the game becomes even easier, so I don’t know why anyone would bother.

Heavy FireÂ is ugly. It has little-to-no technical issues working against it, but that’s because it’s just plain hideous. The word “technical” can be applied to nothing in this game. The visuals were pretty much imported straight from the 90’s, complete with character models with no discernible facial features. The cutscenes are hilariously dumb and look as if they were created in MS Paint. The same song plays on repeat throughout literally the entire game. No voice acting exists inÂ Heavy FireÂ aside from a disembodied voice occasionally yelling “GET DOWN!” or the enemies making the same grunting noises every time they die. Prepare to be dazzled by the amazing cutscenes.

Heavy FireÂ is the type of game that a person who is looking for something different buys without realizing what it is. Then that personÂ can invite a friend over and dare them to try it. The friend will play it for three minutes before punching the other person in the throat. It’s such an unbearably boring ordeal that mentioning any of its other problems feels like nitpicking. The complete lack of anything remotely interesting is like a black hole that sucked the entire game into it before regurgitating a mass of curdled milk that hardened into cartridge-shaped squares, which the publisher then decided to package and ship. Heavy Fire: The Chosen FewÂ made me yearn for something more the entire time I was playing it. It couldn’t even manage to deliver the cheapest of thrills. It just sits there, slowly decomposing. Once the acoustically unrealistic gunfire and pixelated smoke have died down, nothing is left except the sound of crickets. And the crickets are dead.