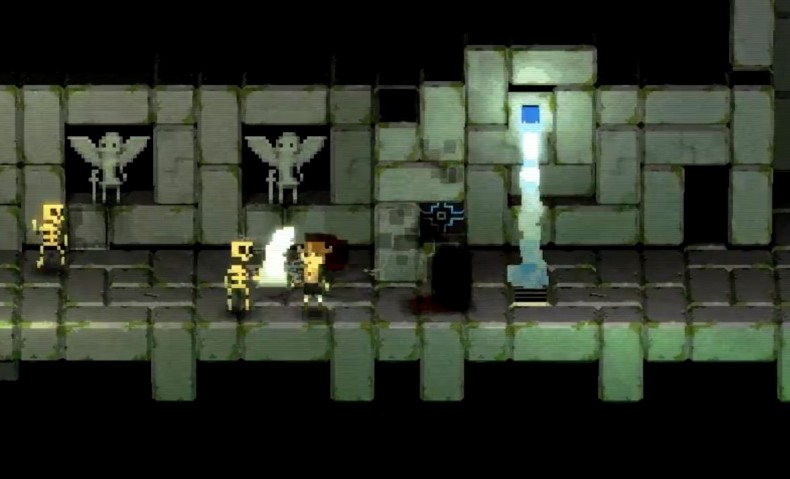 Good gameplay, Sound and graphics are awesome, particularly the graphics, good take on a wistful genre

Local multiplayer might be reminiscent of the golden age of games, but it's impractical in today's market, combat's not particularly addictive, I was really more scared of losing my stuff than the enemies themselves.

It's new, but it's old. Legend of Dungeon brings a lot of good things to the table and it should be heavily considered for a purchase. It's sensibly priced and you will get a lot of gloriously fun playtime from it. Robot <3's Kitty did a great job and Legend of Dungeon should be appreciated by the masses.

Iâ€™ll be honest, Legend of Dungeon wasnâ€™t even on my radar until about a week ago. Since then, Iâ€™ve played and loved it as if Iâ€™d been anticipating it for ages. Built in one of the most unconventional, yet awesome environments Iâ€™ve ever heard of (in a treehouse?!), Legend of Dungeon is a home-grown, vintage-style dungeon scroller. The developers, a husband and wife team who own â€œRobot <3 Kittyâ€, literally gave this game their all, and it really, really shows.

The game doesn’t really have a story as such, but is set in a procedurally generated dungeon and has a very clear-cut concept that has already proven itself popular amongst the masses. Your character starts in a tavern with some odd lookinâ€™ fellars, Gimli (of LotR fame) is in attendance along with a certain â€œSultan of Coffeeâ€. There are some bathrooms located in the back of said tavern which shall aid in the mighty quest of changing your clothes. Once you get out the tavern, shit gets real – fast. You should get through the first few levels easily enough, after level 5 it starts to pick up and the phrase- â€œROGUE-LIKEâ€ starts to bug you immensely. As I subtly mentioned above, this game is indeed â€œrogue-likeâ€, meaning when you die, you are dead. Seems like a silly thing to say, but in most other games with checkpoints, you die then go back to the checkpoint, but in Legends of Dungeon when you die, that character is forever dead. This particular feature makes such games challenging and frustrating in equal measure. It adds to the thrill of the fights later on when youâ€™re down-to-the-wire being attacked by all sorts of ne’er-do-wells. The combat is interesting, although it didnâ€™t feel particularly engaging in the early stages of play and felt a little imprecise later on. I admit that might have partly been my less than dexterous digitsâ€™ fault, but it still felt a little off. At some points I was just waiting for enemies to attack me so I could smack them down with my sword, and when they never did it took some of the satisfaction out of the whole experience.

If youâ€™re like me and appreciate the vintage that this game reeks of, you will love the graphics. It sports some extraordinary dynamically shaded pixel art that makes the game look fantastic. Like seriously fantastic. I read the LoD blog post for it found here and was fascinated by the process. Iâ€™d never heard of normal-mapping a 2D sprite before, and the effect is crazy good. The animations for the characters are pretty simple, and thereâ€™s not many movement animations of your character model, but it fits in well with the game’s vintage aesthetics. The simple, yet aesthetically pleasing, graphics belie the depth (and fun!)

The sound in this game goes from uplifting questing music to depressingly creepy (and hundreds of variations thereof) in what felt like an instant. It uses a randomly built soundtrack that is compiled from 244 tracks to add to your unique game experience. The tracks vary from some really eerie stuff to some cheerful-ish tunes to get you on your way. It’s hard not to appreciate the soundtrack when it manages to give you the random creeps every 10 mins.

The multiplayer featured in the game is based on local play on one PC. In other word, four players play on the same pc with game-pads. Simple. It upholds the vintage style, sure, but is kind of a pain when you want to play with friends on the other side of the world, and it’s really kind of basic, considering the advances in multiplayer in games of recent generations.

Remarkably, so far I’ve experienced no glitches or bugs in play – the game runs smoothly and is pretty rage-less. Aside from the limited multiplayer, the game overall is very sound.

Legend of Dungeon has many commendable features that Iâ€™ve already mentioned; great visuals, great sound and of course, the â€œSultan of Coffeeâ€.Â  But there is a feature, the online scoreboard, which puts the cherry on top of this vintage little lovely. Youâ€™ll find me at the bottom, sucking, by the way. Honestly, this game is as genuine and as fresh as can be. The detail and work that went into releasing this is phenomenal. Many game developers spend millions of dollars, use the best resources available, and still release steaming piles of excrement (Iâ€™m looking directly at you, Gearbox – Aliens: CM was a train wreck). Robot <3 Kitty built this in a treehouse, with expert craft, good work ethics, and boundless creativity. Buy this game. You need it in your life. Itâ€™s not expensive, itâ€™s worth the money, and it will give you hours of enjoyable play time. Robot <3 Kitty – more of the same please. Meow.

Former Staff Writer Fraser enjoys long walks on the beach, and doesn't like rude people. He also plays a ludicrous amount of games on both PC and PS3 and is Studying Computer Games Development at college in Scotland, U.K., and of course games journalisming with these fine fellows you see above and below. His wallet fell seriously ill in 2009 of a Steam Sale and has never recovered since, leading to many, many games. He has high hopes that he can suitably inform and entertain many of you fine people, and play a part to make SpawnFirst-a great website, even better. As ever, feel free to add his steam account.
You might also like
indielegend of dungeon