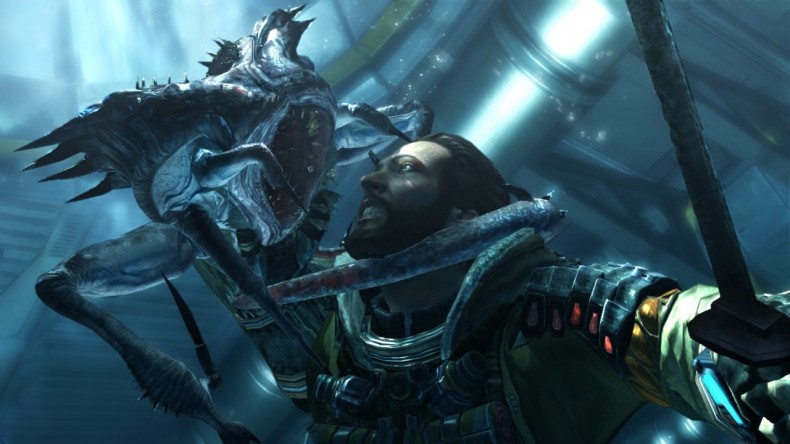 Lost Planet 3 contains a good story with a likeable, and very human, protagonist, yet this isn't enough to even recommend a rent. The campaign is boring, predictable, and extremely generic while the multiplayer is a travesty that can't even get the basics right. LP3 had the potential to be a good game, but lazy design and a lack of effort from Spark Unlimited drag the game down to the point of no return.

It’s very rare to see a normal person playing the role of protagonist in an action game, much less a sci-fi game.Â In a genre mostly comprised of various space marines, it’s nice to see more believable characters taking center stage for once. Despite the change in character design and story structure, Lost Planet 3 sports the same generic gameplay of most third-person shooters.

Lost Planet 3 puts players in the shoes of dedicated family man and Nick Cage look-alike, Jim Peyton.Â In order to support his wife and newborn son, Peyton volunteers to work as a miner on the series’ infamous planet E.D.N. III.Â Â With his trusty sidearm and mining robot at the ready, Peyton does everything in his power to get the job done and provide for his family back home.

Peyton, who is both likeable and easily relatable for any gamers with a family, is a unique character for a video game.Â  In fact, most of the characters in the game are ordinary people in a less than ordinary situation.Â Everyone, even the planet’s wildlife, are just trying to survive.

The first act of the game plays out much like an autobiography, but once players reach Act 2, the story slowly starts to fall in the normal routine of sci-fi action stories.Â  If you haven’t played the first game, then it will soon be apparent that the company Peyton and friends work for is secretly evil.Â  Despite some clichÃ©s, Act 2 is still believable and intriguing, but sadly breaks apart at the final act.

It is safe to say the final hours of the game are a mess in terms of story and gameplay because the game goes right back to familiar territory. There’s a malevolent antagonist, inhumane enemies, and for some reason, Peyton does something both out-of-character and extremely stupid.Â Still, aside from the terrible final act, the story is Lost Planet 3‘s greatest strength.

I think the motto of LP3‘s game director is “If it’s worth doing once, it’s worth doing again.”Â Practically every boss, every object, or every set-piece will need to be completed or collected at least twice.Â This is yet another game containing a lazy design style used to pad out the story campaign.

Speaking of lazy, the gameplay is as basic as a third-person shooter can get.Â Players pick two weapons and then point said weapons at monsters until they either go away or devour the unlucky protagonist.Â There are a decent amount of weapons to choose from, but only the starting weapons are of any use.

Despite weapon choice, combat is still boring and uneventful.Â Enemies are split between melee or long distance, with the selection of a very select few who are good and both.Â For the most part, the same strategy can be applied to all enemies in order to dispatch them.

The human enemies are easily the worst because they recklessly charge into the player’s bullets while shouting, “Give up.Â  We are professionally trained soldiers,” which is a statement that holds absolutely no credibility.

Even the gigantic bosses are boring and generic fights.Â Every boss contains one or more bright orange weak points which must be hit to defeat the monster.Â Same strategy applies to all: dodge, shoot, repeat.Â Of course players must also challenge the beast to a rematch in Peyton’s mining robot, the Rig.

Fighting in the Rig could have potentially been the best part of the game, but Spark Unlimited missed the mark by a good mile.Â  Every battle is essentially a QTE in disguise as players are prompted on exactly how the fight should play out. The brutal finishers of the gargantuan beasts would be more rewarding if I had the freedom to get there my way.

Parallel from the story missions, players can partake in optional missions or explore the environment after obtaining new equipment.Â Unfortunately, there isn’t much reason to do so since the rewards aren’t worth the trouble. It is also worth noting the grappling hook has been restricted to only work on specific areas so players won’t be able to zoom through levels like in the first game.

From a graphical standpoint, the game looks good despite a bland art direction.Â  Animations are inconsistent as characters switch from believable movements to stiff-as-a-board animations from time to time.Â  It also doesn’t help that the frame rate has a tendency to drop during big fights.

Overall sound design is average as well, though the voice acting is done well.Â  There isn’t any sound effects or music tracks that stand out so sound design does the bare minimum, but gets the job done.

Even with its flaws and inconsistent match quality, I quite enjoyed my time with the multiplayer of the first Lost Planet.Â  After finishing the single player campaign, I was looking forward to the multiplayer.Â  Sadly, LP3 is a far cry from its predecessor’s multiplayer.

LP3 contains one of the most poorly designed multiplayer in any third-person shooter.Â  Connection issues return with a vengeance creating long wait times to get into matches and unstable lobbies where players will likely be kicked if they so much as cough near their consoles.

Actually, the long wait times are a blessing in disguise because the game features few modes and abysmal balancing issues.Â Starting equipment is terrible and leave newcomers with a significant disadvantage while the so-called matchmaker rigs the match.Â Almost every game, I found myself in a group of low-ranking beginners, much like myself, against more experienced players, not in a party mind you, most of the time.

To keep up with these players, one must spend points on the hex-based upgrade board.Â  this upgrade system give players freedom on how to upgrade their character, but the programming is extremely stingy with distributing points so don’t expect much despite a win or a good performance.

The last thing to note on multiplayer, is a mode titled Akrid Survival.Â Two teams of three fight against two waves of aliens and then each other in one of the most pointless modes ever designed.

Had both teams been forced to fight each other while defending against the aliens at the same time, then it would have been interesting.Â Scoring in this mode also doesn’t make much sense since I had the most Akrid and player kills, yet I was still on the bottom of the scoreboard.Â  In short, avoid this game’s multiplayer like the plague. Lost Planet 3 contains a good story with a likeable, and very human, protagonist, yet this isn’t enough to even recommend a rent.Â The campaign is boring, predictable, and extremely generic while the multiplayer is a travesty that can’t even get the basics right.Â LP3 had the potential to be a good game, but lazy design and a lack of effort from Spark Unlimited drag the game down to the point of no return.

Former Contributor Chris West is a graduate of Texas Tech University where he earned his BS in Electronic Media in Communications. Chris has been passionate about games since he was a kid and today prefers games with a strong narrative. He also has a soft spot for horror games, legitimately scary games mind you, and any game claiming to be challenging, Dark Souls for example. When he isn't playing games, he is pursuing his other passions: music and photography. Chris can play both guitar and bass and then take high quality pictures of the performance with his camera. In the end, Chris enjoys writing about his passions and ideas, when he isn't destroying his friends in Call of Duty.
You might also like
CapcomLost Planet