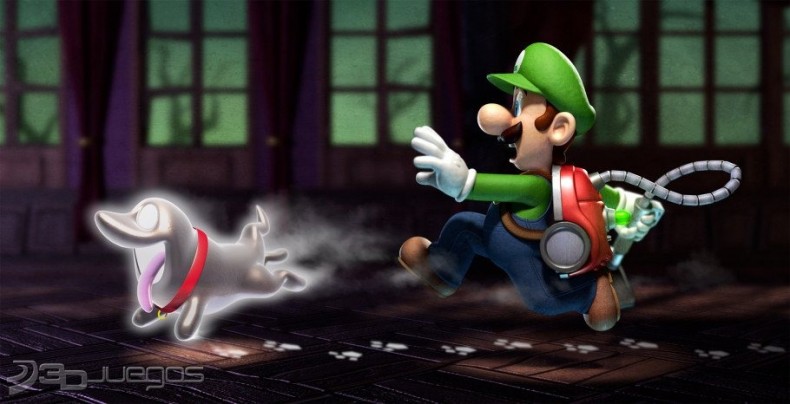 The story retains Nintendo's "magic", as do the visuals; Figuring out the puzzles is rewarding; A total of five mansions helps the game stay interesting from start to finish; ScareScraper is fun

Too many escort missions; Too much object hunting; Lots of backtracking; The save system is just plain terrible

Luigi's Mansion: Dark Moon is a worthwhile experience and a quality handheld title. Even though I know it's a better game by design than its predecessor, I still prefer the original. But hey, Dark Moon still provides hours of fun and proves that Luigi can compete with his older, fatter brother.

I Ain’t Afraid of No Ghosts!

Luigi’s MansionÂ was one of the launch titles for the Nintendo GameCube alllll the way back in 2001. Time hasn’t done it any favors, but back then it was one of the most unique games ever devised. It featured Luigi in his first starring role in a Nintendo game (nobody counts, remembers or cares about 1992’s appallingly horrendousÂ Mario Is Missing!). I’ve played throughÂ Luigi’s MansionÂ several times, and I often get an urge to play it again. EnterÂ Luigi’s Mansion: Dark Moon, a game that attempts to improve upon its predecessor’s shortcomings. It technically succeeds, but left me with no desire to play it again.

Luigi is called upon by Professor E. Gadd (who is also in Luigi’s Mansion) to re-collect pieces of the Dark Moon, which has been shattered, causing the peaceful ghosts that live in Evershade Valley, the game’s world, to start acting all cray cray. It’s a good-natured and humorous little tale, full of that classic Nintendo charm. The story does unfortunately settle for a predictable twist at the end, but it’s interesting up until then. Anyone who has played the original game will see the twist coming before they even start playingÂ Dark Moon.

Much like in the first game, Luigi spends the majority of his time inÂ Dark MoonÂ sucking up ghosts in the Poltergust 5000, which is attached to his back and is basically a high-powered vacuum cleaner. Ghosts must still be flashed with the Poltergust’s flashlight before they can be defeated. InÂ Dark MoonÂ the flashlight can be charged up to flash a larger portion of a room, which oftentimes can lead to Luigi discovering invisible ghosts that otherwise couldn’t be found. It also assists in incapacitating several ghosts at once. The Poltergust and flashlight can be aimed up and down using the X and B buttons on the 3DS.

The Poltergust is also used to solve puzzles. Luigi can suck up carpets, wallpaper and various other environmental objects in order to discover hidden areas or find a item that’s necessary to advance. The flashlight must be used to open certain doors. The Poltergust also eventually becomes equipped with a black light, which is used to make invisible objects, such as doors, reappear. The puzzles are all somewhat easy to figure out, but some are still pretty clever.

Players have to explore five different mansions this time as opposed to the original’s one. Each mansion is more difficult than the one before it. The enemies and puzzles become more challenging, and players must complete more objectives. These objectives include escort missions and hunting down items that a ghost dog steals from Luigi. Most missions include a boss battle, and these battles range from fighting four sister ghosts who hold mirrors in front of their faces to figuring out a way to take down a giant spider. The game manages to keep throwing new variables into the overall equation, and as thus stays fresh throughout.

Dark MoonÂ is one of the best-looking games for the 3DS. The visuals are bright, inviting, crisp and way prettier than screenshots suggest (as is the case with many 3DS games). The 3D effects are the best I’ve seen in a handheld game, though I turned them off for most of my playthrough (I have terrible eyesight and get headaches easily). Luigi’s animations are fantastic, from his timid footsteps to his goofy run to his hilariouslyÂ over-dramaticÂ facial expressions.

The music inÂ Dark MoonÂ is barely noticeable, but I found myself humming along with Luigi humming along with the main theme. This is a game about creating atmosphere, and it succeeds in the sound department. I still have the sucking-ghosts-into-the-Poltergust music stuck in my head. Luigi’s voice is a constant comfort. In this year, his year, it’s reassuring to know that even if someone plays second fiddle to someone else for most of their life they’ll eventually get their time in the spotlight as well. Professor E. Gadd’s chattering speech is endearingly annoying, much like the man himself. 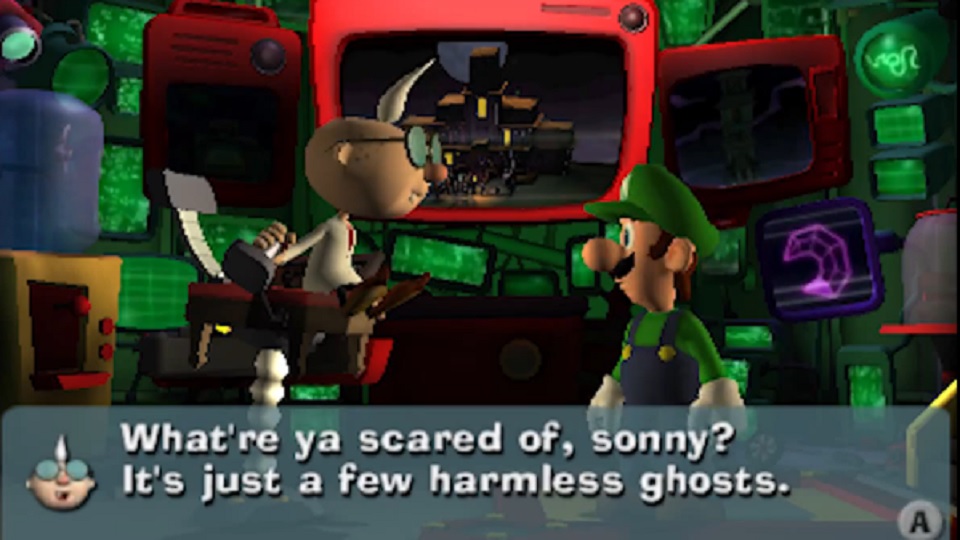 The multiplayer offering inÂ Dark MoonÂ is fairly engaging. It’s called ScareScraper and lets four players track down ghosts together (single player options are also available). Players can combine the power of four separate Poltergusts to suck up ghosts. Especially useful is being able to simultaneously flash ghosts, which causes a sort of blinding effect onscreen. The multiplayer is a nice addition to a game already filled with content. It doesn’t feel like an afterthought because it’s actually fun.

Collectibles are hidden throughout each of the mansions inÂ Dark Moon, but they’re only worth seeking out for hardcore completionists. Every item and new ghost type discovered get stored in a vault below Professor E. Gadd’s lab and can be viewed later. I grew tired of hunting down hidden gems, but it’s not like I had to. The extra content is there for folks who care about that sort of thing.

I’m fine with the occasional escort mission in a game, butÂ Dark MoonÂ includes way too many. Just how helpless is Toad, anyway? I also got really, really sick of chasing down that stupid dog every time he stole something from Luigi.Â Dark MoonÂ is all about backtracking galore, but so was the original.

However, the save system inÂ Dark MoonÂ is abominable. The game autosaves in-between missions, which means people who really explore each mansion will be spending over 20 minutes on each mission without checkpoints or an option to manually save. If players turn off or close their 3DS before the end of a mission, or Luigi or the 3DS battery die, it means an automatic mission restart. This makes a time-based mission towards the end of the game a test of pure willpower, and it almost led to me stopping playing the game entirely.

Luigi’s Mansion: Dark MoonÂ is a worthwhile experience and a quality handheld title. Even though I know it’s a better game by design than its predecessor, I still prefer the original. But hey,Â Dark MoonÂ still provides hours of fun and proves that Luigi can compete with his older, fatter brother. I haven’t played any other games in 2013 that feature Luigi, but the Year of Luigi obviously got kicked off good withÂ Dark Moon. It’s nice to see the brother I prefer getting a little attention. All hail the man in green!

Features Editor Buddy was a journalism major at the University of Alabama. He now spends his days writing novels that will probably never get published and wishing he were an extra in an Anthony Hopkins film. He's been gaming since he can remember and has owned every console from the NES to the TurboGrafx-16 to, yes, even the Phillips CD-i. He loves all games, but his favorite genres are shooters and RPGs. His favorite game is The Legend of Zelda: Ocarina of Time.
You might also like
luigiMarioNintendo