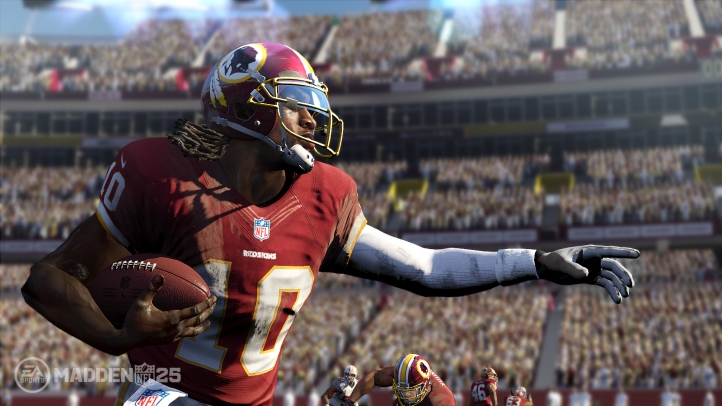 Graphics look dated at times, some glitches, not much different from Madden 13

I originally started off only renting Madden 25, but after playing my first game I knew I was hooked and went out and bought it. That should say it all right there.

Twenty. Five. Years. That’s how long the Madden series has been around. Take a moment and let that sink in. Thatâ€™s older than most of the people on staff here a SpawnFirst, myself included. This titan of a franchise has seen good times and bad, great players and less than stellar ones, but it always reminds us, at the end of the day, that Madden is the king of football. Serving as both a homage to the legacy of the series, as well as its latest installment, Madden NFL 25 follows in the footsteps of its predecessors and produces yet another strong addition to its lineage.

Iâ€™m not going to lie, I was going to make up some bullshit story about how you play as a football coach whose wife is kidnapped by an evil dragon and the only way to save her is to win the Super Bowl, but that is both stupid and waste of time since all I want to do is get back to playing Madden, so Iâ€™ll make this quick. The story in career mode is the same as every Madden game: get your team to the Super Bowl and bring home the Lombardi Trophy. Career mode allows you to take 3 â€œpathsâ€ with the story, allowing you to play as either a player, the coach, or the franchise owner. Each has their own unique traits and abilities. For instance, if you select to be the owner, you can make a lot of decisions about the franchise, even changing its name and location. This allows the player to experience the game a different way depending on who theyâ€™re playing as.

If I were able to write everything you can do in Madden while on the field in detail, this review would end up looking like a doctoral thesis, so I will instead give the hyper-abridged version. EA tries to make the game feel like real football broadcast and they succeed on all accounts. From Phil Sims and Jim Nantz commentating every play to all the sponsor logos that pop up next to the random stats, this feels like a live telecast. Even some of the camera angles used during kickoff and field goals look like they’re from a real NFL game. This sort of immersion, at times, made me forget that I was even playing a video game.

One of the most impressive aspects of Madden NFL 25 is the refined physics of the game. The engine from Madden 13 has been tweaked and improved to give an even more realistic feel. Players’ hands dynamically come to the ball smoothly without as much as a stutter. Tackles look real and hard hitting as you sack the Quarterback. Running backs cut harder and more precisely than ever before. One of my favorite things that I noticed is when the player you’re controlling collides with someone from your own team, you player instinctively raises a hand and gently pushes off the player, just like in real life. I really appreciated that attention to detail and realism.

When it comes to being on the field, there’s almost no limit to things you can do. You can call audibles, pick plays, change hot routs, single out a player you want your defense to crush, predict the opponent’s play, and so much more. To be honest, it’s almost overwhelming, but then again, this is the same pressure quarterbacks and coaches go through in real life and it made me realize how hard their jobs actually are. However, even with all these options, the controls were well laid out (although I would have appreciated some more tutorials for people like me, who haven’t played Madden in years) and the gameplay was nice and smooth.

I had a love/hate relationship with the graphics in Madden NFL 25. One minute, I was in awe of how real the uniforms and helmets looked, the next Iâ€™m grossly unimpressed by how bad everything off the field looks. It was strange watching everything on the field look crisp and real, then to see the camera cut to the sideline to show amorphous Gatorade coolers and clearly generic filler players/coaches. To go along with the sometimes lackluster graphics, there were several graphical bugs, the biggest one being my custom built coachâ€™s eyes occasionally being outside his head (Editor’s Note: WTF). These issues would really bring me out of the game and continually bother me.

The sound, on the other hand, was very well done. Phil Sims and Jim Nantz did a great job recording a bunch of quality insights to make their reporting sound believable, and, although some of it did get repetitive, it was definitely one of the stronger points of the game. On top of Phil and Jim, the sound effects were also very solid. The grunts and groans of players getting tackled, the sound of pads and helmets colliding, and the cheer of the crowd all sounded amazing and realistic.

Maddenâ€™s online multiplayer is just as enjoyable and smooth as ever. Go head-to-head with a friend or take on some random person; either way, it’s loads of fun. While I didnâ€™t appreciate getting my ass handed to me by my friend, Brad, watching big plays unfold and correctly reading what play he was about to run was both rewarding and addictive, keeping me coming back for more.

As I mentioned earlier, the graphics at time look nowhere close to where they should be in terms of quality, and there are the occasional glitches too. Other than that, my only issue is that Phil and Jim do get repetitive quickly.

Madden NFL 25 also sports Ultimate Team mode. In this game mode, you get trading cards of famous players and try to assemble your â€œUltimate Teamâ€. Playing as your ultimate team to complete challenges gives you in-game currency that you use to buy new booster packs with more players for you add to your team. While I havenâ€™t played around in this mode too much yet, it was interesting watching Tom Brady hand the ball off to LeSean McCoy. …unless you already have Madden 13. Not a whole lot has changed since the last game.

I originally started off only renting Madden 25, but after playing my first game I knew I was hooked and went out and bought it. That should say it all right there.

SpawnCast Co-Host/Creative Co-Director Brian is member of the University of Mary Washingtonâ€™s class of 2012 and graduated with a BS in Computer Science. He has been gaming since the first day he held an original GameBoy in his hands and hasnâ€™t stopped since. He now plays mostly shooters and RPGs on his Xbox 360 but will occasionally work in some sports or fighting games when heâ€™s in the mood. He is also a huge fan of playing marathon sessions of Legend of Zelda when the opportunity arises.
You might also like
EAEA Gamesmadden nfl 25