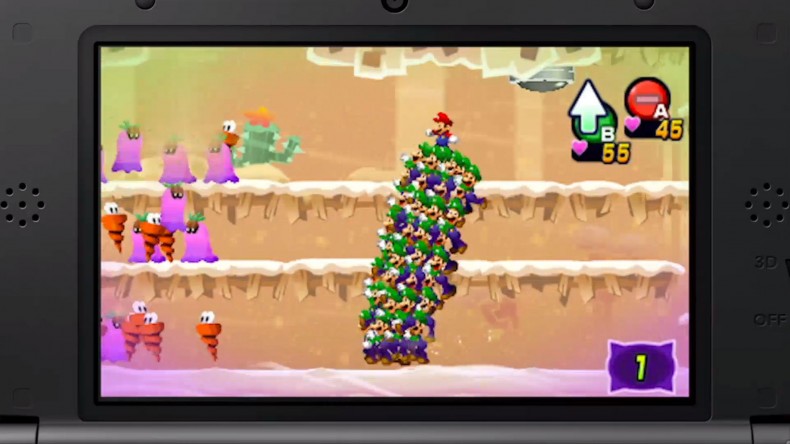 The turn-based combat is better than ever; The dream world sequences are fun; Lots of gameplay variety

The tutorial is too long; It's extremely padded

Mario & Luigi: Dream Team is worth purchasing simply because it offers so much. It contains much more content than most $60 console games do. While it does overstay its welcome, it's still a game filled with so much joy and opportunity that its minor annoyances can easily be overlooked. It's a worthy addition to a pretty great series.

17 years have passed since the release ofÂ Super Mario RPG: Legend of the Seven Stars,Â which is kind of unbelievable. It’s because of that game that theÂ Paper MarioÂ andÂ Mario & LuigiÂ series exist.Â Mario & Luigi: Dream TeamÂ is the latest in a long line of turn-based Mario RPGs. It followsÂ Mario & Luigi: Bowser’s Inside StoryÂ and immediately conjures up memories of that moment 17 years ago when the world got its first chance to play through a truly great game.Â Dream TeamÂ is by no meansÂ Super Mario RPG, but it is solid reminder that theÂ Mario & LuigiÂ series is worth keeping around.

InÂ Dream TeamÂ Mario and Luigi travel to Pi’illo Island, home of the Pi’illos, who are a race of creatures that look like pillows and enjoy sleeping. Of course that sounds ridiculous; it is. And of course, Princess Peach gets kidnapped, and of course Mario and Luigi must save her. However,Â Dream Team,Â just like the otherÂ Mario & LuigiÂ games, contains a story that stands out thanks to its humorous and clever writing. The series revels in its ability to poke fun at the past while also suggesting that there’s more to its cast of characters than most people may realize.

WhatÂ Dream TeamÂ really is, is a game about Luigi, which it obviously has to be, in this, the “Year of Luigi”. Mario and Luigi are tasked with saving members of the Pi’llo race (and Peach), and to do so Mario must enter the dreams of Luigi, who is an expert at falling asleep in less than a second. A large majority of the game takes place in Luigi’s dreams. It’s cool to finally get a glimpse inside the mind of the man in green. Some of the revelations stored in Luigi’s subconscious are shocking, and some are actually moving. I almost had to wipe away a tear at one point.

The turn-based mechanics from the otherÂ Mario & LuigiÂ games have been refined and are better than ever inÂ Dream Team. The combat still relies on timed button presses for offense and defense, but it keeps mixing things up by introducing several new approaches as the game progresses. For example, Mario and Luigi gain the ability to use hammers eventually, which allow them to deal damage to enemies they can’t jump on without taking damage. It’s really fun to mix up attacks and attempt to dodge enemies’ counterattacks. Dodging is simple enough to begin with, but becomes much more challenging later on.

InÂ Dream TeamÂ the Super Mario Bros. are constantly being thrown into random scenarios. For example, one moment they might be exploring an environment in order to reap its rewards before they’re thrown into a boss battle against a malfunctioning water robot. When that’s over Mario has to enter another of Luigi’s dreams. The gameplay variety on display inÂ Dream TeamÂ is unprecedented, it keeps introducing new elements throughout.

The biggest change to the series comes in the form of Luigi’s dreams. When Mario enters one of these dreams the game shifts to a 2D perspective and becomes a platformer. The player must then navigate Mario and Luigi through more traditional Mario levels while also battling enemies and solving simple puzzles. The puzzles are where the interesting stuff lies because to solve a lot of them the player must interact with the sleeping Luigi on the bottom screen of the 3DS.

This is where the game gets even weirder. While Luigi is sleeping he is in his dreams, but his unconscious body takes up the entire touchscreen portion of the 3DS. A press of a button sends Luigi to the background in the dream world, which allows Mario to do many things he couldn’t do before. For example, if Mario can’t reach a platform in the dream world, the player must tug on Luigi’s mustache on the touchscreen, which also causes the mustache of the dream version of Luigi to extend, creating a sort of catapult for Mario. If a staircase is facing in the wrong direction, the player must tickle Luigi’s noise, which causes him to sneeze in the dream world. This creates a tornado, which then rotates the staircase. It avoids being gimmicky by actually being very enjoyable.

Dream TeamÂ isn’t exactly pushing the graphical limitations of the 3DS or anything, but it looks decent enough. It’s very colorful and vibrant. The characters each come with their own visual flair and unique animations. Most of the enemy designs are cool (I’m sorry to say those poor Goombas are just as lame as they’ve always been). Plus, Pi’illo Island is a big game world that’s worth checking out.

The only voice acting inÂ Dream TeamÂ comes in the form of Mario saying “Luigi!” or Luigi saying “Mario!” or both brothers speaking some language that is complete gibberish but sounds something like Italian. Most of the dialogue in the game is delivered via text boxes. The soundtrack is fitting, but never really stands out, which is odd for a Mario game. The only song I ever found myself humming along with was a slowed-down version of the original Mario theme. Everything else was just background noise.

To sayÂ Dream TeamÂ feels padded is a bit of an understatement. The tutorial takes too much time and is annoying. While the combat is enjoyable and less monotonous than standard RPG fare, the game is just plain too long. The attempts to mix things up feel like desperation after a certain point, and the story sags and nearly collapses under its own weight long after it should have already been over. I stopped caring about the inhabitants of Pi’illo Island after the game kept trying to force their lore down my throat. I was ready to leave Pi’illo Island long before the credits rolled.

Also, for a game with so much variety, it’s surprising that many areas inÂ Dream TeamÂ contain the same enemy type. This means having to rely on the same pattern for attacking and dodging time after time after time, which once again makes the game feel padded. These are minor issues that don’t preventÂ Dream TeamÂ from being enjoyable overall. They do, however, hold it back from greatness.

Mario & Luigi: Dream TeamÂ is worth purchasing simply because it offers so much. It contains much more content than most $60 console games do. While it does overstay its welcome, it’s still a game filled with so much joy and opportunity that its minor annoyances can easily be overlooked. Luigi’s year continued being a good one thanks toÂ Dream Team.Â It’s a worthy addition to a pretty great series.

Features Editor Buddy was a journalism major at the University of Alabama. He now spends his days writing novels that will probably never get published and wishing he were an extra in an Anthony Hopkins film. He's been gaming since he can remember and has owned every console from the NES to the TurboGrafx-16 to, yes, even the Phillips CD-i. He loves all games, but his favorite genres are shooters and RPGs. His favorite game is The Legend of Zelda: Ocarina of Time.
You might also like
luigiMarioNintendo