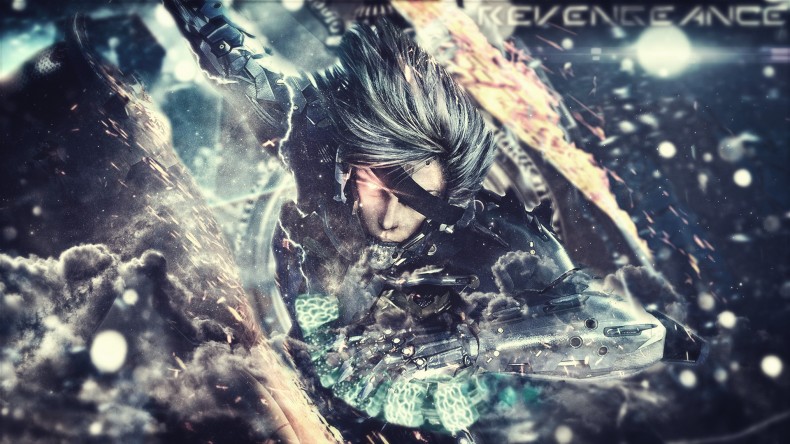 Metal Gear Rising: Revengeance is a difficult game to judge; it has great combat and boss fights but is marred by bad writing, a terrible finale, and an unlikable protagonist. I recommend renting this one for anyone who likes hack-and-slash action games and anyone who is a fan of Metal Gear; though, I don't feel like this is a Metal Gear game intended for its primary fanbase.

Hideo Kojima has made great strides in the world of gaming, but Raiden is not one of them. Ever since his first appearance in Metal Gear Solid 2, the character has received poor reception from fans and critics alike. He got much more praise in the fourth game, but did not win the hearts of every gamer, including myself. In the latest Metal Gear game, Kojima hoped to make Raiden a much more appealing character to the masses. I don’t believe he succeeded, but at least the game is fun.

Metal Gear Rising: Revengeance takes place four years after the events of Metal Gear Solid 4 and serves as a side story, featuring Raiden as the lead. The hardened cyborg now works for the private military company Maverick alongside a multicultural team of people with various skills.

The game begins with Raiden working as a security detail in charge of protecting the prime minister of an unnamed African country. Like any good action game, things don’t stay quiet long and Raiden is shortly forced to fend off an army of cyborgs and even an upgraded Metal Gear Ray from MGS 2. Unfortunately for Raiden, he is outmatched by one of the elite soldiers and not only fails to save the prime minister, but also barely manages to walk away from the fight alive. 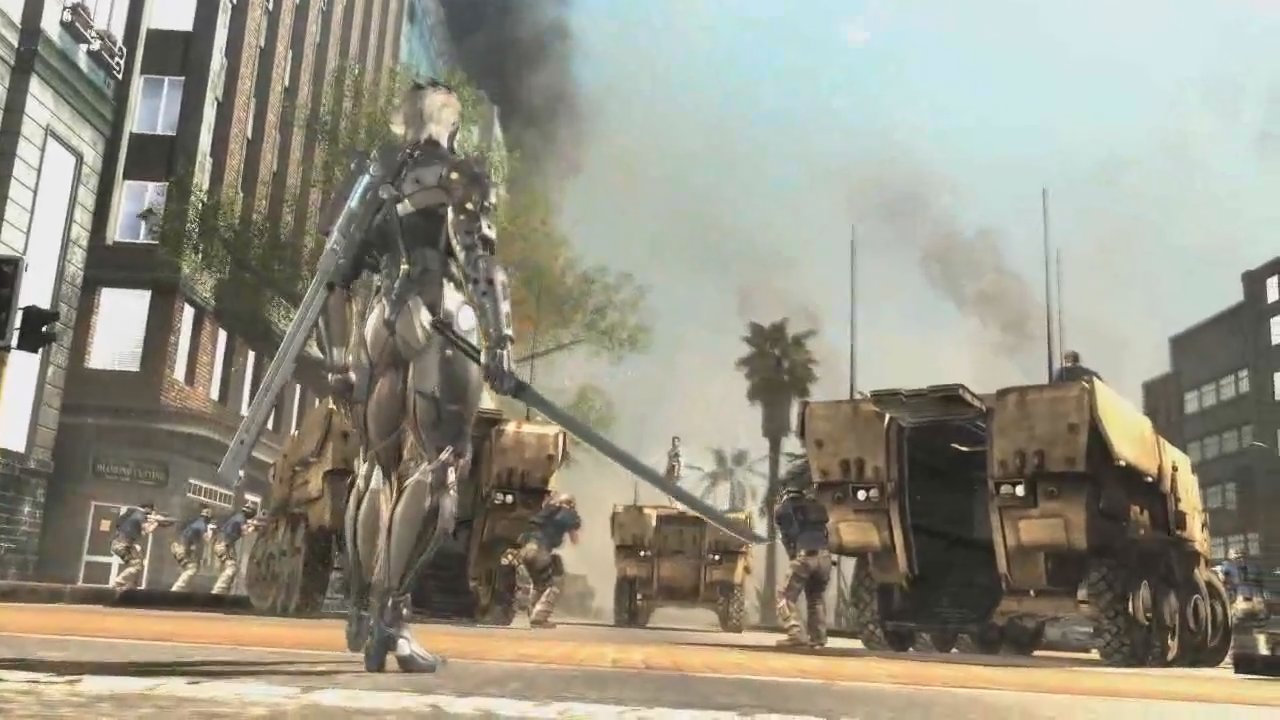 After getting back on his feet, Raiden pursues the people behind the attack around the world as he uncovers a dark conspiracy that could bring about another war. This may sound good, but the game is written quite poorly. It is very hard to take the game’s plot and characters seriously because the tone is schizophrenic. For example, Raiden follows a lead in Mexico where a body harvesting facility may be hidden, but shows up in town wearing a sombrero and poncho; in short it goes from being dark and grim to goofy in an instant.

The plot is all over the place as well. Raiden goes around the world to stop the plot of one villain after another only to find out it was misdirection for another crazy plot. The game’s true antagonist is only hinted at once before revealing his true identity in the final hour of the game.

The characters aren’t done very well either. The people Raiden works with are essentially stereotypes in some way; mainly the German and Russian characters who finish most sentences with either a “da” or a “ya.” The antagonists are mostly psychopaths but the writers try, and I emphasize the word “try,” to have them explain their reasons for fighting.

Raiden is the worst of all of them though. He was much more tolerable in MGS 4, but MGR is a few steps back for the character. Like the game’s tone, the Raiden is also schizophrenic in many ways. He begins the game as a man with strong convictions trying to be a hero, then he has a change of heart and becomes extremely depressed while still in the player’s control, then decides it’s easier to be a cold-blooded killer, and then goes back to a goody-goody.

Check out Justin “SlasherJPC” Celani’s take on the PC version of Metal Gear Rising below!

I can understand attempting to make a strong character by having the man change based on the experiences of his past and the current events of the game, but none of it is believable because the changes are so quick, and it tarnishes the character’s image more so than in MGS 2.

None of this is too surprising since this is a game developed by Platinum Games who I believe to have terrible writers, but great designers whose gameplay elements easily overshadow the story elements; Metal Gear Rising keeps the trend going as well. 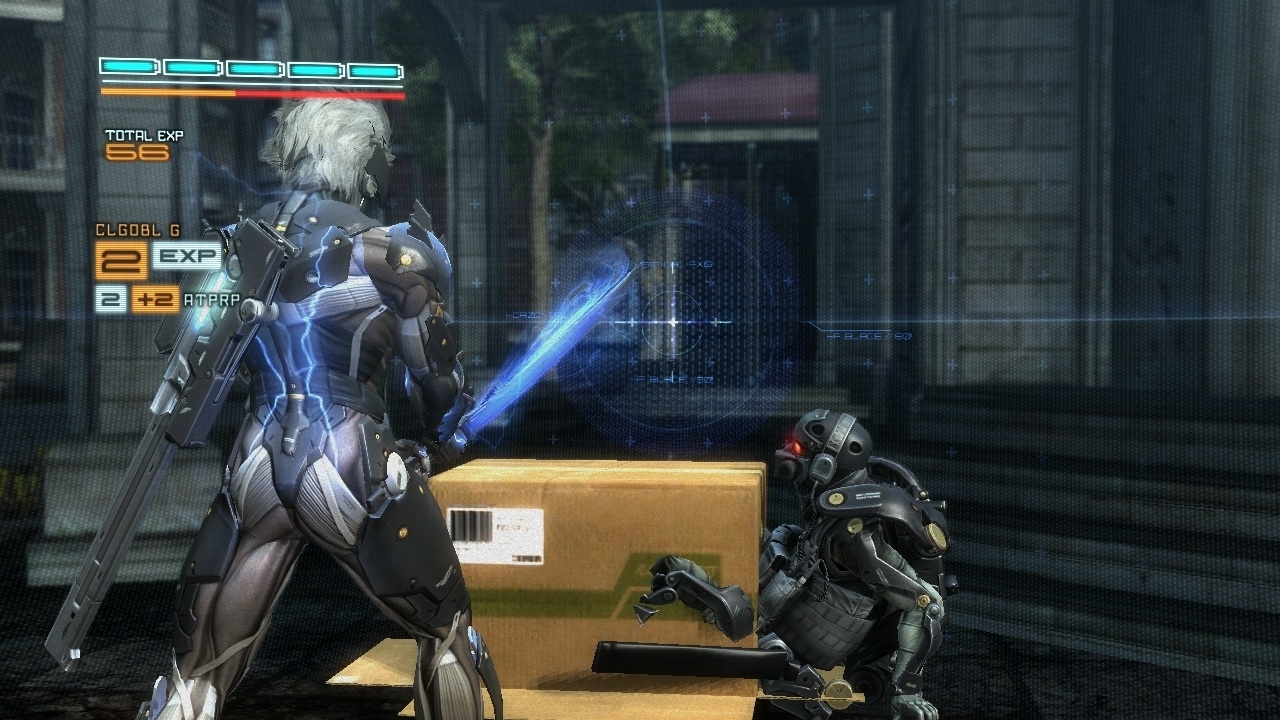 Revengeance follows the typical hack-and-slash formula of using different attacks to string together combos while defending and countering enemy attacks. The main form of defense in this game is the parrying system.

To survive enemy attacks, the simultaneous input of both the control stick and the attack button will cause Raiden to either block an attack or throw an enemy off balance leaving him wide open for a counterattack. It sounds easy, but it requires skill and near perfect timing to successfully parry multiple attacks and fight back.

When the player gains an opening to attack, enemies can either be finished off with a combo or receive a surgically precise incision to an enemy’s weak point using the blade mode. This mode allows the player to aim Raiden’s sword to accurately cut an enemy or object by either using the two attack buttons or aiming with both the left and right analog sticks. Like parrying, blade mode requires some skill and practice to master but well placed strikes can both quickly finish an enemy, and replenish health.

These both need to be mastered fairly quickly because the game’s many boss fights will be very difficult to win without them. Every boss brings something new to the table, and serves as a trial by fire for mastering the parry and blade mode. Naturally, Raiden has to block their strikes since there isn’t a dodge mechanic, which requires the precision of blade mode to either block a special attack or break the enemy’s defense. 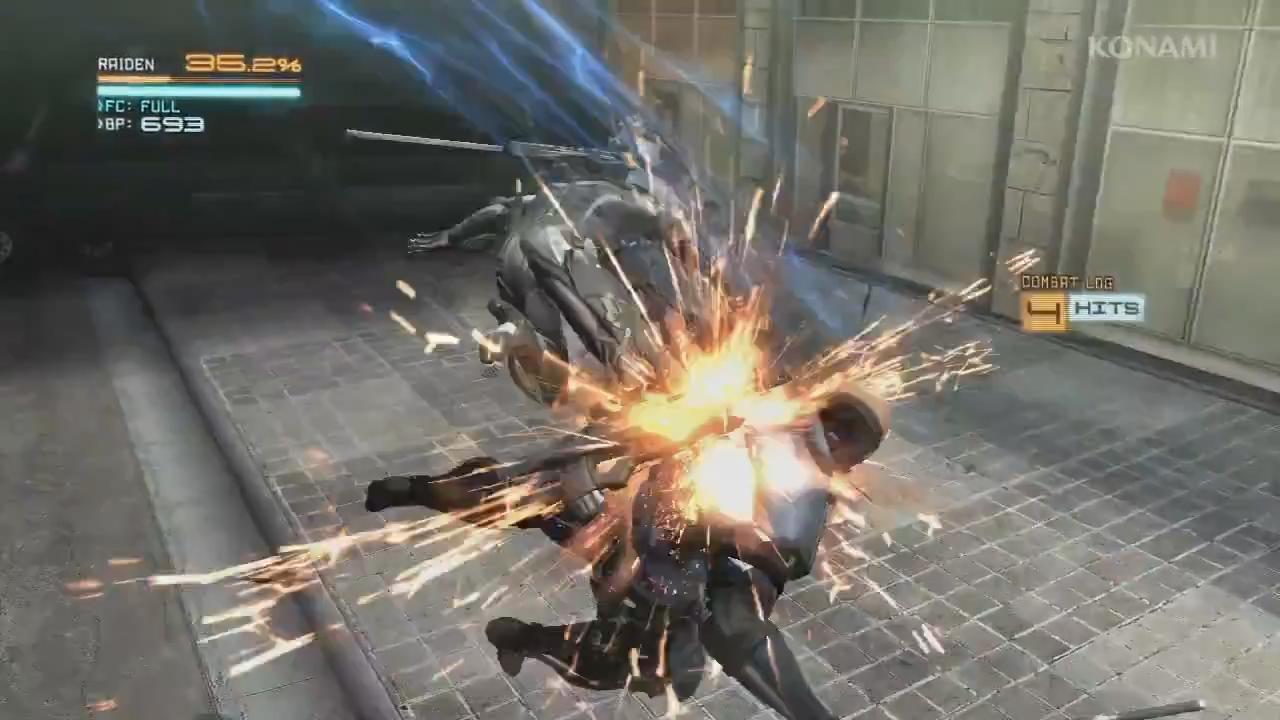 The end boss of level three is a perfect example. In order to beat this strange character, a cyborg who can detach most of his body, Raiden must first parry his many regular attacks, break apart his special moves with blade mode, and then hit his evasive weak spot with another precise attack. It’s a fun and challenging fight that truly serves as a test for the player’s skills.

Sadly, the game takes a wrong turn at the end with the last two bosses of the game. All that time perfecting the parry goes out the window with a majority of the attacks of these two bosses are unblockable. While I don’t wish to spoil the game, I feel the final boss drops the game’s tone back to goofy and ruins the finale.

Far behind the great combat and mostly great boss fights, stealth also managed to find its way into the game; granted this is a Metal Gear game so the developers were probably obliged to do so. Stealth in Metal Gear Rising is more of an afterthought than an integral gameplay mechanic, though. Players can run up behind or above an enemy, initiate a violent execution, and try to catch the rest of the area’s enemies off guard as well, but stealth isn’t mandatory since getting noticed just means fighting the enemies normally.

Revengeance may have a bad story, but the developers try and hide it with not only gameplay, but also with a great amount of eye candy. Everything in this game is over the top and crazy. Fights are fast and fluidly animated, Raiden and the bosses fight with bravado, and explosionsÂ with collateral damage fill the screen like a Michael Bay film. The only downside is the CGIs don’t look as good as the actual game.

The graphics and animation are easily the strongest pieces of the overall presentation, though the sound design never quite makes it to their level due to inconsistencies. Music is important for any type of creative media and Metal Gear Rising is no exception. All of the tracks in the game have a distinct sound found only in Japan and while some sound good and mostly set the right tone, the rest are looped Japanese rock songs. These tracks could have been significantly better had the vocals been extracted because the rest of the band sounds great as they are obviously skilled musicians.

The rest of the sound design is also inconsistent; sound effects are just fine but the voice acting is either passable or terrible. To be fair the writing is bad so the actors didn’t have much to work with, but that’s doesn’t give Raiden’s voice actor a reason to pretend like he’s Batman.

VR missions also return for another go around, but serve as a secondary mode where players are tasked with completing various challenges in order to gain a spot on the leaderboards. Extra modes like this are not necessarily my cup of tea since I don’t care about beating someone’s high scores. People who are interested in global bragging rights should enjoy this mode and the many challenges presented. 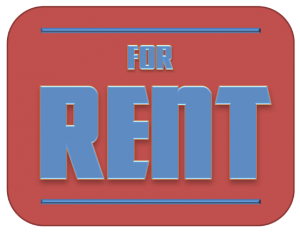 Metal Gear Rising: Revengeance is a difficult game to judge; it has great combat and boss fights but is marred by bad writing, a terrible finale, and an unlikable protagonist. I recommend renting this one for anyone who likes hack-and-slash action games and anyone who is a fan of Metal Gear; though, I don’t feel like this is a Metal Gear game intended for its primary fanbase. If Hideo Kojima does decided to do another spinoff, he really needs to focus on a more consistent presentation with some significant changes to the main character because Raiden has a long way to go before becoming a likeable character.

Former Contributor Chris West is a graduate of Texas Tech University where he earned his BS in Electronic Media in Communications. Chris has been passionate about games since he was a kid and today prefers games with a strong narrative. He also has a soft spot for horror games, legitimately scary games mind you, and any game claiming to be challenging, Dark Souls for example. When he isn't playing games, he is pursuing his other passions: music and photography. Chris can play both guitar and bass and then take high quality pictures of the performance with his camera. In the end, Chris enjoys writing about his passions and ideas, when he isn't destroying his friends in Call of Duty.
You might also like
Metal Gearps3review