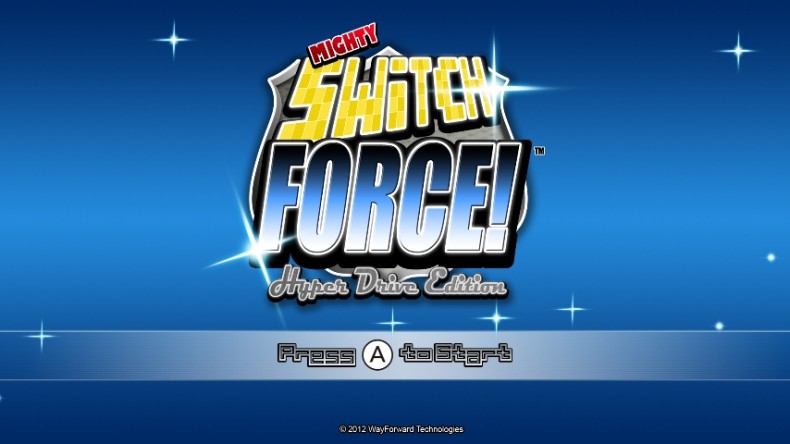 Platformer fans should enjoy Mighty Switch Force: Hyper Drive Edition for all it offers, even if some of the mechanics donâ€™t quite work out. Itâ€™s a compact experience that doesnâ€™t spend too much time getting in the way of itself, and its levels are focused enough that replays are always fun.

Sometimes there are games that fall between the cracks. Ones that couldn’t be reviewed because they came out wedged between a blockbuster heavy release season, and might have flown under the radar. Not quite “Worth a Play” feature worthy, ReSpawn Review games are just older games that we finally had a chance to play through.

Mighty Switch Force: Hyper Drive Edition from WayForward Technologies makes an already strong puzzle-platformer even better with redrawn graphics and extended, more difficult stages that make up for some of the titleâ€™s weaker ones.

Cybernetic police officer Patricia Wagon is on a mission to round up exclusively female convicts whoâ€™ve escaped prison very recently. Wagonâ€™s got the unique ability to switch aspects of the environment, hitting a button to make platforms pop into the foreground to be jumped on, as well as push obstacles out of the way. This ability carries the adventure through several (challenging) run and jump puzzles that see players snatching up 5 convicts, blasting away enemies and getting to the exit as quickly as they can. The game uses only 3 commands, but it uses them constantly for several different purposes. Running and jumping feel good, and shooting is a matter of tapping a button and watching weak enemies fall off of the screen. Switching, which is done with any of the shoulder buttons or the A button, takes some practice to utilize properly. It pauses the action for a few moments while blocks switch on screen, which can throw off jumps and other precise movements. After an hour, the mechanic becomes natural, as it should; itâ€™s integral to moving around the game, and knowing when to switch is probably more important than any other action.

There are several level types, from straight shot left to right missions to full mazes full of objectives to accomplish. Most of the mechanics come together to make these stages a joy to play and perfect, though not everything falls right into place.

A particular block type, purple ones that launch Wagon in whatever direction they face, are fairly difficult to adjust to, and they require fairly exact timing to utilize properly. This would be fine if there were only one or two near each other, but many missions feature several of these blocks in a massive array that become more confusing than fun to navigate. The stages that featured these, of which there luckily arenâ€™t very many, were my absolute least favorite and I was always relieved whenever they ended. Seriously, these are horrible. Or maybe it’s just me.

The stages without those, on the other hand, are great fun to play, as they emphasized speed, reflexes and planning. Running through, after having played a stage several times, to perfectly complete every objective and get to the goal 10 seconds under par is a rewarding feeling. It was almost like playing a Mega Man game; memorizing jumps and shots down to the pixel to maximize efficiency, but instead of conserving health and ammo, time is whatâ€™s at stake.

MSF:HDEâ€™s animation and sprite work is of the quality expected from WayForward, retaining a cartoon feel without ever becoming distracting. Backgrounds are nicely detailed and help the player and the obstacles become clear to see. The game runs at 60fps, and never dips, ensuring play is always smooth as ever.

The game features some great electronic music, with high and low tempo tracks setting the mood for each puzzle in the game. The tunes are pretty memorable, and I found them getting stuck in my head more often than I had expected.

Fun sound effects, from Wagonâ€™s voice to the sound of switching, round out the audio experience, coming together to create a very cohesive sound that becomes essential to the style of the game.

Aside from the few Iâ€™ve mentioned already, I feel like the last main level is a wasted opportunity. The game never emphasized combat, and then right at the end, it takes away switch control and puts you in a fight. It all feels obligatory, and I think the developers could have come up with a far better way to end the game by utilizing the skills built up during the rest of it. Itâ€™s the same sort of â€œehâ€ that many felt with the first Bioshockâ€™s ending.

After the main game is completed, 5 more stages become available that were originally DLC in the 3DS game. On top of that, finishing those opens up a full remix of the games levels, which offer arranged music and much more difficult platforming. Completing enough stages under par grants access to Patricia Wagonâ€™s original low res sprite, and each stage can be played through again with a more powerful weapon.

Platformer fans should enjoy Mighty Switch Force: Hyper Drive Edition for all it offers, even if some of the mechanics donâ€™t quite work out. Itâ€™s a compact experience that doesnâ€™t spend too much time getting in the way of itself, and its levels are focused enough that replays are always fun. I would definitely recommend getting this one.

Contributor Geron's been into games for as long as he can remember. From fighting Octoroks to studying graphic and game design at GMU, the guy's been around the block when it comes to interactive entertainment. When he's away from a console, he's working on his next piece of art. Fun Fact: his first published artwork was in issue #144 of Nintendo Power Magazine, when he was only 10.
You might also like
indieplatformerPuzzle