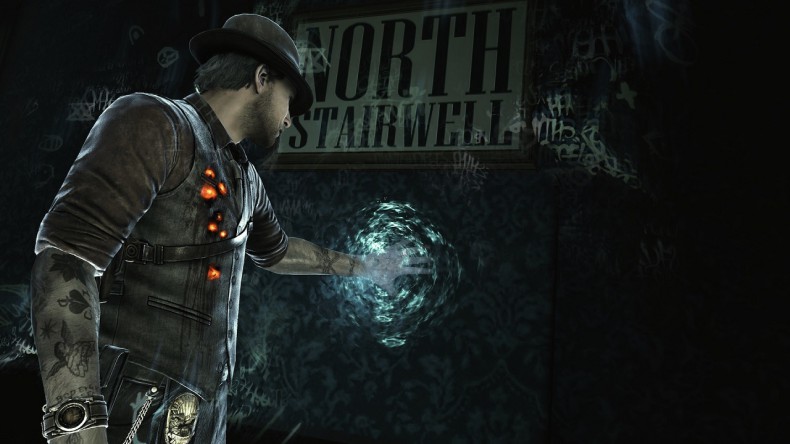 Smart, engaging narrative
Some very memorable side missions
Investigating crime scenes is enjoyable
You get to possess CATS!

Murdered: Soul Suspect is two games combined into one. One of them works and the other doesn't.

Murdered: Soul Suspect  is a weird game. I’m not talking about in the sense that its story is filled with WTF moments, though it has its fair share. I mean it’s STRANGE; peculiar to its very core. I’ve had mixed feelings about plenty of games before, but Soul Suspect  ran my emotions through a high-powered blender. I liked and didn’t like it in pretty equal doses.

I’ll start with the story, which is what the game mainly relies on. Soul Suspect  is a classic ghost story with a twist. It begins with the protagonist, Ronan O’Connor, being thrown from a window and then shot seven times in the chest with his own gun by a disguised assailant. He dies and becomes a ghost. He comes to discover that the person who killed him is the infamous Bell Killer who’s been claiming several lives around Salem, Massachusetts, and then he sets out to discover the killer’s motives and true identity. The plot plays out much like any detective fiction, but also like a horror movie. Ronan is caught in what is essentially purgatory until he can resolve his own murder and find out what else is keeping him from ascending to heaven to join his deceased wife. During his journey he encounters mediums, other ghosts, some of which need his assistance, and demons. I’ll get to all that shortly.

Soul Suspect  is not just interactive fiction like, say, The Walking Dead. Ronan is free to move about Salem and explore the legendary location as he sees fit, but the main gameplay in Soul Suspect  consists of investigating crime scenes. Investigating an area is as simple as wandering around it and picking up clues, a la L.A. Noire. Ronan will then have to use these clues to solve a mystery.

I enjoyed collecting evidence because it made me feel like an actual detective. The problem with these sections is that once all the evidence is gathered, all suggestions of a tough-to-crack case are thrown out the window. It all boils down to Ronan choosing a few clues (I think the most he ever picks is three, and he sometimes gathers almost 20) in order to advance, and it’s hardly rocket science. The solutions are all basically pointed out. And even if Ronan does get an answer wrong, the game never punishes him for doing so. It’s like taking a joy ride in a Lamborghini and then getting stuck in traffic.

My favorite scenes to investigate were the ones in which I had to help out other ghosts. Some of the game’s best storytelling is showcased in these instances. A man was involved in a drunk driving incident and thinks it’s his fault, a girl died from drowning and is confused as to how it happened, and a woman committed suicide after she thought her boyfriend was cheating on her. These moments and a few others are scattered throughout the game and I went out of my way just to hunt them down. They are memorable.

Be sure to also check out Justin “SlasherJPC” Celani’s video review of Murdered: Soul Suspect!

Salem, Massachusetts should be an awesome setting for a video game, but Soul Suspect  squanders its potential there as well. The Salem in it is not very intriguing. Dead-eyed NPCs repeat the same lines while standing still or wandering in set paths. The same character models are used for several of the NPCs and a lot of them even share the exact same voice actors. Rockstar does the same thing with the Grand Theft Auto games, but their money-saving tactics aren’t as noticeable as the ones in Soul Suspect  are. Salem is apparently a lifeless place.

What doesn’t help is the frequent lag that occurs while Ronan is exploring Salem. Soul Suspect  froze completely on me twice. I also had to restart the game once because a clue didn’t show up in one of the crime scenes. That made the fact that prompts are often hard to spot in the crime scenes to begin with worse. The game has a plethora of technical issues going on, some of which could be fixed and some of which players will have to just deal with.

Ronan is sometimes forced into stealth sequences, and they suck. He must sneak around sometimes and take out “demons.” They’re hideous creatures that Ronan can spot through walls. If he can get around behind one of them, he can…make it explode, or something (whatever it is that he does to them isn’t pleasant). If he’s spotted, he must quickly hide inside the remains of other ghosts (I’m not making this stuff up). All these sections are easy and pointless. The demons really have nothing to do with the game’s story and the game would have been better off without their inclusion.

The gameplay that really works in Soul Suspect  lies in Ronan’s ability to possess humans (and the occasional cat) and tamper with environmental objects. For example, if Ronan needs to find out the room number of a hospital patient, he can possess a human who’s sitting at a computer and cause them to look it up (he cannot cause the humans to move in any way; he can only persuade them to do things). If it doesn’t look like Ronan can go any further in an area, there’s probably a vent nearby that a cat can fit in (I don’t know why Ronan can directly control cats but not humans). If Ronan is escorting an NPC through an area and needs to get past some other NPCs, he can cause an object, such as a printer, to malfunction, which distracts the latter. Possessing humans is enjoyable because it lends some more personality to Soul Suspect. I had fun reading their minds, and I delighted in making them do my bidding. Being a poltergeist is also entertaining and I made sure to interact with every object I came across. And OH MAN did I love being a cat!

What really kept me going in Soul Suspect  was the story. Most of the main characters are fantastic, especially a medium named Joy, who is one of the only humans in the game who can actually see Ronan and becomes his sidekick. Ronan himself starts out seeming like he’s going to be an antihero cliche, but his well thought-out background story and his brilliant characterization make him a wonderful protagonist. He made some mistakes in his past, but he’s still a great guy…ghost.

Ronan’s investigation of his own murder leads to more sinister happenings. The plot twists and turns up until its big reveal at the end, which took me off guard. In a game like Soul Suspect, story matters, and it nails its story. It’s bizarre, complicated, and satisfying. Murdered: Soul Suspect  is two games combined into one. One of them works and the other doesn’t. My halfhearted recommendation would actually be a wholehearted one if I based it solely on the game’s narrative, but that’s just not how these review things work. So is Soul Suspect  worth your time overall? I say yes. I actually can’t wait to see what Airtight does next. I just hope it’s a little more focused.

Features Editor Buddy was a journalism major at the University of Alabama. He now spends his days writing novels that will probably never get published and wishing he were an extra in an Anthony Hopkins film. He's been gaming since he can remember and has owned every console from the NES to the TurboGrafx-16 to, yes, even the Phillips CD-i. He loves all games, but his favorite genres are shooters and RPGs. His favorite game is The Legend of Zelda: Ocarina of Time.
You might also like
Airtight GamesGrand Theft AutoMurdered: Soul Suspect