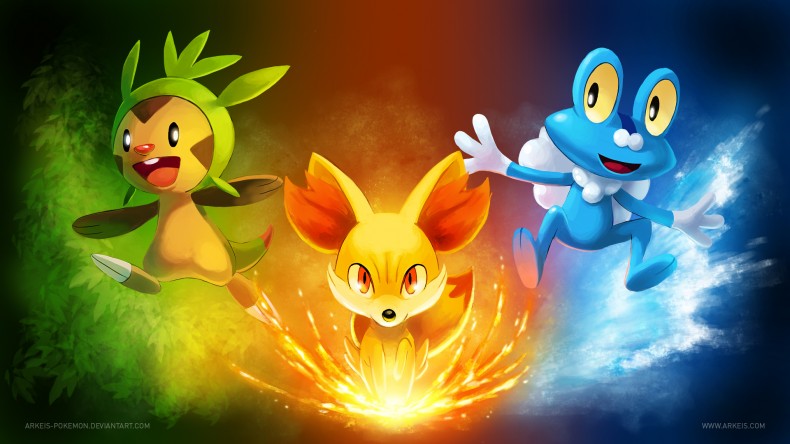 Does a spectacular job at breathing life into pokemon. The art direction we've been waiting to see.

A repetition of a good recipe that came out for the 3DS but wasn't 3D ready.

SpawnFirst recommends you go out and buy the son of gun. While PokÃ©mon X/Y may not reinvent the genre or take any bold leaps; it brings the PokÃ©mon you know and love to life. You donâ€™t have to play with 3D enabled or use the Super Training option for your PokÃ©mon and it may be the same game on a different day, but Iâ€™ll be damned if it isnâ€™t a great game.

Your best friend is back: PokÃ©mon X/Y brings both your favorite pokÃ©mon and new ones to life in this long awaited 3DS title.Â  With refined visuals, a deep level of game play, and a classic feel, PokÃ©mon X/Y is a step in the right direction but a few meters short of everyoneâ€™s expectation.Â  Letâ€™s beginâ€¦

The theme of PokÃ©mon is and forever will be, â€œif it ainâ€™t broken; donâ€™t fix itâ€. The story is the same as all the others. Youâ€™re a young man/woman starting his/her very own PokÃ©mon journey. Youâ€™ll choose a starter PokÃ©mon and head off to become the greatest trainer ever.Â  Youâ€™ll defeat 8 gym leaders, obtain 8 badges, and take on the Elite Four. Instead of a rival (as in past games) youâ€™ll be traveling with friends Shauna, Tierno, and Trevor. All four of you grow together as you explore the world of PokÃ©mon. You are tasked by your town’s professor to research the phenomenon of Mega Evolution. Mega Evolution is a temporary state that occurs only when a PokÃ©monÂ holds a certain stone and is friendly towards its trainer. Team Flare, the antagonists, will get in your way and youâ€™ll get in theirs as you make your way through the Kalos Region. You eventually learn that Team Flare plans to eliminate all human life as a way to ensure that the planet Earth remains in its most pristine state before it is ruined by humanity. Itâ€™s up to you and your friends to stop them from destroying all of civilization while researching Mega Evolution and becoming the greatest PokÃ©monÂ trainer ever.

PokÃ©mon X/Y is a third-person RPG where you get to create your own avatar with pre-set styles. You will begin your journey by choosing between a grass (Chespin), water (Froakie), and fire (Fennekin) type PokÃ©mon (stop me when youâ€™ve heard it before). As you go on your journey you encounter other trainers and wild PokÃ©mon that engage you in battle. These battles will gain you and your PokÃ©mon experience which will level up their stats (e.g. attack, defense, speed).Â  Some PokÃ©mon types are weak to others.Â  For example: the new fairy-type PokÃ©mon are weak to steel-type PokÃ©mon. You can carry up to six different PokÃ©mon with you at any time, so choose wisely. With 18 different types of PokÃ©mon, youâ€™ll have to mix and match your party to be prepared for any fight. The new PokÃ©mon and new fairy-type require a surprising amount of strategy that didnâ€™t seem to exist in previous versions.

Remember when PokÃ©mon were animals and not man-made objects?

PokÃ©mon X/Y uses the dual screen on the 2DS/3DS to meet other gamers, play with your PokÃ©mon (i.e. develop a relationship with them), and enrich your PokÃ©monâ€™s training. This adds a new level to game play where itâ€™s not all about PokÃ©mon battles.

This is (close to) what we have been waiting for since PokÃ©mon Stadium came out in 2000.Â PokÃ©mon X/Y delivers the 3D and movement seen in PokÃ©mon Stadium, bringing the creatures to life.Â  When you go into a battle you no longer see a portrait of the PokÃ©mon but rather a living, breathing 3D model of the creatures getting ready for battle. They squint when they are hit, they get sad when they faint, and they get intense when they attack. Every battle is given a background that is representative of your location e.g. a cave with stalactites, or a grassy meadow. Each move made in battle has a unique animation to go with it. This is a step up from what weâ€™ve seen in previous versions with the jumping 2D models on an oval platform against a black backdrop. I cannot express enough how amazing it is that the PokÃ©mon are living and breathing. Even Pikachu, the unofficial mascot, will say â€œPikaâ€ and â€œPikachuâ€ when in action.

That being said, same goes for your avatar. The sprite which you live through is no longer a giant head with tiny limbs (think Dexter of Dexterâ€™s Lab). You are a full grown human that can be dressed up and styled however the gamer sees fit, no longer just picking a gender. In colder locations you will be able to see your avatarâ€™s breath. When you see water it actually shimmers, grassy plains wave with the wind, and there is detail in everything you see. There is an incredible amount of attention to detail in this game.

The 3D feature is only available during battle and in some locations like caves or warehouses. It does not add too much to the gameplay other than having your PokÃ©mon jump out at you. In fact, Iâ€™d say I played in 2D more often for reasons listed below and the fact that the quality just seemed crisper without the 3D.

The musical composition for PokÃ©mon X/Y gives a great sense of adventure. Every area has its own tune that suits it perfectly. During battle you have you classic â€˜Dunnana Dunnana Dunnana Dun Dun dundunna Dunâ€™ music (you know you understood that) along with a few different songs for special battles. Itâ€™s not anything to write home about, but it is a strong accompaniment to the overall game.

This time around multiplayer is done right. You no longer have to be at a PokÃ©mon Center to trade, battle, or do anything with other players.Â  Thanks to spotpass, you can do that at any point during game play (except mid-battle). You can challenge random players and friends over the internet or locally.Â  You can also trade PokÃ©mon globally by depositing a PokÃ©mon and posting a desired exchange.Â  Others can then browse the PokÃ©mon â€˜for saleâ€™ and trade with those they can â€˜afford.â€™ This is a great feature because you can continue to play the game and check on the Global Trading System to see if your trade has occurred or not.Â  I even got challenged to a PokÃ©mon battle with someone that was on the same train as me. Unfortunately, we got off at separate stops and thus our connection was interrupted. Nonetheless, this implementation is definitely a step in the right direction

PokÃ©mon X/Y only has minor issues that hold it back from true perfection.Â  During gameplay, 3D mode is only possible during battles and certain cut scenes. The pre-determined moments allowing for 3D use isn’t the issue, it’s that the frame rate noticeably slows down. During a battle you will cringe at the frame rate as you move the 3D slider up and down.Â Turning the 3D functionality all the way off does not take away from the game. Though, I was looking forward to the 3D, as this is the first PokÃ©mon game with that capability.

Another issue is the repetitiveness with the franchise overall. This is a personal opinion and I can see both sides to it. I said earlier that â€œif it ainâ€™t broken; donâ€™t fix it,â€ but we have seen this game before. New PokÃ©mon and a new PokÃ©monÂ type don’t hide the fact that this is just a revised copy of an already perfected form. The only difference is the presentation. This is a personal opinion, but I believe other dedicated gamers who have bought PokÃ©mon titles for the past 15 years would agree with me.

Finally, the game is a little on the easy side due to the ability to train your PokÃ©mon outside of battles. Through the PokÃ©mon Super Trainer, you can raise your PokÃ©monâ€™s stats without even leveling them. There is a limit to how much you can do this, but it still gives you an edge in battles that almost ensure a win. Accompanying that are â€œO-Powers” which range from increasing your entire PokÃ©mon partyâ€™s accuracy for 3 minutes, to increasing how much experience they gain from a battle for 3 minutes. These new features just made an already easy game, easier. We all know to switch to our opponent’s weakness for an easy win, do we really need to be 10 levels ahead of them also? We all know Fisherman Jordan is packing only water-types. SpawnFirst recommends you go out and buy the son of gun. While PokÃ©monÂ X/YÂ  may not reinvent the genre or take any bold leaps; it brings the PokÃ©mon you know and love to life. You donâ€™t have to play with 3D enabled or use the Super Training option for your PokÃ©mon and it may be the same game on a different day, but Iâ€™ll be damned if it isnâ€™t a great game.

Versus Mode Co-Host/Creative Co-Director Chris is ridiculous. True story: instead of paying rent one month he bought a Nintendo 3DS. Being a fan of all gaming platforms is tough on his wallet, but he's a gamer on a budget. He plays his PS Vita or 3DS while on the train to/from work and his Xbox 360 or Wii U when at home. He won his university's Video Game Olympics competition back in April of 2012 and mentions it whenever he can in conversation. His other interests include comedy, surviving Chicago, and hangin' out with his pup, Theta.
You might also like
3DSNintendopokemon