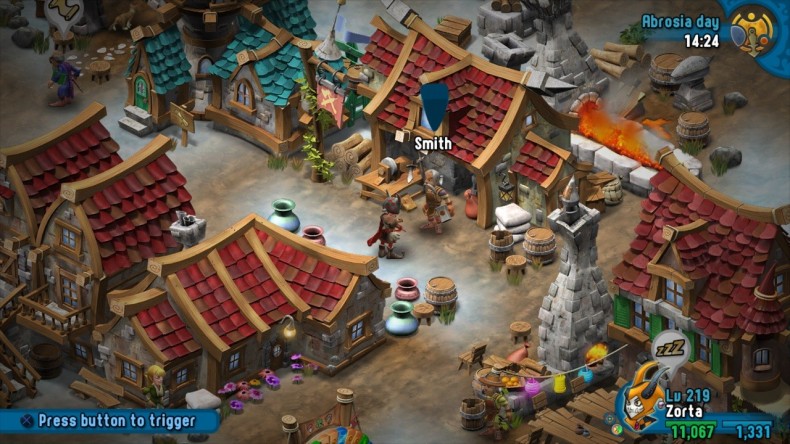 Dungeons are fun and the visuals are detailed. If you choose not to grind away too hard, you'll be in for a solid challenge.

There's a ton of grinding in this game. A lot of it will be spent in battles just to level up. Game feels repetitive after awhile.

It's not a game that will be on everyone's radar, but if you're looking for some mindless entertainment: Rainbow Moon can deliver.

BANG! ZOOM! Straight to the Moon!

Rainbow Moon is a game that has all the right ingredients with wrong proportions. This strategy RPG adds a layer of exploration that can help you build your character, but shallow battle mechanics ultimately undercut the depth of the game. 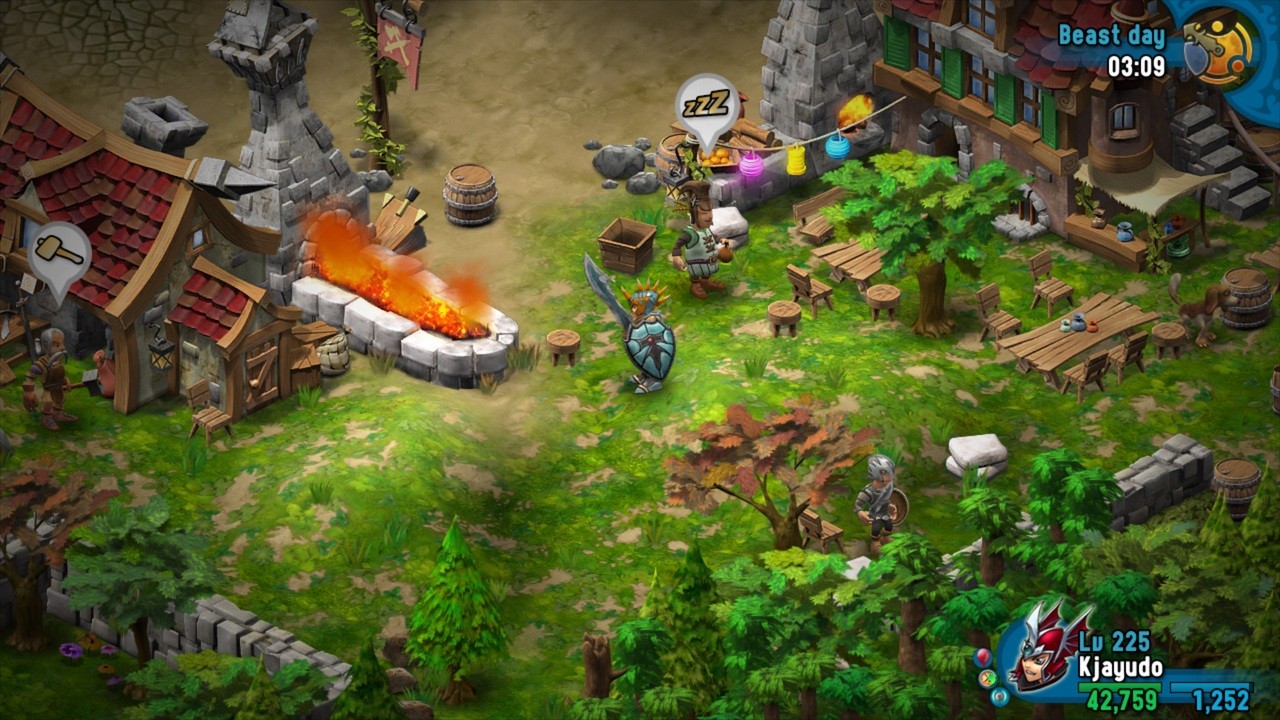 Baldren has been cast through a portal by his arch-nemesis (wonâ€™t say who in case gamers want to be surprised). You wake up to discover that youâ€™re on Rainbow Moon and that it is now being overrun and attacked by monsters which came through the same portal as you did. The residents of Rainbow Moon are suspicious of you since you came through with the monsters. You travel through dungeons slaying monsters and getting the residents to support your quest to set things right and return home.

Rainbow Moon plays like a cross between a Zelda and a Fire Emblem game. You explore dungeons and obtain weapons and abilities as you complete the main quest and side quests. A lot, too much in fact, of the game is grinding. Youâ€™ll need to level up in order to take on monsters as they usually come in groups.

During an encounter with enemies, you enter a battle grid where you move your party and attack in a turn-based system. Depending on your level and speed you may be able to perform multiple commands during your turn, or just one.

Stats are an important part in the game. As you defeat enemies youâ€™ll be rewarded with Rainbow Pearls which are then traded to Savants in order to increase your stats in either strength, hit points, mana, speed, luck, or defense. However, you can max out on these attributes. Youâ€™ll also gain experience which will level your characters up and then allow you to again trade Rainbow Pearls for stat points.

As you explore dungeons youâ€™ll gain gear that youâ€™ll sift through to best equip your party. You can also find scrolls which allow you to learn a special move which will deal more damage and use mana to be executed. 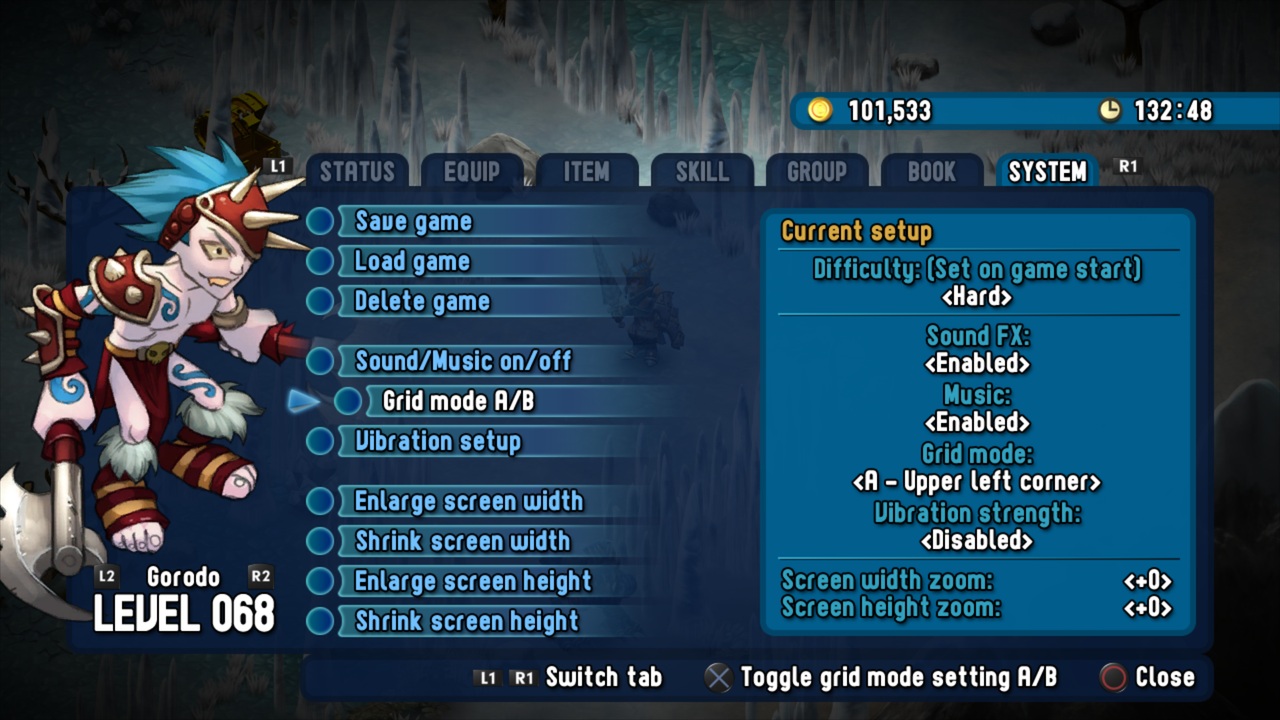 The world of Rainbow Moon is vibrant. The game is on that fine line of colorful but not cartoony. Details in levels will make it really feel like an abandoned mine or a bustling town. The depiction of the environment makes it feel as though this Rainbow Moon really does exist.

The music and sound in Rainbow Moon is nothing to write home about. It fills the void and can be catchy at times. Identical sound bites are used across different characters so a sense of individuality is lost and many enemies are hard to differentiate. This is true for their visual representation also as a fair amount of character models are reused.

The men and women over at EastAsiaSoft Unlimited have a Rainbow Moon website where usersâ€™ data is uploaded and ranked. You can see how far someone has traveled, monsters killed, and more. You wonâ€™t be able to play with someone in the game, but you can compare stats with other games who are also playing.

Rainbow Moon has all the right components for a great adventure game with a strategy RPG mechanic. Unfortunately, thatâ€™s all there is.Â  Equipment didnâ€™t play a major role and the decisions were as basic as which helmet offers more defense. Some offered less defense but gave you more mana, but the game is easily played without ever touching mana.

Along with equipment hunting there is an incredible amount of time spent grinding. The majority of the game is looking for fights so that you can level up. The game boasts 40+ hours of game time because 25 is spent grinding. For example, after completing a dungeon where I was 3 levels above the average enemy, I ventured to the next one where I was suddenly 4 levels below the average. I had to return to the previous dungeon and grind away until I was able to move on. This made for hours of frustration just walking around until an encounter presented itself.

Walking was sometimes also difficult. Although the game was visually pleasing it wasnâ€™t visually logical. A pathway that was clearly large enough to pass through, would be off limits. With no real trail guiding the way through the woods, I often found myself at dead-ends and unable to pass by a tree or rock whose identical twin I passed earlier. It was difficult to know if a path was passable or not as you are able to walk on the beach in some locations but not in all of them. 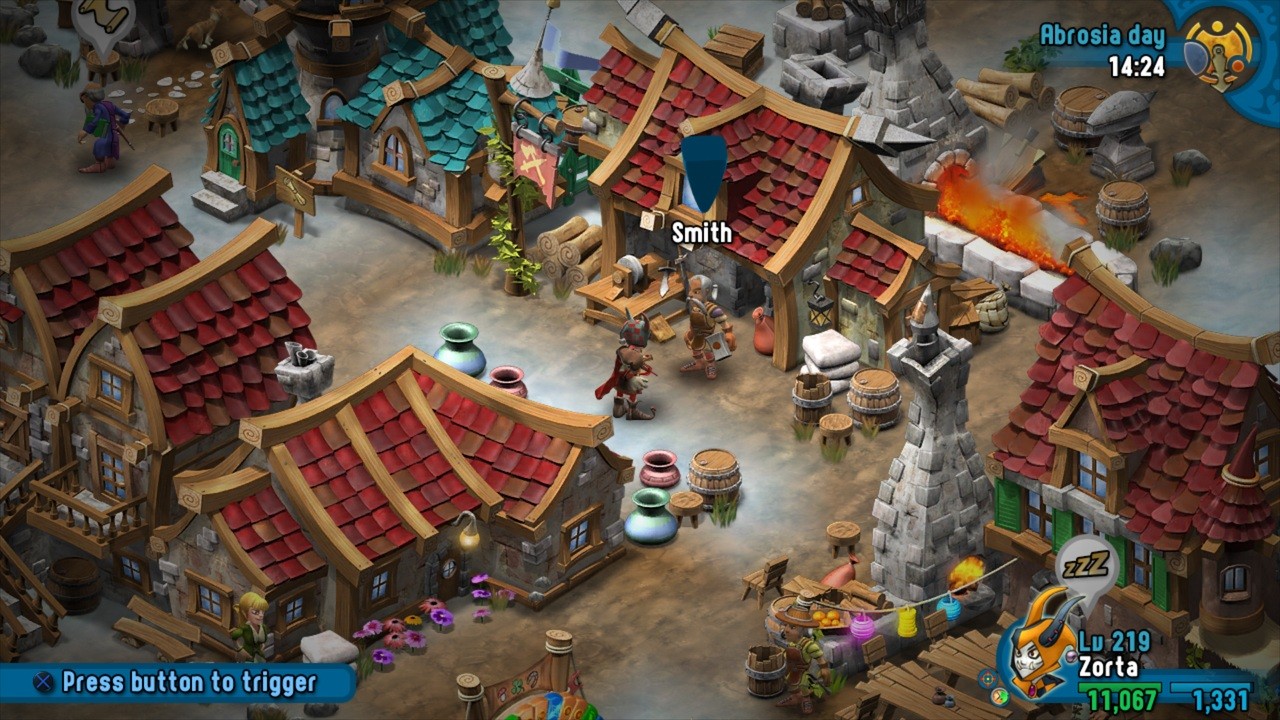 In an industry where multiplayer is becoming just as important as singleplayer, discovering the ranking system was a nice addition.Â  Unfortunately, youâ€™ll see there is someone who is level 999 with 270 hours put into the game and has defeated over 70,000 monsters and youâ€™ll realize thereâ€™s no point in even checking your rank…

Rainbow Moon is nothing you havenâ€™t played before and it doesnâ€™t offer a lot to be explored. The story is dry, the mechanics are shallow and repetitive, and in the end youâ€™ll play it as a chore and not for enjoyment. If you’re a fan of RPG grinding then this is definitely a game for you, but if you hate grinding, but still have a love of RPGs, then there’s still some fun to be had.

Versus Mode Co-Host/Creative Co-Director Chris is ridiculous. True story: instead of paying rent one month he bought a Nintendo 3DS. Being a fan of all gaming platforms is tough on his wallet, but he's a gamer on a budget. He plays his PS Vita or 3DS while on the train to/from work and his Xbox 360 or Wii U when at home. He won his university's Video Game Olympics competition back in April of 2012 and mentions it whenever he can in conversation. His other interests include comedy, surviving Chicago, and hangin' out with his pup, Theta.
You might also like
PlayStation 3PS Vitaps3