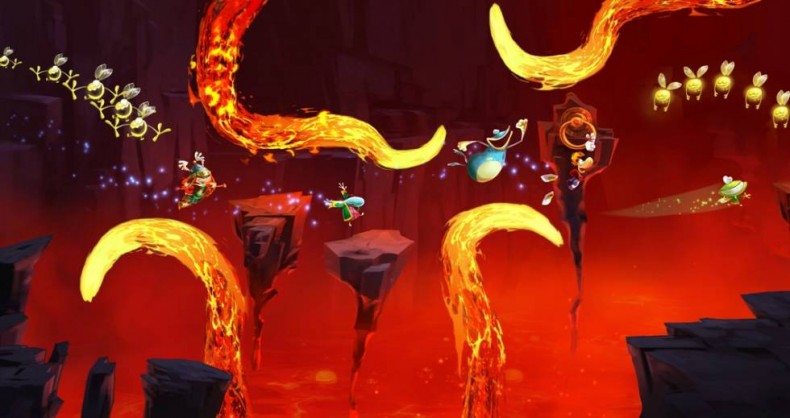 If youâ€™re reading this part in suspense then, we didnâ€™t make ourselves clear enough: Rayman Legends is an amazing ride! If this game had been released sooner the Wii U wouldâ€™ve been whistling a different tune at E3 this year. This is definitely a need-to-have game for any Wii U owner. I recommend you go to your local store and grab yourself a copy. You will not be disappointed.

A Ray of Sunlight

Ubisoft, you have done an amazing thing and itâ€™s called Rayman Legends.Â  The art is magnificent, the sound is energetic, and the levels are creative and challenging.Â  Rayman Legends is Ubisoftâ€™s way of showing off the Wii U.Â  Legends‘ use of the gamepad can show other developers the possibilities of exploring asymmetric gameplay.Â  This is the game New Super Mario Bros. U should have been. If Ubisoft had only kept their faith in the Wii U and released this game back in February, I think the Wii U would be in a much different position – thatâ€™s how fantastic this game is.Â  Letâ€™s get this review finished before I have to stop to go back for more.

Rayman, his good buddy Globox, and the teensies have been catching some major Zzz’s for about a century or so.Â  In that time, the Bubble Dreamer, Polokus, has also been snoozinâ€™ and unfortunately heâ€™s been having some nightmares.Â  As everything he dreams comes into existence, nightmares are no exception and now theyâ€™re invading the Glade of Dreams and attacking and capturing all the good creatures that have been dreamed up.Â  Murfy is sent to wake you and your friends up to take care of the Nightmares whose numbers are getting out of hand. Oh sweet gamepad what light from yonder window breaks. Â Ubisoft should get an award for exploring the asymmetric gameplay that Nintendo has innovated.Â  Rayman Legends plays like a platformer; you have your analog stick for direction, your one button for attack and another one for jump (thereâ€™s a third for sprint but youâ€™ll be holding that one down pretty much all the time). You also have the gamepadâ€™s touchscreen and accelerometer. The learning curve lasts for about the same time of a loading screen: all of three seconds.

After playing Rayman Legends on the Wii U, I canâ€™t imagine playing it on any other console. As you play, youâ€™ll have moments where you tag-team control your hero and Murfy, who helps Globox (an NPC) get through a series of obstacles. During this time, the asymmetric gameplay takes place as you open gates, tickle baddies, and move platforms.

There are also times where you take a wheel to rotate the environment for Globox to navigate safely through. When you rotate the gamepad to rotate the environment, youâ€™ll ask yourself, â€œWhat are gamers on the other consoles doing? Â Because it canâ€™t be as intuitive as this.â€Â  Even when youâ€™re not using the second screen there are bubbles that, when popped, play the game’s theme song, as if everything in the game has a purpose, no matter how trivial. Also, every once in a while a heart will appear in a bubble and if popped your hero will get a heart (extra hit point).

For a slightly different perspective, check out SlasherJPCâ€™s thoughts about the Xbox 360 version of Rayman Legends on his “Infomercial” Video Review of the game, where he scores it a 9.5 out of 10 as well!

The controls are simple and intuitive. If you have any trouble with the controls the game will give hints/reminders when specific controls are required. As a platformer, Rayman is surprisinglyÂ difficultÂ with some challenging levels that I elected to skip because I just could not get through them. Along with the storyline there are also daily, weekly (grand idea: they should change the name to â€œWiiklyâ€) and monthly challenges. These challenges pit you against ghosts of other players to see who can complete the course in a certain amount of time or collect the most lums.

Between the controls, the challenges, and the storyline, you will have a blast playing this game. I find myself laughing and smiling because of the energy in this game. Some levels are timed with the tempo of a selected song and are so much fun youâ€™ll play them two more times just for the heck of it! Earlier I said the art in the game is magnificent and I wasnâ€™t kidding. The character design, the enemies and especially the foreground and background art, are all amazing. The way the levels are designed makes it seem as if you’re in a dream world because the environment is so detailed, colorful, and otherworldly, at times. Some enemies are goofy and some are plain terrifying. Being able to create both within the same artistic direction is laudable. Rayman Legends looks great and captivates completely with its 2D eye candy.

The game’s soundtrack is energetic and is almost hypnotizing. Youâ€™ll want to keep playing for the sole purpose of hearing the music.Â  During the “Rayman Rocks” levels (played in time to selected music) youâ€™ll run through a level where your punches, kicks, and jumps are all in sync with the beat of a drum or the notes of the guitar.Â  Playing through these levels is just a blast. Rayman Legends allows for up to 5 player co-op. You can hop in and out as easily as any arcade-style game. Co-op is a lot of fun however during sprinting sequences it feels more like a piggyback ride as virtually everyone dies except for the one person in front.Â  The 5th player on the gamepad is essentially an escort, but can really help the other 4 players by tickling enemies so that they canâ€™t attack.

There are challenges that score you against others around the world, but there isnâ€™t much to it other than that. There is also a soccer versus mode where you can play with friends in a soccer match. Youâ€™ll fight viciously for control of the soccer ball, trying to hit it into each otherâ€™s elevated goals. With the elevation, thereâ€™s no chance for a straight shot so itâ€™s almost a game of luck as limbs fly around lighting the ball on fire in every direction.

Rayman Legends would be walking away with a perfect ten from me if it werenâ€™t for these tiny, but noticeable, problems.Â  During gameplay, if you pause the game and select something on the menu from the gamepadâ€™s touchscreen, there are moments where it doesn’t register and simply un-pauses (not a word but go with it) the game. Nothing is forcing you to use the touch screen, but when youâ€™re playing as Murfy and the touchscreen is the focus, this hiccup is annoying.

Another issue arises again when playing as Murfy and youâ€™re escorting Globox through the level. Globox would bump into a roadblock I had overlooked, I would go back and move it, and Globox would scratch his butt. This happened on more than one occasion, leading me to believe that if you didnâ€™t pull lever and move boxes before Globox arrives then he wouldnâ€™t continue advancing. With Globox scratching his butt, youâ€™re forced to either restart the level or grab a friend to take control. Having to cater to an unintelligent NPC was enough to break the game’s immersion.

If you grab the Rayman Legends for the Wii U, youâ€™ll see Ubisoft giving a nod to Nintendo with Rayman Plumber and Globox Plumber, where they don the overalls of Mario and Luigi respectively. These were just two outfits out of several for two heroes, but they were enough to make you smile and think, â€œwell I know who Iâ€™ll be playing as…â€ If youâ€™re reading this part in suspense then, we didnâ€™t make ourselves clear enough: Rayman Legends is an amazing ride!Â If this game had been released sooner the Wii U wouldâ€™ve been whistling a different tune at E3 this year. This is definitely a need-to-have game for any Wii U owner. I recommend you go to your local store and grab yourself a copy. You willÂ notÂ be disappointed.

Versus Mode Co-Host/Creative Co-Director Chris is ridiculous. True story: instead of paying rent one month he bought a Nintendo 3DS. Being a fan of all gaming platforms is tough on his wallet, but he's a gamer on a budget. He plays his PS Vita or 3DS while on the train to/from work and his Xbox 360 or Wii U when at home. He won his university's Video Game Olympics competition back in April of 2012 and mentions it whenever he can in conversation. His other interests include comedy, surviving Chicago, and hangin' out with his pup, Theta.
You might also like
NintendoRayman LegendsUbisoft