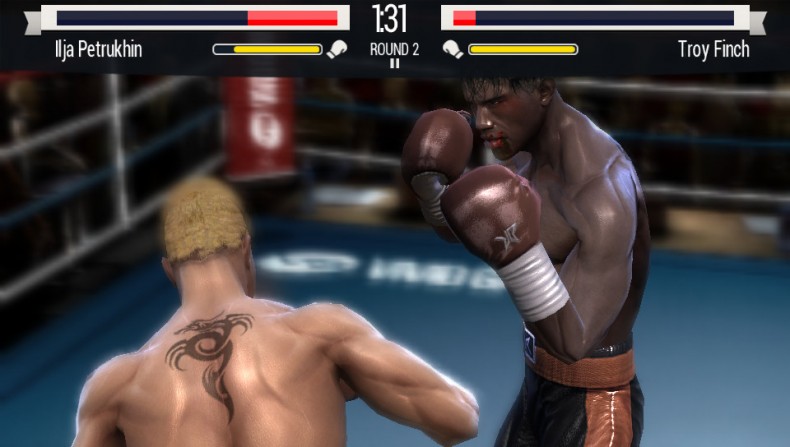 Real Boxing has amazing visuals for a handheld and is exactly what it aims to be. A mobile boxing game.

The game is centered around fighting and yet sometimes punches don't land or go through your opponent. There are a few bugs but nothing that keeps you from enjoying the game.

Real Boxing is modest in its presentation, not boasting anything more than being a time-killing boxing game. It's not perfect, but hey, it's a handheld game for $9.99. Overall it's good quality for the price if you're a boxing fan, but if you're not, you might want to wait for a sale.

Simple is as simple does. With the title â€œReal Boxing,â€ you shouldnâ€™t be expecting a complex storyline or great lore behind the characters. Also if you cut out the â€œRealâ€ part of it, you have yourself a great descriptor of the game, â€œBoxing.â€Â  Letâ€™s begin…

You can play as a pre-determined boxer or create your own unique avatar. From there, youâ€™ll participate in 3 tournaments: Roostersâ€™ Tournament, Night of the Champions, and Boxing Legends. At the end of the Boxing Legends tournament youâ€™ll get the belt, the respect, and all the goodies.

There are two ways to place this game: with the touch screen or with the analog sticks.Â  The action buttons and directional pad are also an option, but more on that later. You choose between jabs, hooks, and uppercuts to diminish your opponentâ€™s health bar while also monitoring your stamina bar. The stamina bar is how much of a punch your punch has (ha!). To refill your stamina bar, you have to back up and let your character rest.Â  You can also dodge an opponentâ€™s swing to refill your stamina immediately and slow down time, allowing you to counter with 3 times the force of a normal swing. If youâ€™re low on health, your options are to avoid getting hit until the round time is up (you get a slight health refill at the beginning of the next round), or you can get close and attempt a clinch. During a clinch, you use the Vitaâ€™s accelerometer to keep a meter in a sweet spot for a moment.Â  If you succeed, you get a life boost, but if not, you just wasted your stamina for nothing.

Each win earns you credits from your sponsors which can be used to purchase stat percentages in stamina, strength, and speed. The better you do in a fight, the more credits you earn. You can also improve your stats by training at the gym when accessible, where participating a series of mini games will earn you 1 percentage point towards a stat of your choosing. Training is crucial, as you will quickly find yourself out-matched in the second tournament without it. However, as an alternative to training (due to limited gym access), you can play any tournament as much as you want to earn as many credits as you like/can.

Real Boxing is powered by Unreal Engine, which provides some surprising detail for a handheld console. The boxers all have realistically defined muscles, and as you fight, cuts and bruises begin to appear on their faces. The audience is a mix between individual NPCs in the foreground and a cardboard mass for the background, which shows the level of effort put into the game.

Real Boxing doesn’t try to wow you with an amazing score or soundtrack.Â  After all, itâ€™s a boxing game, so the audio is primarily comprised of the announcer, the satisfying sounds of punches, and a cheering crowd.

Multiplayer should be bigger than it is for this game. I played a few rounds online and they were much more enjoyable than competing with the computer. Unfortunately, this game doesn’t have a large enough following to guarantee a quick fight. I would wait between 5 to 10 minutes to be matched up most times. Multiplayer played through pretty smoothly and the wait was the only real issue with that mode.

Real Boxing meets the expectations that one would have for a boxing simulator.Â  Nonetheless, there are a few loose screws that need tightening.

It is difficult to consistently land a hit in the game. It may as well be up to the flip of a coin whether you’re going to make direct contact or merely brush your opponentâ€™s cheek gently. There were more than a few times when I threw a full-on haymaker during a match, and it registered as a love tap on the nose.

Also, I ran into an issue during the Night of the Champions tournament, in which a KD resulted in a black screen, and I could hear the announcer counting for the KO, but I couldn’t see anything. Granted, this only happened 3 times throughout my entire playthrough, but it’s a noticeable hiccup.

Another issue worth mentioning is that as you progress from one tournament to the next, the level of difficulty increases dramatically.Â  Thankfully the game allows you to replay past tournaments as many times as you like to earn credits and increase your stats, since gym access is limited. Having to replay past tournaments in order to gain high enough stats to advance makes the game longer than necessary. The game is much more enjoyable while playing a CPU on a similar level to our own, but forcing players to back-track and play previous opponents in order to get to on an even skill level is frustrating and overly time-consuming.

The controls are great for analog, but a little clunky. The Vitaâ€™s small analog sticks made the difference between an uppercut and a hook by about a millimeter. You can opt to play with touch screen controls, but unfortunately this renders all buttons useless, including the L-trigger, which allows you to swing for the abdomen rather than the face. You can also elect to use the D-Pad for your left punches and the action button for your right punches, but youâ€™ll find yourself standing still since you wonâ€™t have your thumb on the analog stick for movement. Therefore, playing analog is the best way to go, as the right thumb stick controls all of your punches, while the left allows you to move around.

Your ankle looks broken…stay down Real Boxing sets out to be a boxing simulator, and it achieves just that. Thereâ€™s no storyline; there isnâ€™t a wombo-combo you can perform; itâ€™s just boxing. Unfortunately it suffers from some rather imprecise controls, selective collision bubbles, and occasional glitches, but overall, it meets expectations for a hand-held boxing game. Overall it’s good quality for the price if you’re a boxing fan, but if you’re not, you might want to wait for a sale.

Versus Mode Co-Host/Creative Co-Director Chris is ridiculous. True story: instead of paying rent one month he bought a Nintendo 3DS. Being a fan of all gaming platforms is tough on his wallet, but he's a gamer on a budget. He plays his PS Vita or 3DS while on the train to/from work and his Xbox 360 or Wii U when at home. He won his university's Video Game Olympics competition back in April of 2012 and mentions it whenever he can in conversation. His other interests include comedy, surviving Chicago, and hangin' out with his pup, Theta.
You might also like
BoxingPSPS Vita