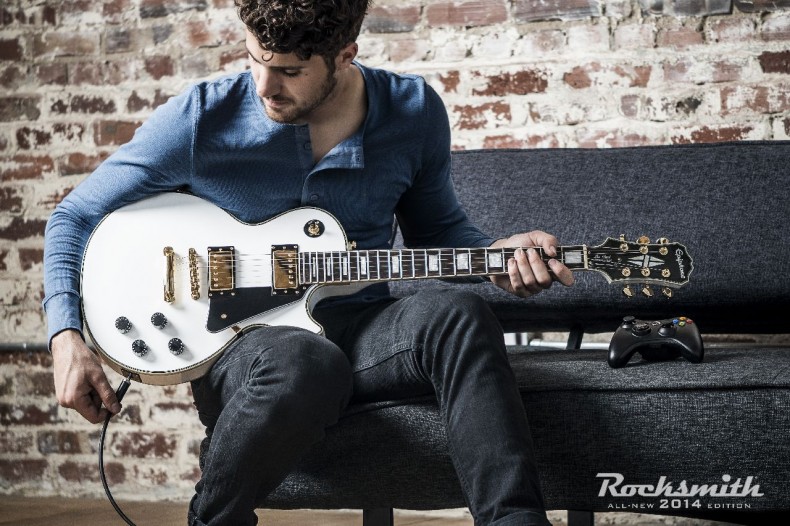 Tons of content, accessible for both beginners and veterans, great list of songs, improved presentation, Session Mode is a unique idea

All guitars styles and bass share the same objectives, string bending still not 100% clear in gameplay,

Rocksmith is back and better than ever. The programming is more efficient, the presentation has been upgraded, and the vast amount of features will keep players glued to their televisions and instruments for hours. The game is perfect for anybody who wants to learn how to play guitar or bass and is just as much fun for veterans as well. Unless you have an amazing stereo system, don't expect the game to substitute a guitar or bass amp. And you may want to brush up on string bending before trying to perfectly play some songs, but these are all minor problems. If Ubisoft keeps the franchise moving like this, it could re-introduce a brand new age for music games.

Well-Deserving of an Encore

Guitar Hero and Rock Band were great games in the music/rhythmÂ  genre which stole countless hours from gamers around the world, however, they only mimicked the feel of playing a real instrument through artificial means.Â  Nothing in the world can replace the feeling of holding a real instrument and learning how to play it; especially not a plastic guitar peripheral.Â  While the first Rocksmith was revolutionary and impressive, it did contain a few design choices and programming flaws which slightly hampered the experience.Â  Luckily, Ubisoft has learned from their previous mistakes to create a superb experience for both veteran and fledgling musicians Rocksmith 2014 is unique not just because players must use either a guitar or bass to play, but because the game shifts from traditional music/rhythm gameplay to educational in an instant without being boring.Â  For players who are just barely learning how to play, there is a lessons mode that teaches both the basics and more advanced techniques.

Lessons usually begin with a video demonstration before testing the player with one or more practice tracks focusing on the technique.Â  Learning to play an instrument requires a hands-on approach and Rocksmith 2014 has it down in spades.Â  The lessons mode is done well, covers just about everything the player will need to be a better guitarist, and is never boring.

The main focus of the game will be the song selection in which players can either learn the song or jump right into a scored mode, much like Guitar Hero, a play the song on various difficulties.Â  While learning the song, Rocksmith 2014 may or may not provide the full layout of the song based on the player’s skill level.Â  If the player consistently plays well, Rocksmith may bump the difficulty up on certain segments.

The game’s programming revolves around the player and for the most part, is really quite smart and accurate at determining a player’s skill.Â  For example, I am experience with both guitar and bass so after leveling up the bass track of Savior to the highest level and choosing the much simpler song Blitzkrieg Bop, I found the song was already set to the highest level.

While I’m not trying to sound like I’m bragging, I’m just saying the game will work with the player.Â  There is a feeling of accomplishment and pride when a player finds out that the game has determined the player can complete a song at the highest difficulty despite never playing it.

For those who are impatient and don’t feel like learning the song bit by bit, the score attack mode allows players to choose a difficulty between easy and hard, and then try to complete the song.Â  The player is scored and failing to successfully play three segments end the song a la Guitar Hero style.Â  Score attack is fun and serves as a test, but if players truly wish to learn the song, they will aim to complete Master Mode which throws out the scrolling tablature and requires the guitarist to play from memory. Aside from Score Attack, Rocksmith 2014 brings back the Guitarcade which features various mini-games based around different techniques.Â  Most of the games are arcade-style in which players aim for the highest score while others could have been full-fledged downloadable titles.Â  Dawn of the Chordead returns and features multiple stages as does the new Scale Warriors.

The mini-games are still as difficult as its predecessors, but just as addicting.Â  Not only are they fun, but the strive to get a better score will enhance a players technique significantly.Â  Dawn of the Chordead, which is essentially House of the Dead with instruments, will both keep players busy and teach them chords.

Unlike the previous game, players are not given a random set of songs to learn and then play in all of them consecutively on a fake stage.Â  Instead, Rocksmith 2014 sets three different mission objectives and sets a path the players can follow.Â  It’s optional, but helps players to experience everything the game has to offer and tell them where they need to improve.Â  The only downside, is all guitar styles and bass share the same path and are connected to one gamer file.

The first Rocksmith was a great game, but it’s presentation and graphics were terrible.Â  Rocksmith 2014 has addressed this issue by issuing a brighter, more varied color scheme and songs are no longer played in front of a room filled with cardboard cutouts of the same four people.Â  To be fair, the background is pointless since the focus of the player will be on the scrolling tablature which is represented by the neck of a virtual guitar.

The updated layout makes it a little easier to read the music, though more complex sections can still be a pain to accurately read at full speed.Â  Top of the line graphics are unnecessary in a music game; sound design is what needs to be focused on.
The musical tracks are authentic and clear while the instructor speaks clearly without speaking too fast; the basic sound design is near flawless.Â  The last game, it could be difficult to hear the sound of the player’s guitar without surround sound or large speakers, but I was able to hear my guitar layer over the track quite well.Â  It is also worth noting the music selection is great and a significant upgrade to the first game’s lineup. Rocksmith 2014 features a session mode which allows players to jam with their instrument alongside an invisible band in the background.Â  Players can choose a specific scale, guitar tone, background instruments, etc.Â  As players rock out, the background band reacts to the player based on what is being played.

This mode serves as a virtual amp and the background band sounds legit, but it is not the same as using a real amplifier, or real band.Â  It is still unique and a great, cheap alternative to buying a real amp, though I’m not sure how good the band is.Â  While I haven’t tested it extensively, I plan to see if it’s possible to reenact real songs, it is still a great way to jam and to get a sense of rhythm.

There is only one issue I have with the series; the interpretation of string bending.Â  In the first game, figuring out the exact step of the bend was vague at best and while the new game includes a decent way of including more dynamic bends, I still have no idea what step the bend is.Â  In paper sheet music, it is written next to the bend symbol, but in the game, it’s either look it up online beforehand or take a leap of faith.Â  This is a little annoying, but it is but a tiny blemish on a glimmering gemstone of a game. Rocksmith is back and better than ever.Â  The programming is more efficient, the presentation has been upgraded, and the vast amount of features will keep players glued to their televisions and instruments for hours.Â  The game is perfect for anybody who wants to learn how to play guitar or bass and is just as much fun for veterans as well.Â  Unless you have an amazing stereo system, don’t expect the game to substitute a guitar or bass amp and you may want to brush up on string bending before trying to perfectly play some songs, but these are minor problems. If Ubisoft keeps the franchise moving, this could be the new age of the music.

Former Contributor Chris West is a graduate of Texas Tech University where he earned his BS in Electronic Media in Communications. Chris has been passionate about games since he was a kid and today prefers games with a strong narrative. He also has a soft spot for horror games, legitimately scary games mind you, and any game claiming to be challenging, Dark Souls for example. When he isn't playing games, he is pursuing his other passions: music and photography. Chris can play both guitar and bass and then take high quality pictures of the performance with his camera. In the end, Chris enjoys writing about his passions and ideas, when he isn't destroying his friends in Call of Duty.
You might also like
MusicreviewRocksmith 2014