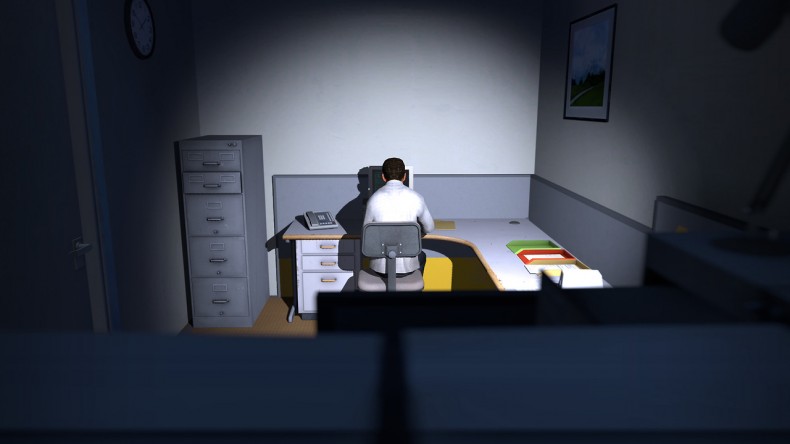 Relatively short, not a game in the usual sense, maybe a little too pricey

The Stanley Parable is beyond description and cannot be pinned down by one single interpretation; it isn't a game per se, it's an experience. While it is an entertaining and often hilarious journey, the $15 price tag may be a little too steep for 2-3 hours of artistic expression, so buyers who are looking for a conventional game should be very wary. Once again, with inevitable Steam sales, like the current Christmas sales, The Stanley Parable is definitely worth a try.

When it comes to video games, I believe a strong narrative to be just as important as the gameplay and that both should complement each other to create an engaging experience. Currently, more games are focusing almost entirely on narrative and story structure, which is fine with me as long as the story is good. Despite my love for a good story, I’ve never truly thought about the philosophies of narratives, writers, the audience, and their complex relationships…until now. The Stanley Parable brings forth a story that not only manages to be thought-provoking and engaging, but also manages to be consistently hilarious in the process. Players take control of Stanley who works in a small office everyday pressing specified buttons on a computer keyboard because he is told to. One day at work, Stanley notices that no orders are being sent down and the entire building is devoid of his coworkers.Â  He also notices that a disembodied voice is narrating his entire day.

As Stanley begins his journey to find his coworkers and find out what is going on, Stanley follows the instructions of the narrator, or he does not. The entire narrative is generally up to the player as the game contains many events and endings. Each of the game’s many events and endings tend to be interesting and generally funny, but they also are vague enough so that the players might have different interpretations on the story.

As I said in the introduction, I felt like the game was presenting the philosophies and contradictions of narrative, especially those of video games. Freedom, choice, fate, destiny, control; these are themes that consistently show up from start to finish, though the game never truly ends.

Even if an ending presents credits, or even abstract credits, it always goes right back to the beginning usually with little or no change to the environment, story, or the narrator’s disposition. It’s kind of like a strange combination of Groundhog Day, Stranger Than Fiction, and Inception…in a way. The Stanley Parable is very difficult to describe as far as games and stories go, but the only definitive description is that it’s a unique experience. The Stanley Parable isn’t a game in the usual sense. Stanley walks using the keyboard and looks around with the mouse, and that’s about it.Â  There isn’t a jump button and there are very few objects to interact with using the mouse left click button; the game is focused entirely on the narrative(s). While it doesn’t really matter, Stanley’s movements are a little slippery, but this is a petty issue since it won’t impede on the game in any way.

The game, which is an HD version of an older mod, uses Valve’s source engine so anyone who has played Portal or Team Fortress 2 should be familiar of the graphical/art style of the game. It’s more familiar than mind-blowing as the current Source engine is starting to show its age due to jagged edges and sketchy textures; it’s still a good graphics engine so this is hardly a problem.

Thanks to the superb performance from Kevan Brighting, the game’s sound design trumps its graphics without breaking a sweat. Most of the game’s personality hinges on the narrator’s voice so it was imperative to get a good voice actor; Brighting was a great choice. There are some music tracks and sound effects which are good, but tend to be eclipsed by the voice acting since the audience’s attention will focus on the narrator during his frequent musings. While the game may repeat itself over and over after every ending, it only take about two to three hours to see everything the game has to offer.Â  Players can add a good 4+ hours if they aim for a certain ending/achievement, I won’t ruin the surprise, but I’m positive most players won’t bother and will instead look it up on YouTube. The other corresponding problem is the game’s relatively short life span may not be worth the price of admission ($14.99), but that’s what Steam sales are for, right? The Stanley Parable is beyond description and cannot be pinned down by one single interpretation; it isn’t a game per se, it’s an experience. While it is an entertaining and often hilarious journey, the $15 price tag may be a little too steep for 2-3 hours of artistic expression, so buyers who are looking for a conventional game should be very wary. Once again, with inevitable Steam sales, like the current Christmas sales, The Stanley Parable is definitely worth a try.

Former Contributor Chris West is a graduate of Texas Tech University where he earned his BS in Electronic Media in Communications. Chris has been passionate about games since he was a kid and today prefers games with a strong narrative. He also has a soft spot for horror games, legitimately scary games mind you, and any game claiming to be challenging, Dark Souls for example. When he isn't playing games, he is pursuing his other passions: music and photography. Chris can play both guitar and bass and then take high quality pictures of the performance with his camera. In the end, Chris enjoys writing about his passions and ideas, when he isn't destroying his friends in Call of Duty.
You might also like
PCreviewSpawnFirst