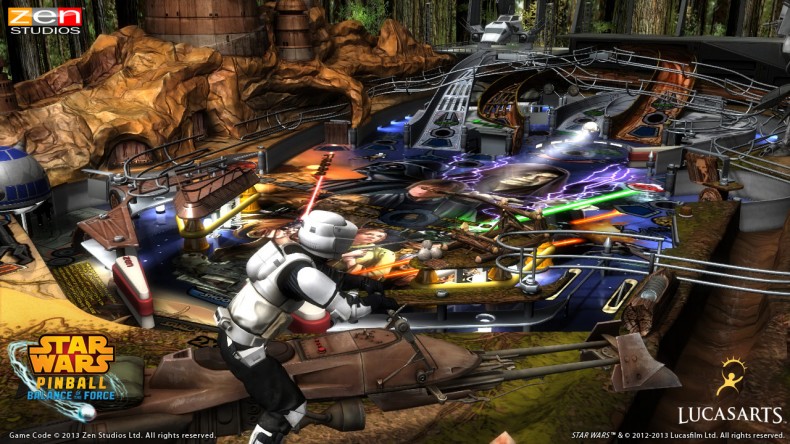 All three of the tables are fun and each of them offers something different; Seeing famous Star Wars moments play out in a pinball game is cool

The Return of the Jedi table is annoying table sometimes; Some of the animations are distracting; The $10 cost is a little pricy for only 3 tables

As it stands, Star Wars Pinball: Balance of the Force is a package that offers a few hours of fun with little payoff. It's something pinball enthusiasts like myself will play a few times in an attempt to beat their high score before moving on to one of the many other experiences Pinball FX 2 has to offer. Still, if you find yourself willing to spend $10 on it, you probably won't be disappointed. Probably.

May the Force Tilt with You

Pinball FX 2 is the best pinball video game ever created. Experiencing all it has to offer is an expensive endeavor, but each of its expansion packs feature something for everyone. The original Star Wars PinballÂ  was the best Pinball FX 2 Â expansion yet, featuring tables that felt wholly different from one another and from any of the previous tables. Now the latest expansion pack, Star Wars Pinball: Balance of the Force,Â  is available for purchase. It isn’t as good as its predecessor, but it’s still thoroughly enjoyable. Balance of the Force features three tables: Return of the Jedi, Darth Vader and Starfighter Assault. Return of the Jedi does the best job a pinball table can do to capture the look and feel of the film it’s based on. The Darth Vader table pays homage to one of the greatest villains of all time. Starfighter Assault is the oddest of the three, allowing players to choose a side (Galactic Empire or Rebel Alliance) and duke it out with the enemy. Each of the tables in Balance of the ForceÂ  offer many ways to score points. Return of the Jedi features several different moments from Star Wars Episode VI.Â  Players must trigger these moments and then perform specific actions if they want to rack up a higher score. Darth Vader is similar, but it’s filled with moments from nearly all the films, and is the most diverse, not to mention best, of the three. Starfighter Assault is the most straightforward table as choosing a side doesn’t really make a difference, but some of its multi-phase missions are just bizarre, like one that activates a Galaga-esque mini-game. Zen has captured the essence of Star WarsÂ  perfectly. The sights and sounds of Balance of the Force all instantly conjure up memories. John Williams’ original music from the films is mixed in with all the pings and dings. Balance of the ForceÂ  isn’t the crispest game in the world or anything, and character animations look a little stilted, but it’s weird that the words “character animations” have to be used in a review of a pinball game at all. It’s a treat to see, for example, Darth Vader and Luke Skywalker engaging in a lightsaber battle over ramp. Zen continues to make pinball look way cooler than it ever could in actuality. The Return of the Jedi table has its fair share of problems, from its overabundance of outlane drains that lead to unavoidable ball losses to its kickbacks that are nearly impossible to activate. It’s still fun, but irritating, and easily the worst table in Balance of the Force.Â  Some of the table animations are trying a little bit too hard to be flashy and actually end up being distracting. I found it tough to concentrate on what I was supposed to be concentrating on at times. Also, I think it’s about time Zen stops putting a $10 price tag on expansion packs that offer a measly three new tables. Pinball FX 2 Â is a little over three years old now, so it’s a little ridiculous to charge so much, especially when Red Dead Redemption, a 20+ hour game, released in 2010 and I can get it for under $10 now. If these three tables carried a price tag of, say, $5 this would be a no-brainer, but they don’t. As it stands, Star Wars Pinball: Balance of the ForceÂ  is a package that offers a few hours of fun with little payoff. It’s something pinball enthusiasts like myself will play a few times in an attempt to beat their high score before moving on to one of the many other experiences Pinball FX 2Â  has to offer. Still, if you find yourself willing to spend $10 on it, you probably won’t be disappointed. Probably.

Features Editor Buddy was a journalism major at the University of Alabama. He now spends his days writing novels that will probably never get published and wishing he were an extra in an Anthony Hopkins film. He's been gaming since he can remember and has owned every console from the NES to the TurboGrafx-16 to, yes, even the Phillips CD-i. He loves all games, but his favorite genres are shooters and RPGs. His favorite game is The Legend of Zelda: Ocarina of Time.
You might also like
pinballStar WarsZen Studios