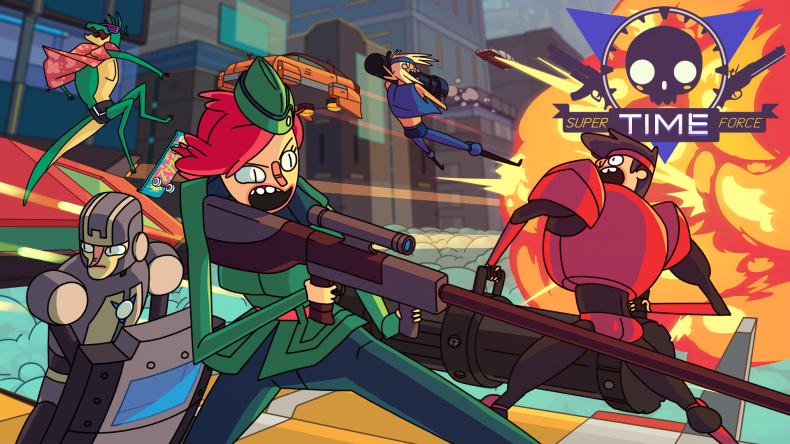 - …but it can get old quickly.
- The game is over rather fast

WIth its hilarious dialogue and fast-paced gameplay, Super Time Force is one of the most fun indie games that I have played in some time. In the end, it does what every video game should and allows the player to just have fun. Even though it's somewhat short, the price of admission is still very much worth it.

“What the Fudge Just Happened?”

Super Time Force  is one of the most ridiculous games I’ve ever played. I was told up front from the developers at Capybara Games that their game was ‘kinda bonkers’, but I still didn’t know what I was getting myself into. Moments into the game, things become clear just how insane the world of Super Time Force  is. Feeling like I had set foot into a classic 80s action movie on crystal meth, I immediately fell in love with everything that was going on.

The game begins with the main character, an eye-patched professor named Repeatski, creating time travel. Mere moments after his invention is completed, the world becomes enslaved by an evil race of robots. It is here that Professor Repeatski is then greeted by the arrival of his future self where he is known as Commander Repeatski and now sports two eye patches. The future Commander Repeatski tells his past self that with the help of the Super Time Force, they will save the Earth. Making sense yet?

After saving the world from robots, Commander Repeatski decides to use time travel to go throughout history and change the past for the betterment of humanity. This includes preventing the sinking of Atlantis for the sole purpose of making it become the fifty-first state in the U.S.A.; recovering the Holy Grail to then sell on the Internet to keep the local “Medieval Funtimez” from going out of business; and stopping the meteor from killing the dinosaurs to create a perfect society where dinos and humans can co-exist. This sort of ridiculousness is what makes Super Time Force  so incredibly charming. The dialogue is outright hysterical and provides one of the funniest gaming experiences I’ve had in recent memory. There’s something to be said about this since the game has no voice acting, and is instead all text based.

While the story is one of the best parts of the game, the gameplay is what stands out as the most unique part of Super Time Force. In each level, you are given thirty lives and sixty seconds to reach the end. The action plays very much like Contra, with bullets flying past you at all times. When you die – and trust me, you will die – you can immediately press the B button to rewind the clock and restart from a point where you hadn’t yet died. In addition to this, your past character that once died continues the same path that it took up until its death. It sounds confusing, but once you get your hands on the game it becomes apparent what is happening. Every time that you rewind you are also allowed to then choose a new character to play. If you are able to collect all of the characters in the game, then you will have the option to switch between sixteen different characters.

Each of the characters has their own unique weapons and abilities, which can each help depending on the situation you are in. The characters also all have a normal attack and a heavy attack. Each of these provides the player the opportunity to mix and match to create some truly crazy combinations. The funniest thing about the characters, however, is the hilarious 80s inspired names that they each have. From Dolphin Lundgren and Melanie Gibson to Jean Rambois and Jef Leppard, it is easy to see where Capybara Games receives their inspiration to create such an outlandish game.

In addition to its insane bullet-hell levels, Super Time Force has some of the best boss fights I’ve seen in awhile. It’s in these fights that the rewind gameplay mechanic truly shines. Using your abilities, you can have dozens of characters on the screen at once firing their various projectiles at the boss. This allows more creative experimentation with the characters, since you aren’t so focused on reaching the end of the level in under sixty seconds but are instead focused on shooting as much as possible to quickly drain the boss’ health bar.

While the gameplay is unique, it only really seems to shine in these boss battles. Throughout the rest of the game it begins to feel clunky and hard to manage. You’ll often rewind only to be immediately killed in a firestorm of bullets. It can be a frustrating gameplay mechanic to get a grip on but also provides a challenge for those who truly want to master it.

That being said, even if you do get annoyed with the gameplay, you don’t have to put up with it for long. The main story only lasts around 2-3 hours, but there are many collectibles to be found in each level for those who want to stick around longer. In addition, you unlock Super Hardcore Mode after initially beating the game in case you want to play it again.

Despite its length, I enjoyed all of my time in Super Time Force. When it’s not leaving you rolling on the floor in laughter, you will be carefully planning out the best way to get through a level without running out of time or lives. For being such a twitchy side scrolling shooter, Super Time Force makes the player think ahead and use their brain to beat it, which is yet another unique feature out of the many that are found in this incredibly weird game. WIth its hilarious dialogue and fast-paced gameplay, Super Time Force is one of the most fun indie games that I have played in some time. In the end, it does what every video game should and allows the player to just have fun. Even though it’s somewhat short, the price of admission is still very much worth it.

Logan is currently a Communications/Journalism at IUPUI in Indianapolis. He is an avid fan of Batman and loves nothing more than sitting down to play a good RPG. He is also a firm believer that every situation in life should somehow involve pizza. One day he hopes to witness the Chicago Cubs win the World Series.
You might also like
indieXbox 360xbox one