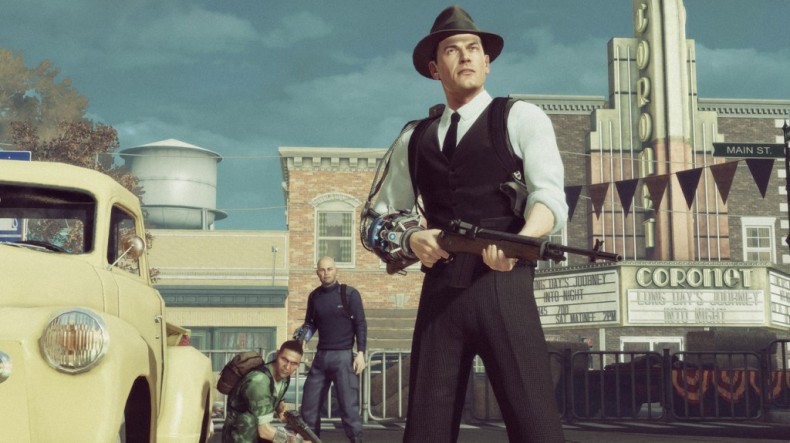 Movements going into/out of cover are a little rigid, bullet spray while aiming is erratic

The Bureau XCOM Declassified has charmed me. I went into the game not expecting much at all, and came out beaming, gunning for another playthrough at a higher difficulty. The story is absorbing and intricate, and will keep you enraptured throughout, but the main star of the show is the squad-based tactical gameplay that just never lets up. Rounding out this excellent game are some exceptional graphics and aesthetics, and a soundtrack that will keep you in an alien-slaughtering mood. For XCOM fans this is a must-buy, and for everyone else, give The Bureau the fair shake that it deserves, even if you have to wait for it to go down in price. You wonâ€™t be disappointed.

A year after the surprise sleeper hit XCOM: Enemy Unknown wowed the RTS and turn-based crowd, the XCOM brand started regaining steam proper. Added to that there was also some development going on a game called initially titled XCOM (later changed to The Bureau: XCOM Declassified, under 2K Marin) making it, at least initially, a first person foray into the XCOM universe, and alien lovers and bashers alike were verklempt with joy.

The Bureau: XCOM Declassified though, unlike its more structured and focused brother, went through stages of developmental issues and stop-gaps. When it finally re-energized with a new tactical 3rd person-based baptism, the hype just seemed to disappear, no matter even if it came into the capable hands of 2K Marin, the developers of the solid 2nd iteration of BioShock. The momentum (and marketing) had just waned. With very little information to go on, gamers lost some interest in the title, and focused on bigger releases and news.

Now that I finally had a chance to sit down and absorb myself in the gameplay and story, I really have to say that The Bureau is actually one of the biggest surprise hits of 2013 for me. It has a solid and absorbing story, great tactical squad-based gameplay, a really good 1960â€™s-vibe-meets-alien-invasion atmosphere, and a very moody and fitting soundtrack. 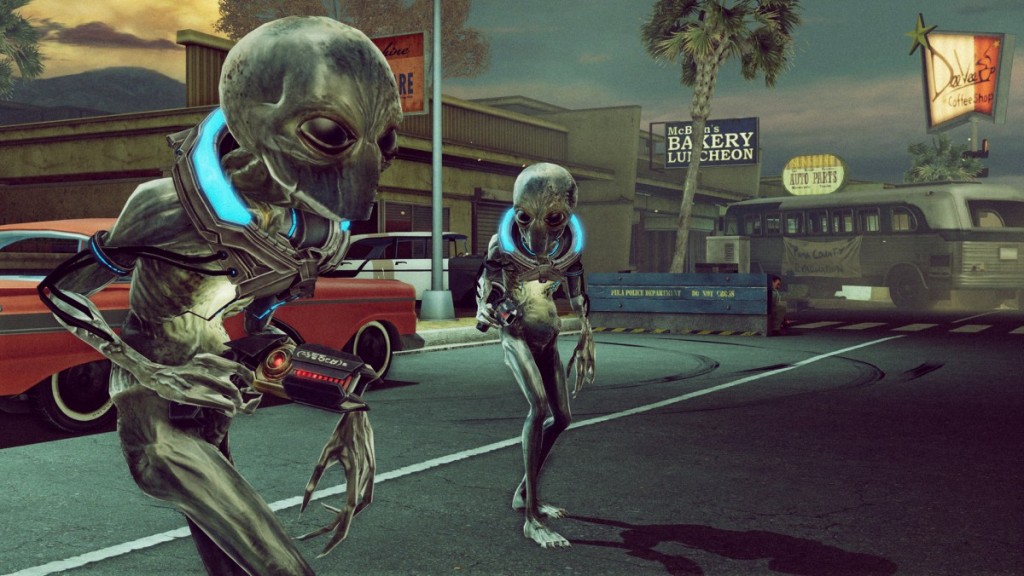 The story and plot in The Bureau are ripe with intrigue, with some interesting twists and turns that kept me captivated from beginning to end. You step in the shoes of Agent Carter; an FBI agent with a loaded past (his wife and child were killed in a freak accident when Carter was away on assignment). Carterâ€™s late 1962 world gets rocked by a very hostile alien invasion (the aliens appropriately named, the â€œOutsidersâ€), and itâ€™s all hands on deck for everyone involved.

The game begins proper when you, as Agent Carter, are waiting for further orders from Director Faulke, to deliver a briefcase containing some mysterious contents to him. Â A female officer comes into Carterâ€™s room and offers to escort him to Director Faulke, and before you know it, her eyes start bleeding black, she shoots Carter, he goes unconscious, she opens the briefcase and BOOM: Carter wakes up fully healed, the possessed ladyâ€™s dead, the suitcase incinerated, and thereâ€™s a full-blown alien invasion outside (WHEW! That was a mouthful). Agent Carter then goes to meet Director Faulke at The Bureau of Operation and Command, also known as XCOM; Â a special organization that was created specifically to deal with the Outsider threat.

From that point on, I was completely hooked. You start working with the XCOM initiative soon after, and go around the US dealing with alien threats, infiltrators, and a profuse amount of missions, both main and side, endeavoring to end the Outsider threat. If youâ€™ve noticed, I havenâ€™t gone too much into the plot, and thatâ€™s because you need to play the game to enjoy the finer points of the story. Iâ€™m not giving anything else away, but be assured that it will not disappoint, especially in the later sections of the game. Considering that you do have to make some major decisions in the story, there are a few possible endings that you can experience, depending on your choices.

Fans of the Mass Effect series of tactical squad gameplay will certainly be pleased by the bevy of strategic options available to them. You, playing as Agent Carter, control two other XCOM agents, through various enemy encounters. By entering into â€œBattle Focus Modeâ€, you slowdown time and can then assign various tasks to each of your agents, and yourself as well. You can have them move to different locations, snipe, throw out healing buffs, shields, taunt enemies, revive squadmates (including yourself), assign specific armor and shield attacks, and many more options. This includes abilities for Carter as well, as we can self-assign tasks as needed when the tactical dial is up. All the abilities have cool-down timers as well, so it becomes very crucial to be able to successfully manage everything, and once you doâ€¦hoo boy.

The best part of the gameplay comes in when you actually exit out from the tactical wheel and watch each of your commands (given to yourself and the squad) play out sequentially one after the other, as if your squadâ€™s a finely tuned and coordinated killing machine. Honestly, the joy that I received from watching my orders being played out in real-time was pure bliss. There is no game in recent memory that gave me such a gameplay high like that, since the last Mass Effect.

Keeping in line with the XCOM series, agents will, and do, die â€“ permanently. Youâ€™ll have to take great care in healing your agents when their health is low, or reviving them when they bleed out, otherwise theyâ€™re gone forever. This would be especially frustrating if you lost a high-ranking agent (level 5 rank), but the game does sort of give the player an escape from this annoyance; you can reload from any previous checkpoint and have your agent back at your side. Hallelujah! 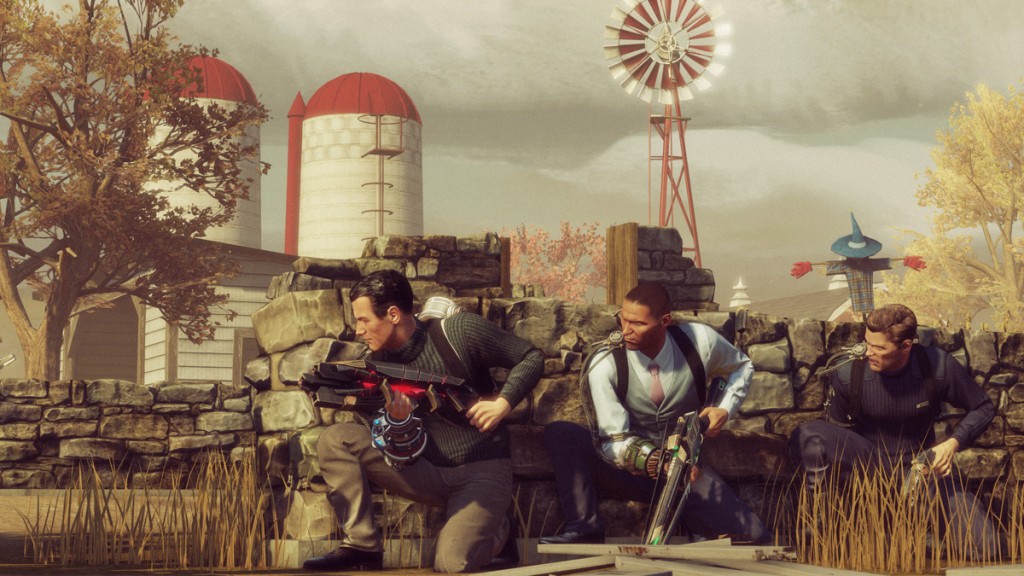 The agents themselves are split between Commando, Engineer, Support, and Recon classes. You can choose different – and quite useful – abilities and perks for each of their ranked levels. Itâ€™s usually a good bet to have complementary classes so that each agentâ€™s abilities work together e.g. one agent strikes with an armor-reducing attack, and your second agent balances it with a critical shot ability (these two attacks together inflict some major damage to enemies, especially armored ones).

Carter and his agents all have customizable earth-based and alien weapons, outfits, and even equipment, like ability modifying backpacks which you can find throughout the campaign and side missions.

The side missions are also pretty engaging, sending you out to retrieve certain alien artifacts, and other such straightforward tasks. There are also field missions, where you can send off your own agents to accomplish quests without your aid, and yes; they rank up too, which I thought was a nice touch.

The encounters with the various classes of Outsiders are enjoyable, especially with the Battle Focus Mode in full effect. You have to use some strategy when confronting the Outsiders; running and gunning will get you and your agents killed. The controls are well done, albeit your gun-spray is a little loose when aiming down the sights, and the controls for going in and out of cover are slightly rough, but straightforward enough that you wonâ€™t have too much trouble, especially during battle situations.

The Bureau just oozes ambiance. From the mild 1960â€™s color palettes, to the Oldsmobile and Rambler look-alikes, toâ€¦well, some things that youâ€™ll just have to see for yourself. One would think that a mixture of the early sixties environments and the exotic technology of the Outsiders would clash, but both spectrums of technology and culture just work.

The characters, aliens, and environments look good, especially so in the later levels, when the scope opens up a bit more. The voice acting is workmanlike, but convincing enough. The soundtrack fits perfectly with the alien invasion theme, and conveys this almost autumn-like mystery with every measure of its various tracks. Each of the melodies and sweeping scores were a joy to listen to and did their part to immerse me completely in the world of The Bureau. 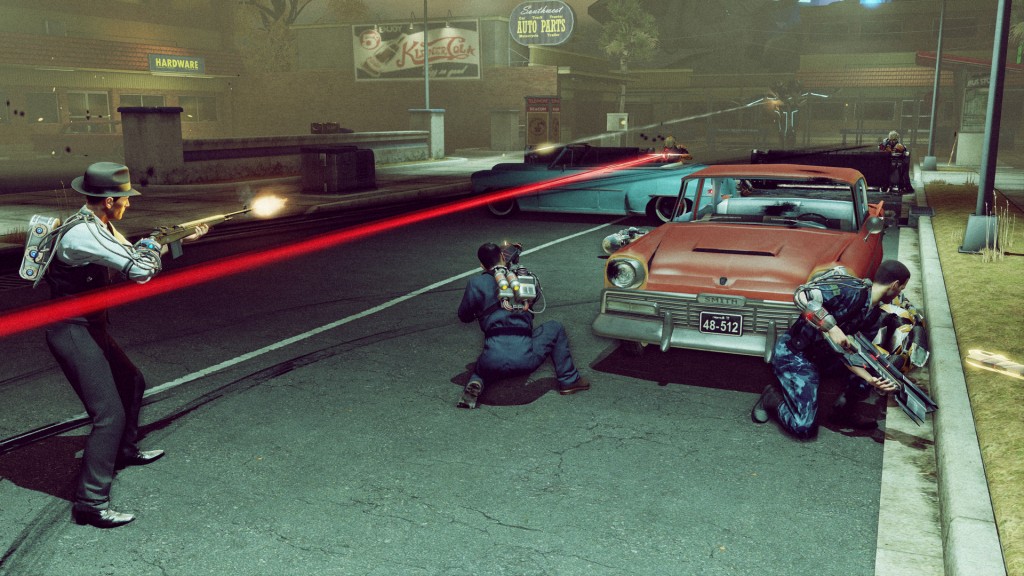 No major issues exist in the game, except for the ever-so-slightly rough cover snap-in controls, and a deviously hard last battle: Pro-tip: make sure that you have your best combination of agents and abilities at your disposal â€“ youâ€™re gonna need it.

Not many extras are included with the game, except for the higher difficulty play-throughs, and some interesting items spread around the game world. These notes, tapes, and other pieces of information give you some insight into the more personal struggles that people were experiencing during the Outsider invasion.

The Bureau XCOM Declassified has charmed me. I went into the game not expecting much at all, and came out beaming, gunning for another playthrough at a higher difficulty. The story is absorbing and intricate, and will keep you enraptured throughout, but the main star of the show is the squad-based tactical gameplay that just never lets up. Rounding out this excellent game are some exceptional graphics and aesthetics, and a soundtrack that will keep you in an alien-slaughtering mood. For XCOM fans this is a must-buy, and for everyone else, give The Bureau the fair shake that it deserves, even if you have to wait for it to go down in price. You wonâ€™t be disappointed.

(Editorâ€™s Note: Itâ€™s a good thing that our The Bureau: XCOM Declassified review was written some time after the initial release day reviews came out. Why? I had time to settle down and read the mostly off-putting commentary about how horrible the game is. Suffice to say, I was somewhat disappointed from reading these reviews that talked about the simplistic graphics, the horrible AI, and how the game was completely unlike the squad-controlled frenzy that XCOM: Enemy Unknown is.

And then I actually had a chance to play the game for myself. If there ever was a disconnect between what the big name reviews were saying, and what the actual gameplay experience was like; The Bureau is a prime example of it. The Bureau: XCOM Declassified is a completely solid and competent squad-based tactical third person shooter, and provides the player with hours of fun and strategic gameplay, and is a great time-piece of the early sixties with an amazing soundtrack and decent graphics to boot.)

For a slightly different perspective, check out SlasherJPCâ€™s thoughts on his The Bureau: XCOM Declassified Video Review, where he scores the game an 8.0 out of 10!
The Lowdown
Badges
PlatformPC, PS3, Xbox 360
Genre3rd Person Shooter, Tactical
Developer2K Marin
Publisher2K Games
RatingMature
Release Date

Founder/Consultant Growing up in different countries, Karam has a unique global perspective about gaming. He brings with him that set of eyes and ears that can look at the state of gaming from afar. His gaming loves cover just about every genre, and he is a constant presence on Xbox Live and PSN. Karam is a Systems Administrator by day and lives in Georgia with his wife and three children. By night he transforms into Aye Karamba (Live) or Aaqiloon (PSN), and his virtual aliases live online.
You might also like
2K Games2K MarinThe Bureau XCom Declassified