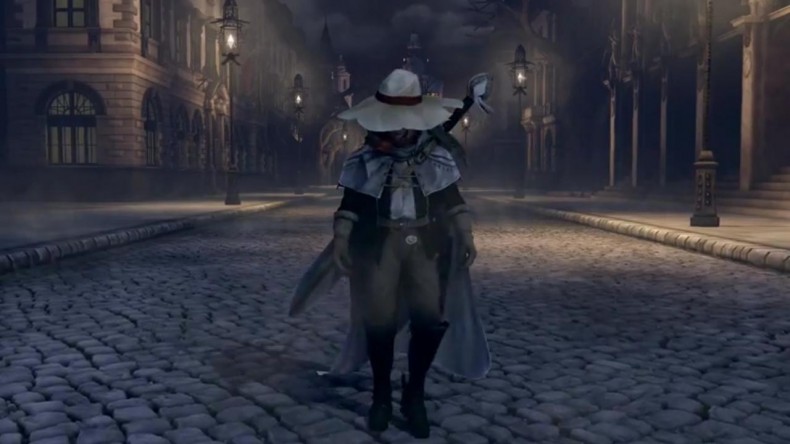 The combat is fast and fun. The graphics look great!

Controls can be hard to pick up; Generic mission objectives

The Incredible Adventures of Van Helsing, is an action-RPG that didnâ€™t try to jump out of the usual bounds of the genre. Itâ€™s fun to hack and slash your way through the game once you understand how to play it, but donâ€™t expect to be foaming at the mouth when it comes to the story behind all the blood and guts. There's plenty to be entertained with about this title, but some issues keep it from being anything other than a Diablo distraction.

The Classic Tale With a Twist

Last year in May, Neocore Games announced an action-RPG project starring the famous vampire slayer, Van Helsing. Well, not Van Helsing specifically, but more appropriately, Van Helsing Junior. It seems as if action-RPGs are few and far in-between besides the popular Diablo titles, so seeing a new entry in the market was nice, but how could it stand against its insanely popular competitor? In short, it can’t, but The Incredible Adventures of Van Helsing does have some redeeming qualities.

Everybody knows the tale of good olâ€™ Dracula. You know, the ominous being who loves to suck blood out of an unsuspecting victims neck? What about the guy that hunted down the original vampire, Sir Abraham Van Helsing? Abraham was Draculaâ€™s tormentor, and was eventually the one to (classic literature spoiler alert) impale and kill Dracula.

But afterwards, what’s left for Abraham to do? Raise a family of course! A son! Sir (enter your name here) Van Helsing! As all good sons, of course Sir Aarc Van Helsing (weâ€™ll call him Aarc, for now) gladly takes over his fatherâ€™s business of monster exterminating. This is how The Incredible Adventures of Van Helsing starts you off, with a brief back story and and an introduction to the gothic, monster ridden land of Borgovia. You create your character, which sadly only included a name change, not total customization, and then youâ€™re thrown into the forests of Borgovia. 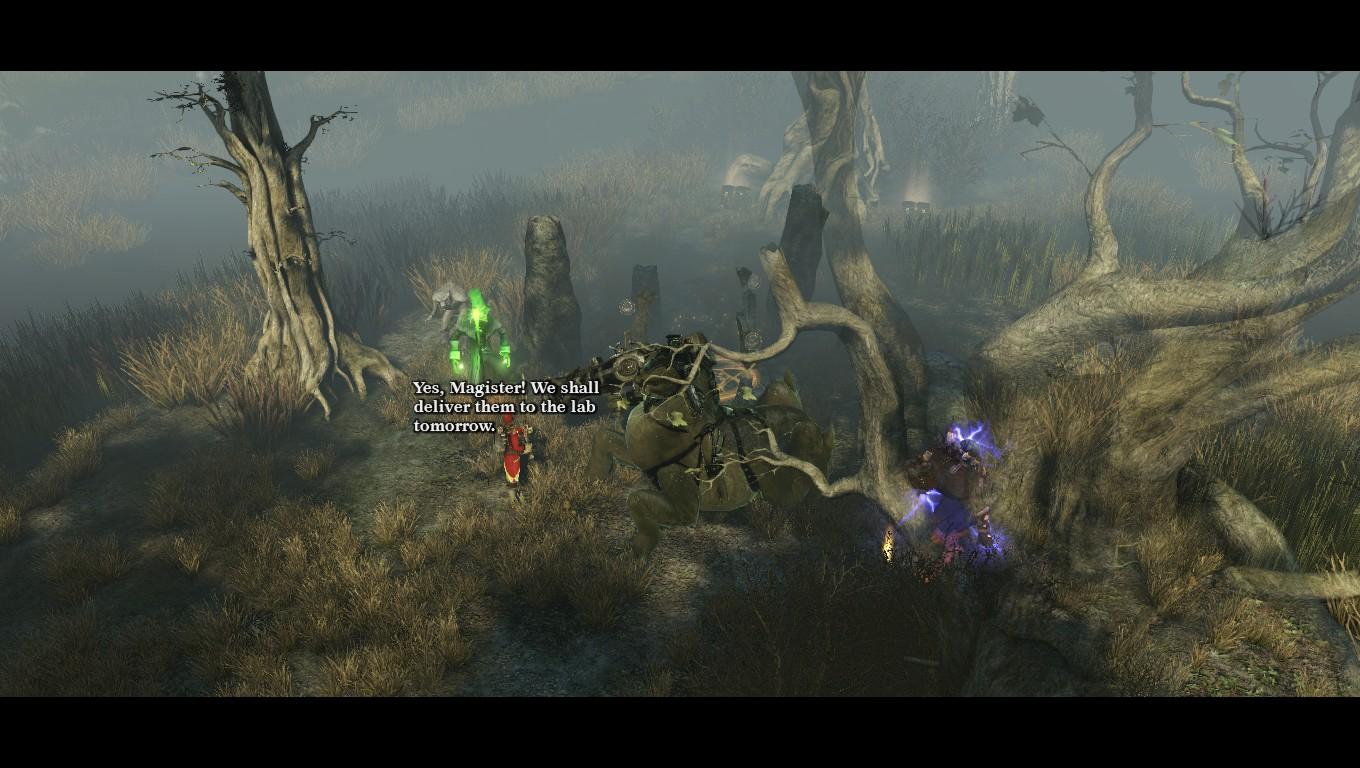 The story is pretty basic and to the point: Youâ€™re to continue in your father Abrahamâ€™s work by going to the capital city of Borgova and exterminating the remaining monsters. You take on quests from the locals, which mostly consists of â€œGo here and kill Xâ€ or â€œKill X and pick up 5 Yâ€. Thereâ€™s nothing really spectacular when it comes to the objectives.

Most of the actual dialog in the game is voice acted, which is really hit or miss. One of my favorite things about the game would have to be the chatter between Van Helsing and his ghostly companion Katarina; the relationship between the two feels very genuine and even made me chuckle or crack a smile quite a few times. 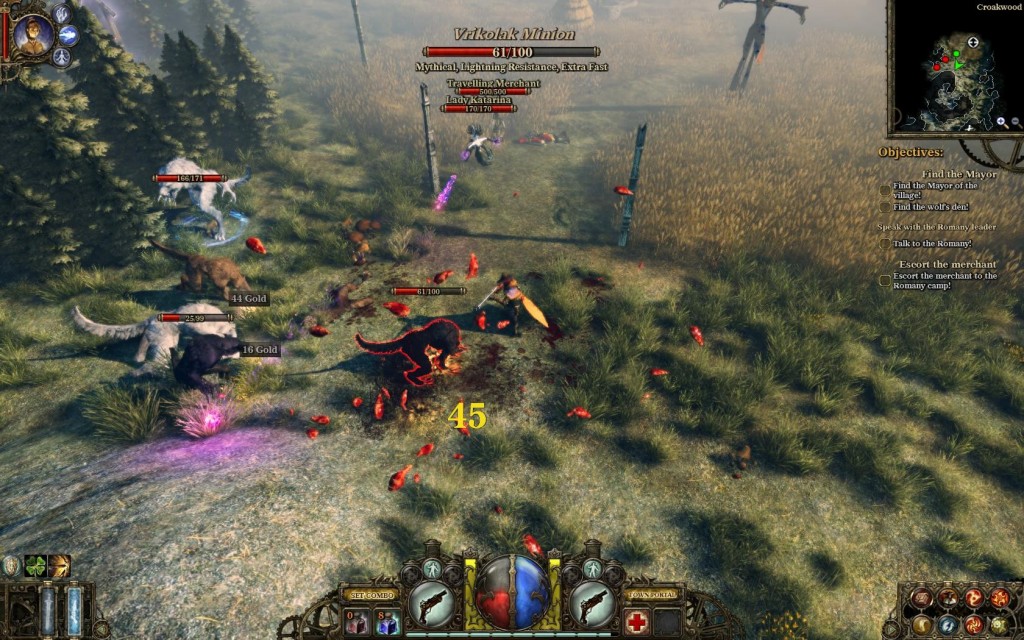 This is where the game shines and also disappoints, The Incredible Adventures of Van Helsing plays like your standard hack and slash RPG, and the leveling system is nothing entirely new. When you level up, you’re given both stat and skill points. Stat points are spent on things like dexterity, willpower and luck, while skill points are spent on, what you’d expectâ€”skills. These range from passive buffs on your character to full fledged abilities. Thereâ€™s two trees to spend your points on (one focused on your sword and the other on your gun) and, while they don’t offer a whole lot of variety, it does allow for some customization.

The gameplay itself is frantic and sometimes a bit intimidating, whereas most times youâ€™re fighting at least 5+ enemies at once, and the combat goes by at a pretty fast rate. This isn’t necessarily a huge problem, but the control scheme can cause problems. Itâ€™s set up to where you can hotkey two different abilities, and theyâ€™re triggered by the left and right mouse buttons. Each of those abilities have three skills accompanying them that are triggered by pressing 1, 2, or 3. The thing is, both abilities’ skills will activate at the same time. At first this was incredibly confusing, but after I got the hang of it, customizing my abilities and using different combos at the same time was actually pretty fun.

The Incredible Adventures of Van Helsing looks like a cross between gothic-noir and a fantasy novel, with huge vistas and colorful forests to dark and dreary castles and towns. Not a whole lot of variety was thrown in, but the game still looks great, even on the lowest settings. The armor and weaponry I found within Borgovia were pretty well detailed, and looked as if a lot of time was put into the creation of such. The game features a pretty solid soundtrack, although most of the sound effects are rather generic. 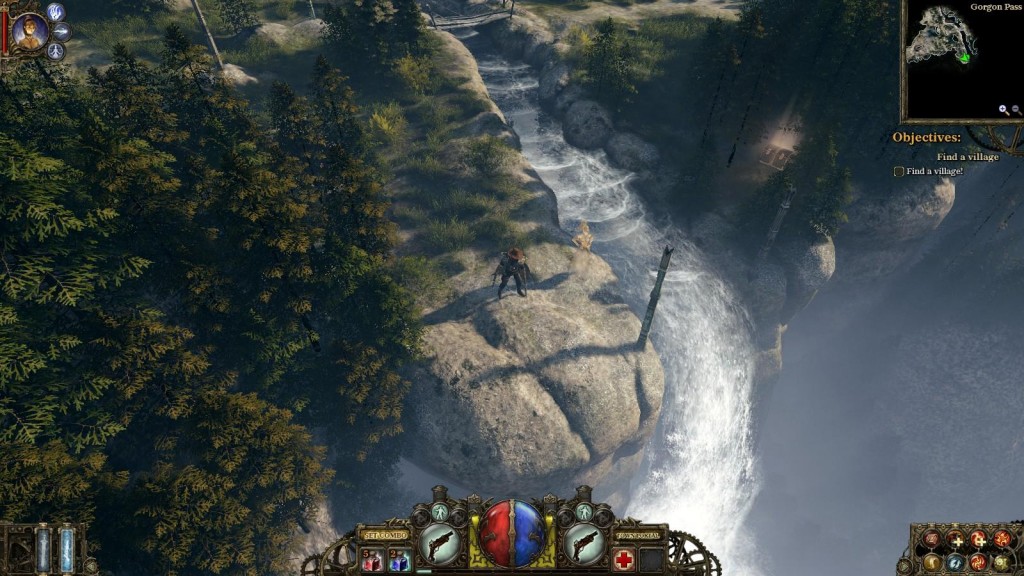 The game can be played through with a friend through online co op, and it plays smoothly with little lag. Thereâ€™s no exclusive multiplayer modes available besides co-op, which is to be expected, and it has you playing the same storyâ€”just with another guy hanging around. It’s still fun, but at the same time it can leave the other person feeling unneeded.

Most of the issues I had with The Incredible Adventures of Van Helsing had to do with both itâ€™s controls and the lack of a real tutorial to show how to use the left and right mouse abilities. Youâ€™re just thrown into the game without any information on how to play it. It even took me awhile to figure how to switch from my gun and sword. The game plays very smoothly after figuring out the tricks of the trade, though. 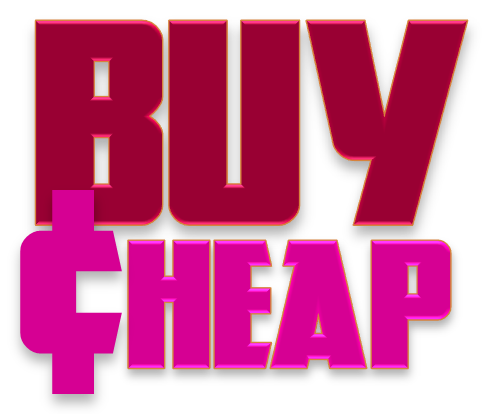 The Incredible Adventures of Van Helsing,Â is an action-RPG that didnâ€™t try to jump out of the usual bounds of the genre. Itâ€™s fun to hack and slash your way through the game once you understand how to play it, but donâ€™t expect to be foaming at the mouth when it comes to the story behind all the blood and guts. There’s plenty to be entertained with about this title, but some issues keep it from being anything other than aÂ DiabloÂ distraction.

Former Staff Writer Alex has been gaming since his mind could comprehend what gaming is, starting with the brutal likes of the Iron Fist Tournament to grinding levels in RPGâ€™s. In his free time he loves to play bass and go on adventures with his dog, Chief. Alex aspires to be a gaming journalist and bring as much as he can to the SpawnFirst table.
You might also like
incredible adventures of van helsingreview

Interview and Contest: The Incredible Adventures of Van Helsing