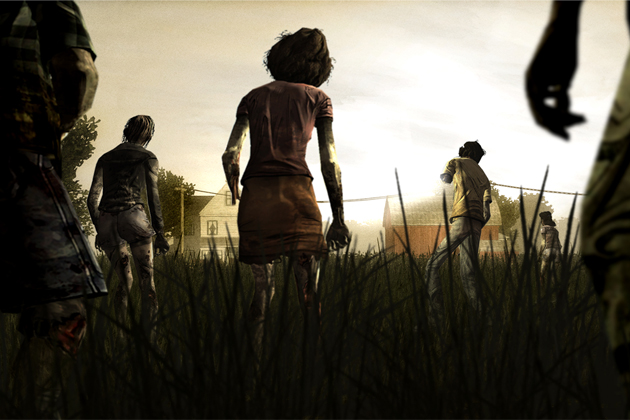 The Walking Dead 400 days overcomes its limitations and does it well. Despite a couple of hiccups that are now synonymous with Telltale games, they donâ€™t detract from the experience and for the short time youâ€™re with the game, you'll enjoy it greatly. While many players wonâ€™t form an attachment like the one they did with Clem and Lee from the first season, players will still enjoy a well told story with interesting characters and themes. 400 days matches the first Walking Dead in terms of quality, and fans of it, or the Walking Dead universe should pick this up. It's one of most unique pieces of DLC to be released and more than deserves a look. It deserves a purchase.

A Great Story Courtesy of a Broken World

Telltale has become renowned for their excellently written and emotional stories, and they have continued this trend with another foray into the Walking Dead universe with a new DLC titled The Walking Dead: 400 Days. 400 Days is an expansion to the very popular The Walking Dead Season 1 game, but relates to the original very little in terms of story. Though it is relatable to the original in how well it tells its story.

Telltale somehow manages to achieve telling five coherent stories within a short span of time. They’re well executed and help show the themes The Walking Dead is known for. Thereâ€™s always the feeling of hopelessness present throughout the experience. 400 Days gives you some clues about the upcoming season 2, although you shouldn’t make that the reason for purchasing this DLC. 400 Days presents us with five enjoyable stories for the bargain price of $4.99; the price alone makes this game worth a purchase.

Tense moments are found throughout the game

This game reiterates the fact that the universe of the Walking Dead is sad and depressing. Within the world of the Walking Dead there are no happy endings, and if one is achieved, it’s usually short-lived. Experiencing this adventure in an interactive form is impressive, and if told by other means, it wouldn’t have achieved the success it has; engrossing players in a way only possible through the involving interaction with the game and its characters.

400 Days is unique. It doesn’t rely on gameplay so much as on telling an engrossing story. Anyone who played the first season will be familiar with the concept and 400 Days does a great job of immersing the player for the entirety of the game. Unfortunately, the stories themselves only span around 15 minutes each. While you will only spend a couple of hours with the game, youâ€™ll enjoy every minute of it. You’ll experience sadness, hopelessness and (rare for a game) anxiety and regret.

400 Days serves as a bridge between Season 1 and the upcoming Season 2 of The Walking Dead. Keep in mind though; it’s not a continuation of the story of Clementine and Lee. The game instead shifts its focus onto five different protagonists, with the player controlling a different survivor for each story. 400 Days reads your season 1 save and even though the ramifications of those choices made in the first season are hard to spot (and quite irrelevant in regards to how the story progresses), it’s nonetheless fun to see some familiar faces, albeit even if it’s for the shortest of times.

Tough decisions are around every corner

400 Days tells five very unique and intertwined stories and all them have one thing in common: a Georgia truckstop known as Gil’s Pit Stop. Throughout the game, I couldn’t help but feel the pit stop played a similar role to one of the diners in Pulp Fiction. The pit stop served as the nexus where the five stories interconnected and where each reached its peak. All the stories are wrapped up within the span of 400 Days (hence the name), and despite being short stories, are still well told and well-paced. The game introduces the player to the characters and instantly starts maturing your relationship with them. This helps to give the player a stake in any of the events involving said characters, making it all the worse when you find out the reason theyâ€™re in danger. Tough decisions are found throughout the entire adventure.
While I did enjoy the characters, I didnâ€™t form the connection with them as I did with the characters in season one. This is where the short playtime hurts and might turn off many. A positive aspect to the reduced game time is that 400 Days is a very undiluted experience; it does what it sets out to do and does it well, with no superfluous aspects.

I came to care for the characters in each of their stories, but not quite on the level of what I felt for Clem or Lee. Even so, one of the best aspects of the game (and the reason why Telltale deserves accolades) is how different each story is and not just a similar retelling of Lee’s journey. Within the span of 30 minutes you can go from a caring sister to a hitchhiker just trying to survive. Most players will enjoy Shell’s story the most, where you’ll notice similarities to season one as Shell tries to protect her sister. The story of Shell and her sister brings a great contrast to Lee and Clementineâ€™s relationship giving a twist to the father-daughter relationship dynamic and applying it to a mother-daughter one. A great aspect of this episode as a whole is how immediately the player is given the choice of which story to play first, as they can be played in any order. It’s a nice touch and doesn’t take away from each story being entwined with the others.

400 Days doesn’t reinvent the wheel and prefers to stick with the tried-and-true formula seen in other Telltale games. This means a third-person adventure that harkens back to older days of point-and-click adventure games. 400 Days contains many of the things found within that genre so expect exploring, making use of items, a few quick-time events, and as per the course in a Telltale game; lots of talking and exposition. 400 Days uses the conversation tree seen in season 1 and in this regard it can seem similar to the RPG genre with clean-cut player choices leading to significant divergences within the story. As with The Walking Dead, comics, shows, and games, donâ€™t expect zombies to be a focal point; come into this game knowing that your interaction with NPCs is often the most enjoyable part (and occasionally the most terrifying). Most of your choices using the conservation tree impact how your character acts, and just as with Lee in season 1, you can have your characters be the â€œgood guyâ€ of the group or the one everyone thinks is a moron. Your character’s actions rely solely on the you and your preferences.

400 Days doesn’t change its art style or improve its graphics from season 1, and retains the comic book look throughout. Perhaps it’s for the best that they didn’t change the style; it works well and conveys the characters’ emotions perfectly. The sound itself isn’t anything to write home about but it does a competent job of keeping the player in the moment. Voice acting throughout is superb and up to the standard expected of a AAA release and really helps to immerse and connect the player with the characters and their world.

Issues that plagued Season 1 remain unfixed, such as the game slowing to a crawl while it processes certain actions and screen freezes while translating to the next. I havenâ€™t run into any save issues and hopefully others donâ€™t. I’m mentioning this as the first season suffered from lost saves that angered many a gamer.

No real extras exist within 400 days; a majority of what you get from the game comes as a result of playing through the story.

The Walking Dead 400 days overcomes its limitations and does it well. Despite a couple of hiccups that are now synonymous with Telltale games, they donâ€™t detract from the experience and for the short time youâ€™re with the game, you’ll enjoy it greatly. While many players wonâ€™t form an attachment like the one they did with Clem and Lee from the first season, players will still enjoy a well told story with interesting characters and themes. 400 days matches the first Walking Dead in terms of quality, and fans of it, or the Walking Dead universe should pick this up. It’s one of most unique pieces of DLC to be released and more than deserves a look. It deserves a purchase.

Former Staff Writer Alice is a novelist, Shakespearean actress, and gamer who once survived emergency surgery in Bangladesh, but still finds most video games more exciting. She still has recurring nightmares about Uninvited (from 1986) thanks to an early childhood playing games on an ancient Mac. She's played Mass Effect more times than most people should own up to and is eagerly awaiting her very own episode of Intervention, which will likely be the Best. Episode. Ever. She also occasionally speaks German, but only when it's most inappropriate.
You might also like
ClementineDLCreview