The Walking Dead Season 2: All That Remains Review 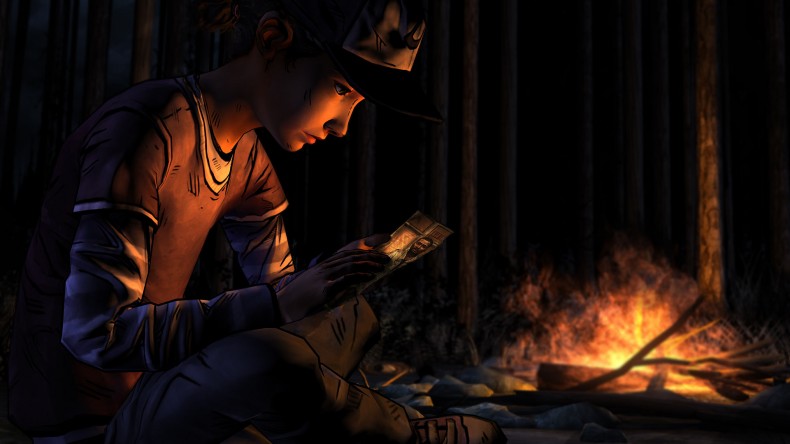 Another awesome entry in TTG's TWD series, carrying on where Lee left off as Clementine takes on the walker-fighting mantle. A little scary, a lot emotional.

A little slow, a little short.

Pick up the whole season pass-- if Season 1 means anything, Season 2 will be an emotional doozy.

TellTale Games returns with season 2 of the superlative The Walking Dead game, shaking its choice-based moneymaker for all that itâ€™s worth. Itâ€™s an emotional, occasionally scary, occasionally slow entry in what will likely be an exciting season.

You begin the story as Clementine, the young girl The Walking Dead Season 1â€™s player-character Lee found and then sought to protect as best he could throughout the course of the season. Sheâ€™s a little older (though barely), a little tougher, perhaps a little wiser, and sheâ€™s joined up with Omid and a very pregnant Christa (all that speculation apparently dead-on), but for various reasons she finds herself alone in the woods, looking for food, shelter, and the general accoutrements of the zombie apocalypse. Itâ€™s best to avoid any spoilers at all for a game like this, but as you can imagine, she soon finds other people, trouble, andâ€” walkers.

It carries on the themes from the first season (and its namesake, Robert Kirkmanâ€™s graphic novels): people are sort of awful, though occasionally kind, and that they are the true threat in a zombie apocalypse, not the zombies themselves.

If youâ€™re looking for return characters from Season 1, itâ€™s probably best to remind yourself that most of them are dead (spoiler alert?)â€” this story is now Clementineâ€™s. The game can be started from a previous save file, whether youâ€™ve played through TWD Season 1 and/or the 400 Days DLC. If not, the game warns you, it will randomly choose for you.Â  Iâ€™ll be honest, I meant to replay Season 1 before I began Season 2 and never got to it, but the game will helpfully review your major choices for you in a dramatic PREVIOUSLY ON cutsceneâ€” at least the ones that seem to immediately impact your particular play through.

At its heart, The Walking Dead is an interactive story, which is not to be confused with not being a game. It retains the elements of TellTaleâ€™s LucasArts backgroundâ€” the gathering of items to occasionally combine them, but itâ€™s mostly about the way people communicate with each other, the silences in conversations, and the things people do and do not say.Â  TTG games are also about choice, and the familiar text box in the top corner stays the same, though itâ€™s still often hard to tell what will have resonance and what wonâ€™t, and even a subtle, â€œSheâ€™ll remember that,â€ in the corner might mean very little game-wise except to taunt your conscience. TTG has made very few changes to the gameplay of the first season, with a few notable examples: in some combat sequences thereâ€™s now a massive red arrow to prompt you to move quickly in one direction or another (Quantic Dream-style). Itâ€™s slightly exhilarating and not an unwelcome change to the first game. The occasional quicktime events are there too, but except for moments when youâ€™re like me and the E-key is suddenly elusive, none of these are distracting or even all that notable. The map is a little clunky in terms of moving around (like youâ€™ll want to know why that particular patch of grass is so box-shaped and why you canâ€™t angle your way around it), but nobodyâ€™s coming to this game for parkour.

It looks great and it sounds great, and itâ€™s really the superb voice acting that makes TellTaleâ€™s dialogue sing. Melissa Hutchison returns as Clementine, and sheâ€™s suitably older and harder-sounding. (As a side note, she’s also an incredibly awesome person, so if you see (stalk?) her like I might have done at Dragon Con 2013, try to stop and say hi to her.)Â  The rest of the cast is great too and goes a long way in selling the fact that while people in a zombie apocalypse might be awful, theyâ€™re still people. The graphics echo the ones in Kirkmanâ€™s graphic novels, but the game seems to draw inspiration from those rather than using them as a guide.

So, look, itâ€™s hard for me to find fault with a TellTale game. If anything, and this is nitpicky, itâ€™s that the transition from Lee to Clementine as a player character doesnâ€™t feel completely organic. If you played the first season, youâ€™re trained, conditioned, to protect Clementine from the things around her, so transitioning to making her decisions for her can feel at times a little forced. Her dialogue occasionally waivers between stoic and bratty, neither of which carry the same emotional resonance as they did when an 8-year-old looks up at you, a convicted killer, and offers you her trust. That said, the weaknesses in â€œAll That Remainsâ€ are only evident when compared to the episodes that preceded it. TTGâ€™s writing is, as always, superlative, and itâ€™s likely not wishful thinking that Season 2 will reach the emotional crescendo its predecessor did.Â  It took the TV show all freaking season 2 to figure out where Sophia was, didnâ€™t it? A friend of mine texted me the night this came out and said, â€œIâ€™m really worried about the dog,â€ and to some degree I wasnâ€™t.Â  I knew what was going to happen to the dog, and you will tooâ€” because itâ€™s that kind of a game, and TTG wants to pull all of those heartstrings in the right and wrong places.Â  It will feel occasionally obvious, but donâ€™t worry, thereâ€™s probably something worse around the next corner.

It also relies incredibly heavily on some of the goodwill the first season bought; the emotional resonance of very early scenes depended upon caring about a couple of characters from the previous season. I, for one, was devastated when the kind of thing that happens in a zombie apocalypse happens (people die), but my cynical dog-minded friend up there couldnâ€™t have cared less. It also really relies on your willingness and desire to take Clementine into your own hands, literally. You’re probably okay if you haven’t played season 2, but it’s probably a little like coming into season 2 of a tense dramatic TV show– there are simply going to be emotional beats you won’t get.

So, see? Nitpicky. The Walking Dead is a superlative game, though likely it will be greater than the sum of its partsâ€” in the end.

The biggest, and smartest thing, that TellTale has done for its games, beginning with The Walking Dead Season 1Â and continuing in their Fables adaptation, The Wolf Among Us, is provide a breakdown of the choices that you make versus what everyone else has made.Â  This has the fascinating outcome of almost forcing you into wanting to play again. And you willâ€” because the stark numbers of what you did and did not choose have the startling effect of emphasizing how easy it would have been to make the other choiceâ€¦and how many other people did.Â  (As a side note, at GDC2013 TellTaleâ€™s former writers Sean Vanaman and Jake Rodkin talked about the choice of Doug Vs. Carley from TWD Season 1.Â  75% of people saved one, 25% of people saved the otherâ€” a problem, in TTGâ€™s minds. So they sought to create environments in which the choices were more evenly split, showing a true divide in player consensus. Those choices seem less polarizing in â€œAll That Remainsâ€, but itâ€™s still fun to see.) Yeah, I mean, absolutely.Â  Pick up the season pass while youâ€™re at it. These are games that reward patience and replays, and their longevity is significant. â€œAll That Remainsâ€ will feel a little like a prologue or a mid-season teaser for a show youâ€™ve been waiting for a long time to come back on. Letâ€™s hope TTG gets episode 2 out soon.Â  And in the meantime?Â  You can explore all those other choices you didnâ€™t make.

Former Staff Writer Alice is a novelist, Shakespearean actress, and gamer who once survived emergency surgery in Bangladesh, but still finds most video games more exciting. She still has recurring nightmares about Uninvited (from 1986) thanks to an early childhood playing games on an ancient Mac. She's played Mass Effect more times than most people should own up to and is eagerly awaiting her very own episode of Intervention, which will likely be the Best. Episode. Ever. She also occasionally speaks German, but only when it's most inappropriate.
You might also like
Clementineps3TellTale Games