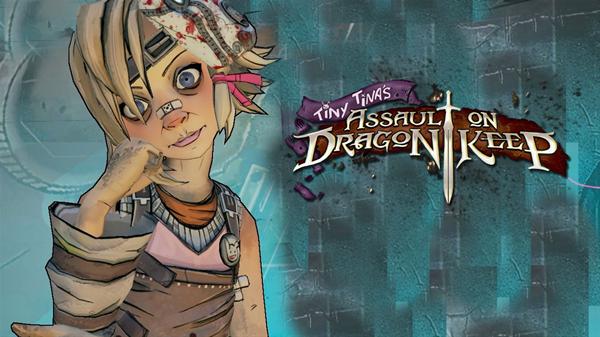 Tiny Tinaâ€™s Assault on Dragon Keep is a damn near perfect DLC, and a great way to send off Borderlands 2. I legitimately canâ€™t wait to play it again to see if I missed any references or loot along the way. If youâ€™re a Borderlands 2 fan, this is absolutely a must-buy (also get Mr. Torgueâ€™s Campaign of Carnage, because itâ€™s almost as hilarious as this one).

Iâ€™ve been on a huge Borderlands 2 kick as of late, playing through the campaign five times in the past month, as well as playing all the DLCs. I guess you can say I was doing it to get ready for the gameâ€™s final DLC: Tiny Tinaâ€™s Assault on Dragon Keep. With all that buildup and anticipation, I was a little worried that I set my expectations WAY too high for this final DLC installment in the Borderlands 2 saga. I am pleased to say that Tina Tinaâ€™s Assault on Dragon Keep surpassed my expectations, and might arguably be the best Borderlands DLC ever. 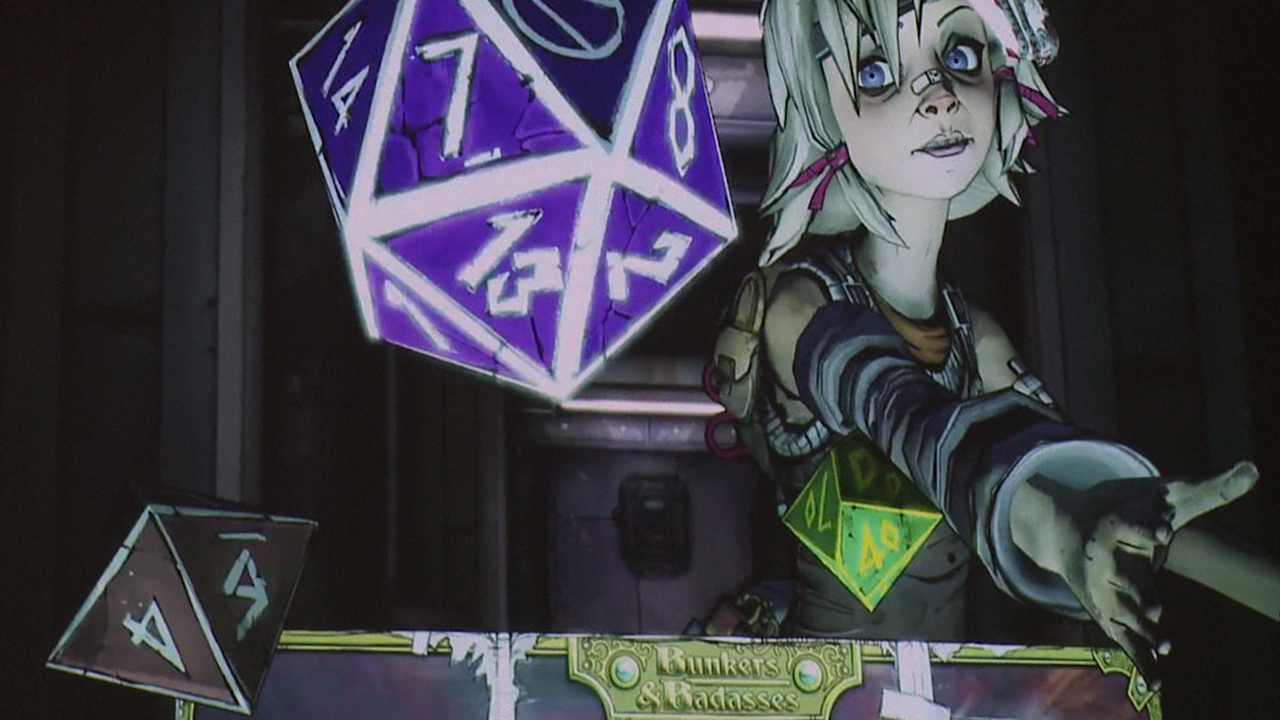 Much like the main game, Tiny Tinaâ€™s is very well written, finding the perfect balance of humor with the occasional heartfelt moments. The story follows Brick, Lilith, and Mordecai as they play Bunkers and Badasses (a Dungeons-and-Dragons-like game) with Tiny Tina. I donâ€™t want to go much farther into the story than that, but all I will say is that the â€œquestâ€ that Tina makes up involves you freeing a kidnapped queen from an evil sorcerer. Now I know that sounds like a pretty generic plot for a quest but thatâ€™s the whole point of the DLC: itâ€™s supposed to be cheesy. The purpose of Assault on Dragon Keep is to comment and poke fun at nerd culture as a whole. Whether it be rolling 10-sided die to get better loot or the multiple references to Game of Thrones and Lord of the Rings, the most amusing part of the DLC is not the plot as a whole, but the little things that make it so great. I found myself bursting with laughter whenever there was a pop-culture reference that was cleverly and subtly (or not subtly) mentioned in the game, and trust me, there are a LOT of references. I donâ€™t want to mention any here though, because I donâ€™t want to ruin it for the rest of you since finding them on your own is the best part.

At its core, Tiny Tinaâ€™s runs just like Borderlands 2; youâ€™re still running around doing crazy side quests and looking for the best loot to more easily dispose of your enemies. Where the DLC truly shines is in all of its new content. It features a dozen new enemy types, which are more than all the previous DLCs combined, and unlike the previous DLCs, they arenâ€™t re-skins. All the new enemies are redesigned from the ground up and pose unique challenges that havenâ€™t been seen before in Borderlands universe.

One of my favorite features of the game is how the story is told. Since Tiny Tina is making up the story as she goes, she will randomly adjust the environment to her wishes. For example, at the very beginning of the game, she pits you against a dragon that you cannot damage at all and it immediately downs you. Lilith points out that itâ€™s unfair to fight an enemy you can beat so early, so Tina agrees, the dragon disappears, and your player is revived. Tinaâ€™s input is hilarious and is so well done that itâ€™s not game breaking or negative in any way.

Another thing I liked was the small changes that the developers added to the environment. For instance, the vending machines that you get ammo, weapons, and shields have been modified to look more medieval, sporting fronts that look like stained glass windows. The boxes that you open have also been changed to look like treasure chests and breakable pots (an obvious nod to Legend of Zelda).Â  As I mentioned before, itâ€™s the little changes that were made that make all the difference.

I did have a few issues with the DLC that made it fall just shy of perfect. Probably my biggest complaint was the lack of New-U stations (the place where you respawn when you die).Â  I found myself fighting my way through a massive level, dying, and then spending 5 minutes running back to where I died. While I understand that putting in less New-U stations makes the game harder, it got a little annoying after a while. I also found that the frame rate would slow when there were a lot of enemies onscreen, which wasnâ€™t really game breaking but still very noticeable. 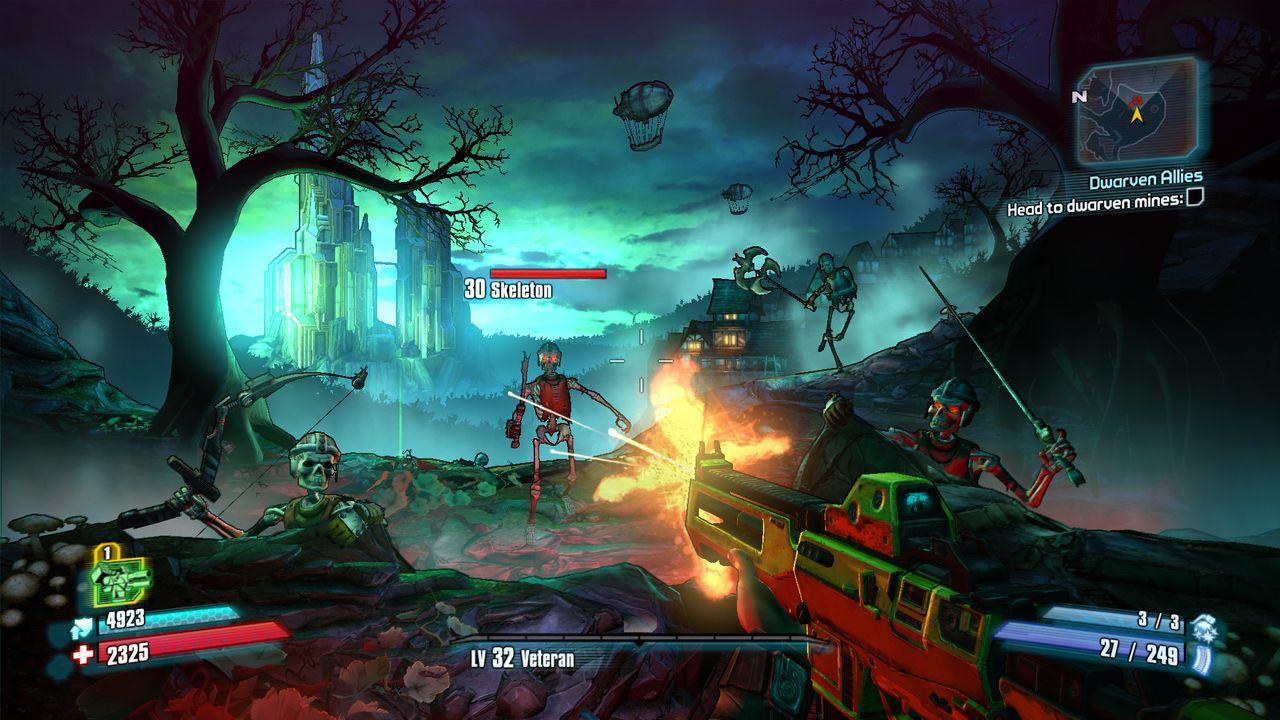 Like the main game, Tiny Tinaâ€™s still totes the beautiful, cartoonish environments that Iâ€™ve come to know and love. The amount of time that was put into this DLC is clearly shown in the character models and landscapes, and itâ€™s nice to see that the developers are still trying to make a quality product as Borderlands 2 reaches the end of its lifecycle. Looking past the occasional frame rate slowdown, Assault on Dragon Keep is a beautiful DLC.

Probably one of the biggest highlights for me was the sound. The voice actors for all of the characters deliver some amazing performances, spewing out a bunch of memorable lines that had me pausing the game to regain my composure because I was laughing so hard. My two favorite performances were given by the actors playing Tiny Tina and Mr. Torgue. Every word out of their mouths had me in stiches and made me fall even more in love with their characters.

While the voice acting was top notch, the sound track is what really caught my attention. Not only was the music epic and awesome, but it also sounded slightly familiar. As I was playing, I would hear the a couple bars from what sounded like something out of Legend of Zelda or Lord of the Rings. It was if the composer of this music made is sound just similar enough to the game/movie to make the player do a double-take. Whether this was intentional or not, it was still a really cool nod to the content that inspired this DLC.

Much like the main game, you can partner up with a friend, or friends, to fight your way through the castle. I played most of the campaign with a co-op partner, and everything ran smoothly. Also, like the main game, the enemies increase in number and difficulty with the number of players playing with you. From what I could tell, it was pretty fair-balanced and not an impossible leap when you added a second player to your roster.

As I mentioned before, the only issues I really found were the lack of New-U stations and the occasional frame rate stutter. Other than that, Tiny Tinaâ€™s was near perfect.

GearBox added a couple cool new weapons to the DLC that were fun to find. One of the most notable additions was a grenade mod that referenced how mages in Live Action Role Play cast spells. When the mod is equipped, your character will yell the spell that is cast (for me, I found a shock grenade mod, so my mechromancer would yell â€œLIGHTENING BOLTâ€) and would fire a straight shot at the enemy in front of you. The developer also added a couple of cool unique Seraph and legendary weapons for the players to find.

Tiny Tinaâ€™s Assault on Dragon Keep is a damn near perfect DLC, and a great way to send off Borderlands 2. I legitimately canâ€™t wait to play it again to see if I missed any references or loot along the way. If youâ€™re a Borderlands 2 fan, this is absolutely a must-buy (also get Mr. Torgueâ€™s Campaign of Carnage, because itâ€™s almost as hilarious as this one).

SpawnCast Co-Host/Creative Co-Director Brian is member of the University of Mary Washingtonâ€™s class of 2012 and graduated with a BS in Computer Science. He has been gaming since the first day he held an original GameBoy in his hands and hasnâ€™t stopped since. He now plays mostly shooters and RPGs on his Xbox 360 but will occasionally work in some sports or fighting games when heâ€™s in the mood. He is also a huge fan of playing marathon sessions of Legend of Zelda when the opportunity arises.
You might also like
Borderlands 2DLCGearBox