Toukiden: The Age of Demons Mega-Review 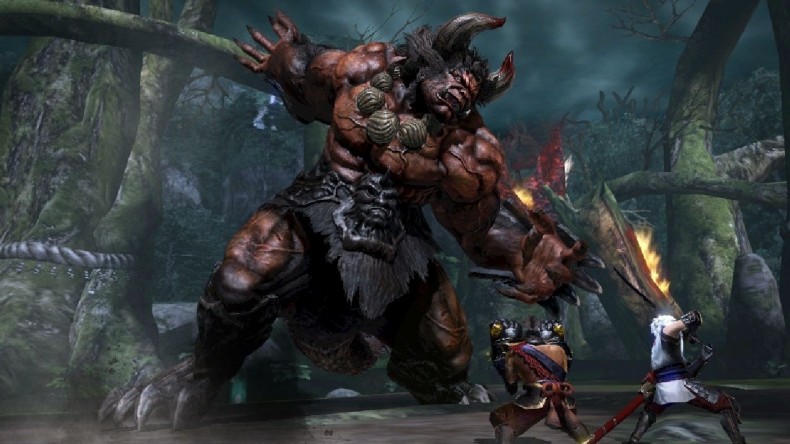 Toukiden: The Age of Demons is a Monster Hunter clone struggling to find its own identity. Its fun, yet familiar gameplay is a strong shining point among tired story lines and repetitive missions. The online support makes it a decent action title for Vita owners or fans of using wet paper swords to cut down increasingly larger opponents.

You are on patrol, watching over a village of your close friends and, more importantly, some of the last humans on Earth, when a giant beast appears before you; one of the fearsome beings known as Oni. With the disembodied voices of those long gone guiding you, you are able to tackle the beast; you slash, dodge and even pray your way through a tough battle, conquering the much larger foe. This is the scale of Toukiden: Age of Demonâ€™s Oni battles, the core gameplay experience thatâ€™ll keep you grinding through repetitive mission after repetitive mission.

Humanity has been pushed to the brink by the overwhelming force of the Oni, a race of beasts who survive by devouring the souls of human and range from small to “holy crap this guy is huge”. You are a slayer, part of a group whose sole purpose is to protect humans from the imminent threat Oniâ€™s pose. That scenario sounds interesting on paper but plays out through generic character archetypes and droning, uninteresting dialogue. A wide majority of the exposition is told through a homework assignment, multiple encyclopedia entries for all relevant terms, ages and so on. This removes you almost immediately from the story, characters and plot making it difficult to care when characters whose names you donâ€™t know begin bickering about who has the more depressing backstory, longest sword or who’s going to win the next season of American Idol.

You design a character, select a weapon (which you donâ€™t need to get attached to) and then youâ€™re off to the racesâ€¦ several scenes later. The game is hub based, you accept missions, upgrade armor and weapons, and enhance mitama (a cool new take on weapon customization) all from a town hub. Once you accept your mission you head out with a party of NPCs all specializing in a different weapon type and mitama focus. Missions donâ€™t vary a lot; you get to choose between: kill this many of this thing, kill this thing and kill all of the things. These missions get repetitive quickly, especially when you donâ€™t have a lot of ages (or stages) unlocked in which to battle. Typical combat feels weak and ineffective, but that may just be par for the course in this type of Action RPG. I used dual knives for the majority of my gameplay, the weakest weapons by far in terms of attack power, but after trying out other weapons my damage output never seemed to increase by a lot. The increased damage of other weapons trades off with speed so overall youâ€™re probably doing the same amount of damage, especially in Oni battles. That being said, the Oni boss battles redeem all of the slow pacing and ineffectual weapons by adding a demand for precision strikes and tactical awareness.

The AI is forgettable and doesn’t often contribute aside from perhaps the Healing class character. In standard missions they swamp the same target as you, further adding to the ineffective feel of combat. They also feel useless in fights against the Oni except as distractions, since they spend a lot of time being knocked around or stunned. Their generic banter would be more appreciated in English since it requires extra attention to read the text during battle.

This is where the game will win over skeptics and turn fans into cult followers. The Oni battles are large scale fights where the stakes are higher than ever and your tactical decisions will be put to the test. Oni are large beasts that can only be conquered by eliminating all body parts so you can truly deal damage. The battle requires managing your focus gauge, appropriate mitama selection for your fighting style, and the ability to precisely target certain parts of your opponent. These battles can drag on but they are filled with exciting moments, rewarding combat and, in online matches, impressive teamwork.

These are cool new ways to customize abilities. They are the lost souls of soldiers killed suddenly in battle. When equipped with a weapon they give you a new ability set, passive boosts and elemental bonuses. You can choose to focus a weaker weapon like the dual knives with a strength mitama or the glove gauntlets with recovery since you take a lot of damage at close range. Ultimately it allows for even more customization, letting the player decide between covering weaknesses or doubling up on strengths. You can aslo upgrade your favorite mitama, further increasing the gameâ€™s complexity and depth.

Before we wind up the written review, let’s check in with SlasherJPC and get his two cents on Toukiden. Did he like it? Did he love it? The only way to find out is to watch his video review m’dears!

The game may be underwhelming by Vita standards but it definitely looks nice. The cut scenes are gorgeous and the battle effects add a lot of personality to the game. The effects also make it easy to follow the flow of combat when multiple AI or players are battling a large Oni all at once.

Largely forgettable, the voice acting is decent but the Japanese only audio keeps it from hitting its full potential. The epic music during Oni battles keeps the blood pumping.

Largely dependent on the quality of its online community, itâ€™s rare that a game can lean on its multiplayer. Toukiden is no exception. Even though taking down Oni as a team can be exciting, itâ€™s hardly a selling point on its own. Combat often devolves down to all players mugging one enemy, erasing the combo work of dedicated players, or all players fighting separate foes creating an experience very similar to offline play.

The game does not offer a lot by way of extras, but the vast backstory and history of the world Omega Force has created can be considered an extra experience not integral to core gameplay. There is also some DLC available in the way of extra missions, new costumes and other collectibles.

The longevity of the game depends on whether or not you find ineffective attacks boost gameplay or hinder it. Long combos are needed to kill most enemies even with stronger weapons and increasingly repetitive missions keep chapters running a little too long. The ability for deep customization in a variety of different combinations will keep true RPG fans playing for a long time.

Toukiden: The Age of Demons is a Monster Hunter clone struggling to find its own identity. Its fun, yet familiar gameplay is a strong shining point among tired story lines and repetitive missions. The online support makes it a decent action title for Vita owners or fans of using wet paper swords to cut down increasingly larger opponents.

Contributor John is a third year journalism major and a fifth year policy debater, but gaming is his passion. He firmly believes that the PS2 is the finest console ever made and will defend to the death that playing Pokemon is not and never was lame. He owns every current gen console and is excited for the advent of the PS4 and Xbox One. He enjoys action-adventure and survival horror, but can hold his own in a discussion about nearly any genre. He listens to a surprising amount of alternative music and can fix a mean bowl of Frosted Flakes.
You might also like
ActionJRPGRPG