Typing of the Dead: Overkill Review 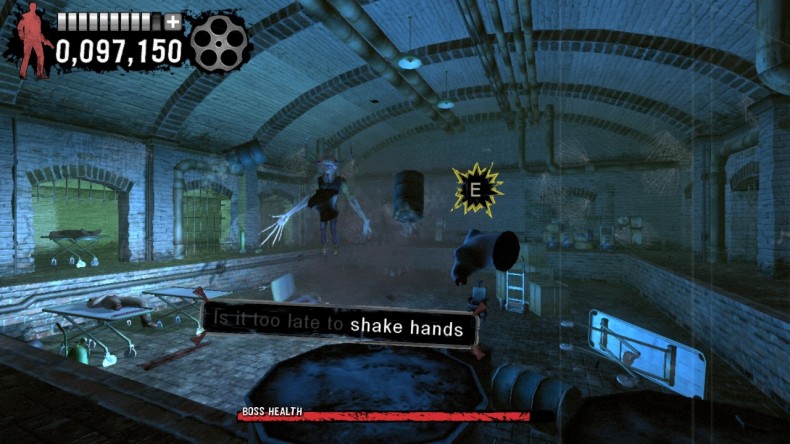 Offensive humor is not for everyone, outdated graphics, odd sound bug, the final boss, weird glitch doesn't spawn an attack phrase, mini-games have no leaderboard support

Players who don't mind an excessive amount of blood, profanity, and violence will find much fun in Typing of the Dead: Overkill. The game is addictive, simple fun despite a few minor issues, though the possible bug, while just barely staying away from game-breaking, could be a turn-off for players who want bragging rights on the leaderboard. What is most surprising to me is how well the shooter version played on the PC. While it isn't the exact same experience, I would be happy to see older rail-shooters, like the Wii's Resident Evil Chronicles, head to computer gaming. Until then, both modes of Overkill will tide me over.

As a writer/critic for SpawnFirst, there are two things that I tend to spend a great amount of time doing: typing and killing zombies.Â  Since zombies are second only to Russians as the go-to bad guys in the entertainment industry, developers need to get creative if they plan to use this tired idea.Â  Modern Dream found a way around this by combining the concept of a typing trainer with a Wii rail-shooter and somehow managed to find success with this oddball idea.

Anyone who has ever played a House of the Dead game before Overkill knows the writing and story aspects of the series are nothing short of atrocious.Â  With a full understanding of this, Sega decided to keep make the writing as bad as possible for self-aware comedic value while emulating the feel of a 70’s grindhouse movie, goofy narrator included.

The game follows Agent G and detective Isaac Washington as they team up, clichÃ© buddy cop style, in order to capture Papa Caesar, an evil scientist who is turning people into zombies.Â  The game practically goes through the book of overused clichÃ©s from start to finish and even contains small details within the environments or cutscenes.Â  For example, like in an actual low-budget 70’s film with bad editing, a character’s glasses are slapped off his head, but two camera cuts later they are back on his face.

The story is dumb, vulgar, written extremely poorly on purpose, and is often hilarious.Â  There will be at least something here that will make anybody laugh out loud, but when I said vulgar, I mean it is one of the most vulgar games I have ever played.

Harsh profanity is now common-place in games, a sign of maturity if done properly, but in Typing of the Dead: Overkill, it is done far too much.Â  I’m not going to sugarcoat it, I swear quite a bit myself and am an expert on colorful adjectives, but it stops being funny quickly and becomes grating.Â  The constant use of one word in particular would make even Quentin Tarantino uncomfortable after a while.

So despite the ensuing hilarity of the story, it is also extremely vulgar, disgusting, and offensive.Â  I advise watching an uncut trailer of this if you are unsure about purchasing. Gameplay is very simple, yet surprisingly fun and addictive.Â  Whenever a zombie or monster comes on screen, a word or phrase is designated to that enemy and correctly typing the phrase kills the zombie.Â  It’s like what Robert Rodriguez sees when he boots up Microsoft Word.

The game contains nine levels of decent length and a good difficulty curve.Â  Phrasing difficulty increases with each level and every now and then a new zombie type is introduced.Â  The long distance and exploding zombies are the only two to require players to change strategies, but it’s better than seeing the same enemy models over and over again.

Health and bonus items can be picked up in the various stages by pressing the tab key and switching mid-phrase is done by pressing backspace.Â  Performing these actions is not difficult, but the game barely mentions these functions on the first level and never looks back.Â  I did not notice the text because of attacking zombies and the controls menu does not explain keyboard controls either.

When multiple enemies are inbound, sometimes it can be difficult to tell which phrase is associated with one of the enemies.Â  There were many times I would find myself attacking the wrong zombie and get hit by another.Â  It’s a little annoying, but only one zombie will attack at a time so that players have the chance to counterattack.

Typing quickly and accurately builds up a score multiplier for anyone who is interested in etching a spot on the leaderboard.Â  This is easier said than done since mistyping too many times kills the combo as does getting hit.Â  For those looking for even more of a challenge, hardcore mode is unlocked after completing the game which stops the combo and changes the phrase with every mistake.

The story isn’t the only comedic piece of the game, the strange phrases juxtaposed to zombies are hilarious as well.Â  Some phrases are just random words that create a humorous result while others are references;Â  I found one alluding to Sonic the Hedgehog and another to Half-Life 2.Â  Even amongst the gore and profanity, I am still unable to get away from “What does the fox say” unless I want to see what does the zombie eat. Despite the strangely addicting nature of the gameplay, there are a few nasty blemishes to be found.Â  One enemy in particular turns the game into a typing fistfight that kills the game’s pacing completely and rewards players with one of the same three boring animations upon completion.

The last boss tries to shake things up a bit by having the player type as many words as possible in relation to a theme, but I was never quite sure if what I was typing was accepted by the programming.Â  Even when it said I found the secret word, the effect was minimal at best; the finale wasn’t a bad idea, just executed poorly.

For those who read my Battlefield 4 review, you know I have zero tolerance for game killing bugs and problems.Â  Overkill comes close to having a bug that almost entirely kills the game by not assigning a phrase to an enemy.Â  The only way to get away from this is to either restart the entire level or let the zombie kill you, then continue with a score penalty; I chose the latter.

The bug is very annoying and is not endearing like the bug where an active enemy accidentally falls down a hole when he wasn’t supposed to.Â  Luckily, the bug is very rare, only happened twice through two entire playthroughs, and there is a way around; except for maybe somebody aiming for the top of the leaderboard.

When players are done typing, the original House of the Dead: Overkill is also available to play with either a mouse or a controller.Â  I have nasty memories of trying to play a light gun game with a controller and opted for the mouse.Â  Essentially it plays the same as its Wii counterpart, sans Wii remote, and still manages to be fun.

My only problem with House over Typing is the bosses, before buying or upgrading stronger weapons, take a long time to kill.Â  In Typing of the Dead, bosses quickly fell before the might of a Logitech .50 Caliber Keyboard.Â  Considering there are two games with multiple difficulties and unlockables, Overkill can keep gamers busy for a while. Considering this is a port of a Wii game, expectations on graphics should not be high; the graphics are neither bad nor good, just average.Â  The graphics get the job done even though the animations are weird and a little overdone.

The sound design is on the same level of the graphics; they get the job done and that’s it.Â  There is a bug that drops the sound when fighting one of the special zombies, but it’s a minor annoyance that fixes itself after the fight.Â  My only problem with the sound design is the game runs out of music about three-fourths of the way in and reuses the same tracks too much.

Overkill contains three mini games for both versions that are fun, though the carnival game is extremely easy in type mode.Â  For some strange reason, these games don’t have leaderboard support so there is no point to playing them except for the achievement.Â  Players can also create a custom dictionary so their own phrases can be used against the undead in-game which is actually a fun idea. Players who don’t mind an excessive amount of blood, profanity, and violence will find much fun in Typing of the Dead: Overkill.Â  The game is addictive, simple fun despite a few minor issues, though the possible bug, while just barely staying away from game-breaking, could be a turn-off for players who want bragging rights on the leaderboard. Â What is most surprising to me is how well the shooter version played on the PC.Â  While it isn’t the exact same experience, I would be happy to see older rail-shooters, like the Wii’s Resident Evil Chronicles, head to computer gaming.Â  Until then, both modes of Overkill will tide me over.

Former Contributor Chris West is a graduate of Texas Tech University where he earned his BS in Electronic Media in Communications. Chris has been passionate about games since he was a kid and today prefers games with a strong narrative. He also has a soft spot for horror games, legitimately scary games mind you, and any game claiming to be challenging, Dark Souls for example. When he isn't playing games, he is pursuing his other passions: music and photography. Chris can play both guitar and bass and then take high quality pictures of the performance with his camera. In the end, Chris enjoys writing about his passions and ideas, when he isn't destroying his friends in Call of Duty.
You might also like
PCreviewSpawnFirst